Description. Male (fig. 1): Body ovate, length 5.47. Carapace width 3.48, with scattered denticles including single median denticle on anterior margin with one or two denticles along anterior margin on either side, one of which forms the anteriormost denticle of a longitudinal row of three pairs of denticles anterior and lateral to eyemound; clusters of denticles at anterior and posterior corners and on dorsolateral margins of prosoma between insertions of legs II and III; single denticles at each end of elongate ozopores, and transverse rows of denticles across metapeltidium and marking anterior margin of mesopeltidium. Eyemound with three pairs of large denticles. Opisthosomal surface granulate; tergites with transverse rows of denticles; posteriormost tergites with minute setae only. Venter unarmed, with black setae only. Chelicerae (fig. 1c) short, robust, length of first segment 1.19, second segment 2.43; first segment with dense cluster of denticles dorsodistally, longitudinal row of denticles ventrolaterally; second segment unarmed, with scattered black setae dorsally. Pedipalp (fig. 1d) length of femur 2.04, pedipalp 0.96, tibia 1.08, tarsus 2.11; cluster of prominent bristle-bearing nodules on pedipalpal coxa directly below insertion of trochanter; numerous denticles present from trochanter to proximal half of pedipalp, particularly in irregular longitudinal rows dorsally on femur; well-developed short rounded-triangular apophysis present distomedially on pedipalp; numerous black setae present along entire length of pedipalp, plumose setae absent; microtrichia present along entire length of tarsus only. Legs of moderate length (BLI 1.47), with denticles on anterior and posterior faces of trochanters, longitudinal rows of denticles from femur to tibia, with rows on tibia surrounded by microtrichia becoming more extensive distally; metatarsus of leg I with few small denticles ventrally, metatarsi and tarsi otherwise unarmed except ventral pairs of spine-like setae at distal margins of pseudosegments; femora and tibiae with pseudosegments absent. Length of femur I 5.10, femur II 8.08, femur III 5.01, femur IV 5.53. Penis (figs 1e–g) with banana-shaped glans, distal profile acute, point of reflexion of posterior margin in lateral view close to midpoint, slightly proximal; shaft flattened over most of length, broadening slightly towards distal end with weakly sclerotised margins, with bulbous base.

Comments. The specimen illustrated in figure 1 demonstrates some of the difficulties currently attending identification of Afrotropical harvestmen. Only one species of Phalangiidae   has been recorded from Angola to date, Rhampsinitus quadridens Lawrence 1949   , to which this specimen cannot be assigned. It seems likely that it represents a species new to science but one that cannot readily be placed to genus at presence. For this reason, and because of the availability of only a single specimen, no formal description is offered at present.

The penile morphology of the Caconda specimen places it firmly in the ‘banana-shaped glans’ group, with the glans closely resembling that of Cristina crassipes Loman 1902   ( Staręga 1984, figs 9–11). However, it differs from Cristina   species in lacking the enlarged and incrassate first pair of legs of that genus. Species of Guruia   have a glans that is more sinuous at the base and more rounded in the distal profile ( Staręga 1984). Camerobunus okucola Staręga & Snegovaya 2008 has small denticles on the cheliceral lamellae, unarmed pedipalps and the shaft of the penis less broadened apically. Perhaps the closest of the genera of this group named to date is Megistobunus   which Staręga (1984) also described as having a genital morphology similar to that of Cristina   . Of the species currently included in Megistobunus   , M. longipes Hansen 1921   and M. lamottei ( Roewer 1959)   have much longer legs relative to body size, and pedipalps with a patellar apophysis that is longer than the main body of the patella. Nevertheless, a number of the features distinguishing the Caconda specimen from Cristina   and the aforementioned Megistobunus   species (such as development of the first legs and pedipalpal apophyses) are related to secondary sexual dimorphism. Determining the significance of these features, and hence their importance for the generic placement of the Caconda specimen, would require a better understanding of relationships between the species concerned than exists at present.

The Caconda specimen does bear an overall resemblance to Megistobunus funereus Lawrence 1962   from eastern Tanzania, except that M. funereus   lacks denticulation on the carapace anterior to the eyemound and has far fewer denticles on the pedipalp. However , Lawrence’s (1962) original reasons for assigning this species to Megistobunus   are not clear. It is not identifiable as such using the key to Afrotropical phalangiid genera provided in the same publication, and its inclusion in the genus was regarded as doubtful by Staręga (1984). The genital morphology of M. funereus   has not yet been described, and confirmation of its placement awaits further examination of its type material. 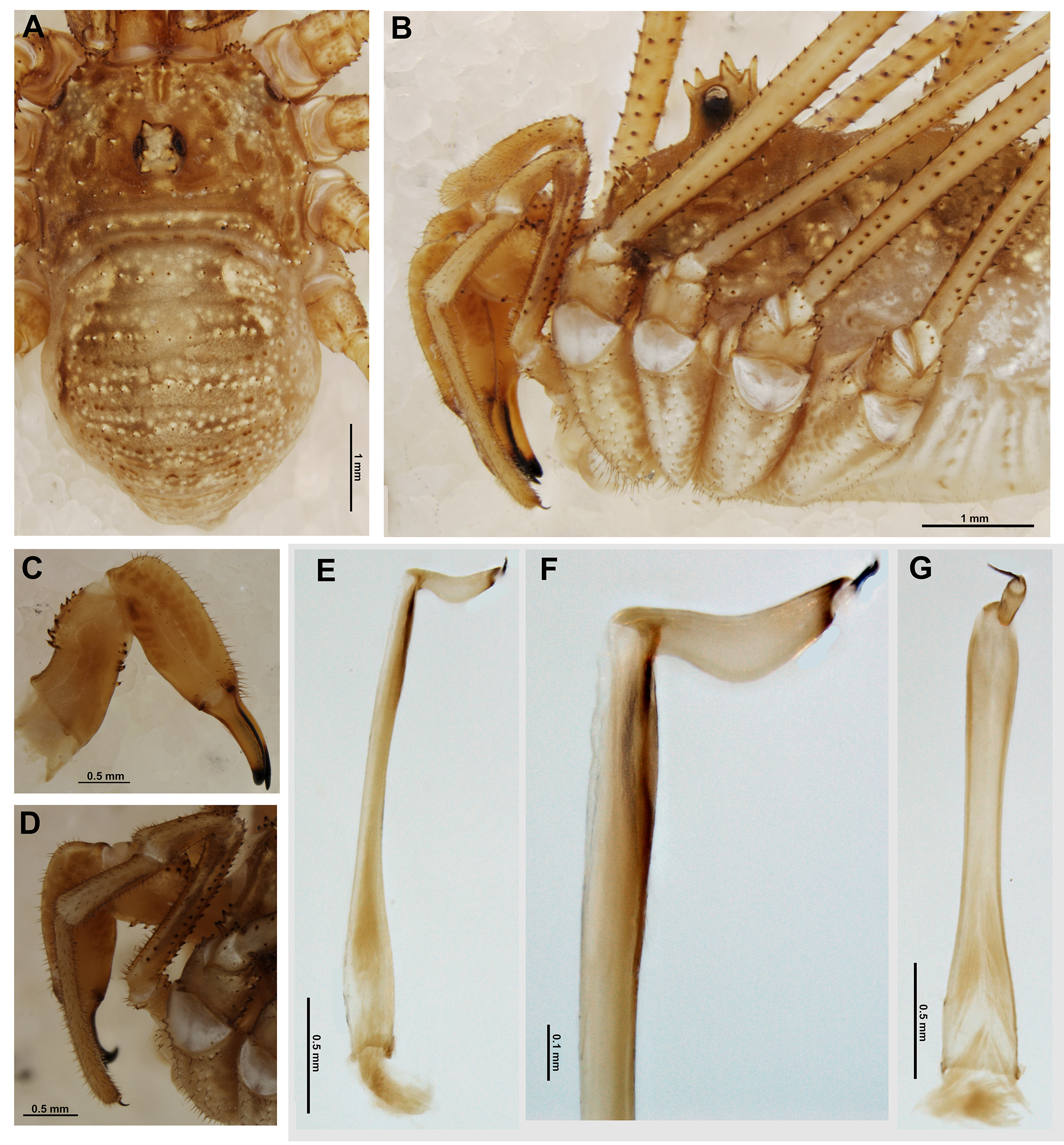