Description. Counts and measurements for the holotype and 12 paratypes given in Table 1 View TABLE 1 . An elongate, moderately shallow-bodied species (BD 23.4–26.2, mean 24.7 % SL), with a large mouth and sleek form characteristic of an open-water piscivore. Greatest body depth at about base of fifth dorsal fin spine. Head length 31.0– 33.7, mean 32.4 % SL. Head profile slightly convex, rising smoothly to dorsal fin base.

Gill rakers ( Fig. 3 View FIGURE 3 a). Slender, elongate, and non-denticulate, with up to four subsidiary branches. Thirteen to 16 gill rakers along outer row of first gill arch. No rakers present on hypobranchial, 10–12 rakers along ceratobranchial, sometimes single raker in angle of arch, and 3–4 rakers on epibranchial.

Coloration. In life, background body color brownish-tan, with three broken white to silvery-blue stripes composed of irregular blotchy spots. Superimposed over this pattern are three rows of seven to nine large, dark-brown spots stretching from above opercle to caudal flexure. Large spots irregular, with intervening space between them horizontally about as large as the spots. Vertically, some spots merge together partially, though some are staggered irregularly resulting in misalignment between horizontal rows. Largest spots in lower row, which is superimposed over the lower branch of lateral line at about center of flank, while middle row of slightly smaller spots is superimposed over upper lateral line branch. Top row of spots sits along dorsal fin base, with spots stretching partially onto dorsal fin. Opercle with a patch of lavender and a black blotch posteriorly, belly white, eyes with bright yellow dorsal and ventral bordering. Bluish-white, thin line running below eye from lachrymal to whitish patch on cheek. All fins with bright yellow; dorsal, anal, and caudal fins with rows of large yellow maculae interspersed with small patches of white. Yellow maculae blend together vertically to form series of yellow bands. Pectoral fin pale yellow on the base. Preserved coloration a uniform, light yellow-tan with brown spots in pattern described above. No sexual dimorphism in coloration.

Ecology and behavior. ( Fig. 5 View FIGURE 5 ). Ecology and behavior of the holotype and paratypes was not recorded. However, these aspects of the biology of Lepidiolamprologus mimicus   n. sp. were studied at Kasenga from 1993 to 2006. Underwater observation during the period and analysis of stomach contents of samples revealed that this species was exclusively piscivorous and mainly preyed on young and sub-adults of cyprichromine cichlids. In the littoral region of Kasenga, four species of cyprichromine ( Cyprichromis leptosoma   , C. zonatus   , C. coloratus   , and Paracyprichromis brieni   ) form mixed-species schools composed of various subgroups of age or sex of each species in open water 1–4 m above the rocky substrate ( Takahashi et al. 2002, 2006). Usually L. mimicus   n. sp. stalked solitarily near or mingled in the school at a depth of 10 m or more, and attacked mainly young and juveniles of the school. At least 30–40 individual hunts were observed. When hunting, adults of L. mimicus   n. sp. changed their body coloration markedly from dark-brown to pale beige; their characteristic dark-brown spots disappeared and rows of fine silver dots on the flank faded, but the yellow anal fin and black dotted line at the tip of the dorsal fin remained. This coloration generally looked like that of female cyprichromines and specifically very much resembled that of female Paracyprichromis brieni   . The degree of resemblance in coloration of L. mimicus   n. sp. to its prey during hunting was greater in young and sub-adults than adults ( Fig. 5 – 3 View FIGURE 5 , - 4), and the predominant prey were young and juveniles of Paracyprichromis brieni   , with small Cyprichromis   making up the balance. These phenomena indicate both that L. mimicus   n. sp. is highly specialized to forage on cyprichromine fishes and also that its coloration, especially Collection localities of Lepidiolamprologus mimicus   Holotype locality represented by open circle.

Mating and breeding of L. mimicus   n. sp. have not been observed despite the long-term underwater survey from 1993 to 2006. However, on two occasions, pairs were observed roaming together for several days around the same area at a depth of 20– 25 m. In both cases, the pairs were wandering around a boundary between rocky and sandy substrate, and sometimes inspected holes or crevices among boulders, but did little foraging.

After the pairs were caught by gill-net underwater, gentle pressure on their abdomens made the males eject semen and females eject mature eggs. These observations suggest that L. mimicus   n. sp. is a monogamous species like L. elongatus   and L. attenuatus   , and not a harem species like L. profundicola   (for breeding habit of Lepidiolamprologus   , see Kuwamura 1997). It also seems that they breed in rather deep water (more than 30 m) beyond the reach of a diving survey. Mature males and females were usually caught with gill-nets in deep water from 20 m to 50 m depth.

Distribution. (Fig. 6). Zambian coast of Lake Tanganyika from Kasenga to Kapembwa. The west side of Chituta Bay, the type locality, is characterized by a steep rocky shore starting in the south at the west side of the mouth of the Lunzua River, with usually poor visibility (<10 m). From the river mouth, where the rocks run to about 5 m depth, the depth of the rocky slope increases steadily until the point at Kasenga village where it is approximately 50 m deep. Specimens of Lepidiolamprologus mimicus   n. sp. were collected as solitary individuals wandering across the steep sloped rocky habitat, comprised of large rocks and rock slabs (some several cubic meters). Other Lepidiolamprologus   occurring sympatrically in Chituta Bay are L. cunningtoni   , L. kendalli   , L. elongatus   , L. attenuatus   , and L. profundicola   . Only L. nkambae   is absent. According to Konings (1988; page 188 and photo on page 121), Lepidiolamprologus mimicus   n. sp. also occurs in central Tanzania.

Etymology. The specific name, mimicus   , is from the Latin, in reference to the specific feeding ecology involving imitative coloration described herein.

Mimicry in its various forms is fairly widespread in marine fishes ( Randall 2005; Moland et al. 2005). A common form is aggressive mimicry, in which a predatory species resembles a harmless species, allowing it to avoid detection when approaching prey ( Wickler 1968). In addition to the numerous marine examples, several tropical freshwater characids, citharinids, and cichlids have been recognized as aggressive mimics ( Sazima 2002). Within Lake Tanganyika, aggressive mimicry has been described in scale-eating perissodines ( Yanagisawa et al. 1990; Hori & Watanabe 2000), but this is the first case observed in lamprologines. Interestingly, the abundant schools of brightly-colored Lake Tanganyika cyprichromines are subject to aggressive mimicry from two independent cichlid lineages. Color morphs of Perissodus microlepis   with yellow anal fins insinuate themselves into schools of cyprichromines to feed on scales, while yellow-finned Lepidiolamprologus mimicus   n. sp. blend into schools to pick off whole fish. 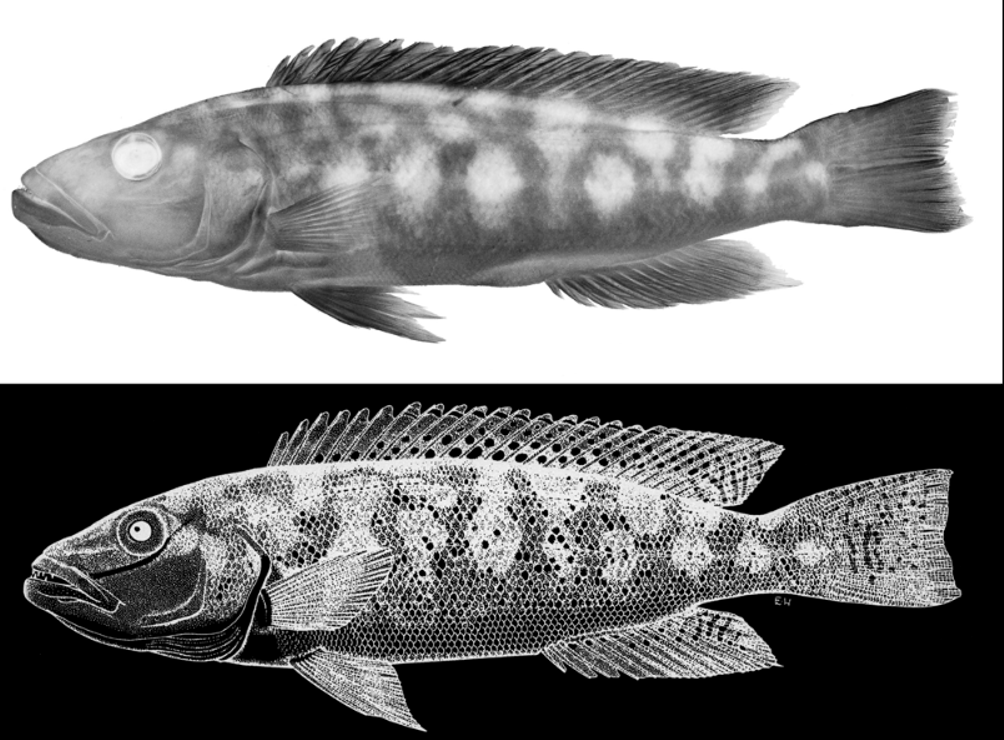 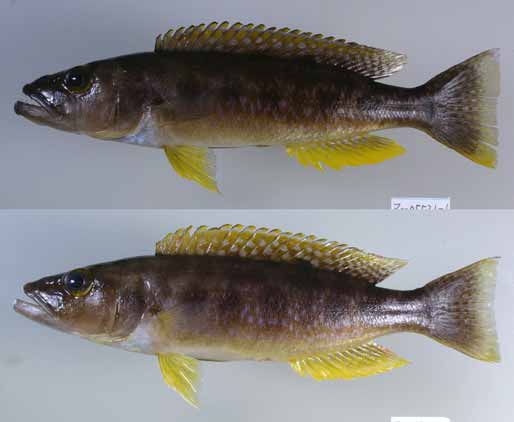 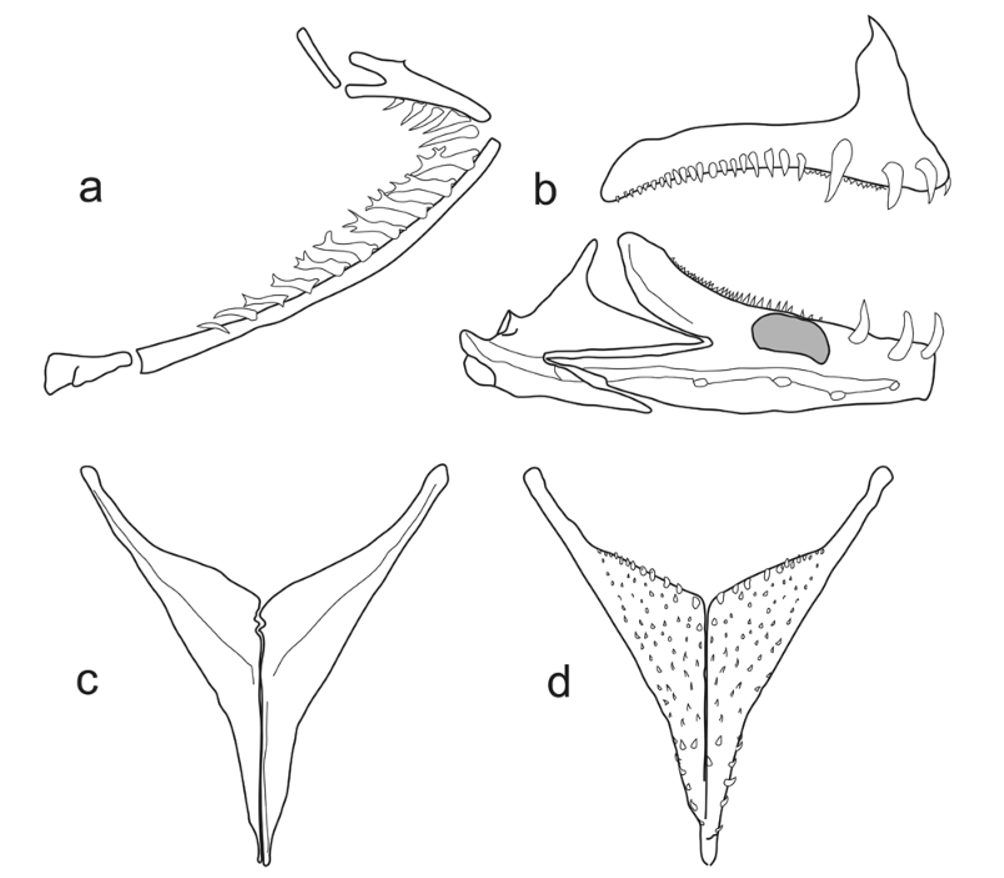