Description. This description is based on observations of nine specimens with the aid of dissecting microscope; three were mounted in toto for overall observation under the compound microscope; two were dissected for internal anatomy. Type series are small worms with a length of 2–5 mm, including the introvert ( Fig. 1 View FIGURE 1 A). Introvert slightly longer than the trunk. Skin smooth and translucent. Colour cream in preserved worms, somewhat darker at both ends of the trunk. Elongated bulbous papillae, 17–35 µm tall ( Fig. 1 View FIGURE 1 E) on the anterior part of the trunk. Triangular shaped holdfast papillae ( Fig. 1 View FIGURE 1 B, D) 50–100 µm tall, scattered in the middle of the trunk region. The free edges of the holdfast papillae are pigmented in brown colour and directed towards the anterior end of the body. A prominent tooth-like projection or spine is well developed in the larger holdfast papillae ( Fig. 1 View FIGURE 1 B, D). They are 7–35 µm tall and 7–18 µm wide at the base. At the trunk end there are conspicuous digitate papillae about 10 µm high ( Fig. 1 View FIGURE 1 F). Small scattered, spine-like hooks about 20 µm in height ( Fig. 1 View FIGURE 1 C), slightly curved at the end. Tentacles absent, not developed. Internally, the longitudinal musculature is continuous. A single fused retractor with two or three roots attached to the trunk end ( Fig. 2 View FIGURE 2 A –B). Esophagus detaches from the retractor prior to any subdivision. Gut organized in a few loose loops. Rectal caecum not observed. A single nephridium is present on the right side of the nerve cord and it is attached to the body wall for most of its length. Nephridiopore behind the anus. Ventral nerve cord ends just before the attachment of the retractor muscle. Gonads not observed.

Etymology. The subspecific epithet denticulatum refers to the presence of tooth-like projections in the free border of the holdfast papillae.

Remarks. The studied specimens show a single retractor divided only at the posterior end with the esophagus detaching from the retractor column before any division. Those taxonomic characters correspond to the subgenus Montuga Gibbs 1985   . At present, this subgenus contains only two deep-water species: Phascolion lutense Selenka, 1885   and P. pacificum Murina, 1957   . The presence of hardened holdfast papillae along the midtrunk area relates the studied specimens with the last species. However, there is a distinctive feature distinguishing the collected specimens from Phascolion pacificum Murina, 1957   : the presence of a prominent tooth-like projection or spine in the median part of the free border of the holdfast papillae. Our interpretation is that this anatomical character denotes a subspecific status from the nominal form.

Cutler & Cutler (1985) and Cutler (1994) noted different morphs in Phascolion strombus (Montagu, 1804)   , which were interpreted either as race circles within the species, or cryptic species within a large “superspecies”. In fact, recent studies combining molecular and morphological techniques demonstrated a large potential of sipunculans to hide cryptic or pseudocryptic species ( Kawauchi & Giribet, 2010; Kawauchi & Giribet 2013, Schulze et al., 2012). There is no doubt that the application of molecular data would shed more light on the relationships among all taxonomic conflicts in this phylum. Phascolion pacificum Murina, 1957   , is also a good candidate for molecular analysis, since contradictory anatomical data in different separate populations were observed (see for a compilation Saiz Salinas, 1993), relating to the presence/absence of tentacles and the shape of holdfast papillae.

Stephen & Edmonds (1972) used several times the presence/absence of teeth in the attachment papillae in their key to identification of species of the genus Phascolion   . Later on, Cutler & Cutler (1985) restricted the use of tooth-like projections or spines in the free border of the holdfast papillae to Phascolion (Lesenka) collare Selenka   & de Man, 1883, in which there are cases of 1–4 tall strongly chitinized teeth/points on the holdfast papillae. Phascolion (Montuga) pacificum denticulatum   can be easily differentiated from P. collare   by the subgeneric character: retractor column divided only at posterior end vs. complete fusion of the retractor muscles in P. collare   .

From the several species characterized in Stephen & Edmonds (1972) with pointed tips on the holdfast papillae, one, P. ikedai Satô, 1930   is externally similar to our proposed subspecies. The validity of the species was under suspect in several revisions of the Japanese material of Sipuncula ( Cutler & Cutler, 1981; Cutler et al., 1984). Finally, the species was moved to the list of Incertae Sedis or Species Inquirendum in the review of the genus Phascolion   by Cutler & Cutler (1985). The main differences of our proposed new subspecies and P. ikedai Satô, 1930   are: (i) the minute body size; (ii) the absence of tentacles; (iii) and the place of the nephridiopore in relation to the anus: behind in P. pacificum denticulatum   vs. far anterior to the anus in P. ikedai   .

Finally, we would like to emphasize that we are reporting here for the first time the presence of one Phascolion   species in all waters around the vast Indian coast. This paucity in recording species of the genus Phascolion   in the central part of the Indian Ocean has been related with the lack of suitable habitats for these worms ( Cutler, 1994). Empty mollusc shells and void calcareous tubes appear as convenient shelters for many phascolionids. Whether the Indian coasts exhibit a lesser availability of this kind of protective habitats in comparison with other areas worldwide, or this ecological niche is occupied more efficiently by other faunal competitors, such as the anomuran crustaceans, remains to be investigated. 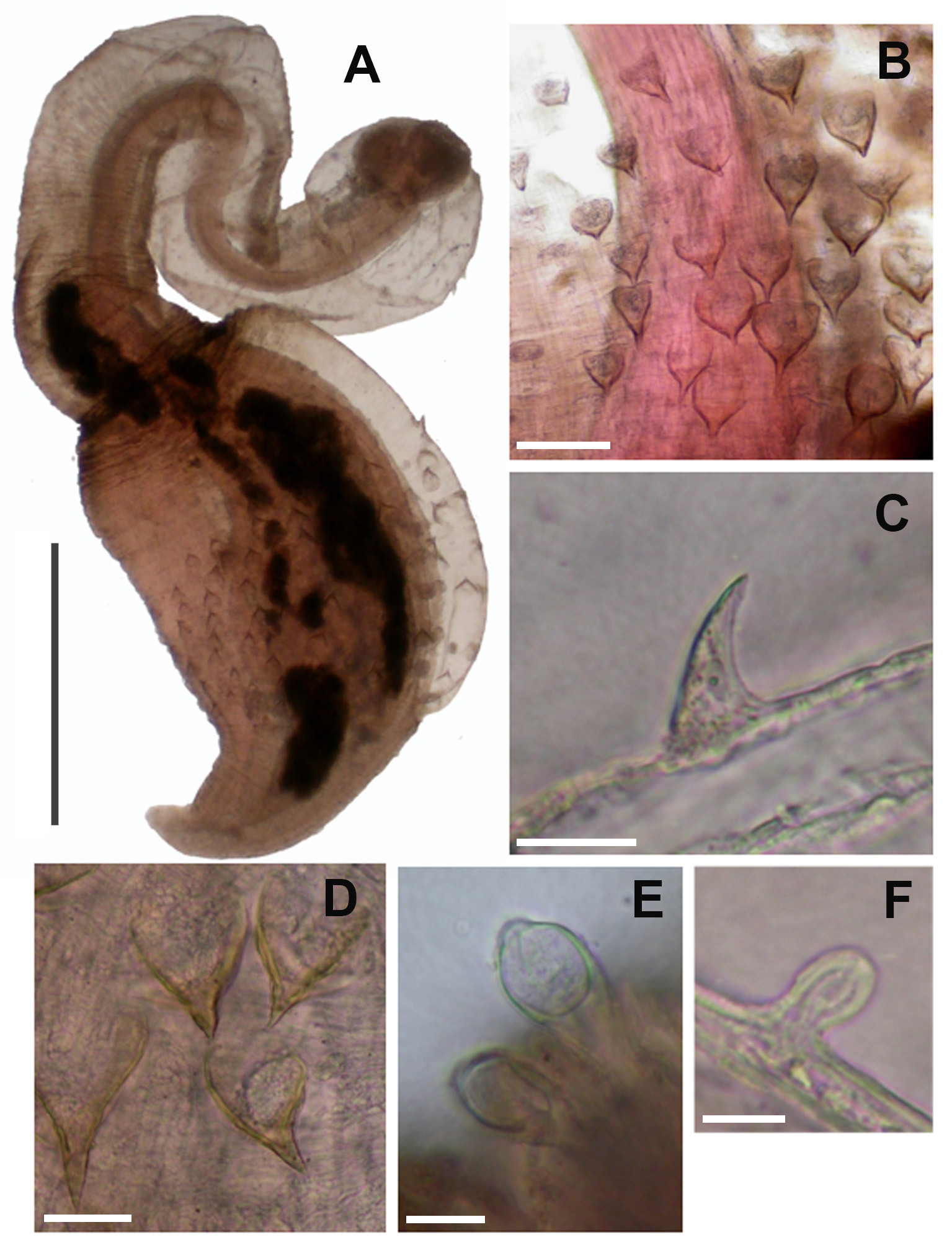