Head nearly semicircular, clypeus regularly rounded. Head on surface with two shallow depressions near anterior margin, and a groove along inner side of each eye. Punctation comprising sparse, regularly distributed very small punctures (denser in depressions). Distance between punctures about twice the diameter. Microreticulation consisting of weakly impressed polygonal meshes with diameter smaller than that of punctures.

Pronotum subparallel in dorsal view, except for anterior angles; maximum width near midlength. Lateral beading distinct, regular. Pronotum with a line of coarse punctures along anterior margin, and with coarsely punctured shallow posterolateral depressions. Disc of pronotum with sparse and fine punctures, their diameter slightly bigger than those on head, distance between punctures about two to three times as large as their diameter. Microreticulation similar to that of head, almost imperceptible.

Elytra with maximum width in basal third, almost straight between anterior and posterior thirds, then tapering to apex; marginal rim visible at shoulders in dorsal view. Elytral disc with two rather indistinct punctured lines and with quite regularly distributed smaller punctures between these lines. Distance between punctures slightly bigger than their diameter.

Differential diagnosis. The new species is most similar to H. anatolicus . It can be distinguished by the elytra being less tapered to apex, a subparallel pronotum with the maximum width near the midlength, a shiny dorsal surface in females, and the shape of the median lobe. The apex of the median lobe is broader and clearly curved to the left in H. kurdistanicus sp. nov., whereas it is very thin and almost straight in H. anatolicus .

Etymology. The name is derived from “Kurdistan”, an ancient region inhabited predominantly by the Kurdish tribe, recently divided between Turkey, Iran, Iraq and Syria.

Habitat. Collected in seepage of a stream with a gravel bottom. Distribution. So far known only from two close localities in Van province, south-eastern Turkey ( Figure 6 View Figure 6 ).

Before the main analysis of differences in body shapes between the taxa recognized above, shape differences between males and females were tested to explore the influence of sex on body shape, using a permutation test for two multivariate groups. Although the analysis was limited by a low number of specimens available for the study, significant sexual dimorphism in body shape was found in H. bodemeyeri bodemeyeri and H. anatolicus koksali , in which males are characterized by relatively smaller pronota in comparison with females ( Figure 3B,E View Figure 3 ). Differences between sexes were insignificant in H. bodemeyeri guignoti , H. b. cariaensis and H. a. anatolicus , and could not be reliably tested in H. cuprescens and H. kurdistanicus in which too few specimens are available for study ( Table 1).

Sexual dimorphism in some taxa suggests that males should be analysed separately from females to obtain reliable data on body shape differences between the species/ subspecies. However, such a subdivision into males and females causes a decrease in the number of specimens within each group, which could bias or totally rule out statistical analyses in some taxa. For this reason, two parallel analyses were performed: (a) without distinguishing sex (i.e. resulting in larger groups but not reflecting the sexual dimorphism in some taxa); and (b) with sexes subdivided within each taxon (i.e. resulting in smaller groups ruling out the statistical analysis in some pairs of taxa).

CVA was applied to the scores of the first 10 relative warp axes, covering 98.51% of the shape variation ( Figure 4A View Figure 4 ). The first canonical axis clearly separates the specimens into two groups (two-group permutation test: p <0.0005, with no specimens wrongly classified using discriminant analysis). Group A (“ anatolicus – kurdistanicus group”), characterized mainly by a larger pronotum and slightly narrower elytra, contains all eastern Turkish taxa recognized ( Hydroporus kurdistanicus , H. anatolicus anatolicus and H. a. koksali). Group B (“ bodemeyeri – cuprescens ” group) contains H. cuprescens and all subspecies of H. bodemeyeri and is characterized by smaller pronotum and slightly broader elytra. CVA of the specimens belonging to group A ( Figure 4B View Figure 4 ) clearly separates all three taxa recognized, even though both subspecies of H. anatolicus form slightly overlapping groups. Body shape differences are small within the group, concerning mainly the constriction of the body outline at the junction of the elytra and pronotum (i.e., the pronoto-elytral angle), the width of posterior lobe of the pronotum covering the scutellum and the shape of the posterior part of the elytra. CVA of the specimens belonging to group B ( Figure 4C View Figure 4 ) clearly separates specimens of H. cuprescens from those of H. bodemeyeri along the first canonical axis, corresponding with the relative width of the elytra and the size of the pronotum. The subspecies of H. bodemeyeri form separate but widely overlapping groups.

The MANOVA revealed a significant difference in shape between all taxa (species/ subspecies) recognized (F = 10.58; Wilks lambda = 0.015; d.f. = 60/513.3; p <0.0005). Permutation tests also revealed significant differences between all pairs of recognized taxa ( Table 2). Body-shapes were found to overlap considerably between the subspecies of H. bodemeyeri and slightly between both subspecies of H. anatolicus , reflecting the high percentage of wrongly classified specimens of both species in the discriminant analysis ( Table 2).

Body shapes were found not to overlap between most pairs of taxa, with no specimens wrongly classified in the discriminant analysis. The overlaps were only found between the pairs of subspecies of H. bodemeyeri , reflecting a high percentage of wrongly classified specimens of males of all subspecies and females of H. b. bodemeyeri and H. b. cariaensis in the discriminant analysis performed. Permutation tests revealed significant differences only between the pairs of taxa in which higher numbers of specimens in available ( Table 2).

Consensus landmark configurations of the taxa recognized are shown in Figure 3A–G View Figure 3 (the shapes of males and females are recognized only for H. b. bodemeyeri and H. a. koksali with significant sexual dimorphism). Cluster analysis based on the Euclidean distance of the consensus body shapes of males and females of all taxa recognized shows results consistent with the analyses performed above: the taxa are divided into groups A and B, the subspecies of H. bodemeyeri and H. anatolicus are more similar to each other than to the remaining species ( Figure 5 View Figure 5 ). Only the sexes of H. b. bodemeyeri and H. a. koksali do not form a single cluster, which agrees with the sexual dimorphism in body shape shown above; in all remaining taxa males and females are correctly clustered together. 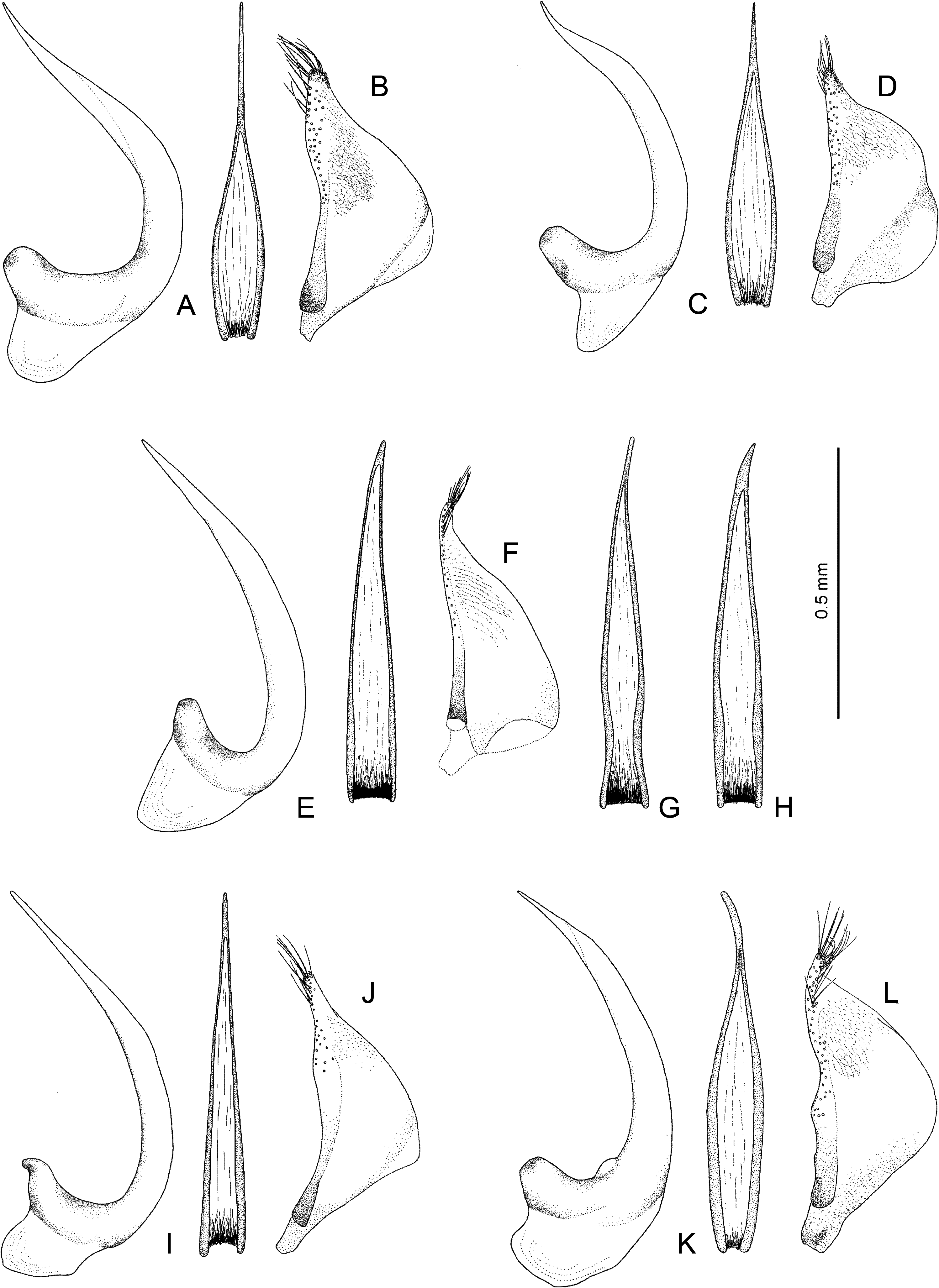 Figure 4(A–C). Canonical variate analysis (CVA) on the specimen coordinates for body shape. Body shape variation along the first (x) and second (y) axis is depicted by superimposed extreme body shapes (black lines: negative sides of the axes; grey lines: positive sides of the axes). (A) all taxa examined; (B) group A: “anatolicus-kurdistanicus group”; (C) group B: the “bodemeyeri-cuprescens group”. Figure 6. Distribution of the species of the H. bodemeyeri species complex.