Triapitsyn, Serguei V., 2006, A key to the Mymaridae (Hymenoptera) egg parasitoids of proconiine sharpshooters (Hemiptera: Cicadellidae) in the Nearctic region, with description of two new species of Gonatocerus, Zootaxa 1203, pp. 1-38: 15-18

Metasoma. Petiole relatively short, usually about as long as wide but sometimes either slightly wider than long or longer than wide, trapezoidal. Ovipositor about 3 / 4 length of gaster, not or barely exserted beyond its apex. Ovipositor: mesotibia ratio about 1.0: 1. Outer plates of ovipositor each with 1 distal seta.

This species is named in honor of Dr. Walker A. Jones ( United States Department of Agriculture — Agricultural Research Service).

This new species is very similar to G. morrilli   . It differs by the propodeum with the submedial carinae curved and more apart from each other ( Fig. 11 View FIGURES 9 – 13 ). Male genitalia of these two species are also different: in G. walkerjonesi   , the apodeme of the genital sternite is notably longer than the aedeagal apodemes ( Fig. 14 View FIGURE 14 ). Gonatocerus walkerjonesi   is even more similar morphologically (especially the carinae on the propodeum) and apparently more closely related genetically to G. annulicornis (Ogloblin)   from Argentina ( Hoddle and Stouthamer 2005), which lacks the dark cloud on the forewing in both sexes and whose males have relatively shorter antennae and are generally lighter colored (particularly the mesosomal dorsum) than those of G. walkerjonesi   . 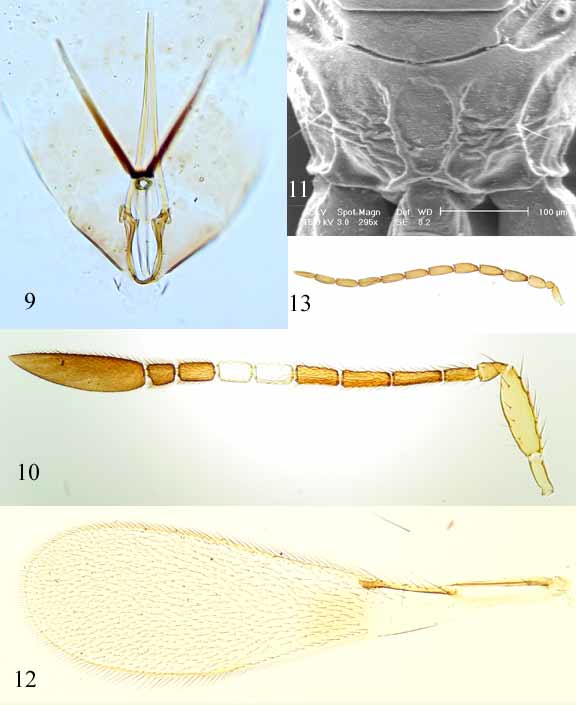