Introduction. The Rhizoecinae   ( Rhizoecidae   ) was divided into two tribes by Tang (1992) on the basis of the presence (Rhizoecini—here Rhizoecidae   ) or absence (Xenococcini—here Xenococcidae) of ostioles on the adult females. However, it is known now that some adult females of Rhizoecidae   lack ostioles (e.g. Capitisetella   and Pseudorhizoecus   ). Nonetheless, in the Rhizoecidae   , the third-instar female is a normal feeding instar whereas it has been shown ( Williams 2004) that all three genera included in the Xenococcinae have a third-instar pupal (non-feeding) stage before the fourth-instar (adult) female stage, clearly separating the two subfamilies. In addition, Williams (2004) showed that, in those species where circuli were present, they are flat or bulbous distally in the Rhizoecinae   , whereas in the Xenococcinae they are depressed or cup-shaped at the centre of the distal end. Adult female Xenococcinae also lack tubular ducts, pores and tubular cerores, all of which occur on most Rhizoecinae   . More recently, Danzig and Gavrilov-Zimin (2014) have reviewed the above classification and concluded that the myrmecophilous mealybugs are unrelated to the “true” mealybugs and are closer to the Margarodidae   s.l. due to the presence of the pupal stage in the female life cycle and the absence of tubular ducts, pores and tubular cerores. They therefore raised this group to family level, Xenococcidae Tang, suggesting that it had a common ancestor within the Margarodidae   s.l., i.e., outside the neococcids, although this was not supported by phylogenetic evidence. However, Downie and Gullan (2004) included Neochavesia caldasiae (Balachowsky)   in their phylogenetic analysis based on molecular studies, and recovered it within the Rhizoecinae   , sister to the remaining three hypogaeic species. It is here considered that the Xenococcidae are neococcids and that they probably arose from a common ancestor close to the true mealybugs. However, the final relationships of this family may only be discovered using a more comprehensive phylogenetic study using molecular data and a larger sample of taxa. Currently, the Xenococcidae contain 3 genera ( Eumyrmococcus Silvestri 1926   , Neochavesia Williams & Granara de Willink 1992   and Xenococcus Silvestri 1924   ) and 38 species, although it seems likely that the family is non-monophyletic.

Family diagnosis based on adult male morphology. Entirely apterous and therefore never with any sclerotised plates on mesothorax; body generally showing some modification for transport by ants, either rather narrow or with an enlarged cephalothorax and narrow abdomen. Head without both simple eyes and ocelli; antennae 1–5 segmented; pedicel perhaps always absent; antennae with hs and bristles; preocular ridges absent; postocular ridge absent; postoccipital ridge absent; dorsal midcranial ridge absent; ventral midcranial ridge poorly developed or absent; base of antennae may be either close together or far apart near anterior margin of head; neck constriction absent. Thorax. Barely differentiated from rest of body; pronotal ridge and pronotal sclerite absent; propleural ridge short, at most only extending anteriorly about half-way to head; loculate pores generally absent; legs generally short, often with some segments fused; trochanter with 2 round sensoria on each side; leg setae all hs; trochanters without a strong Yshaped sclerotised ridge; tarsi 1 segmented; tarsal digitules either undifferentiated or setose; claws without a denticle; claw digitules either absent or not capitate. Abdomen. Ostioles absent; abdominal segment VIII without glandular pouches and without a group of disc-pores, although 1 or more long setae may be present in this position; abdominal segment IX not apparently differentiated; penial sheath significantly longer than broad; penial sheath with a large, U-shaped, sclerotised structure extending within abdomen anteriorly from base of aedeagus, this usually longer than length of penial sheath; aedeagus often longer than penial sheath and sharply pointed.

Comment. Illustrations of two myrmecophilous mealybugs are included, namely Neochavesia   nr. trinidadensis (Beardlsey) ( Fig. 6 View FIGURE 6 ), and Xenococcus acropygae Williams   ( Fig. 7 View FIGURE 7 ). Further descriptions and figures of adult male Xenococcidae can be found in Williams (1998, 2004); Kishimoto-Yamada et al. (2005) and Hodgson (2012) and keys to separate the known adult males of the Xenococcidae are given in Hodgson (2012).

Discussion: Schneider and LaPolla (2011) showed that all Xenococcidae are obligate trophobionts with Acropyga Roger   ants. These ants are considered to feed primarily on the honeydew produced by the xenococcine scale insects and the alate ant queen is known to carry one of the xenococcines in its mandibles during her maiden flight, so that the colony she founds has a food source.

The most recent key to the adult females in this (sub)family is in Schneider and LaPolla (2011). In their phylogenetic study of the tribe Xenococcini   based on adult female morphology and using both Maximum Parsimony and Bayesian Inference, Schneider and LaPolla (2011) obtained a polytomy with four clades and one ungrouped species, with one clade equating to Neochavesia   , one to Xenococcus   and three to Eumyrmococcus   , which therefore may not be monophyletic. These clades were found to be related to their geographical distributions, with Neochavesia   restricted to the Neotropics, Xenococcus   to the Indo-Australian Region, the scorpioides- clade (three species, including the ungrouped E. williams Kozár & Konczné Benedicty   ) of Eumyrmococcus   to Africa and the Palaearctic, and the smithii   -clade to Asia, the Pacific and Australia. However, Schneider and LaPolla (2011) only used three representative species of pseudococcine and rhizoecine genera ( Geococcus   , Rhizoecus   and Phenacoccus   ) as their outgroups. There was support for three of the clades with Bayesian posterior probability scores of 100, although Bootstrap values in the Maximum Parsimony tree were all low (≤76) and there was no support for E. williamsi   grouping with the other two species of the E. scorpioides   -group. All known adult male Xenococcinae are apterous but the adult males of the three genera are rather different morphologically.

Key to genera of Xenococcidae based on adult male morphology:

2. Abdominal segment VIII with well-developed lateral finger-like processes on either side of ventral opening of penial sheath, each lobe with many setae of moderate-length. Abdomen with a strong constriction between segments II and III. Claw digitules present, setose.............................................. Neochavesia Williams & Granara de Willink   ( Fig. 6 View FIGURE 6 ) 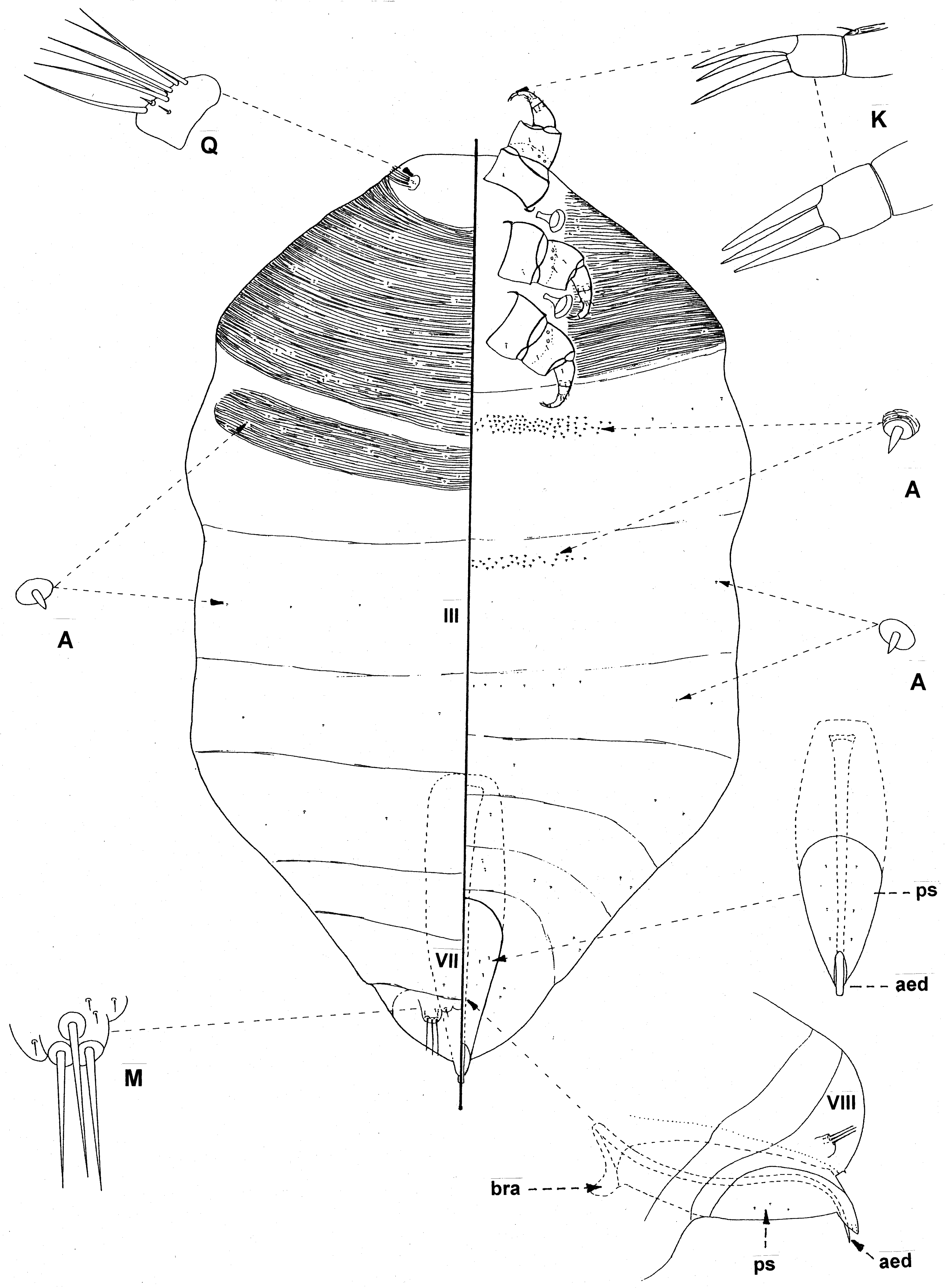