Material examined. Type. Burma, no other location, from galls on Dipterocarpus tuberculatus   ( Dipterocarpaceae   ), no date, col. C.F.C. Beeson ( BMNH: 1940: 180): 1/6ad ♂♂ (in fairly poor condition and none complete. All specimens missing wings and very squashed so that dorsal and ventral structures hard to separate; many setae represented only by basal sockets, but these broken setae are considered here to be mainly fs; otherwise most structures visible).

Metathorax: metatergal setae (mts): with a group of about 7 hs + 1 fs on each side (but tending to run into dorsospiracular setae). Dorsospiracular setae (dss): about 8 hs + 2 fs on each side. Dorsal part of metapleural ridge (plr 3) absent, without a suspensorial sclerite (ss). Ventral part of metapleural ridge well developed; episternum (eps 3) sclerotised, with about 8 fs + 2 hs postmetaspiracular setae (eps 3 s) on either side. Metepimeron (epm 3) sclerotised, without setae. Antemetaspiracular setae (am 3 s): about 6 fs + 3 hs on each side. Metathoracic spiracle (sp 3) similar in structure and size to mesothoracic spiracle. Metasternum (stn 3) membranous; anterior metasternal setae (amss) and posterior metasternal setae (pmss) abundant, with probably more fs than hs.

Comment. The structure of the preocular ridge was not very clear and it is possible that the ridge extending posteriorly to each ocellus from near the antennae is, in fact, an interocular ridge.

Whilst the basic structure of B. dipterocarpi   appears to be very similar to that of B. napiformis ( Hu et al. 1995)   , it differs in a few particulars, namely (characters of B. napiformis   in brackets): (i) body and limbs covered with numerous fleshy setae (apparently few or absent); (ii) antennae with 4 groups of fleshy setae, each group arising from a common base (fleshy setae represented by 4 or 5 single fleshy setae); (iii) scape and pedicel with few setae (with many setae); (iv) prosternum without a median ridge (median ridge present); (v) prosternal and anteprosternal setae present (absent); (vi) antemetaspiracular setae present (absent); (vii) long tochanter setae not differentiated from other setae (differentiated); (viii) penial sheath with a spatulate apex (finely pointed), and (ix) penial sheath with a distinctly separate segment IX (segment IX apparently fused with style).

The male of Mangalorea hopeae ( Takagi 1992b)   ( Fig. 44 View FIGURE 44 ) shows some similarities to B. dipterocarpi   , most particularly in the abundant fleshy setae throughout the body, although those on B. dipterocarpi   are rather longer. However, M. hopeae   differs from both Beesonia   species in having: (i) only one size of fleshy setae on the antennae (two); (ii) numerous setae laterodorsally on prothorax (few or absent); (iii) legs with a separate tibia and tarsus (fused); (iv) abdomen elongate (not unusually elongate); (v) segment VIII not very sclerotised (distinctly sclerotised); (vi) penial sheath short, less than 1/4th length of abdomen (very elongate, about as long or longer than abdomen); (vii) penial sheath with some longish setae (only short setae present); (viii) loculate disc-pores associated with glandular pouches not extending either medially or laterally (extending medially across segment VIII) and (xi) in lacking capitate setae on the antennal apex (present).

According to Hu et al. (1955), Green (1926) indicated that males of B. dipterocarpi   had hamulohalteres. These are definately absent, as are all the supporting structures, on all species here included in Beesoniidae   . 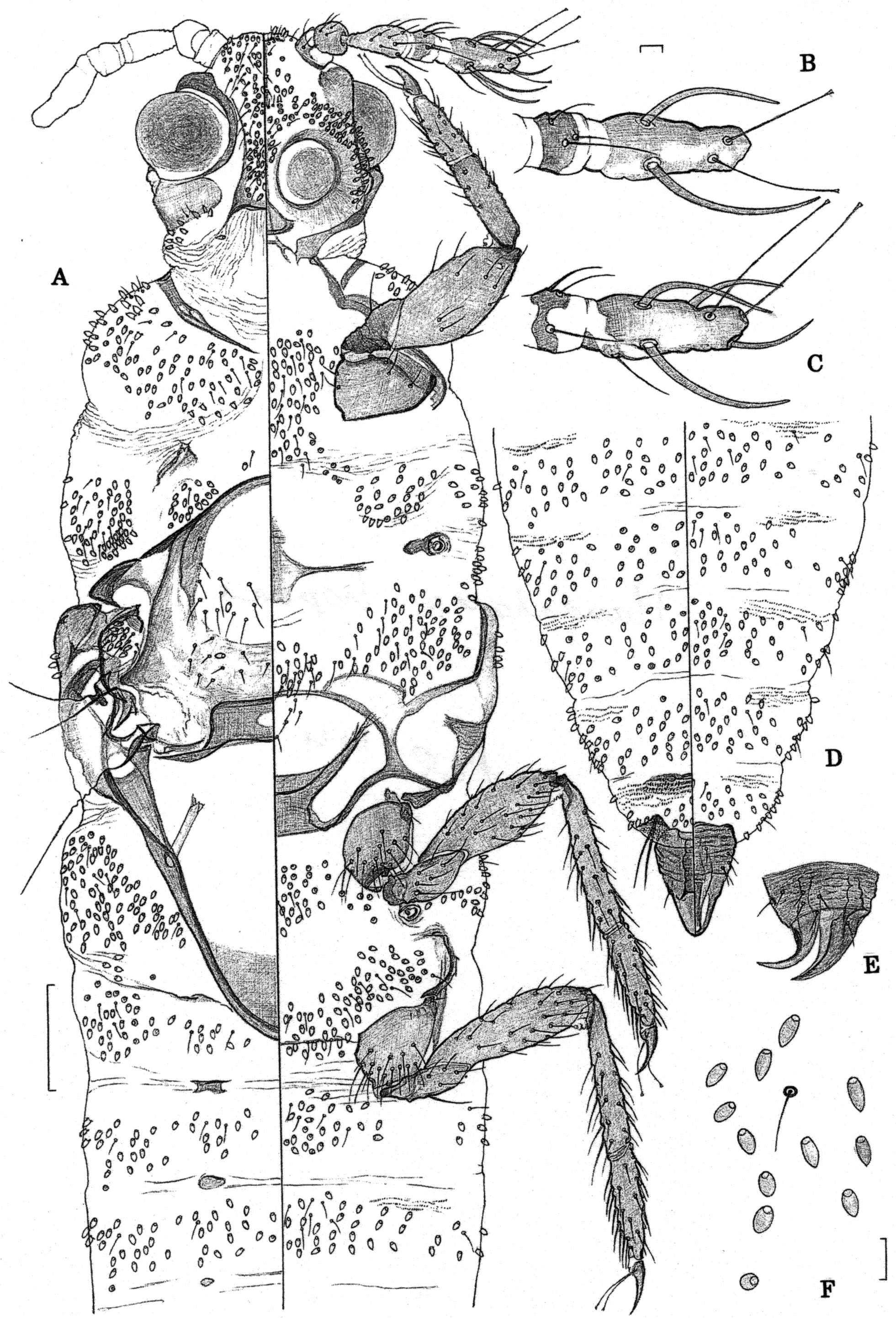 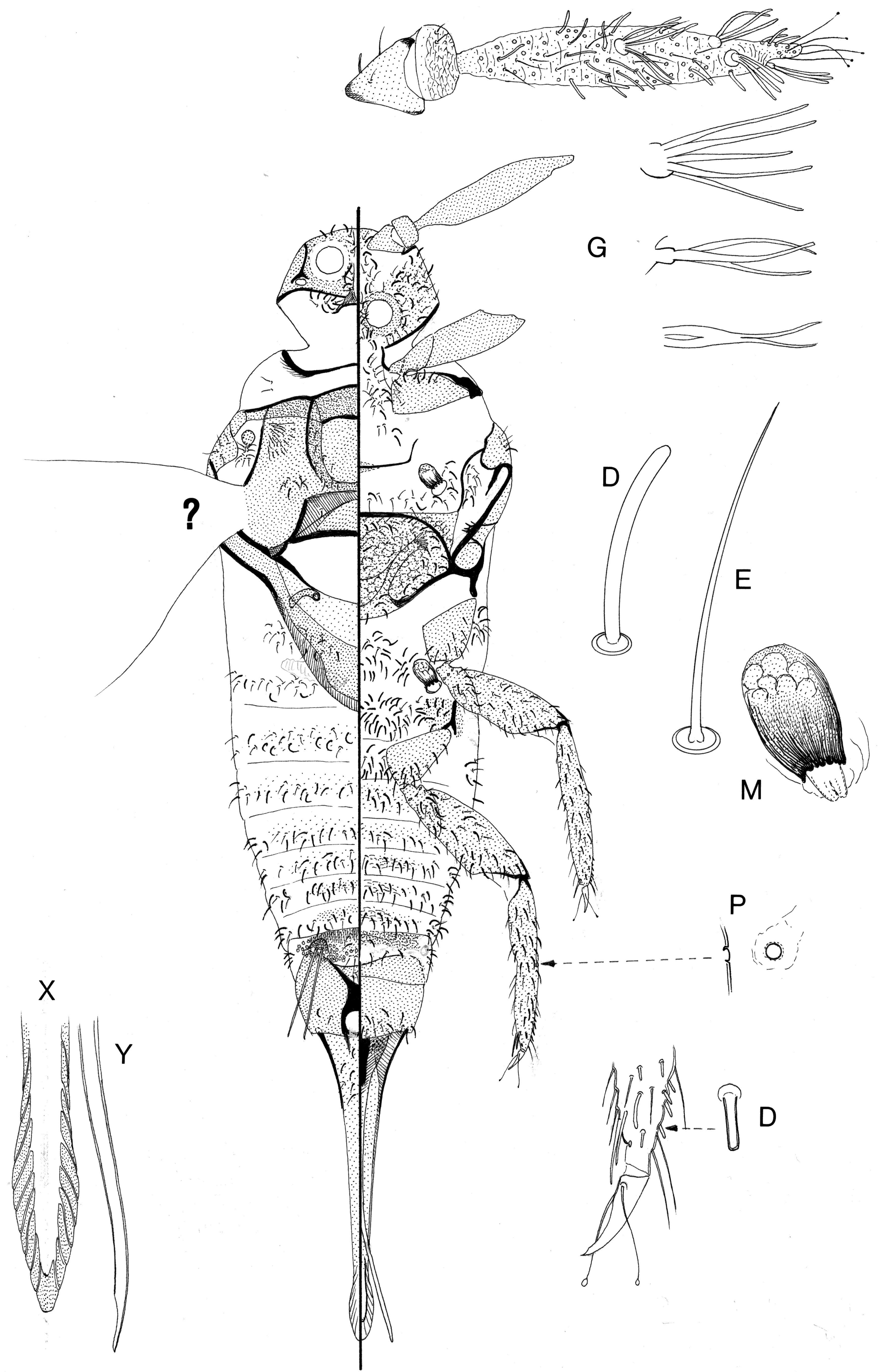