Standing hairs abundant everywhere and longer on head and mesosoma. Hairs on scapes at most a little longer than scape diameter at midlength; hairs on tibiae at most about as long as half the maximum tibial width. Body and appendages coated with dense, short and silvery to slightly golden pubescence, not masking the sculpturation and longer on mesosoma and petiole.

Colour black, most of the funicular joints and mandibular apices ferrugineous.

The main differences can be summarized as follows:

Diagnosis. The largest species of the revoili  -group known so far, with almost complete lateral marginations of the mesosoma and a continuous well developed ridge separating propodeal dorsum from declivity.

Clypeus subcarinate, with anterior margin arcuate and medially bearing a faint shallow rounded lobe. Head trapezoidal, wider behind than in front, posterior margin and sides widely convex. Eyes moderately large and convex, close to the posterior corners. Mesosoma in profile evenly weakly convex, mesonotum almost flat. Promesonotal suture well-developed, metanotal suture weak and hardly interrupting the dorsal sculpturation. Pronotum with a pair of strong teeth at its anterior corners and laterally clearly marginate, the margination interrupted just before the promesonotal suture. Mesonotum with a weaker margination, interrupted before the metanotal suture. Lateral margination of propodeal dorsum faint, detectable along about its anterior half. Propodeal dorsum and declivity well-separated by a continuous ridge which is slightly higher medially. Petiole with a dorsal pair of distant, moderately long and diverging spines and a pair of lateral shorter ones; the space between the dorsal spines straight. First gastral tergite anteriorly weakly concave.

Short to moderately long standing hairs abundant on all body surfaces and appendages. On the legs hairs are shorter than the maximum tibial width. Hairs on scapes are at most slightly longer than scape diameter at midlength. Body and appendages coated with dense, short and greyish pubescence, not masking the sculpturation and sparser on head dorsum and clypeus.

Colour black, except a brown dorsal strip on femurs and tibiae and pale ferrugineous gastral apex.

Comment. Polyrhachis terminata  is unique for its large size and the complete ridge running between propodeal dorsum and declivity. This ridge is much stronger than the incomplete and weak margination of the propodeal sides. 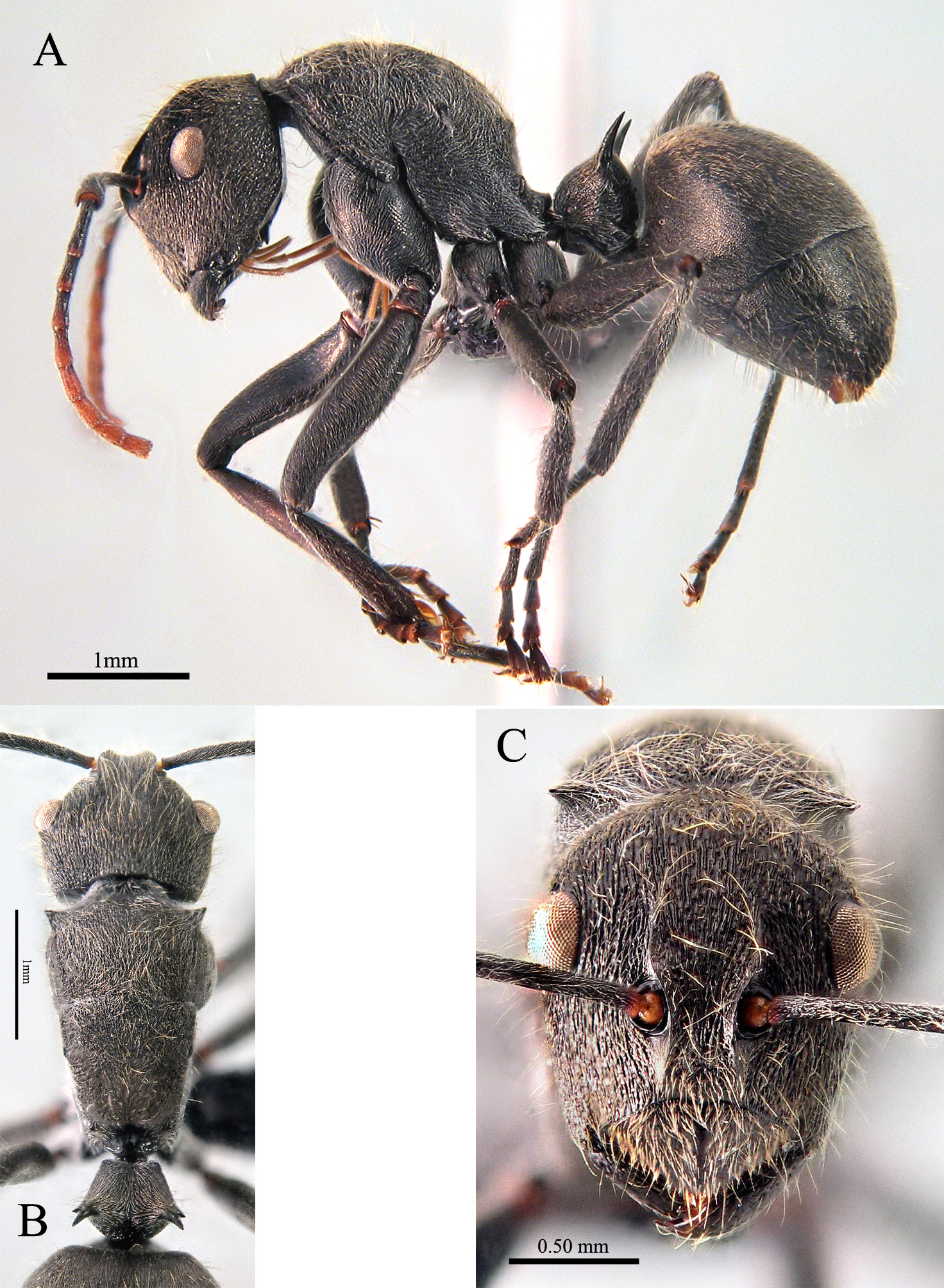