Diagnosis. A stout species in the viscosa  -group, with strongly reduced pilosity, opaque integument, propodeal dorsum and declivity separated by a medially protruding transverse ridge, and petiole armed with a lateral pair of spines and a dorsal pair of teeth. Very similar to P. v i s c o s a, but with ordinary shaped scape and first funicular joint.

Integument matt; ground sculpture finely reticulate-punctate all over the body and more superficially so on appendages. A superimposed, irregular reticulate rugulosity covers most of head and mesosoma in a somewhat areolate pattern.

Standing hairs almost lacking: occurring only at the anterior clypeal margin and on gastral tergites III –V and all sternites. Pubescence very short and sparse, hardly visible on the body.

With the usual caste differences from the worker and with weakly convex eyes. Wings moderately infuscated.

Integument subopaque, finely reticulate-punctate; only the head dorsum bears a trace of rugulo-reticulation recalling that of female castes.

Comment. I often found specimens of P. o m i s s a labelled as P. v i s c o s a and mixed with it, but omissa  always lacks the distinctive antennal features that separate viscosa  from all other African Polyrhachis  known so far. Polyrhachis viscosa  has a strongly widened apex of the scape and a strongly depressed first funicular joint (see Fig. 22 in Bolton, 1973). This feature is unique to viscosa  and seemingly constant. Although I found several gynes assignable to P. omissa  collected in Yemen, Collingwood and Agosti (1996) in their survey of Arabian ants mentioned P. v i s c o s a and P. lacteipennis F. Smith  only. Polyrhachis lacteipennis  superficially recalls viscosa  and omissa  , but belongs to the non-African subgenus Myrmhopla  and has a slender and immarginate mesosoma and other very distinctive features.

I also examined the types of P. an t i n or i i Emery, which Bolton (l.c.) did not see and synonymised with P. viscosa  . I can confirm that antinorii  is conspecific with viscosa  ; therefore no old available names are assignable to omissa  .

The main features separating omissa  from viscosa  workers can be summarized as follows:

Among the viscosa  -group species listed by Bolton only viscosa  itself and nigrita  share the same arrangement of petiolar spines as in omissa  : a long lateral pair, and a much shorter, often tooth-like, dorsal pair. Moreover, nigrita  differs from viscosa  and omissa  especially by its longer propodeal teeth and by the propodeal dorsum evenly rounding into the declivity. 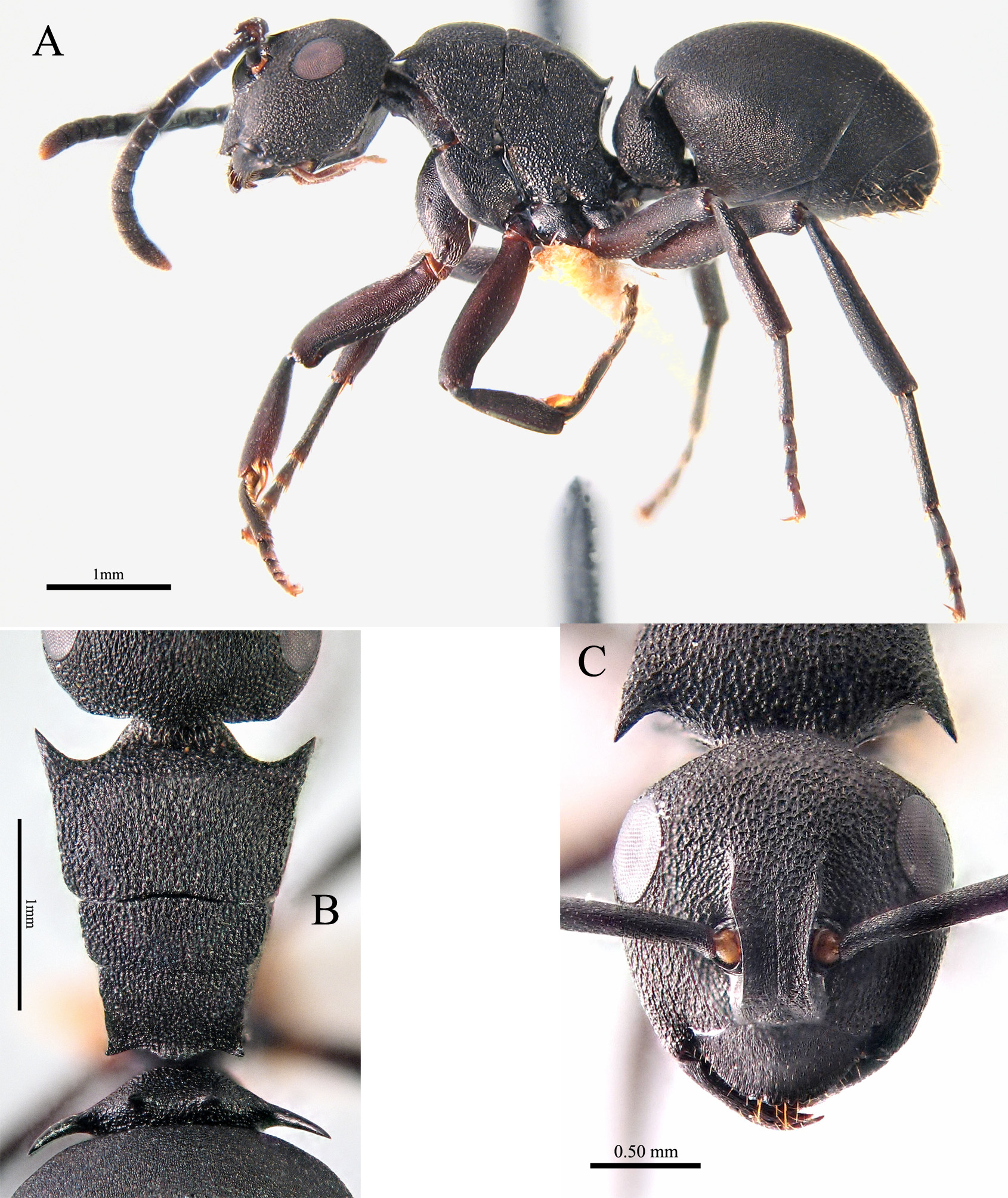