Prothorax subglobular, slightly wider than long (LP/WP: 0.88), mostly glabrous, widest at middle, weakly convex, and with metallic light yellow-green, and turquoise round scales. Prothorax with the following scaly markings of metallic light yellow-green and turquoise round scales: a) thin band at the lateral side of anterior margin, b) two elongated spots on both sides of the middle of disc, and c) thick patch in lateroventral stripe before the coxa confluent with the short scaly band on anterior margin.

Elytra ovate (LE/WE:1.58), wider and twice longer than prothorax (WE/WP: 1.33, LE/LP: 2.38), glowing red, sub-glabrous, moderately convex with very minute and sparse punctures and pubescence. Each elytron has scaly patches of metallic light yellow-green, and turquoise recumbent round scales forming the following: a) three subbasal patches with the dorsal and lateral patch both elliptical, and the middle subcircular, b) one small sub circular patch just below or at times in between the middle sub-basal patch and the lateral elliptical patch, c) median transverse band extending from middle towards lateral side but not reaching margin, d) antemedian stripe in the lateral margin extending towards apex, e) postmedian subsutural stripe extending towards apex confluent with the antemedian, lateral margin stripe, f) thin elliptical stripe between the subsutural and sutural patches, g) postmedian elliptical patch along suture, h) subapical elliptical patch along suture, i) oblique reniform subapical patch, and j) thin elliptical subapical spot near the lateral margin.

Females differ from males by having wider elytra (LE/WE: 1.31-1.44) and weakly bulging Ventrite I on disc. Otherwise mentioned, similar to the male.

Etymology. The specific epithet is named after the Obu-Manuvu, one of the indigenous tribes of Davao City.

Notes on Distribution and Habitats

The specimens of Pachyrhynchus obumanuvu   sp. nov. were collected in the western side of Davao City. The area is characterized by hilly topography and the vegetation type is a mixture of agricultural and secondary forests. The specimens were collected along a narrow trail in a steep mountain slope with lush vegetation of various species of ferns, aroids, or ch ids, an d oth er sh r ubs. Th e auth or s could barely recognize the species of trees on the steep slope due to th e lush fer n s an d shrubs. The new species was collected while perching on the leaves and stem of Procris urdanetensis Elmer   (family Urticaceae   ), a Philippine endemic species, and Elatostema sp.   (family Urticaceae   ). There were lots of bite marks on the leaves of Procris urdanetensis Elmer   and Elatostema sp.   which suggest that it can be its food plant. The association of the endemic Pachyrhynchus species  with endemic plants was also noted by Schultze (1923). The specimens were collected using a beating sheet and handpicking around 8:00 to 10:00 in the morning where they were found inactively perching. The authors do not wish to disclose the exact location in print to avoid over collection of the species by commercial collectors as in Pérez-García 2010, the GPS coordinates are available on the specimens’ label data. 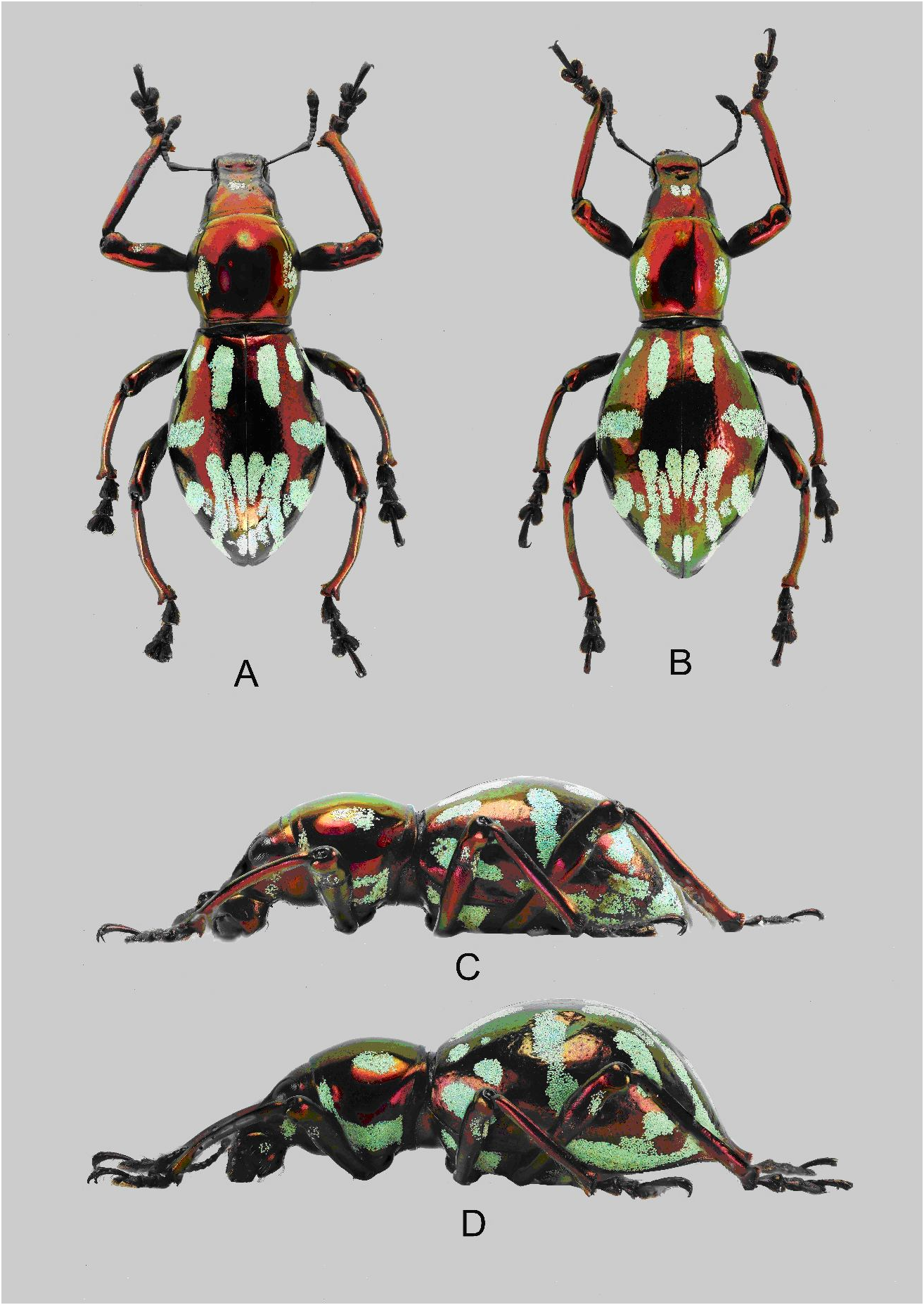 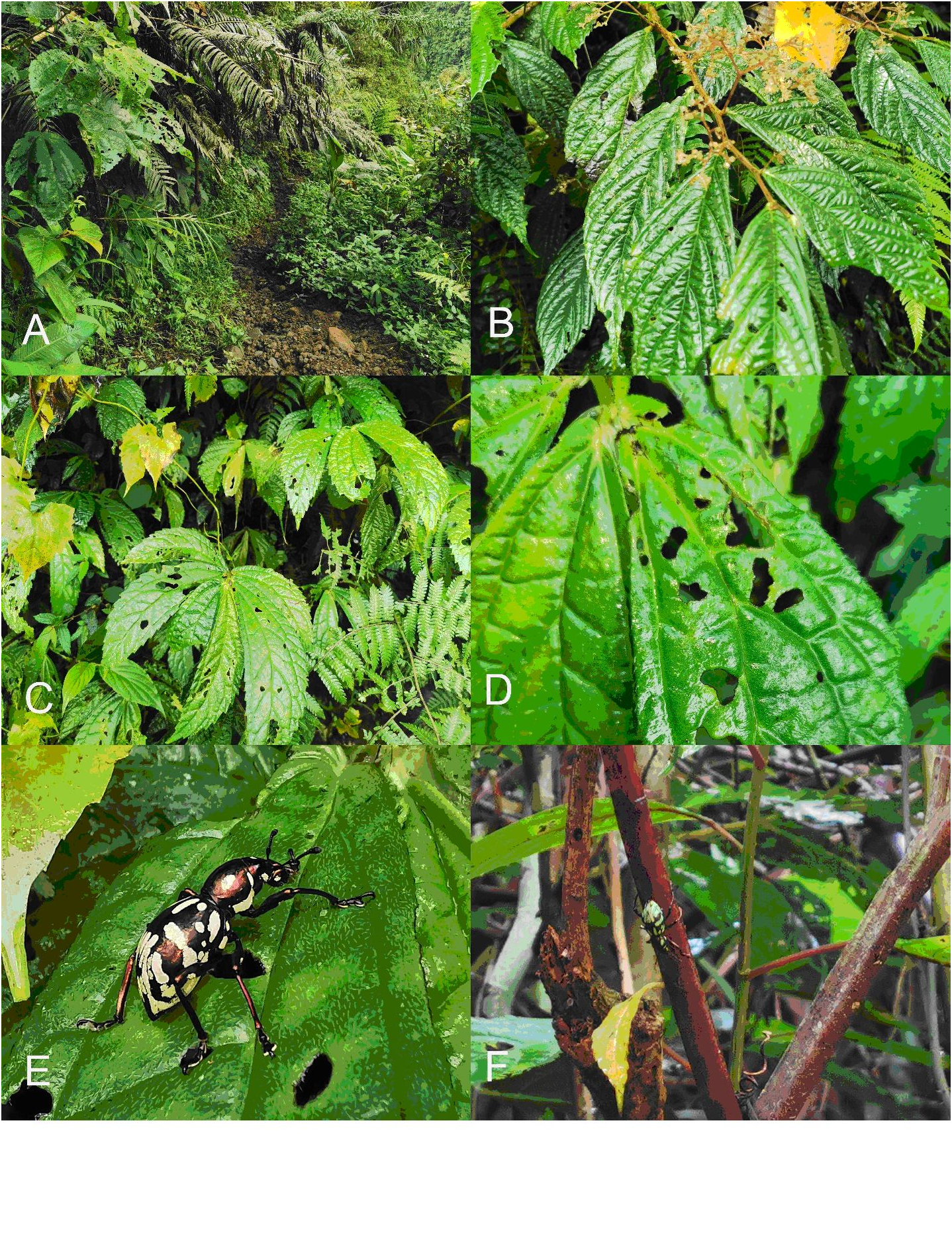