Diagnosis. Males of Nephepeltia berlai  can be distinguished from all congeners by their strongly upturned cerci tips ending on a long acute spine ( Fig. 13View FIGURE 13 b; not strongly upturned or not ending in a long acute spine in other species, Figs. 13View FIGURE 13 a, c –i). They share the tubercle on venter of thorax with N. aequisetis  , N. flavifrons  , and N. flavipennis  ( Figs. 6View FIGURE 6 a –c; 7; venter of thorax smoothly convex or with a spine as long as twice its width in other species, Figs. 6View FIGURE 6 d; 8), and the spurs of inner row of male hind tibiae of about uniform placement and length with N. aequisetis  , N. flavipennis  , and N. phryne  ( Figs. 2View FIGURE 2 a –b, e, g; closely set and peg-like at medial 0.33 in N. leonardina  or shorter and more closely set at basal 0.50–0.75 in N. flavifrons  , Figs. 2View FIGURE 2 c –d, f). Male vesica spermalis is most similar to that of N. aequisetis  , but its medio-ectal distal process is distinctly shorter than the latero-ectal distal lobes ( Fig. 11View FIGURE 11 b; medio-ectal distal process only slightly shorter than latero-ectal lobes in N. aequisetis  , and longer than latero-ectal lobes or vestigial to absent in other species, Figs. 11View FIGURE 11 a, c –f). Females of N. berlai  can be distinguished from those of N. leonardina  by the radial planate consisting of three cells and the base of Fw discoidal planate with one cell ( Fig. 3View FIGURE 3 b; four or five and two respectively in N. leonardina  , Fig. 3View FIGURE 3 f). The number of cells between Fw subtriangle and hind margin of wing is variable in N. berlai  , and females are undistinguishable morphologically from those of N. aequisetis  , N. flavifrons  , and N. phryne  (females of N. flavipennis  unknown).

Distribution. Nephepeltia berlai  has the most restricted distribution of the genus, being known only from SE Brazil, Paraguay, and NE Argentina ( Fig. 16View FIGURE 16). Its last stadium larva was described based on specimens collected along marginal vegetation at an artificial pond rich in decomposing organic matter ( Dalzochio, 2009). 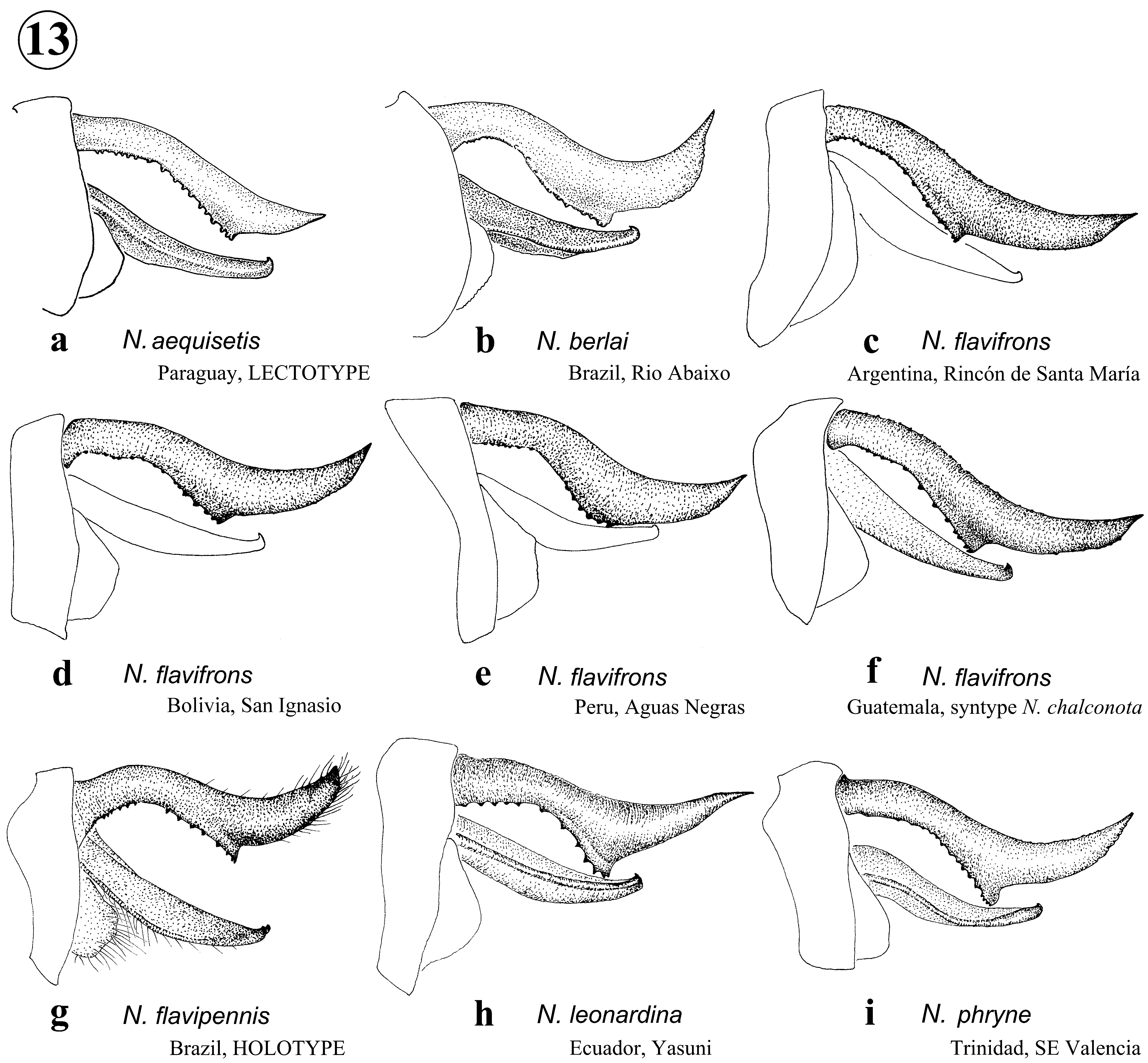