The specific epithet refers to the Tupi-Guarani (indigenous Brazilian tribe) name of the district where the type material was collected.

Dorsal colour pattern constituted by a median stripe of orange-ochre, bounded on either side by a black line, externally to which is a broader white line, and in turn this is externally bordered by a thin black line, externally to which is a grey band with dense white mottling, bordered by a thin marginal black line. Diameter of muscular cylinder round ejaculatory duct equivalent to 0.5 times the diameter of this duct. Female-tomale atrial length ratio, 3.5–4.

Preserved animals up to 50 mm long, and 4 mm wide. Body margins nearly parallel; anterior end rounded, posterior end pointed. Dorsum strongly convex, ventral side slightly convex. Dorsal body surface constituted by a median stripe of orange-ochre (onequarter of body width) that passes into the black of cephalic region (one-fifth of body length), bounded on either side by a black line (1/16th) posteriorly merging with each other, externally to which is a broader white line (one-eighth), and this is externally bordered by a black stripe (1/16th), externally to which is a grey stripe (one-eighth) with dense white mottling, then bordered by a marginal thin black line ( Fig. 12A View Figure 12 ). Ventral body surface is whitish with blackish margins. In preserved specimen F6660, dorsal colour slightly faded. In preserved specimen F6998, stripes were varied from faded black grey to pearl orange. Two types of eyes: a conical type contouring only anterior end; and a cup-shaped type, spreading dorsally onto the black stripes. Sensory pits simple invaginations, 40 μm deep, located ventromarginally in a single row from the very anterior tip to at least the end of the anterior fifth of the body. Relative position mouth-to-body length, 61%. Relative position gonopore-to-body length, 74%.

Testes dorsally located between supraintestinal parenchymal muscle layer and intestine; anteriormost testes (at a distance from anterior end equal to 22% of body length) behind ovarian region, posteriormost near root of pharynx. Penis bulb elongated, strongly developed, consisting of tightly packed muscle fibres variously orientated in its anterior section, while posteriorly the fibres are orientated diagonally, extending from 1 mm (holotype) anterior to penis papilla to the level of the gonopore, even more posteriorly in the dorsal body region. Diagonal fibres on the right side of the bulb run obliquely downwards to embrace ventrally the anterior portion of the female atrium; further course of these fibres could not be determined owing to tissue damage. Sperm ducts run dorsolaterally to the ovovitelline ducts. Laterally to penis bulb, sperm ducts bend anteriorly and medially, and then ventrolaterally penetrate the bulb. The ducts subsequently recurve and join to form an unpaired, sinuous sperm duct directed posteriorly ( Fig. 13A, B View Figure 13 ). The unpaired portion continues as an ejaculatory duct inside the penis papilla, which traverses centrally to open at its tip. Sperm present in sperm duct, both along its course outside and in part of anteriorly directed portion inside penis bulb. Epithelium of sperm ducts and unpaired sperm duct pierced by glands producing minute weakly cyanophil granules; surrounded by a 7-µm-thick layer of circular muscles. Ejaculatory duct lined by 15 µm, ciliated epithelium pierced by abundant glands producing erythrophil granules; surrounded by a layer of circular muscle fibres constituting a muscular cylinder with a diameter equivalent to 0.5 times the diameter of this duct.

Penis papilla long, with dorsal and ventral insertions at the same transverse plane; it is horizontal and cylindrical, with a length (4 mm) equal to ten times its diameter, even occupying more than half of the female atrium. Papilla covered with a cuboidal, non-ciliated epithelium, pierced by gland cells especially distally, producing erythrophil granules ( Figs 12E View Figure 12 , 13D View Figure 13 ). Subepithelial penis musculature consisting of a dense 25- to 105-µm-thick layer of circular muscle, followed by a thin layer (12 µm) of longitudinal muscle.

Male atrium not folded ( Fig. 13A, B View Figure 13 ), lined with a low, non-ciliated epithelium, pierced by glands producing an amorphous erythrophil substance and underlain by a 15-µm-thick layer of circular muscles, followed by a thin layer of longitudinal fibres.

Ovaries oval shaped, 550 µm in maximal anteroposterior diameter and 250 µm in dorsoventral diameter, and situated at a distance from anterior end equivalent to 16% of body length. Ovovitelline ducts emerge from dorsolateral aspect of ovaries. The oviducts run laterally to the female atrium, then curve medially and join to form a common glandular ovovitelline duct, dorsally to this atrium. Common glandular ovovitelline duct as long as half of the female atrium length, communicates with female genital duct; the latter being a 40-µm-long projection of the dorsoposterior region of the female atrium ( Fig. 13A, B, D View Figure 13 ).

Female atrium long, without folds, as long as 3.5–4 times the male atrium length ( Fig. 13A, B, D View Figure 13 ) and lined with a tall epithelium (70 µm). Posterior section of female atrium lined with an epithelium with stratified aspect and some internal gaps; surrounded by a thin layer of longitudinal muscle fibres, followed by 70-µm-thick layer of circular fibres, and a third layer (115 µm) of fibres in criss-cross arrangement. No evident distinction between atrial fibres and those of common muscle coat. 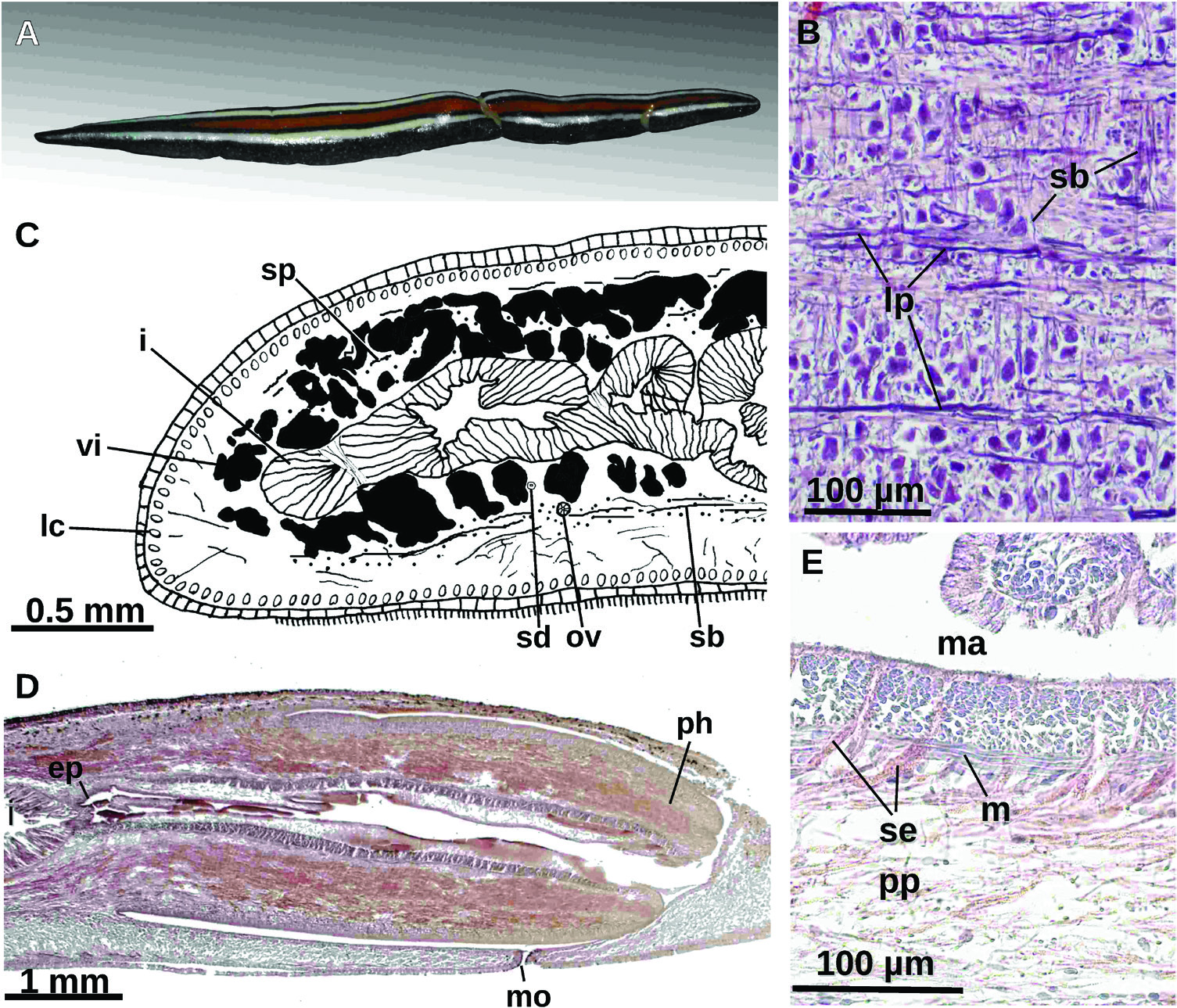