Areas covered with Atlantic forest in the municipalities of Nova Iguaçú and Teresópolis, State of Rio de Janeiro, Brazil.

Dorsal colour pattern constituted by a median luminous orange band, bounded on either side by a black stripe, externally to which is a greenish-yellow stripe, and this again is bordered externally by a marginal black band. Inner pharynx musculature with two layers. Anterodorsal region of penis bulb more developed. Penis papilla with dorsal insertion strongly displaced anteriorly and very ventrally, as long as 18 times its diameter.

The specific epithet is a Tupi (indigenous Brazilian tribe) word that means mound ( Tibiriçá, 1984), referring to the hilly terrain where the species was collected.

Mouth situated at a distance from root of the pharynx equivalent to 54% of pharyngeal pocket length. Pharynx cylindrical ( Fig. 6E View Figure 6 ). Oesophagus-to-pharynx ratio, 18%. Pharyngeal musculature ( Fig. 6D View Figure 6 ) same as in the type species of the genus in terms of organization and development, with the exception of the inner longitudinal layer, which reaches 35 µm in thickness.

Testes dorsally located between supraintestinal parenchymal muscle layer and intestine; anteriormost testes at a distance from anterior end equivalent to 13% of body length; posteriormost near the pharynx root. Penis bulb oval shaped, relatively strongly developed, consisting of tightly packed muscle fibres variously orientated. The bulb is more developed dorso-anteriorly, and extends from 0.5 mm anterior to penis papilla up to the gonopore region (specimen MZUSP PL 2072). Diagonal fibres surrounding distal section of penis bulb run obliquely downwards on the right side of the body to embrace ventrally the anterior portion of the female atrium. Sperm ducts run laterally to the ovovitelline ducts. Laterally to ventral insertion of penis papilla, sperm ducts bend anteriorly and medially, then penetrate penis bulb ventrolaterally, and maintain this course until they join each other. From this point onwards, the ejaculatory duct runs posteriorly, centrally traversing the penis papilla to open at its tip. Sperm present in extrabulbar portion of sperm ducts; in one specimen, sperm was also present at the anterior section of the intrabulbar lumen.

Sperm ducts lined with a cuboidal, ciliated epithelium and surrounded by a 5- to 8-µm-thick layer of circular muscles. Proximal half of ejaculatory duct lined with cuboidal, ciliated epithelium and pierced by gland cells producing weakly erythrophil, fine granules; distal half lined with squamous, non-ciliated epithelium pierced by gland cells producing erythrophil, coarse granules. Anterior half of this duct surrounded by circular muscles, which constitutes a muscular cylinder in the distal portion with a diameter equivalent to five times the diameter of this duct.

Male atrium not folded ( Fig. 7A, B View Figure 7 ), lined with a low, non-ciliated epithelium, and underlain by a 5-µm-thick layer of circular muscles, followed by an equally thin layer of longitudinal fibres. A set of muscle fibres is also present as longitudinal fibres extending around the gonopore canal laterally to the male atrium, and being intermingled with those of the penis bulb.

Ovaries oval shaped, 300 µm in maximal diameter, and situated at a distance from anterior end equivalent to 22.5% of body length. Ovovitelline ducts emerge from the dorsolateral aspect of ovaries. The oviducts run laterally to the female atrium, curve medially and then join to form the common glandular ovovitelline duct, dorsally to this atrium. Common glandular ovovitelline duct as long as 40% of female atrium length, communicating with female genital duct ( Fig. 7B View Figure 7 ); this duct is a projection of the posterior region of the female atrium, bent dorsally and lined with a squamous, non-ciliated epithelium. A cyanophil fibrillar mass, 5–10 µm thick, is immediately present underneath this epithelium of the female atrium, with very thin circular filaments (<1 µm) resembling muscle fibres in stain affinity and orientation, followed by a layer of longitudinal muscle fibres.

Female atrium without folds, as long as three times that of male atrium, and lined with a cuboidal-tocolumnar epithelium, which is pierced by glands producing xanthophil granules and is underlain by a thin layer of muscle fibres in a criss-crossed arrangement, followed by a loose layer (25 µm) of longitudinal fibres. 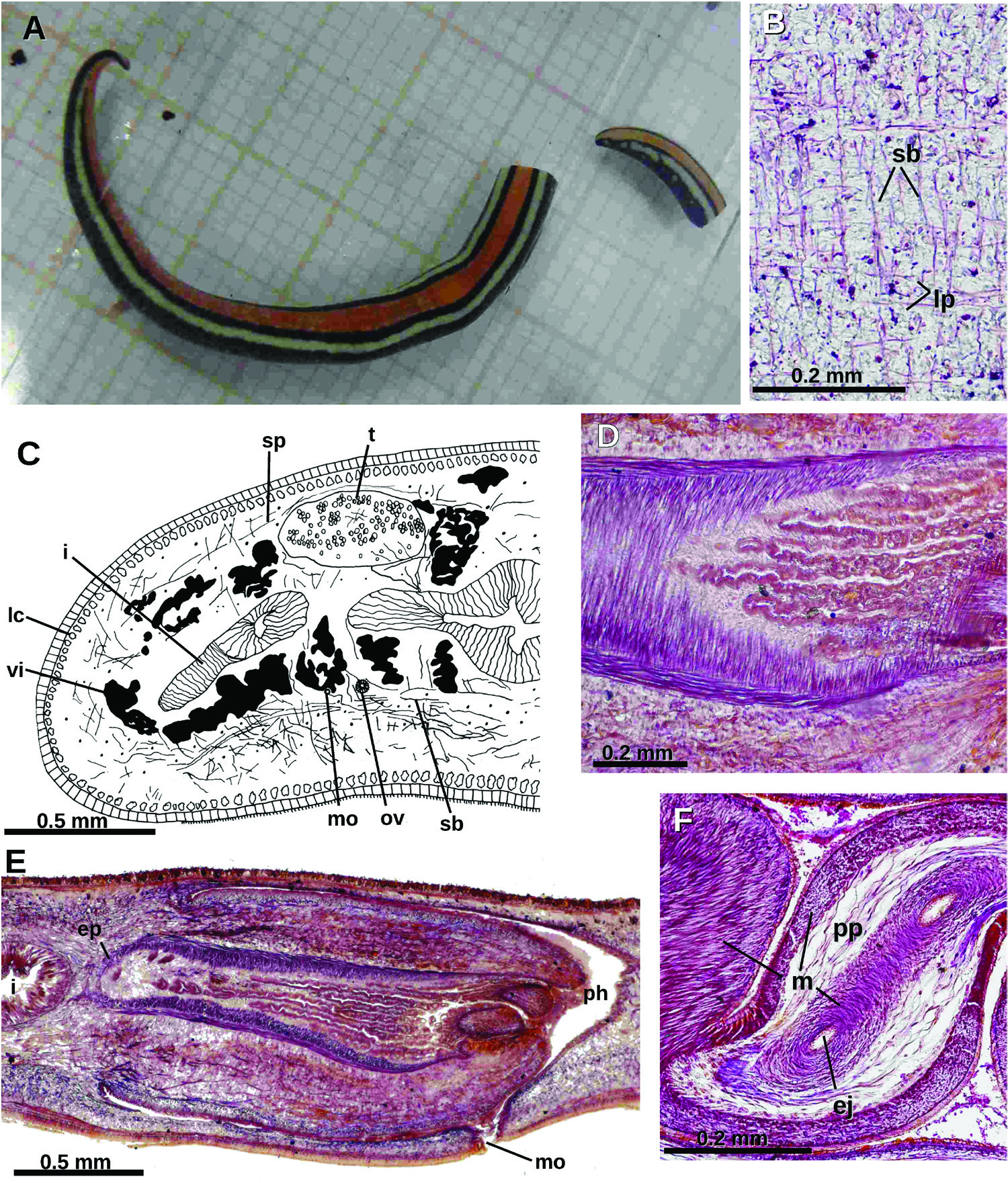