“Paratype”. NMSL unnumbered, collected 1938 or 1941 from the type locality. In his description of the species, Deraniyagala (1941) mentioned a second specimen. However, he did not explicitly designate it as a type or report a specimen number. There is no evidence that any of the data or figures reported for R. dorsimaculatus   pertain to this second specimen, which we thus do not consider a paratype. The second specimen, which is also lost ( Gans 1966: 14), was referred to as a paratype by Gans (1966: 13).

Description of referred specimen CAS 225842. Generally good condition; split ventrolaterally and ventrally at vent. Head small; snout pointed. Rostral large, protruding far anterior (1.8 mm) to mouth, pointed, trihedral anteriorly, much longer than wide, dorsally strongly carinate and raised/arched (in lateral view); rostral widest at level of anterior superior corner of first supralabials. Rostral many times longer (in dorsal view) than short rostralfrontal gap. Frontal subtriangular with convex anterior margin, distinctly longer than wide, little break in angle between anterolateral (ocular) and posterolateral (parietal) margins. Frontal much shorter than, as wide as, rostral. Paired nasals (and most of prefrontals) separated from each other by rostral. External naris small, subcircular, slightly countersunk within small depression, located in anteroventral corner of nasal. Nasal contacts supralabials 1 and 2. Prefrontals briefly (for less than 25% of their length) in contact with each other along midline, briefly separating frontal from rostral. Prefrontals taller than long, longer than frontal. Supralabials four, first smallest, making the least contribution to margin of mouth; second larger but only slightly longer at mouth; fourth much the largest. Ocular contacts supralabials 3 and 4. Eye small but distinct, diameter less than one third length of ocular, located near anteroventral corner of ocular, bulging slightly from ocular surface, pupil subcircular. Paired parietals longer than frontal, broadly rounded posteriorly (a little> 90°). Opposite parietals in brief midline contact, left overlapping right. Parietals a little longer than wide, wider than frontal and rostral. Each parietal contacts four scales other than head shields and supralabials. Three infralabials, first and third subequal in length, notably shorter than second. First infralabials not in midline contact behind mental. First ventral longer than wide, second to fourth approximately as long as wide, fifth and subsequent ventrals wider than long. First ventral not in contact with mental.

Variation. See Table 1 View TABLE 1 for meristic and morphometric details. CAS 225843 and 226077 (the latter with much of inside of mouth blackish, this atypical condition possibly artefactual) in generally good condition; other CAS specimens dehydrated or otherwise damaged. CAS 225804 incomplete, in several parts, and poorly preserved; CAS 244583 eviscerated, largely skinned and missing anterior of head; CAS 244584 partly eviscerated and lacking most of vertebral column, end of tail including shield missing. CAS 225842 and the other new specimens closely match the lost holotype. The holotype was seemingly less attenuate than the best-preserved CAS specimens ( Table 1 View TABLE 1 ). The number and disposition of head shields (including left over right overlap of parietals) is similar in all specimens as far as can be ascertained. Mental notably more prominent in CAS 225843 and separated from anteriormost chin shields (as also in CAS 226078) by midline contact between first pair of infralabials.

Ventrals 230 – 250; subcaudals 6 to 8 on each side. In some specimens (e.g., CAS 225843) it is difficult to determine whether some of the posteriormost scales on the ventral surface of the tail are ‘true’ subcaudals or not. Anals always paired, making little or no midline contact except slight right over left overlap in CAS 226662. Dorsal scale rows always 19 anteriorly, 17 by level of 13th ventral and then without reductions until close to the vent (see Appendix). Tail shield slightly variable in shape and size, for example it is more squarely-ended and strongly overhangs the posteriormost subcaudal in CAS 225843 and, to a lesser extent, in 226077. The shield tubercles are all small but vary from being low and worn (e.g., CAS 225842, 226662) to more prominent, pointed and spine-like (e.g., CAS 225843).

Colour pattern generally constant and matching holotype (as figured by Deraniyagala 1941). Posteromedial edges of parietals generally pale (as in holotype and CAS 225842), pigmented in CAS 225843. Tail shield always somewhat orange, but brown marks more or less diffuse and variable in shape (e.g., U- rather than O-shaped in CAS 226662). Pale dorsal band on body always present but variable. For example, it is three (rather than five) scales wide on the anterior half of CAS 226662 and anterior two thirds to three quarters of CAS 225843, 226077, and 244584. The narrow, punctate, darker lines on the other dorsal scale rows and ventrals are a constant feature. Last ventral unpigmented in CAS 225843, 226077, 226662, and 244584.

Distribution, natural history, and conservation: The lost types and only known existing museum specimens of Rhinophis dorsimaculatus   are all from a single locality, Marichchukate, on the northwestern coast of Sri Lanka ( Fig. 3 View FIGURE 3 ). This is lowland and in the dry zone (sensu Legg & Jewell 1995), in contrast to most Sri Lankan uropeltids that occur in the hills of the wet zone. We here report a second locality for R. dorsimaculatus   . On 21 and 23 January 2014, eight live R. dorsimaculatus   were seen at Sannar near Vidattalativu, Northern Province (8º 59’ 30.69” N, 80º 06’ 26.34” E, <20 m elevation) while digging in loose soil and/or on the surface at night following monsoon rainfall. This locality is also northwestern coast dry zone lowland, approximately 40 km north of the type locality ( Fig. 3 View FIGURE 3 ). The habitat was typical dry-zone evergreen forest mixed with shady home garden vegetation. None of the animals was collected but two were photographed ( Fig. 4 View FIGURE 4 ). Data were not recorded for the two photographed animals but their colour pattern, head shields, and vertebral scale counts (235 and 238) closely match those of the lost holotype and the CAS specimens of R. dorsimaculatus   reported here. One of the photographed specimens ( Fig. 4 View FIGURE 4 , left panel) has a more orange dorsal band (as reported for the type material by Deraniyagala 1941, 1955) and the other ( Fig. 4 View FIGURE 4 , right panel) a paler tan band. Both specimens differ slightly from the CAS specimens in that the dark dorsal blotches are more continuous and less asymmetric, and the pale band has more scales with dark marks.

The type and the newly reported locality were, until recently, inaccessible during three decades of civil unrest in Northern Province. After the war (itself cited as a cause of habitat degradation by Abeysiriwardana et al. 2000), the region has experienced rapid deforestation for human settlement. Much of the forest cover in the region of Marichchukate has been cleared. In addition to expanding human settlements, forest has been cleared for agriculture, which might also pose a conservation threat to R. dorsimaculatus   (see also Abeysiriwardana et al. 2000). The second author and colleagues have also seen roadkill specimens of R. dorsimaculatus   in the region. 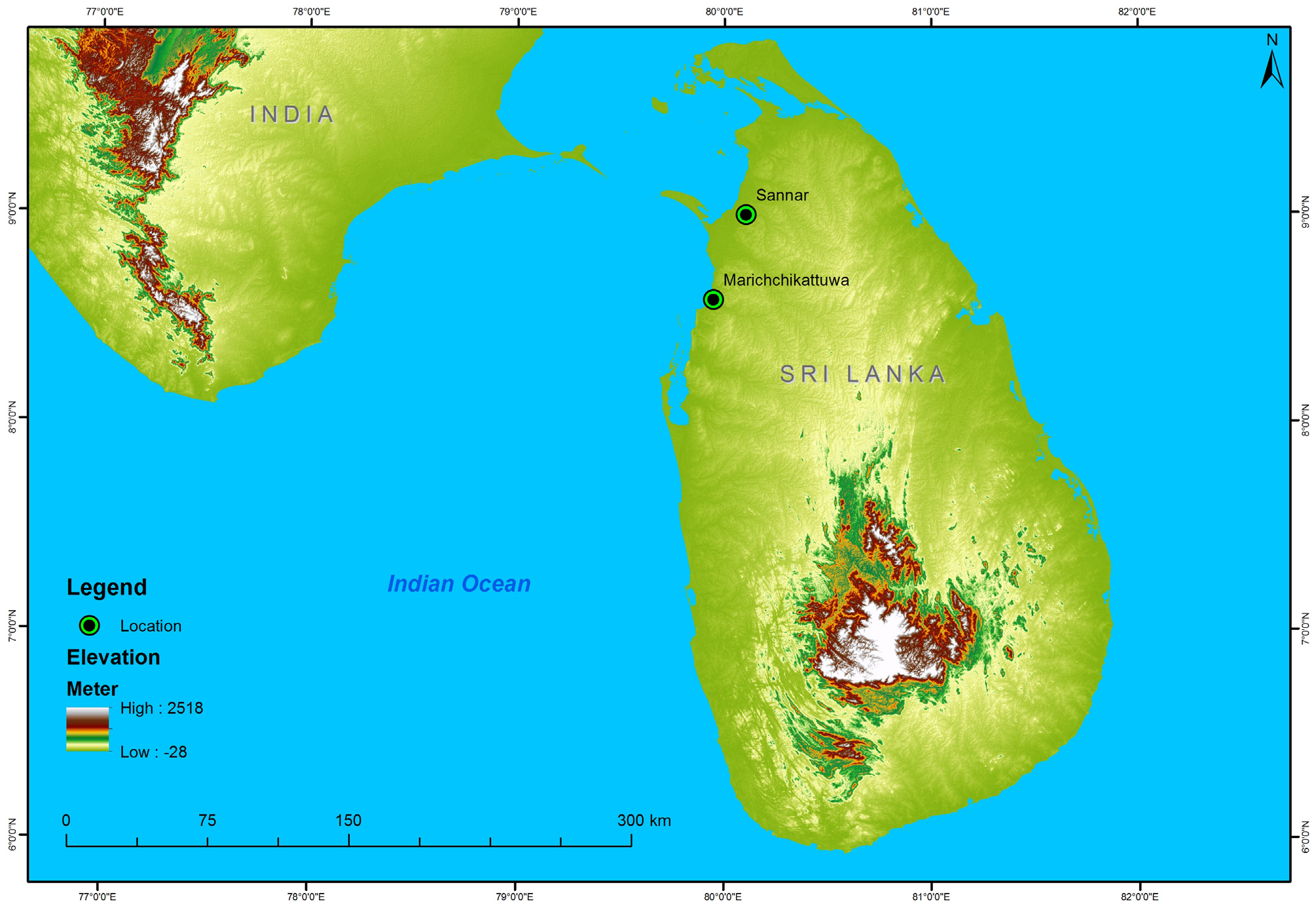