Pronotum wider than long, widest at and behind its middle, narrowed anteriad; hind angles rounded but distinct; dorsal rows each with three punctures; sublateral rows each consisting of one to two punctures; waves of microsculpture oblique, vaguely denser than those on head; microsculpture on anterior angles of pronotum transversally reticulate. Prosternum with longitudinal keel and pair of long macrosetae. Scutellum impunctate, with transverse microsculpture as on pronotum. Elytra short, parallel­sided, wider than long, shorter than pronotum and much narrower than maximum width of pronotum; punctation very dense and shallow, interspaces smaller than diameter of punctures, glossy, with vague minute irregularities; pubescence gray. Wings reduced.

Comparison. Quedius nonseriatus   is closely related to Q. brachypterus Coiffait, 1967   and Q. lgockii Roubal, 1911   (recently revised in Solodovnikov 2004) and is especially similar (and obviously phylogenetically close) to Q. henrii   sp. n. (see below). From all three listed species, Q. nonseriatus   can be easily distinguished by the pale (not piceous black) coloration of the body, and by minor details in the shape of the aedeagus (see Figs. 5–7 View FIGURES 5 – 17 here, and Figs. 14 View FIGURES 5 – 17 –19 in Solodovnikov 2004).

The two known specimens of Quedius nonseriatus   had been labeled in the examined collections as Q. obliqueseriatus Eppelsheim, 1889   (for details see Q. obliqueseriatus   in Solodovnikov 2004). The new species differs from Q. obliqueseriatus   in having only two pairs of punctures on the head disk behind the eyes (posterior frontal puncture and vertical puncture in each pair), and in the structure of the aedeagus (a different form of the median lobe and the paramere; a different shape of the internal sclerotized structures; smaller number and sparser arrangement of the sensory peg setae of the paramere). Also, the two species are allopatric.

Distribution. Probably the new species was collected in the area of the Svanetsky range in Georgia. Except the available labels, which say “Caucasus, Swanetien”, no additional data are known. 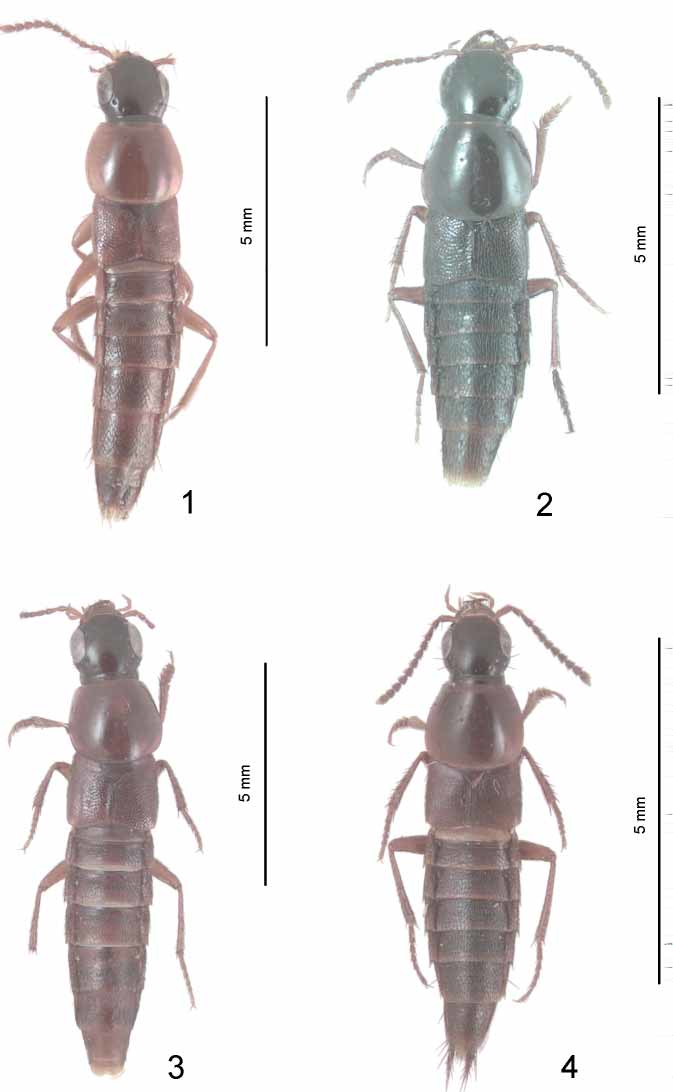