Stems helicoidal, giving raise laterally to secondary branches with pinnate arrangement of cladia. Nodes mostly indistinct, but equivalents of internodes comprising a proximal apophysis (supporting a cladium) and its associated axillar hydrotheca, two alternate hydrothecae above, and a second, distal apophysis together with its axillar hydrotheca. Stem hydrothecae relatively distant, shifted on to the anterior side, small, deeply-immersed into internodes; cladial hydrothecae closely-set, large, adnate for less than half their adaxial length, strongly projecting outwards in opposite directions. Gonothecae borne below the bases of axillar stem hydrothecae; exceedingly long, club-shaped, aperture distal, rounded, borne on recurved (at right angle) apex of gonotheca.

From the Latin ‘ clāva ’, meaning ‘mace’, and ‘ forma ’, meaning ‘shape’, to characterize the morphology of its gonotheca.

The holotype comprises the apical part of a fertile colony; its lightly fascicled stem was obviously branched in open spiral throughout the colony, but only the three distalmost secondary branches subsist, each of which displays a pinnate arrangement of its hydrocladia. The paratype is equally devoid of its very proximal part comprising the hydrorhiza, but possesses a much longer (9 mm) proximal portion of its stem above the origin from stolon; the main tube, accompanied by a couple of accessory counterparts, is repeatedly divided (by transverse nodes) into short segments, each of which bears a hydrotheca and, occasionally, a lateral apophysis immediately below (its associated hydrotheca thus becoming axillar), carrying the stump of a branch. Remainder of stem gives rise to four side branches arranged helicoidally and having pinnately-inserted hydrocladia. Branches, given off in either anti-clockwise (holotype) or clockwise (paratype) manner, composed of a short, quadrangular segment, a succession of 3–4 alternate hydrothecae, and a much longer, regular, hydrocladiate part. The latter, displaying a mostly indistinct division into internodes, is composed of a short, lateral apophysis, an axillar hydrotheca associated to it, two alternate hydrothecae above, and a second lateral cladial apophysis on opposite side, together with its corresponding axillary hydrotheca; cladia alternate along the branch. Apophyses short, each supporting a cladium, from which they are separated through straight nodes; the two rows of apophyses not coplanar, but shifted upwards; cladia divided into thecate internodes through transverse constrictions of the perisarc; there is a short, quadrangular segment proximally; each internode with generally two, occasionally three, hydrothecae, although 1 st internode bearing usually an increased number of hydrothecae, reaching as many as six. Two types of hydrothecae occur within the colony: cauline and cladial, differing much in their morphology. Cauline hydrothecae relatively distant from each other, small, slender, deeply immersed into internodes, with only a short free adaxial part left; tubular, with thick perisarc, free part curved outwards, rim rounded, slightly everted, occasionally renovated once, with no trace of opercular apparatus. Cauline hydrothecae and cauline apophyses distinctly shifted on to the ‘anterior’ side of the stem. Cladial hydrothecae large, tubular, adnate for less than half their length to their corresponding internodes; successive hydrothecae closely-set, free parts strongly projecting outwards in opposite directions; perisarc thin, finely and densely striated; aperture tricuspidate, with an adaxial and two latero-abaxial cusps; abaxial cusps separated by a shallow embayment, while deep, rounded embayments occur between the adaxial and latero-abaxial cusps; opercular apparatus composed of three triangular valves: two latero-adaxial, and a much wider abaxial one; hydranths with 10–12 filiform tentacles; no caecum. Gonothecae given off from below the hydrothecal bases of cauline axillar hydrothecae; club-shaped, exceedingly long, perisarc finely and densely-striated especially on upper half, becoming smooth basally, apex of gonotheca curved abruptly outwards and there carrying a large, rounded aperture; sex could not be ascertained.

None of the nominal species mentioned above displays such strongly bimorphic hydrothecae and forms such exceedingly elongate, club-shaped gonothecae as H. clavaformis  sp. nov. Indeed, the gonothecae of the poorly-known H. distans  and H. plumulifera  were described by Nutting (1904) and Jäderholm (1896), respectively, while those of the well-known H. falcata  are dealt with, among others, by Cornelius (1995). All are short, broadly ovoid, tapering basally, with a round, distal aperture on top of a short neck region. Only specimens of H. franciscana  without gonothecae are known to date.

Unlike its congeners, the new species possesses an opercular apparatus composed of three triangular flaps meeting centrally to form a low pyramidal roof. Vervoort (1993: 185) debated on the composition of this structure (presence of either a single adaxial flap, or of a larger adaxial and a smaller abaxial one, according to the statements of different authors), and concluded that two flaps occurred in the Atlantic material at his disposal.

Despite these morphological peculiarities, the present species is provisionally accommodated within the genus Hydrallmania Hincks, 1868  , on the account of its mode of branching and the unilateral arrangement of the side branches and hydrothecae, pending the availability of additional material suitable for molecular analyses expected to confidently clarify its correct systematic position. 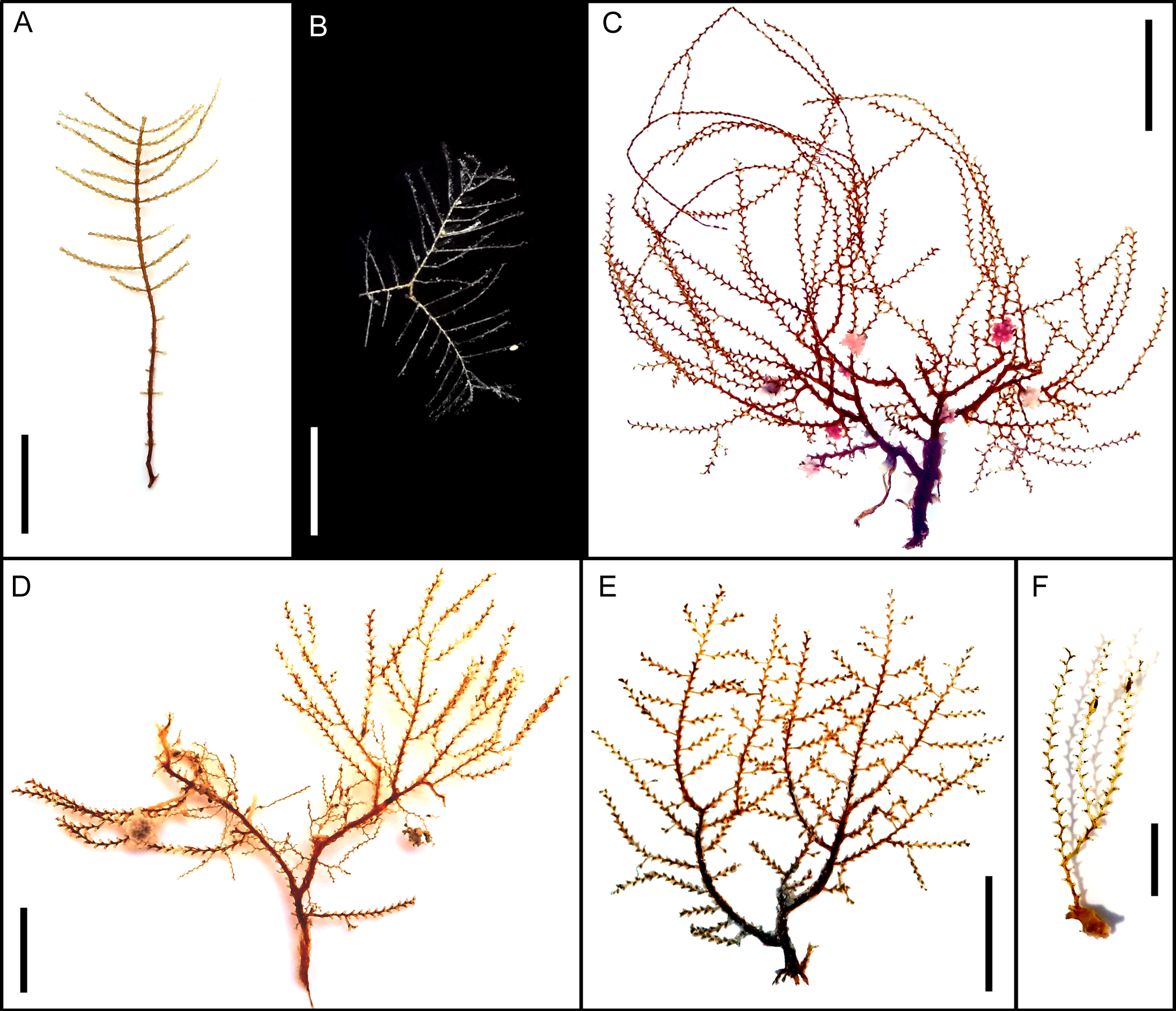 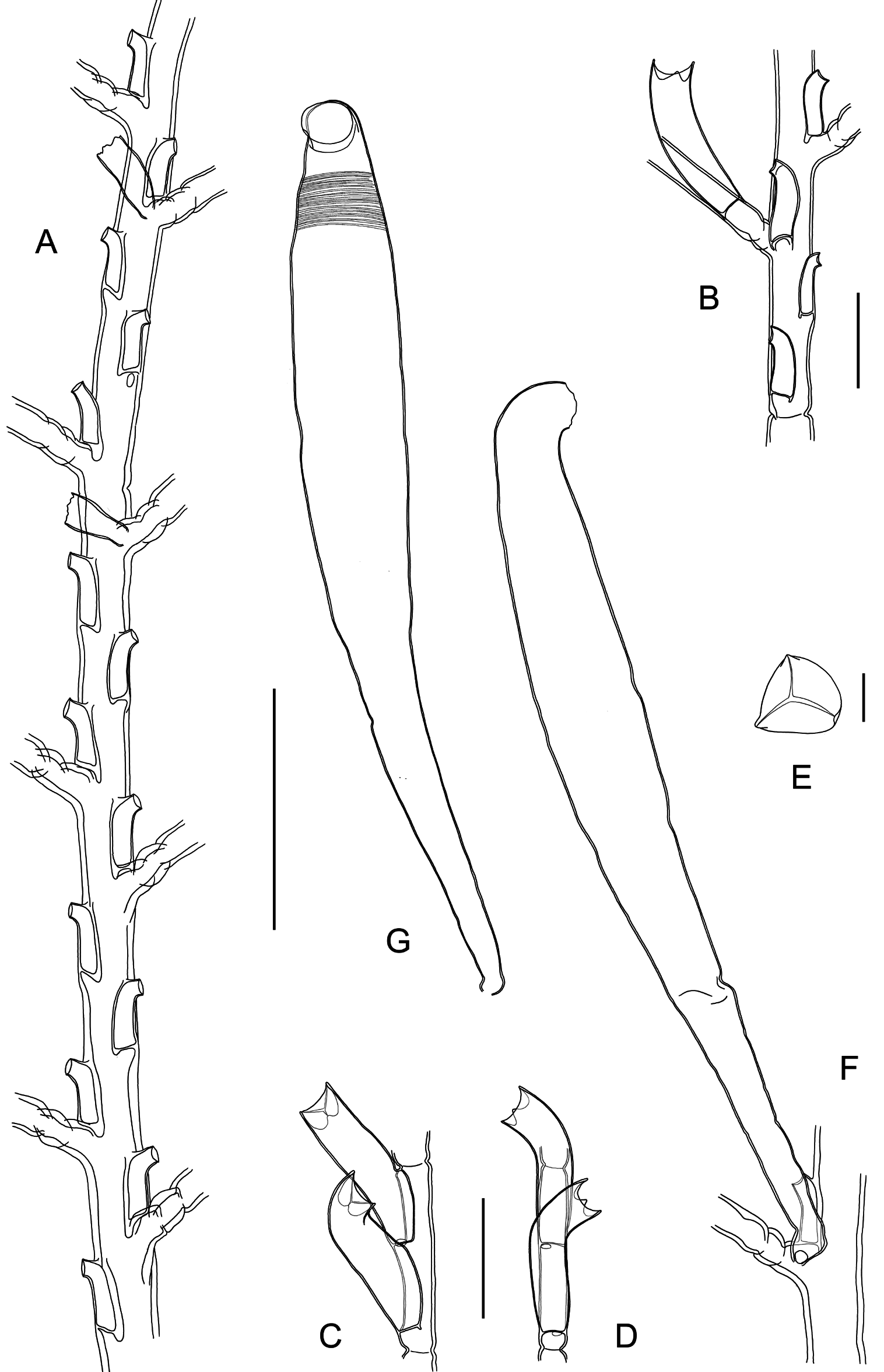