Colony arising from tortuous, branching, anastomosing hydrorhiza creeping on antipatharian host. Stems erect, up to 1 cm high, monosiphonic, unbranched or with, at most, single side branches; proximal part of varied length, though short, ahydrothecate, with smooth perisarc, and basal constriction above origin from stolon; above, remainder of stem hydrothecate, divided into a regular succession of moderatelylong internodes through oblique constrictions of the perisarc slanting in alternate directions, more conspicuous distally; each internode relatively short, widening distally, where it bears a hydrotheca. Side branches, when present, of varied length, given off laterally from below the base of a stem hydrotheca through indistinct apophysis; structure similar to that of stem, except for the first internode that is comparatively longer than subsequent ones. Hydrothecae in two coplanar rows on both stems and branches, alternate, immersed for ⅓ or less into their corresponding internodes; tubular, strongly curved outwards from internode (at nearly right angle), perisarc smooth throughout; proximal abaxial wall distinctly swollen, then straight to slightly concave in middle; free adaxial wall convex, collapsed on distal half over abaxial wall, leaving two broad, lateral ‘wings’ forming a gutter-shaped aperture; the latter, slightly everted distally on abaxial side, rim occasionally bearing 1–2 renovations; adnate adaxial wall convex, ending basally in perisarc plug; there is no hydrothecal base; opercular apparatus not clearly discernible, but likely composed of one adaxial flap. Hydranths badly-preserved, though there is no evidence of an abaxial caecum; tentacle number could not be ascertained. Gonothecae not observed.

This is a very delicate, small species, with sparingly-branched stems and strictly alternate hydrothecae, distinctly curved outwards, adnate for (at most) ⅓ of their adaxial length. There are only three congeners displaying an alternate arrangement of their hydrothecae, namely: D. inornata Nutting, 1927  , D. nuttingi Stechow, 1913  , and D. paarmani Nutting, 1904  .

However, D. inornata  from the Philippine region forms rather tall (7.5 cm high), pinnate colonies, and its hydrothecae are deeply immersed, leaving only about ¼ of their adaxial wall free from the internode ( Nutting 1927). In the Japanese D. nuttingi  , the hydrothecae are adnate for less than half their length, and their free parts point “obliquely upwards, not bending”; in addition, their wall is provided with five longitudinal ridges: two latero-adaxial, two lateral and one abaxial ( Hirohito 1995). The western Atlantic D. paarmani  forms large (7.6 cm high), pinnate colonies ( Nutting 1904); stem hydrothecae “are arranged in pairs basally but gradually, towards the top part of the colony, they become sub-alternate”, although the cladial ones are always alternate ( Vervoort 1972). The thecae are free for only ⅓ from their corresponding internodes, and curve only gently outwards ( Nutting 1904). 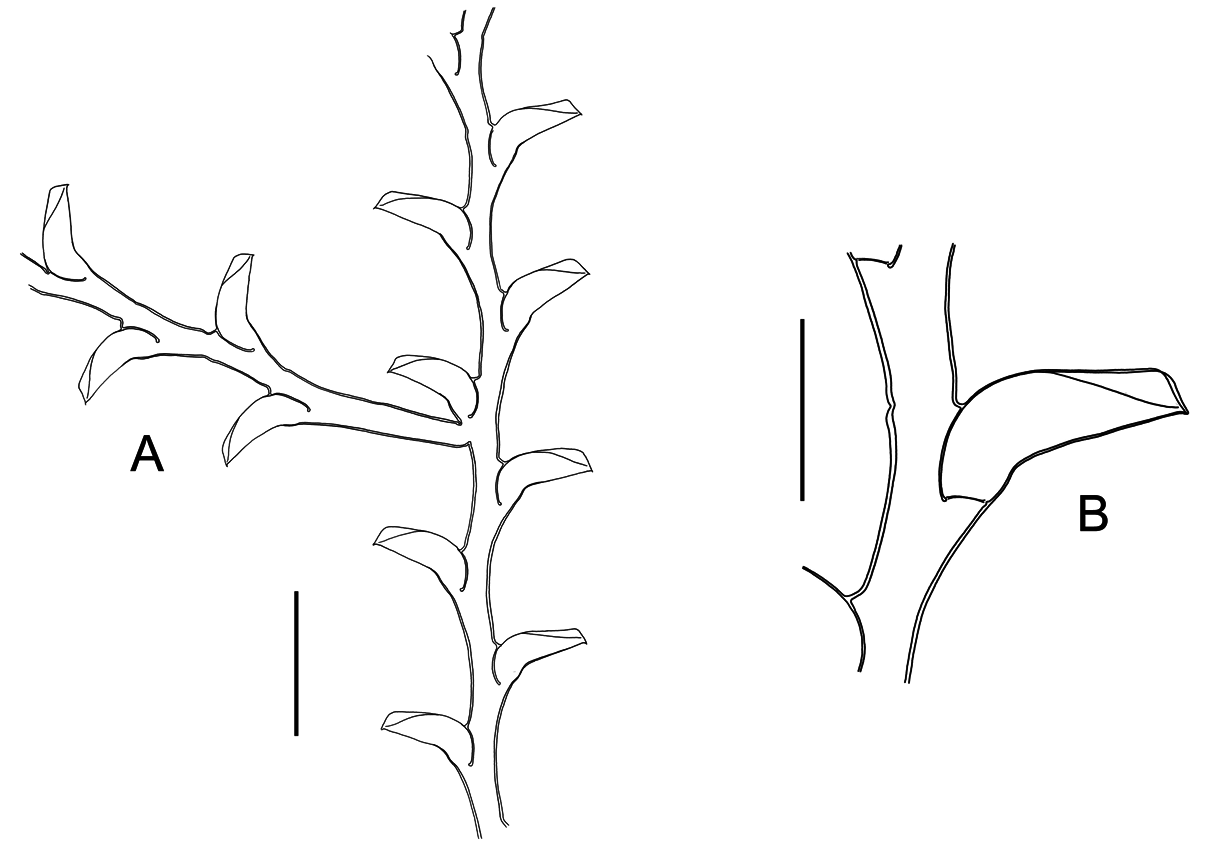