Profuse colonies comprising multiple, possibly auto-epizoic stems, forming a common, fascicled base. Above, stems monosiphonic, divided into long internodes, composed of a proximal pair of hydrothecae and a distal pair of cladial apophyses together with their associated axillary hydrothecae. Cladia with proximal, unpaired hydrotheca facing downwards, followed by additional pairs of hydrothecae adopting gradually a strictly opposite arrangement towards the distal end. Hydrothecae large, tubular, adnate for about half their adaxial length; free adaxial and abaxial walls straight and imperceptibly convergent distally. Gonothecae of varied origins, urn-shaped, laterally flattened, with 6–7 convex ridges on their broadest sides, these becoming concave on their narrowest sides; aperture on top of an apical dome.

Colonies erect, up to 11 cm high, composed of either independent or basally-fused stems arising from tortuous, creeping, branching, anastomosing hydrorhizae. Stems unbranched, either monosiphonic or lightly fascicled basally; in the latter case, auxiliary tubes run up and down the stems, forming additional hydrorhizal fibers. In profuse colonies, there seems to be a tendency to auto-epizoism, with new stems settling down on older ones, and forming bunches arising from a common, fascicled base. Basal parts of individual stems, above their common base, of varied length, monosiphonic, ahydrothecate and acladiate, with smooth perisarc; remainder of stem, comparatively longer, divided into regular internodes by means of transverse constrictions of the perisarc, more obvious in the upper parts; each internode long, composed of a pair of opposite hydrothecae proximally and a pair of opposite apophyses above, together with their associated axillary hydrothecae; pairs of hydrothecae widely-spaced; stem apophyses supporting the cladia distant of 4–4.5 mm; there is no very distinct node at junction between apophysis and cladium, although a slight notch in the perisarc of upper side could sometimes be noted. Most stem hydrothecae, especially those situated proximally, damaged and not regenerated subsequently. Cladia up to 17 mm long, given off at wide angle with the stem; pairs of opposite cladia coplanar; divided into irregular internodes by means of transverse nodes; proximal most internode with a long, smooth, athecate base, an unpaired hydrotheca facing downwards, followed by a distinctly subopposite pair of hydrothecae, and a distal pair of nearly opposite hydrothecae; occasionally, this internode is devoid of the second, and hence distalmost, pair of hydrothecae, the latter being confined to the next internode; subsequent internodes with either two or three strictly opposite pairs of hydrothecae; a fully-formed cladium comprises, besides the unpaired proximal hydrotheca, up to nine pairs of thecae. In most colonies, many cladia, especially the basal ones, show signs of breakage and subsequent regeneration (a distinctive, transverse breakage line could be noted); in this case, the cladia comprise exclusively pairs of strictly opposite hydrothecae, the proximal most, unpaired one being replaced. Hydrothecae on both stems and cladia form two parallel, coplanar rows; almost tubular, adnate for slightly more than half their adaxial length to the corresponding internodes; free adaxial and abaxial walls slightly and gradually convergent towards distal end; aperture circular, rim slightly everted; hydranths with ca 18 filiform tentacles. The gonothecae arise often in pairs from scars of damaged hydrothecae on proximal parts of the stems; occasionally, they can replace a cladium of a pair, arise from auxiliary tubes of the stem, and are also profusely given off from the hydrorhiza. Gonothecae similar in both sexes (although sexes not always recognizable with certainty), urn-shaped, bilaterally symmetrical, laterally flattened; they show their narrowest side when the colonies are seen frontally; on their broadest sides, they are provided with 6–7 convex, rounded crests, more curved distally, and comparatively less arched basally; the narrowest sides show the same crests, but they are concave therein; distally, a dome-shaped protuberance bearing apically the aperture; ca six large, ovoid oocytes per gonotheca.

Through its fascicled stems and distinctive gonothecae, this species comes close to S. hians  (see above) and the material incorrectly assigned by Vervoort & Watson (2003) to S. protectum  (see above). No other nominal species, besides S. hians  and S. rectangulatum  sp. nov., are known to possess fascicled stems. The differences between these two hydroids could be noted in Fig. 8View Fig. It should be noted that, as stated above, Vervoort & Watson’s material possibly comprises a mix of species, of which one (NZOI P34, slide 2225) has proportionally longer hydrothecae than S. rectangulatum  sp. nov., and seems therefore specifically different, while the other (NMNZ BS904, slides 4285) has shorter hydrothecae, and could also belong to another species. 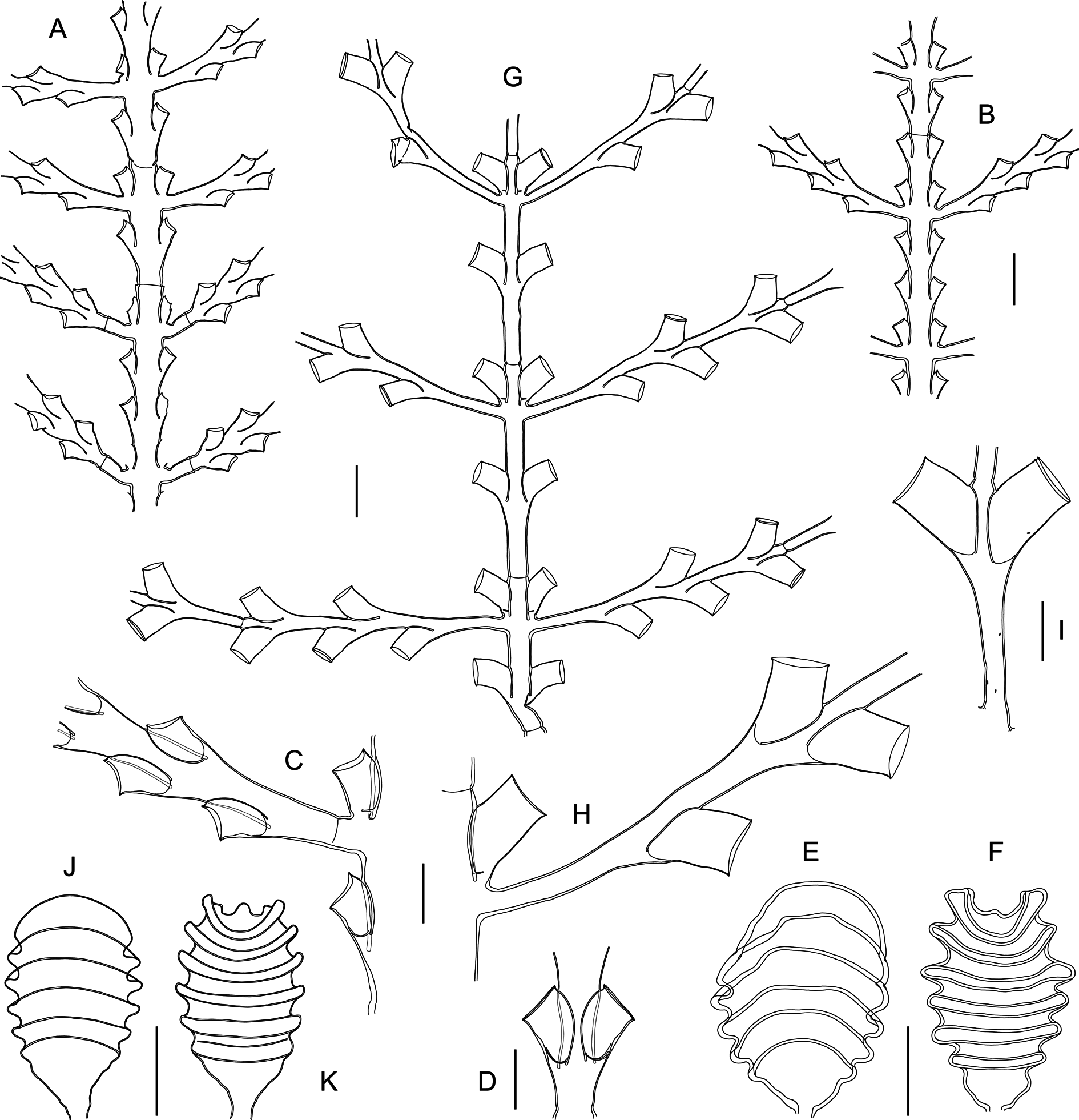