Colony erect, 6.5 cm high, relatively stiff when out of liquid, arising from much branched, rhizoid hydrorhiza firmly attached to the substrate. Stem simple, strongly fascicled proximally, grading to monosiphonic 4 cm after its origin from stolon. Main tube composed of a long, straight, proximal part devoid of cladia and having irregularly wrinkled to smooth perisarc, and a comparatively shorter, distal part bearing hydrocladia, distinctively curved downwards. Proximal part undivided, except for a distal, short, quadrangular segment separating it from the distal hydrocladiate part through two broad, conspicuous transverse nodes; basal and quadrangular segments provided distally with large, prominent nematothecae with distinct, apical, rounded aperture ( Fig. 18AView Fig, arrowheads). Hydrocladiate part divided into internodes through transverse constrictions of the perisarc, distinct basally, becoming obsolete distally. Each internode comprises a short, lateral apophysis (supporting a cladium), an axillar nematotheca, as well as a second, lateral nematotheca in middle of opposite site; all apophyses given off on same side of the stem. The two rows of stem nematothecae distinctly shifted on to the ‘anterior’ side of the colony in the lower portion of the hydrocladiate part of the stem, becoming gradually almost coplanar distally; similarly, the cladia adopt a more lateral arrangement along the stem towards its distal end. Axillar nematothecae tubular on proximal portion of the hydrocladiate part of the stem, becoming mere mamelons distally; no distinct aperture could be noted on any of them. Nematothecae in opposite row comparatively less prominent, resembling mamelons in shape, provided occasionally with slit-like aperture in axil formed with the corresponding stem internode ( Fig. 18A, CView Fig, arrowheads). Cladia distant of 1–1.5 mm, up to 2 cm long, divided into up to 18 thecate internodes by means of transverse nodes; proximal most internode comparatively longer than subsequent ones; internodes moderately long, each provided with a hydrotheca distally. Hydrothecae alternate but conspicuously shifted on to the upper side of cladia, the two rows forming a very acute angle; long, tubular, lower halves gradually tapering basally, adnate to the internode for a minute portion of their adaxial wall; distally, a large, circular aperture surrounded by three prominent, pointed, triangular cusps (one abaxial, two latero-adaxial) separated by large, deep, rounded embayments; rim thickened; a perisarc plug extending downwards the adnate adaxial wall of hydrotheca at junction with its base; a rounded fenestra below the base, as attachment site for the gonotheca. Hydranths large, attached to lower ¼ of inner hydrothecal wall, provided with ca 16–20 filiform tentacles. Gonothecae club-shaped, with large, semi-circular, subterminal aperture, in a rounded depression in the gonothecal wall on side facing the hydrotheca. Perisarc of both hydro- and gonothecae almost filmy and easily collapsible, explaining why so many of those are partially or totally broken.

Vervoort (1993) noted “perisarcal protuberance[s]” in the axil formed by the cladia with the stem, but not on the opposite side of the stem internodes, and did not comment on their significance. These structures, occasionally showing distinct apical apertures, or apertures in the axil formed with the stem internodes, are thought to be nematothecae, although an accumulation of nematocysts could not be confirmed in this material with badly-preserved coenosarc.

Only known from off New Caledonia ( Vervoort 1993; present study). 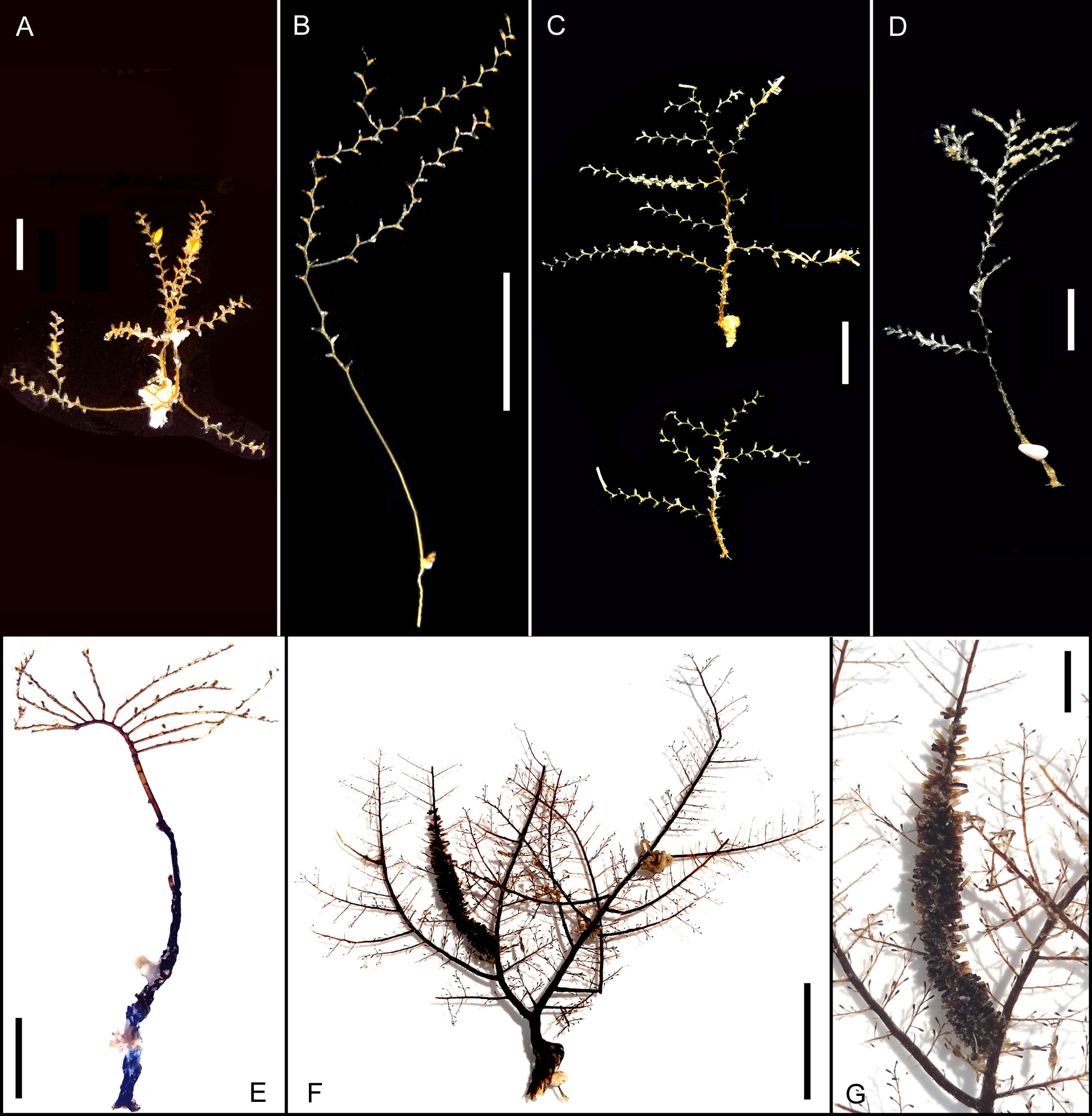 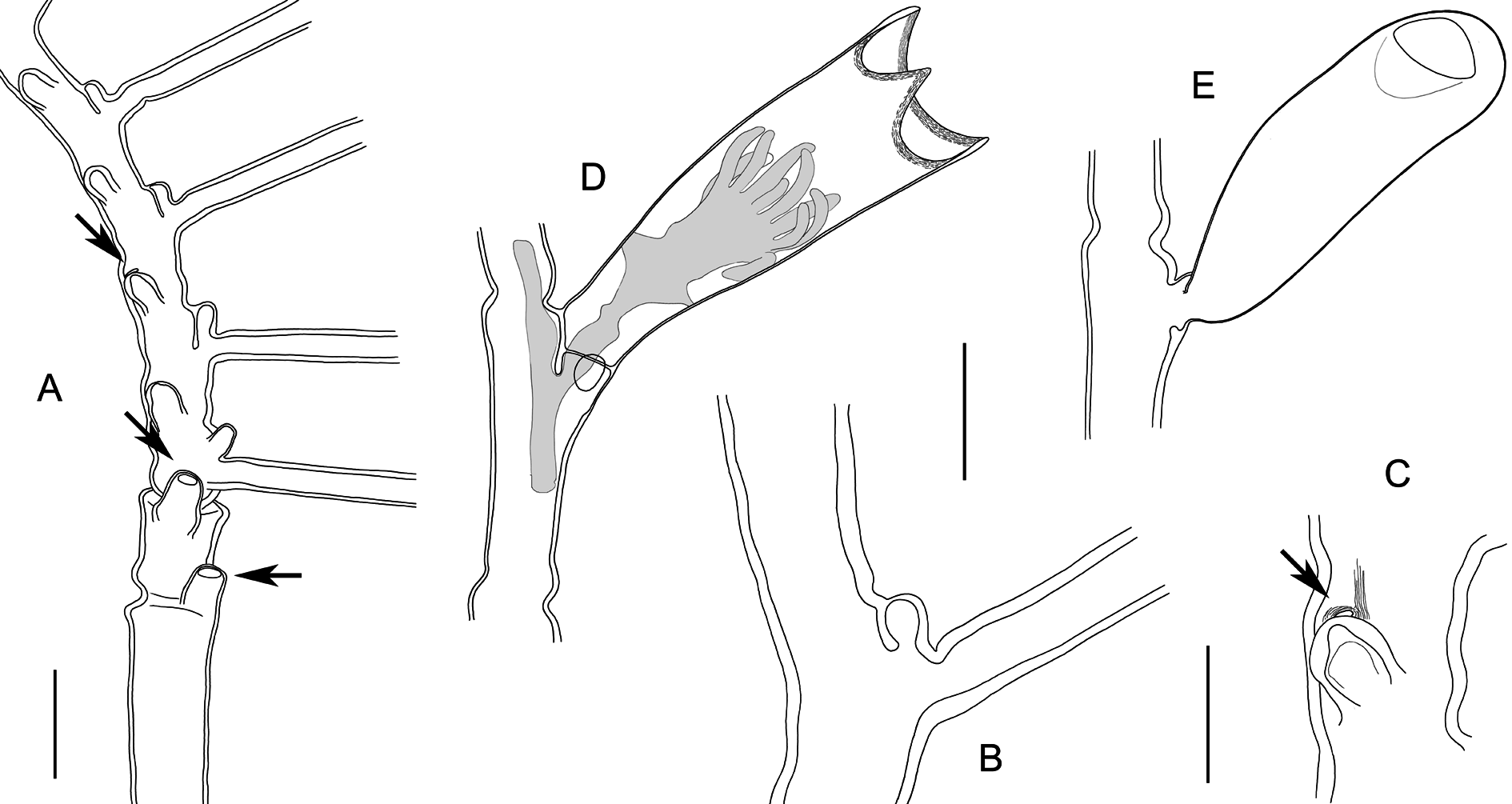