Gibson, Gary A. P., 2017, Synonymy of Reikosiella Yoshimoto under Merostenus Walker (Hymenoptera: Chalcidoidea: Eupelmidae), with a checklist of world species and a revision of those species with brachypterous females, Zootaxa 4255 (1), pp. 1-65: 42-45

Etymology. A combination of platys (broad) and scapus (stem), in reference to the very strongly compressed scape of females of this species.

Description. FEMALE (habitus: Fig. 90 View FIGURES 90 – 97 ). Length = 2.1–2.5 mm. Head ( Fig. 91 View FIGURES 90 – 97 ) dark brown or at most with very slight purple to bluish luster on frontovertex under some angles of light; in frontal view subquadrate, about 1.2× as wide as high, and in lateral view lenticular, about 1.6× as high as long, but with lower face abruptly angled relative to much longer, uniformly curved frontovertex; frontovertex and parascrobal region along about dorsal half of scrobal depression smooth and shiny except sometimes for scattered setiferous pits, and frons at least with small depression below anterior ocellus and sometimes with more distinct sulcus extending partly between ocellus and scrobal depression, but about ventral half of parascrobal region and scrobal depression strongly, transversely reticulate-rugose, scrobes and dorsal surface of interantennal prominence above level of toruli finely coriaceous, and remainder of interantennal prominence and lower face more or less granular; sculptured part of parascrobal region, more strongly sculptured part of interantennal prominence, and lower face uniformly setose with dark setae, but frontovertex and smooth part of parascrobal region with only sparse, scattered dark setae sometimes originating from shallow depressions or pits, and scrobal depression and more finely sculptured part of interantennal prominence bare; scrobal depression deep, abruptly inclined above interantennal prominence, with lateral margin directed dorsally near lateral limit of torulus to differentiate distinct parascrobal region along lower inner orbit, but dorsally more ^-like incurved toward median and separated from anterior ocellus by distance similar to LOL; ratio of OOL: POL: LOL: MPOD = 1.5: 3.25: 1.9: 1.0. Antenna ( Fig. 92 View FIGURES 90 – 97 ) dark brown; scape foliaceously compressed, about 1.6× as long as greatest width, broadest apically and narrowed basally, with ventroapical margin extending to apex of fl1 when flagellum held at right angle to scape, the inner surface uniformly coriaceous-alutaceous, setose, and in one plane, but outer surface with expanded region thinner, bare, and more finely sculptured than dorsally thicker, setose part; pedicel about twice as long as wide and about as long as combined length of basal three funiculars; flagellum robust with fl1–fl8 subequally long and strongly transverse, with clava about 1.75× as long as wide and almost as long as combined length of apical four funiculars. Labiomaxillary complex dark brown but mandibles lighter, reddish.

Remarks. Although the species description is based on four females, one is mounted on a card triangle upside down and two of the other three are contorted so that several features are described based on just one female. However, antennal structure readily distinguished females from those of all other brachypterous Merostenus   , the scape being foliaceously compressed and the flagellum having strongly transverse funiculars ( Fig. 92 View FIGURES 90 – 97 ). Females of M. longistylus   also have the scape obviously compressed, but the flagellum has more elongate funiculars similar to the other treated species ( Fig. 59 View FIGURES 56 – 65 ). Females of M. platyscapus   also differ from the other four Afrotropical excavatus   -group species in apparently having a bare metapleuron. However, as discussed under monophyly and relationships of the excavatus   species-group, there is a setose region below the metapleuron between the acropleuron and metacoxa ( Fig. 95 View FIGURES 90 – 97 ) that might represent a secondarily differentiated part of the metapleuron. Scutellar-axillar structure is unique among the species treated, with each elongate-slender axilla as a dorsolongitudinally carinate angulate lobe and with the scutellum narrowed into a similarly slender carinate lobe over almost the anterior two-thirds ( Fig. 94 View FIGURES 90 – 97 ). The single uncontorted female appears to have both the anterior margin of the mesoscutum ( Fig. 93 View FIGURES 90 – 97 ) and the propodeum behind the dorsellum raised such that V-like margins are formed, into which the posterior margin of the pronotum and dorsellum, respectively, fit into when the mesonotum is arched. However, better preserved and mounted specimens are required to confirm this structure. Although males are unknown, it is quite possible they have the metapleuron partly setose anteroventrally, as discussed under monophyly and relationships of the excavatus   species-group. 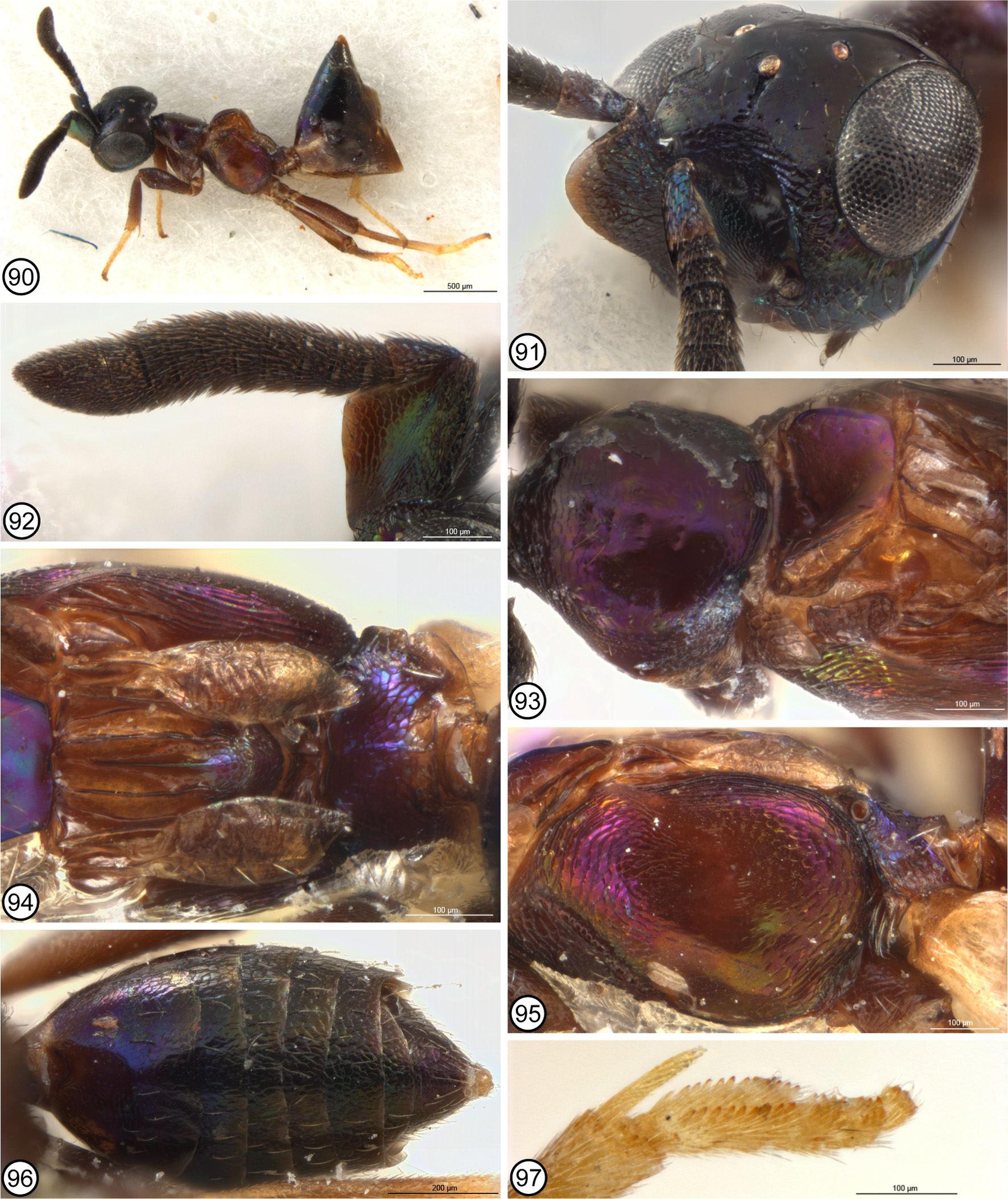 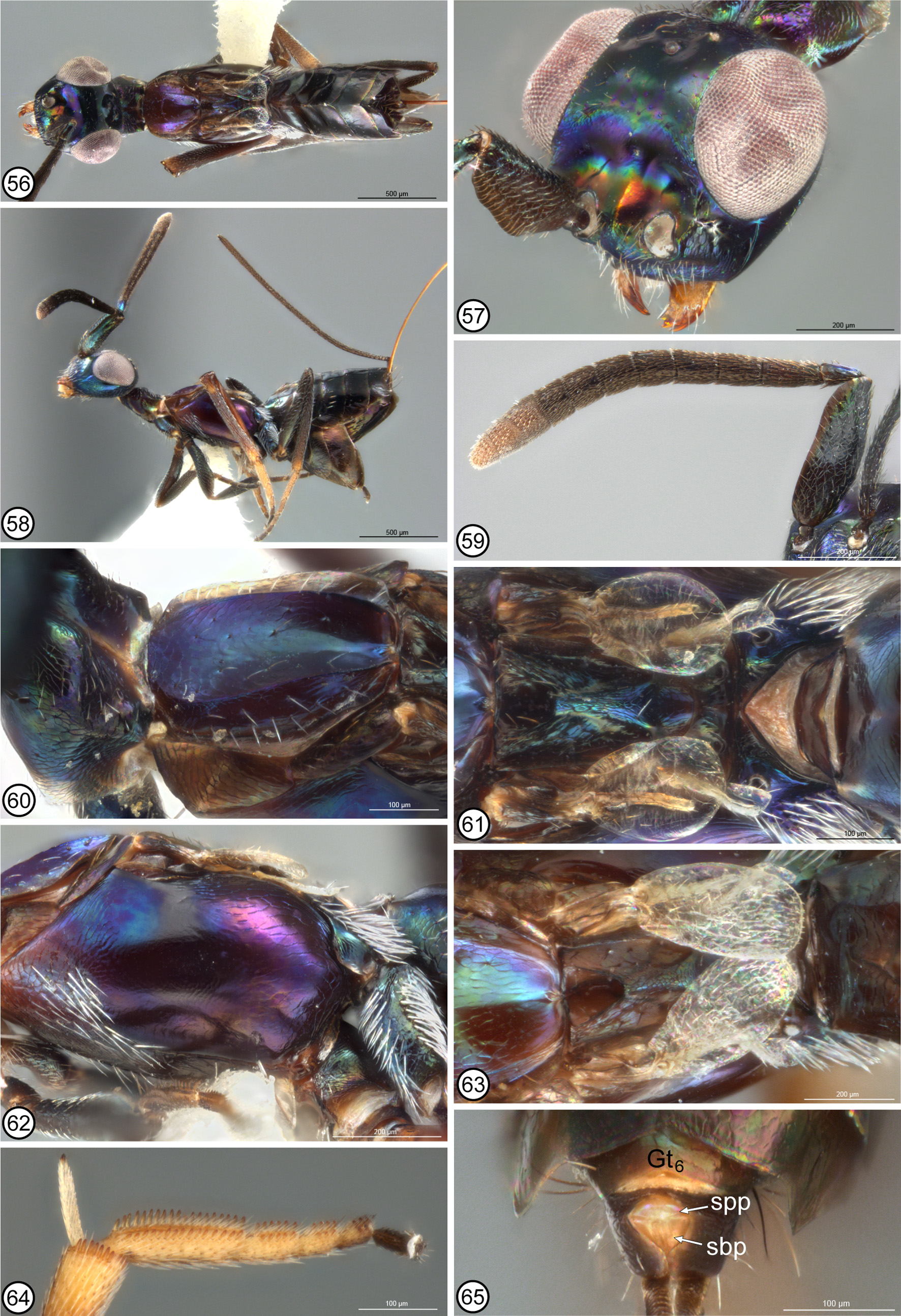