Gibson, Gary A. P., 2017, Synonymy of Reikosiella Yoshimoto under Merostenus Walker (Hymenoptera: Chalcidoidea: Eupelmidae), with a checklist of world species and a revision of those species with brachypterous females, Zootaxa 4255 (1), pp. 1-65: 25-28

Etymology. A combination of the Greek prefix di - (two) and stigma (spot), in reference to the two pits on the mesoscutum that uniquely differentiate females of this species.

Description. FEMALE (habitus: Figs 32, 34 View FIGURES 31 – 38 ). Length = 2.8–3.1 mm. Head ( Fig. 31 View FIGURES 31 – 38 ) dark brown with variably distinct bluish to bluish-green luster under some angles of light or all but frontovertex lighter orangish-brown; in frontal view subquadrate, about 1.2× as wide as high, and in lateral view lenticular, about 1.6× as high as long with anterior surface uniformly curved; face in smaller females mostly meshlike coriaceous with parascrobal regions and scrobal depression dorsolaterally somewhat more strongly sculptured, and in largest female frontovertex coriaceous-reticulate and parascrobal regions quite distinctly, though shallowly reticulate; entirely setose with dark setae except for bare scrobal depression, with setae on frons mostly separated by distance equal to or slightly greater than anterior ocellar diameter; scrobal depression transversely Π-shaped above convex dorsal surface of interantennal prominence, the lateral margin curved dorsally near lateral limit of torulus so distinct parascrobal region differentiated, and dorsomedially with shallow depression on either side of midline, the depressions sometimes delimited ventrally by transverse ridge or carina, and dorsally above depressions smoothly merged into frons so dorsal limit not distinct, but separated from anterior ocellus by distance greater than LOL; ratio of OOL: POL: LOL: MPOD = 1.1: 2.5: 1.6: 1.0. Antenna ( Figs 31, 32, 34 View FIGURES 31 – 38 ) dark brown or scape basally variably extensively lighter, yellowish; scape slender, about 4.7× as long as apical width, and slightly curved; flagellum clavate with fl1 longer than wide and at least fl2–fl5 obviously longer than wide, but fl6–fl8 shorter, slightly longer to slightly shorter than wide [length(width) of pedicel and flagellomeres = 16(9), 10(7), 19(8), 19(10), 17(13), 15(13), 15(14), 15(15), 14(15), 37(17)]. Labiomaxillary complex and mandibles same color as head.

Remarks. As discussed within the section on monophyly and relationships of the excavatus   species-group, M. distigma   undoubtedly forms a monophyletic group with M. micropterus   , M. reticulatus   and M. speculum   based on metapleural structure and setation, similar propodeal structures, and similarly structured scutellar-axillar complexes. Females of M. distigma   differ from those of all other known Merostenus   , brachypterous or not, by the presence of two circular pits laterally on the mesoscutum, on the mesoscutal lateral lobe just within the anterior half ( Fig. 33 View FIGURES 31 – 38 : arrows). I have not seen such pits in any other eupelmid, but presence in the three available females demonstrates it is not an aberration. All three females also have two variably distinct paramedial depressions dorsally within the scrobal depression ( Fig. 31 View FIGURES 31 – 38 ) and one or more depressions or pits in a line laterally on the metacoxa basally. The unique holotype of M. speculum   also has paramedial depressions at the dorsal limit of the scrobal depression, but lack the mesoscutal and metacoxal pits. Females of M. distigma   are intermediate in sculpture between M. reticulatus   and those of M. micropterus   and M. speculum   , the head, mesoscutum and gaster of M. reticulatus   being much more coarsely reticulate and those of the latter two species more smooth and shiny. The different sculpture patterns are also correlated with different setal patterns. Females of M. reticulatus   are the most densely setose whereas those of M. micropterus   and M. speculum   the most sparsely setose. Although a relative feature, the difference is most easily quantifiable on the mesoscutum. Females of M. reticulatus   have the dorsally concave part of the mesoscutum entirely, uniformly setose ( Fig. 100 View FIGURES 98 – 105 ), whereas the setae are reduced to only a single row laterally on the inclined surface of the lateral lobe of M. distigma   ( Fig. 33 View FIGURES 31 – 38 ) and to just one or two setae laterally on the inclined surface of the lateral lobe in M. speculum   ( Fig. 118 View FIGURES 115 – 123 ) and M. micropterus   ( Fig. 86 View FIGURES 83 – 89 ), respectively. Females of M. distigma   share comparatively long fore wings extending to the base of the gaster with all but M. micropterus   , and a marginal fringe apically with all species except M. reticulatus   . 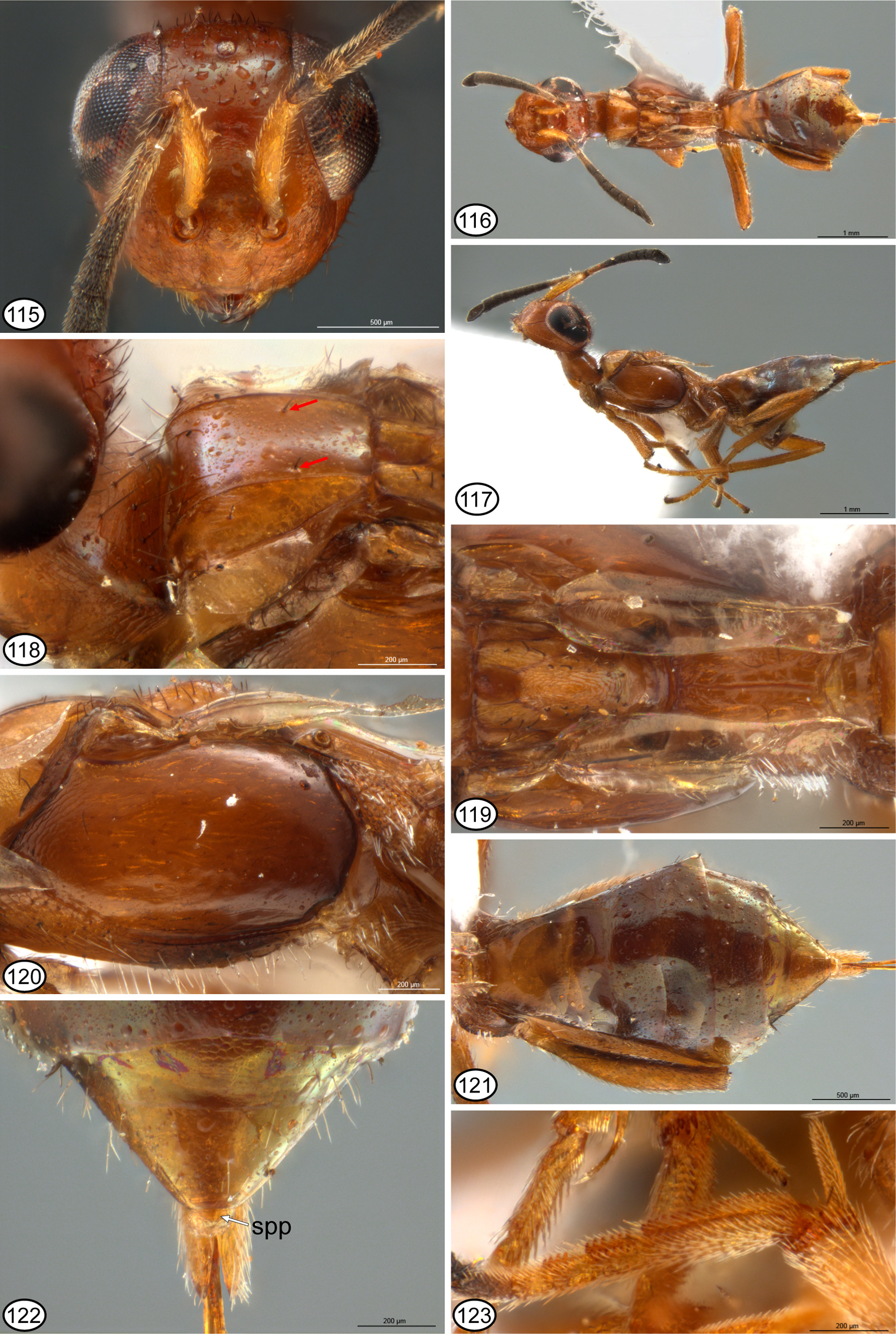