On 28 occasions between May 2001 and November 2004 the first author collected 97 specimens of P. subtilissima  ( CMC) in mixed coniferous woods in Point Pleasant Park. This species was not reported previously from North America  ( Figures 1View FIGURE 1 and 2View FIGURE 2). In many living specimens the elytra appears significantly more rufous in coloration in comparison with the pronotum and abdominal segments, and is paler laterally and in the epipleural region.

Within this forest P. subtilissima  is commonly encountered primarily on limbs and trunks of recently fallen or damaged Pinus strobus  , but also occasionally on Picea ruben  s, P. glauca  , Betula papyrifera  and (once) on Amelanchier laevis Wieg. The  beetle is frequently observed moving on the surface of the bark, hiding beneath bark scales, or in litter on the forest floor. It is also found in galleries excavated under the bark by scolytines, with the principal species being Crypturgus pusillus (Gyllenhal)  , Hylurgops rugipennis pinifex (Fitch)  , Ips grandicollis (Eichhoff)  , Ips pini (Say)  , Orthotomicus caelatus (Eichhoff)  , and Pityogenes hopkinsi Swaine  ( CGMC).

Phloeocharis subtilissima  has also been found to be abundant under the bark of fallen red maple ( A. rubrum  ) in a rather different environment which is bereft of scolytine galleries. Other invertebrates present in this niche include the Coleoptera  Laemophloeus biguttatus (Say)  ( Laemophloeidae  ) and Phyllodrepa humerosa (Fauvel)  ( Staphylinidae  ) in addition to podurid Collembola, and juvenile millipedes (Diplopoda). In this regard it seems to be somewhat generalist in its ecological requirements.

Adult P. subtilissima  were collected each month from March to December with the exception of August. Sampling during the winter months, when there was considerable snow cover and temperatures were regularly below freezing, revealed that the adults are active on sunny days when the sub­cortical environment was observed to be warmed and defrosted. Peeling away the bark revealed individuals moving around and showing no apparent signs of torpor. In this pattern of being active during the winter it is similar to the recently described sympatric species, Leptusa jucunda Klimaszewski and Majka  , with which it co­occurs in Point Pleasant Park ( Klimaszewski et al. 2004). The latter species, however, is found as an adult only from mid­November to the end of April. 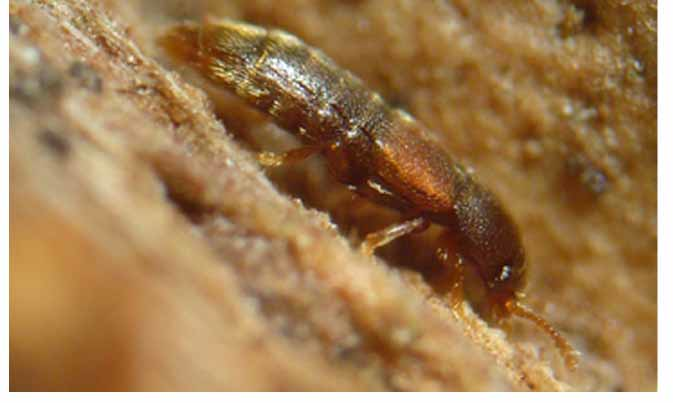