Lucas (1851) described Oedipoda insignis  from Algerian desert (Kefoum-Tebouc, the ♀ holotype, that should be preserved at MNHN, is not present there and probably it has been lost). According to Kirby (1910), its synonyms are Eremobia jamini Lucas, 1853  (type-locality Biskra, Algeria) and Batrachotettix elephas Saussure, 1884  (type-locality South Africa). Following authors have repeated his opinion. Nevertheless, Saussure (1884) described only the female of B. elephas  and from his writing it seems evident that he referred to a species of Pamphagidae  with sexual dimorphism (winged male, apterous female); in fact he wrote: “ Elytra et alae? ”; additionally, he described a femur shape (with enlarged upper and lower borders) that is different from that of T. insignis  ; thus, seemingly he referred to a species of South African Porthetinae  , not a Thrinchinae  , subfamily absent South of Sahara  . Consequently, this taxon should be removed from the synonyms of T. insignis  .

Within the series of specimens examined by me, tegmina veins and the number of their branches appeared more or less variable ( Figs. 60–71View FIGURES 60 – 75. 60 – 71), independently from the geographic area of origin, including also topotypical locality of T. ouarzazatensis  . This occurs frequently also in the related genus Tmethis  ; these characters indeed are not used to separate taxa in Thrinchinae  . Concerning the ratio between the width and the length of metazona, I measured it in 50 specimens of both sexes with characters of T. insignis sensu Yin et al. (2011)  , and found in 40 cases a width shorter than length, in 2 cases width and length resulted equal, and in 8 width was longer than length. I carefully examined latter specimens and actually they showed a stout pronotum, clearly laterally enlarged. However, this sometimes occurs in Pamphagidae  , mainly in species with dorso-ventrally compressed body, as Tuarega  , and also Tmethis  , where this ratio is very variable (cf. Figs. 73, 75View FIGURES 60 – 75. 60 – 71 and compare them with Fig. 74View FIGURES 60 – 75. 60 – 71). Within long series of Pamphagidae  it is possible to observe single specimens showing stouter and wider body, as previously reported by Uvarov (1943). In addition, Tuarega insignis  is a long-winged insect ( Fig. 72View FIGURES 60 – 75. 60 – 71), that is able to carry very long flights; this consents to cross wide desert areas without being subject to any kind of isolation. In absence of additional elements (e.g., biomolecular analysis), this is a further reason to consider the newly described species of Tuarega  from Sahara  as synonyms of T. insignis  , a species that covers all Sahara  desert. 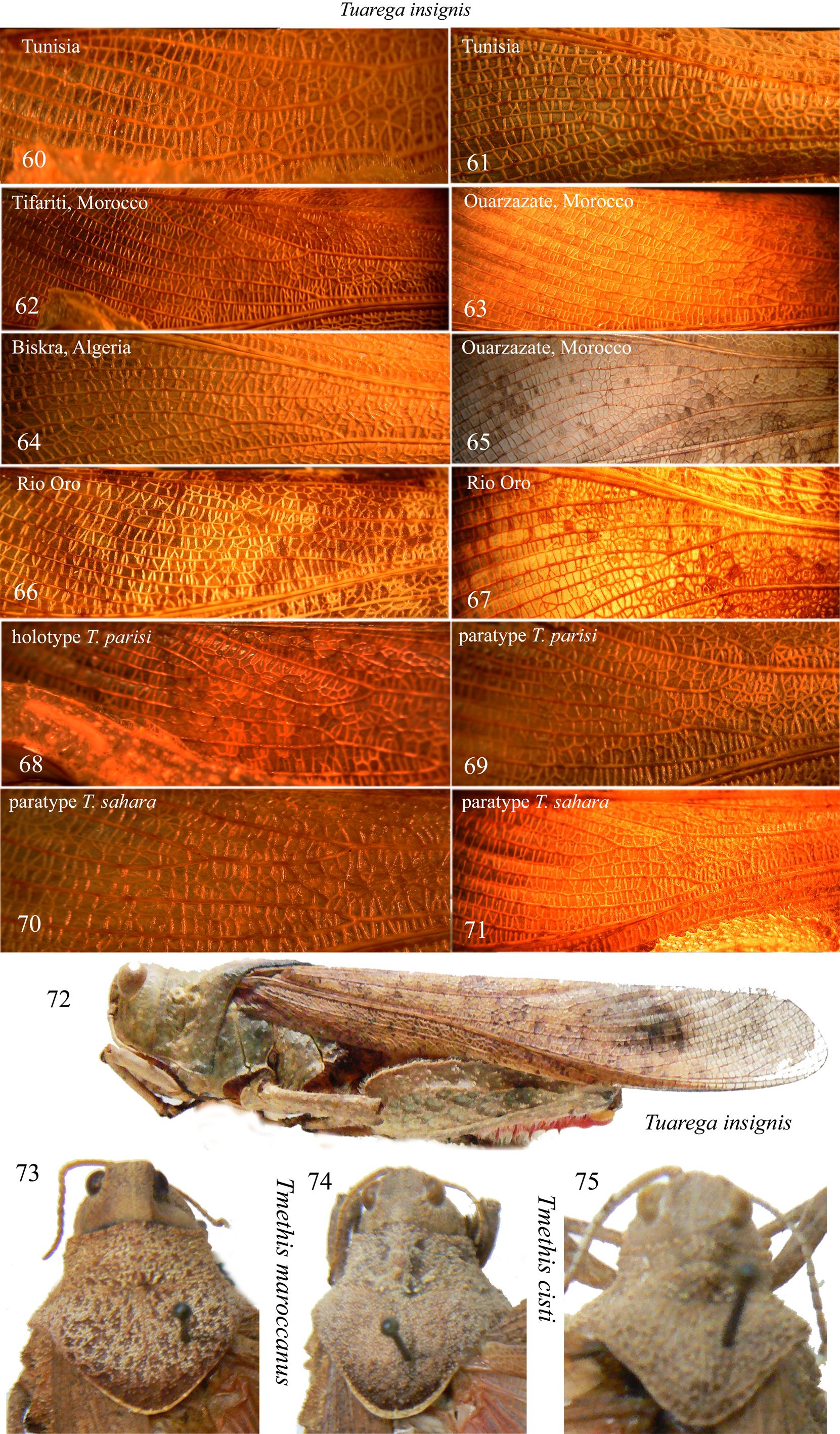