Synonyms (first usage of each synonym only)

PHYLOGENY AND TAXONOMY OF G. PERUANUS   201

Although the type is a skin and skull in good condition, the right zygomatic arch is broken and the palate is partially broken and unclean, making it difficult to visualize the palatine fenestrae.

The collecting localities of G. peruanus   comprise central Peru, central Bolivia, and western Brazil, in the states of Rondônia and north-western Mato Grosso. By connecting the most external collecting localities of the species we obtained an approximated geographic distribution that extends from central Peru to central Bolivia and western Brazil, in the northern and central portions of Mato Grosso state ( Fig. 1 View Figure 1 ). This area pre- sents two records where G. peruanus   and G. agilis   occur in sympatry (localities 3 and 15; Fig. 1 View Figure 1 ).

In bold, the five larger values for each function.

Gracilinanus peruanus   is a small-sized marsupial ( Table 4) with short (approximately 7 mm in length), smooth, and dull reddish-brown dorsal pelage, not exposing the grey-based hairs ( Fig. 5 View Figure 5 ); pelage of rostrum short with grey-based and cream-tipped hairs, usually contrasting sharply with darker crown fur that is longer and grey-based with reddish-tipped hairs; dark circumocular mask small and poorly developed anteroposteriorly when compared with other Gracilinanus species   ( Fig. 10 View Figure 10 ); colour pelage between eyes and ears usually reddish, similar to the colour of head; cheeks self-coloured cream contrasting sharply with facial mask; mystacial vibrissae entirely black or black with white tips; three or four black genal vibrissae dorsally oriented and three genal white vibrissae ventrally oriented; white submental and interamal vibrissae present; the self-coloured cream portion of ventral pelage extends from chin to chest and forearms, and greybased hairs extend from chest to inguinal region, including hind limbs; tail slightly bicoloured, longer than combined length of head and body; fur of the base of the tail no longer than 5 mm in length; caudal scales arranged in annular pattern; each scale possesses three hairs inserted in its posterior margin, with the central hair slightly longer (two caudal scales in length); hairs on the basal portion of the tail shorter and more sparse, giving the ventral and distal portion of the tail a more hairy aspect; prehensile ventral surface of the distal part of the tail approximately 30 mm in length; ears small (14–19 mm), cream to cream–orange on the base and pale brown distally.

Gracilinanus peruanus   differs from other congeneric species by exhibiting dull reddish brown dorsal fur versus the reddish, brownish, or greyish tones in other species (see Table 10); grey-based buffy ventral fur from chest to anus, as in G. agilis   and G. marica   versus selfwhite in G. emiliae   and with grey-based hairs from throat to anus in G. aceramarcae   , G. dryas   , and G. microtarsus   ; circumocular mask restricted to the area close to the eyes, similar to G. agilis   but differing from the other species in which the masks are wider ( Fig. 10 View Figure 10 ); posterior accessory cusps in upper canines frequently present versus absent in G. aceramarcae   , G. agilis   , and G. microtarsus   ; interorbital region smooth or with angular supraorbital margins in mature adults versus weakly and distinctly beaded in G. marica   and G. emiliae   , respectively; and well-developed maxillary fenestrae, which are small or absent in G. emiliae   . A summary of the diagnostic characters of G. peruanus   in comparison with the other species of the genus is provided in Table 10. Closer comparisons between G. agilis   and G. peruanus   are warranted, as the latter was until now considered a junior synonym of the former, and both species are present in Bolivia and central–western Brazil, including two sympatric records ( Fig. 1 View Figure 1 ). In fact, G. peruanus   and G. agilis   are very similar in external and craniodental traits; however, the former exhibits dull reddish brown dorsal fur whereas the latter exhibits dorsal fur with brownish/ greyish tones ( Fig. 5 View Figure 5 ). In addition, G. peruanus   is generally smaller in size when compared with G. agilis   ( Table 4).

Craniodentally, the most distinctive character that distinguishes these species is the relative position of the anterior margin of the maxillary fenestrae, which is consistently aligned with the paracone of P 3 in G. peruanus   versus consistently aligned with the paracone of M 1 in G. agilis   ( Fig. 8 View Figure 8 ). It is important to mention, however, that in young specimens of G. peruanus   the position of the maxillary fenestrae is similar to the position found in specimens of G. agilis   .

We observed few pelage variations in examined specimens of G. peruanus   . The dorsal pelage followed the

eThe topotype of Marmosa agilis peruana   (BMNH 27.11.1.269) exhibits wide and divergent supraorbital margins, probably because of the fact that it is a subadult specimen, age class 5.

fWe found variation in this character for this species (see text and Table 11).

same pattern in all examined material, except for a few specimens that exhibited a less homogeneous pelage; however, more expressive variation was observed in the ventral pelage, with several specimens (CM 455, 463, 464, 489, 492, locality 3; Fig. 1 View Figure 1 ) exhibiting selfcoloured cream pelage in the inguinal region, and other specimens (UFMT 3816, locality 23; AMNH 209157, locality Costa Marques, Rondônia, not shown in Fig. 1 View Figure 1 ) exhibiting self-coloured cream pelage over the entire venter. In most specimens, however, self-coloured fur is restricted to the chin, throat, chest, and frontal limbs. Intraspecific variation observed in the presence of C1 accessory cusps, the size of posterolateral palatal foramen, and the morphology of the anteromedial process of the alisphenoid tympanic process are shown in Table 11.

The combination of diagnostic morphological characters mentioned in the Emended diagnosis section, together with the results of the morphometric and molecular analyses, justify the recognition of a distinct species of gracile mouse opossum. To search for available names that could be assigned to this distinct species we have examined the holotypes of nominal taxa related to G. agilis   , such as beatrix Thomas, 1910   ; buenavistae Tate, 1931; peruana Tate, 1931; blaseri Miranda-Ribeiro, 1936   ; and rondoni Miranda-Ribeiro, 1936   ( Voss et al., 2005: table 1).

Regarding the holotype of M. beatrix   (BMNH 11.4.23.24), it can be consistently associated with the genus Gracilinanus   by the presence of maxillary fenestrae, an anteromedial process of the alisphenoid tympanic process, and P2 taller than P3. Nevertheless, the taxonomic status of this nominal taxon requires further evaluation because the holotype exhibits self-coloured cream pelage covering the entire venter, and is smaller in the majority of the craniodental measurements, differing in the ventral coloration and size of typical G. agilis   ( Table 4). In addition, the multivariate analyses showed that this specimen does not group with either G. agilis   or G. peruanus   in morphometric space ( Figs 3 View Figure 3 , 4 View Figure 4 ).

Miranda-Ribeiro (1936) described two species that are currently in the synonym of G. agilis   : M. blaseri   , based on a specimen from São Bento, Goiás (MN 1250) and T. rondoni   , based on a type series from two distinct localities: Salto do Sepotuba, Mato Grosso state (MN 1270) and São João da Serra do Norte, Rondônia state (MN 1271, 1272, 1275, and 1276). The holotype of M. blaseri   can be assigned to G. agilis   based on its greyish brown dorsal coloration, absence of cusps in the C1, relative position of maxillary fenestra between M1 and M2, and a posterolateral palatal foramen larger than the palatine fenestra.

In relation to T. rondoni   , the type series is a composite. Miranda-Ribeiro (1955) designated the specimen MN 1270 from Salto do Sepotuba , Mato Grosso, as the lectotype   , and the other material, consequently, as paralectotypes (see also Langguth et al., 1997). Among the latter specimens, MN 1276 can be consistently assigned to G. peruanus   based on its dull reddish brown dorsal coloration, maxillary fenestra between P3 and M2, a posterolateral palatal foramen smaller than the palatine fenestra, and the presence of a second foramen ovale formed by a wide bony strut on the anteromedial region of the alisphenoid tympanic process. The remaining paralectotypes   do not belong to the genus Gracilinanus   nor the lectotype.

By contrast, the specimens herein identified as a distinct species of gracile mouse opossum are morphometrically and morphologically similar to the holotypes of M. a. buenavistae Tate, 1931 (BMNH 26.12.4.91) and M. a. peruana Tate, 1931 (BMNH 27.11.1.268). All of the specimens exhibit dull reddish brown dorsal pelage; posterolateral palatal foramen smaller than palatine fenestra; second foramen ovale formed by a wide bony strut on the anteromedial region of the alisphenoid tympanic process; paraoccipital process small and rounded; and incipient mastoid process. Several minor differences observed between the holotype of M. a. buenavistae and our specimens, such as the relatively larger size, the faded greyish brown dorsal pelage coloration, the presence of an incipient postorbital process, and the absence of accessory cusps in the upper canines in the former, can be related to age variation because the specimen is a mature adult female (age class 8). Other morphological traits, such as the anterior margin of the maxillary fenestrae that only slightly reaches the posterior border of P 3 in both holotypes, and the absence of accessory cusps in C 1 in the holotype of M. a. peruana, are within the scope of morphological variation observed in the specimens in central– western Brazil and the surrounding areas; however, among all the specimens examined, only the holotype and a topotype of M. a. peruana (BMNH 27.11.1.268– 269) exhibited developed circumocular masks. In the absence of other specimens from Peru and nearby vicinities, we provisionally treat this difference as a geographical variation in this trait.

Based on these results, we recognize M. a. buenavistae Tate, 1931 and M. a. peruana Tate, 1931 as synonyms that can be assigned to a valid species distinct from G. agilis ( Burmeister, 1854)   . Because both available names were described in the same work by the same author ( Tate, 1931) and in the same hierarchical category (as subspecies of Marmosa agilis   ), the priority between these two names cannot be objectively determined. So, as first revisers of this issue, and according to article 24.2 of the International Code of Zoological Nomenclature ( ICZN, 1999), we establish M. a. peruana Tate, 1931 as the name for the species recognized in this report, with M. a. buenavistae Tate, 1931 treated as its junior synonym. We use the spelling of this taxon as G. peruanus   following the agreement in gender according to article 31.2 of the ICZN (1999).

Among specimens of G. peruanus   with available field information, two were caught in Sherman live traps placed on the ground and 11 were caught in pitfall traps. Although pitfall traps appear to be more effective in collecting the species, it is not possible to confirm this because we have no information about the trapping efforts. Considering the distinct ecoregions (sensu Olson et al., 2001) within the geographic range of G. peruanus   , 12 of our records are located in the Chiquitano dry forests (including the holotype of M. a. buenavistae, locality 67; Fig. 1 View Figure 1 ), followed by 11 records in the Cerrado, two records in the Madeira-Tapajós moist forests, one record in the Mato Grosso seasonal forests, and one record in the Ucayali moist forests (the holotype of M. a. peruana, locality 71, Fig. 1 View Figure 1 ). For most collecting localities in the Cerrado and for a few localities in the Chiquitano dry forests, the specimens are associated with gallery forests such as those shown in Figure 11 View Figure 11 . In the Cerrado, 20 individuals were collected in gallery and deciduous forests, and seven individuals were collected in both disturbed forests and Cerrado sensu stricto. This pattern leads us to consider that this species is associated with forested formations, and may use the gallery forests to enter savanna-like formations in the Brazilian Cerrado. Figure 3. Scatter plot of the principal component analysis (PCA) of 24 log-transformed craniodental measurements of Gracilinanus agilis, Gracilinanus peruanus, and other nominal taxa related to these species. Figure 4. Scatter plot of canonical scores (DA) for discriminant functions 1 and 2 based on craniodental measurements of Gracilinanus agilis, Gracilinanus peruanus, and other nominal taxa related to these species. 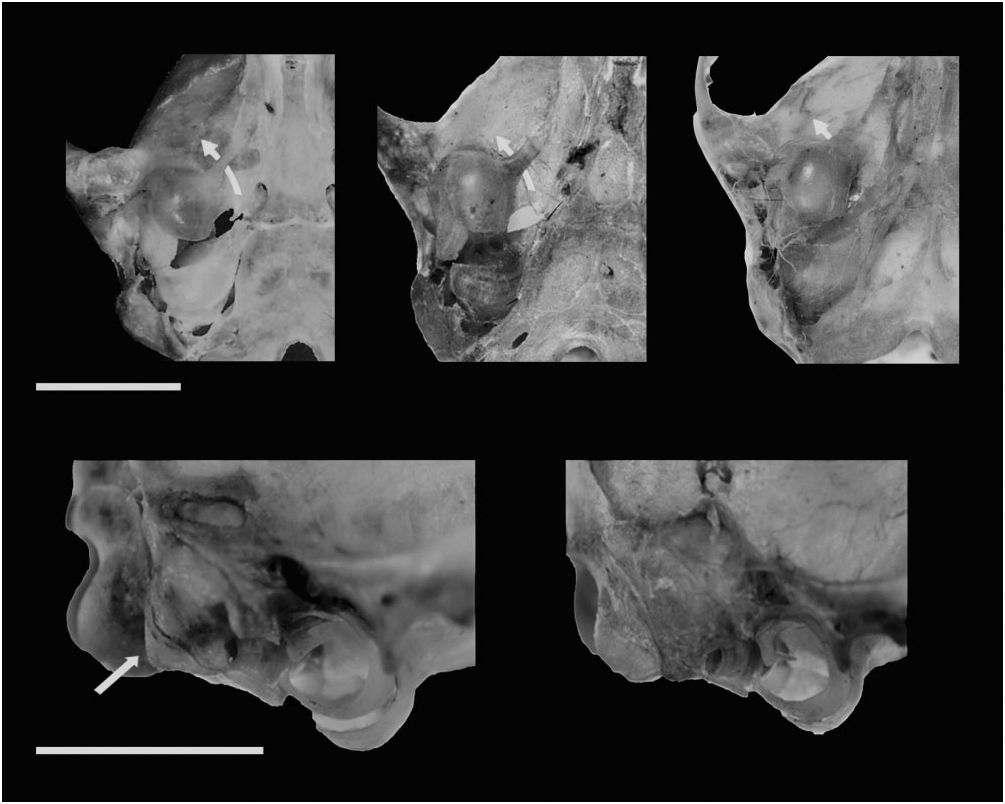 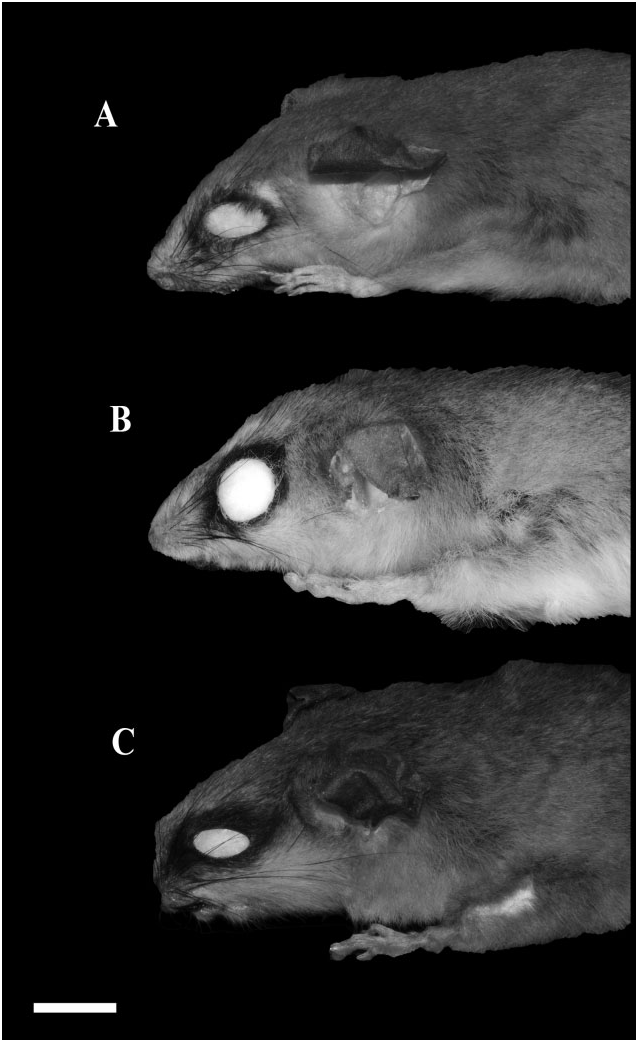 Figure 11. Gallery forest where Gracilinanus peruanus and Gracilinanus agilis were found in sympatry (locality 3 in Fig. 1). Note the black arrow showing the deforested area near the trapping site. Photo courtesy of Vitor Azarias.