Distribution. Cuckoo ray ( L. naevus  ) is relatively widespread in the Northeast Atlantic, occurring from Morocco to Norway, including the Mediterranean Sea ( Stehmann & Bürkel, 1984; Serena et al., 2010). Juveniles are found further offshore than the young of Raja  spp. ( Ellis et al., 2005). Records submitted to the Great Eggcase Hunt were collected predominantly from southwest England, although verified reports have been made along the southern and western coasts of England and Wales, with scattered reports from Scotland and the Northern Isles.

Material examined. Ninety-four specimens were examined overall, including those recorded from the Great Eggcase Hunt (n = 52) and trawl surveys (n = 39), with three museum specimens also examined ( BMNH 1927.1.31.1–3). Specimens from trawl surveys were captured primarily by beam trawl in the western English Channel and Celtic Sea, over the area from 49.1– 50.9°N and 3.9  –6.7°W, and in waters 84–118 m deep.

Description. The eggcase of L. naevus  is small (eggcase length 50.0 ± 13.2 mm; 31.6–65.2 mm) but has extended horns ( Figure 2View FIGURE 2 c), and the range of total eggcase length is 156.8–197.9 mm. The three historical specimens examined closely matched the size range recorded in contemporary samples. Both dorsal and ventral surfaces are convex, with obvious longitudinal striations on both surfaces. The eggcase is without keels and the dorsal and ventral surfaces meet seamlessly at the margin. The anterior apron is pronounced and convex whereas the posterior apron is sometimes lacking. The anterior horns are long (on average representing 48% of the entire eggcase length) and in complete specimens curve inwards and often overlap. The posterior horns are shorter than the capsule length and often terminate in hooks.

Remarks. As the anterior horns are so long and delicate, they are often broken in strandline specimens, which can sometimes cause confusion with Raja montagui Fowler, 1910  when attempting identification. However, as the capsule is biconvex and has a more rounded appearance, it is still distinct from the other species found in European inshore waters. The mean eggcase width in the present study was within the range of previous reports ( Table 1), but mean eggcase length was slightly shorter than recorded in earlier studies.

No comparative material for the related sandy ray Leucoraja circularis (Couch, 1838)  and shagreen ray Leucoraja fullonica (Linnaeus, 1758)  were available during this study. Some of the earlier descriptions of the eggcases of what was purported to be L. circularis  should be treated with care, as cuckoo ray was sometimes referred to as Raia circularis  in early accounts, as noted by Clark (1922). Both L. circularis  and L. fullonica  have eggcases of similar shape to L. naevus  , with preliminary descriptions given by Desbrosses (1931). The eggcases of these two species are both larger than the cuckoo ray, ranging from 83–92 mm long and 45–53 mm wide in L. circularis  and 75–89 mm long and 45–67 mm wide in L. fullonica  ( Desbrosses, 1931; Wheeler, 1969; Table 1). 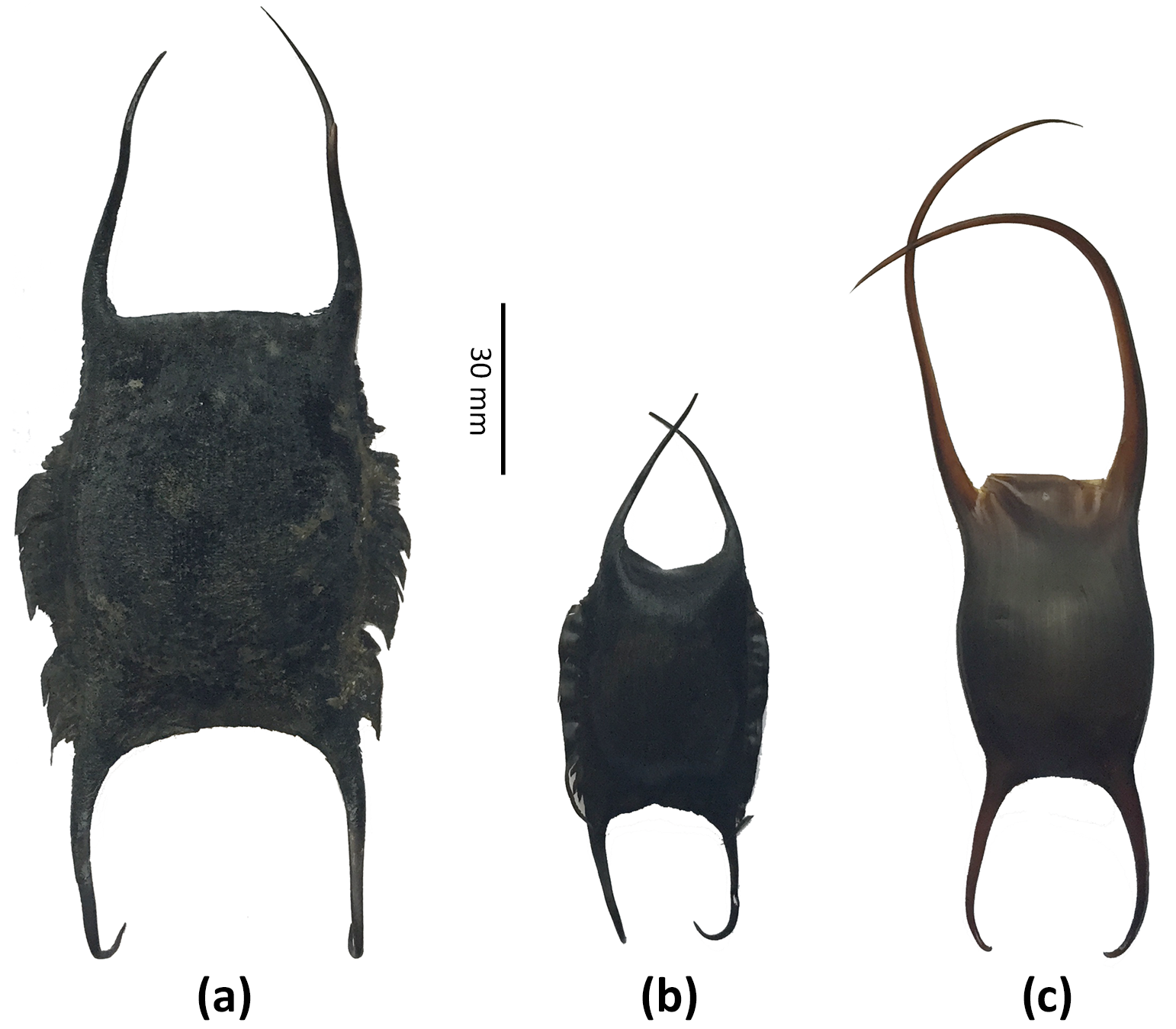