Distribution. Black-mouth catshark ( G. melastomus  ) is distributed widely on the outer continental shelf and upper slope in the Northeast Atlantic, from Norway to Senegal, including the Mediterranean Sea ( Stehmann & Bürkel, 1984). Despite being relatively widespread, this is a deeper-water species and so eggcases are rarely washed ashore and reported to the Great Eggcase Hunt. Only two verified specimens have been submitted to the Great Eggcase Hunt at the time of writing, one from North Uist (Outer Hebrides) and the other from Rossnowlagh, Donegal ( Ireland).

Material examined. Seven samples were examined in total, of which one from North Uist was recorded by the Great Eggcase Hunt. The remaining six specimens were from museum collections ( BMNH 1934.8.8.3a, BMNH 1934.8.8.4a, BMNH 1928.9.18.13–16), with two recorded from southwest Ireland and the remainder of unknown provenance.

Description. The eggcase of G. melastomus  ( Figure 8View FIGURE 8 a; Table 2) is similar in shape and appearance to S. canicula  however it lacks the curly tendrils of Scyliorhinus  . The mean eggcase length is 58.9 ± 11.3 mm (33.6–65.0 mm) and eggcase width is 20.4 ± 1.8 mm (17.1–23.0 mm). It is a small and neatly-formed eggcase with longitudinal striations visible on the capsule surface. The capsule is flattened towards the anterior neck and biconvex towards the wider posterior end. Keels are absent and in their place are small ridges that join the dorsal and ventral sides together. In place of tendrils, this eggcase has short anterior horns which form small hooks that curve inwards. The posterior horns are also short and hooked, curving in to meet each other.

Without horns/ With horns/

canicula  23 55 Bor (1998; Fig. 7View FIGURE 7) Distribution. Small-spotted catshark ( S. canicula  ) is widespread in the shelf seas of the Northeast Atlantic, from Norway to western Africa, including the Mediterranean Sea ( Stehmann & Bürkel, 1984). It is one of the most abundant sharks around the British Isles. The eggcases are commonly washed ashore around much of the coastline, observed in trawl surveys and encountered in situ by divers and snorkelers.

Material examined. Fifty-two eggcases were examined in total. The majority (n = 50) were recorded by the Great Eggcase Hunt, with the remainder provided by public aquaria (n = 2).

Description. The eggcase of S. canicula  ( Figure 8View FIGURE 8 b; Table 2) is of a similar shape to S. stellaris  , however the elongated capsule is much smaller and less robust. The eggcase is 40.1 ± 11.8 mm (31.0–74.0 mm) in length and has a greatest width of 21.8 ± 2.3 mm (17.8–31.0 mm). The eggcase is biconvex towards the wider posterior end and flattened towards the anterior end. As the capsule flattens the width narrows to form a collar, before widening again slightly at the anterior end. Keels are absent, but narrow margins join the dorsal and ventral sides. The anterior of the eggcase is straight, while the posterior is concave, and aprons are absent. Fine, elongated and curled tendrils extend from the terminus of the marginal walls on each corner of the capsule. The colour is not a reliable identification feature as it is highly variable, ranging from pale amber to dark brown or black.

Remarks. The tendrils are used to anchor the eggcase to a variety of structures, including macroalgae in the shallow sublittoral, and various sessile invertebrates (sponges, hydroids, soft corals, bryozoans, ascidians) are used further offshore ( Ellis & Shackley, 1997). The eggcases of S. canicula  can often be found in large masses where the tendrils have knotted together, forming large ‘nests’. The capsule of the eggcase is similar in size to that of G. melastomus  and so could cause confusion if the tendrils have been broken. Mellinger (1983) noted that individual, captive-held specimens each laid eggcases distinct in terms of size, shape and colouration. 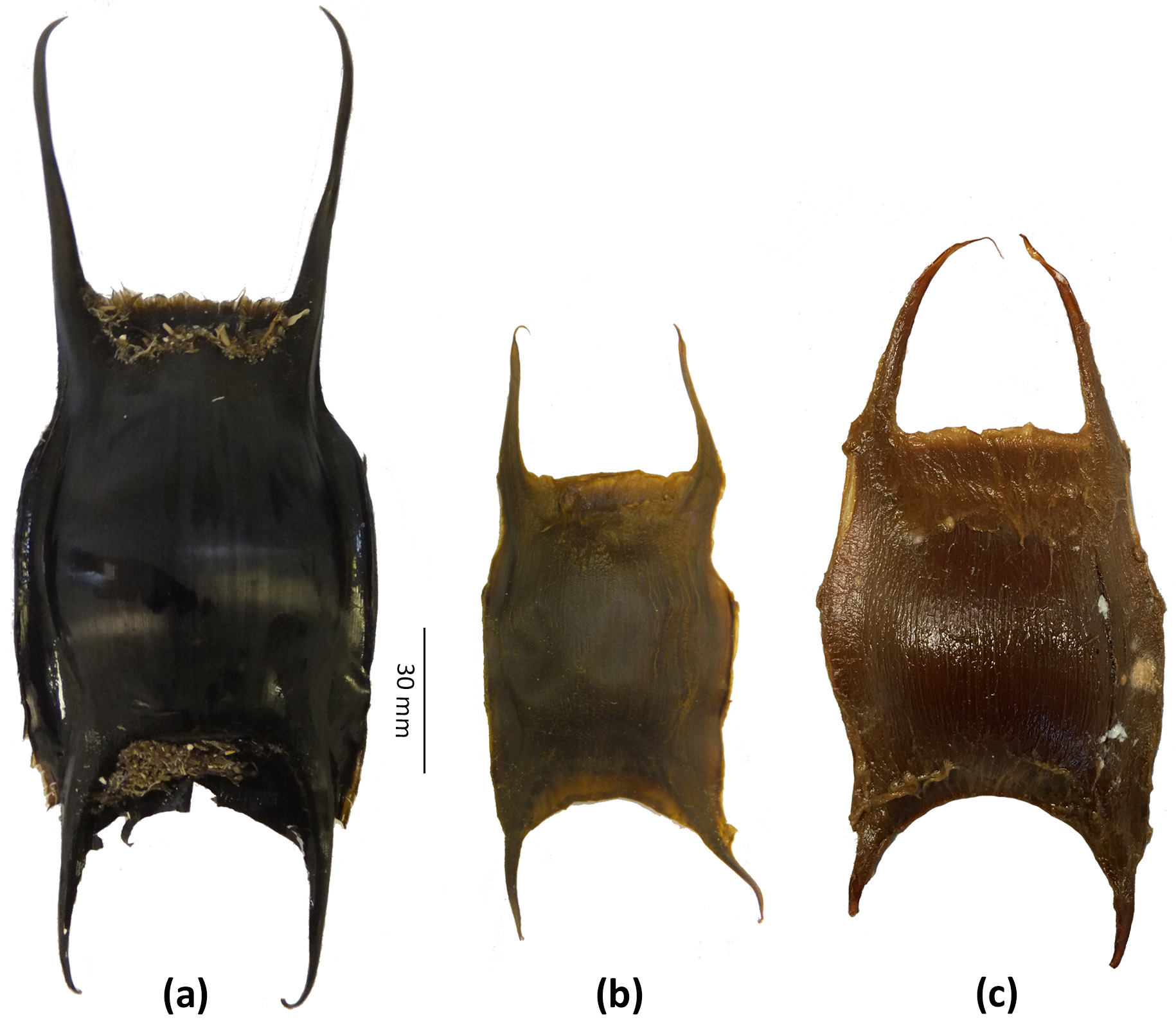