Distribution. Nursehound ( S. stellaris  ) is present in the Northeast Atlantic from southern Scandinavia to Morocco, including the Mediterranean Sea ( Stehmann & Bürkel, 1984). Around the British Isles, it is most abundant in shallow waters close to rocky shores in the Irish Sea and English Channel ( Ellis et al., 2005). The eggcases reported to the Great Eggcase Hunt were predominantly from along the southern and western coasts of England and Wales.

Description. The eggcase of S. stellaris  ( Figure 8View FIGURE 8 c; Table 2) is moderately large and elongated, typically 106.4 ± 7.2 mm (89.0– 125.1 mm) in length and with a greatest eggcase width of 34.1 ± 0.9 mm (32.7–36.7 mm). The capsule is flattened along the neck of the eggcase towards the anterior end, and both dorsal and ventral surfaces are convex towards the posterior end. Instead of keels, the eggcase has well developed marginal walls bearing pronounced latitudinal grooves. The anterior of the eggcase is broad, straight and has no apron. The posterior end is concave with a narrow apron. Thick, curled tendrils extend from the terminus of the marginal walls on each corner of the capsule with grooves extending the length of the tendrils. The capsule, which has irregular longitudinal striations, varies in colour from light amber to dark brown, but occasionally even green or black, or displaying pigmentation.

Remarks. This is the largest eggcase of an oviparous shark found in the Northeast Atlantic. The length and width of historic samples (n = 8) closely matched the size range of contemporary samples measured during this study. The curled tendrils extending from the capsule are used to anchor the eggcase to a substrate while the embryo develops over a 9–11 month incubation period ( Orton, 1926). The eggcases are deposited frequently on macroalgae in shallow water, and sessile invertebrates in slightly deeper water, including pink sea fan Eunicella verrucosa (Pallas, 1766)  . The senior author has also observed the eggcases of this species in shallow waters off Wembury Point (Devon, England), mostly attached to the algae Cystoseira tamariscifolia (Hudson) Papenfuss, 1950  . 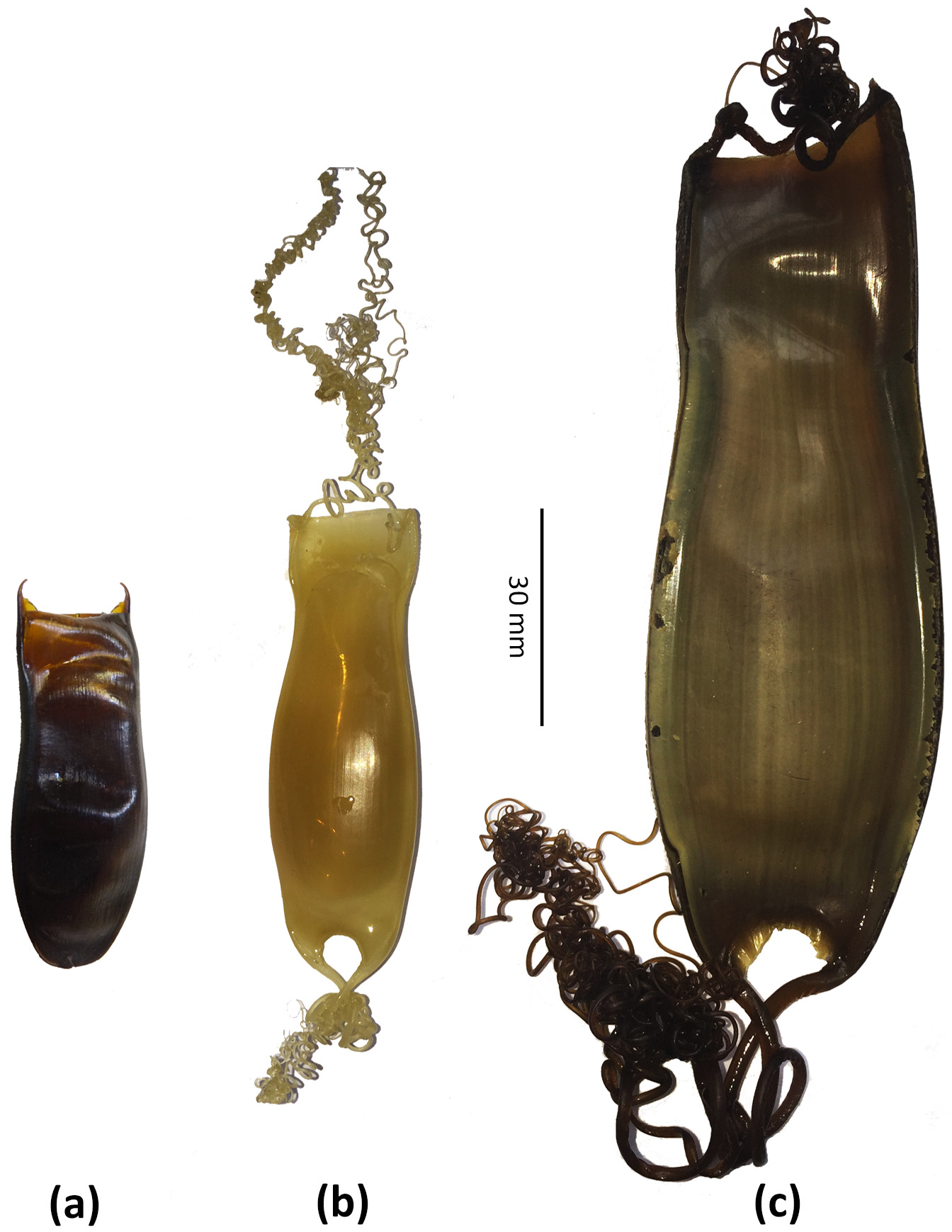