First antenna filiform, about twice as long as eye plus peduncle ( Fig. 1 View FIGURE 1 A). Basal antennomeres of second antenna fused proximally at an angle of about 50 degrees from the body axis. Ventral margin with paired linear, ventral processes (VP, Fig. 1 View FIGURE 1 A) clothed with small spines, spaced 1–2 times their length. Overall dimensions of these processes about 4 times longer than deep with lateral edge a little shorter than medial edge. Distal margin slightly concave, lateral corner produced and medial corner rounded but only slightly enlarged. Posterior surface of fused proximal antennomeres with a small conical mound (CM, Fig 1 View FIGURE 1 B) slightly medial of the lateral corner of the frontal process. Medial process (MP, Fig 1 View FIGURE 1 A) between ventral processes broad and triangular with a bifurcated apex. Anterior surface of proximal antennomeres with a basal elevated area on each side and terminating in a free, conical anterior process (AP, Figs 1 View FIGURE 1 A,F) subequal in length to the medial process and about three times longer than basal width. Distal antennomere of second antenna curved medially, about 1.5 to 2 times the length of the proximal antennomere. Labrum lacking a spine.

Thoracic segments with minor lateral lobes, all equal in size and proportions. Eleven pairs of thoracopods, variable in size with first two noticeably reduced in size but not in arrangement of its parts. Fifth thoracopod ( Fig. 2 View FIGURE 2 ) with endite 1 + 2 and 3 evenly curved, the former about three times the size of the latter. Endite 1 anterior seta about as long as adjacent posterior setae (shown enlarged in Fig. 2 View FIGURE 2 ) and with a double pectin of strong setules on apical half. Endite 2 anterior seta very short, about same length as base of anterior seta 1. Its spine even shorter and both weakly setose apically. Endite 3 anterior seta about four times length of anterior setae 2; both it and its subequal spine weakly setose apically. Endites 1 to 3 with posterior setae long and thin, clothed with numerous short setules and numbering about 50 on endite 1 + 2 and 16 on endite 3. Endites 4 to 6 asymmetrical (i.e. distal edge shorter than proximal edge) and with 2 anterior + 3 posterior setae, 2 + 2 and 1 + 2 respectively. Anterior setae of unequal lengths, but shorter and stouter than posterior setae and with a double pectin of stout setules apically. Posterior setae with sparse setules. Endites clothed basally with small spines generally grouped in 3–5 s. Endopodite broadly rounded and bearing about 37 posterior setae, all based with a coronet of numerous (> 10) small spines. The first 7 or 8 of these setae (essentially those on the medial edge of the thoracopod) stouter and with a one-sided pectin on the distal half of setae, whereas the remaining setae thinner and closely feathered with setules. Exopodite elongate oval and bearing about 38 posterior setae similar to most on the endopodite. Epipodite oval shaped and praepipodite elongated oval shaped, both unadorned.

Gonopods ( Figs 1 View FIGURE 1 C,G) paired, basal parts fused together and about twice the diameter of tubular free apical part. Basal part with a sharp spine apically and apical tube with a digitiform process subapically (DP, Fig. 1 View FIGURE 1 C). Both processes subequal, unhooked and pointing anteriorly. No specimens with gonopod completely everted, but a partly everted one of a paratype ( Fig. 1 View FIGURE 1 D) with complex expansions with medial row of spines.

Abdominal segments increasing in length and narrowing posteriorly from 1 to 6, particularly 5 and 6 ( Fig. 1 View FIGURE 1 E), so that last segment about twice length of first. Cercopods fringed with long setae on lateral and medial edges; length subequal to 6 th abdominal segment.

Etymology. The specific name refers to its habitat of markedly acid waters.

Comments. Limited information on this species has been given in a key in Timms (2004) where it was referred to as species f. This publication specifically states “for nomenclature purposes information given here on the new species of Parartemia   do not constitute taxonomic descriptions. Characteristics given in the key are no more than a guide to the identity of the organisms.” This species is also referred to as species f in a regional ecology ( Timms, 2009 c).

Variability. There is little difference in the morphology of P. acidiphila   between and within sites in South Australia and Western Australia. The medial process can be tightly fitted between the ventral processes or well spaced with the divided apex being well expressed ( Fig. 1 View FIGURE 1 F) or just visible. The lateral lobe on the ventral transverse process is variously developed and its spination varies from almost smooth to dense. Many populations, but not all, in Western Australia have weakly lyrate second antennal distal antennomeres ( Fig. View FIGURE 1

1 F). The female 11 th thoracic segment has variable surface structure so that the two raised areas on each side vary in size from indistinct to distinct mounds. It seems this character may be dependent on age, as its weak development was seen in younger females.

Generally adult males are 11–14 mm in length and adult females 7 –9 mm. Some specimens (e.g. those from Truslove Nature Reserve) are much larger than the type specimens, measuring 20 mm in males and 11 mm in females.

Differential diagnosis. The most distinctive male feature is the second antennal medial process which is triangular and with a bifurcated apex; a unique morphology in Parartemia   . It shares with only a few species, including P. triquestra   n. sp. (see later), a small conical mound beneath the lateral edge of the ventral processes. The female thoracic segments lack dorsal and dorsolateral projections (cf. P. s e r v e n t y i, P.

longicaudata Linder, 1941   ), nor are there narrow sclerotised rings on later thoracic segments (cf. P. zietziana   ). The posterior thoracic segments are fairly uniform in serial structures, with the 11 th most distinct with two minor protuberances laterally. The brood pouch is double (and hence different from those species with single brood chambers (cf. P. cylindrifera   , P. minuta   )) and lacks marked posterior outgrowths (as on P. zietziana   , P. longicaudata   , P. informis   Linder, 1941). Most Parartemia   species have a reduced or absent 11 th thoracopod, but of the described species only P. e x t r a c t a Linder, 1941 and P. z i e t z i a n a also have it reduced to a stub bearing few setae; it is easily distinguished from both of these species by its simple brood chamber (cf. large lobes in both other species) and its 10 th and 11 th thoracic segments being neither contracted ( P. zietziana   ) or expanded ( P. extracta   ). Its eggs are not distinct microscopically (but SEM studies have not been made). 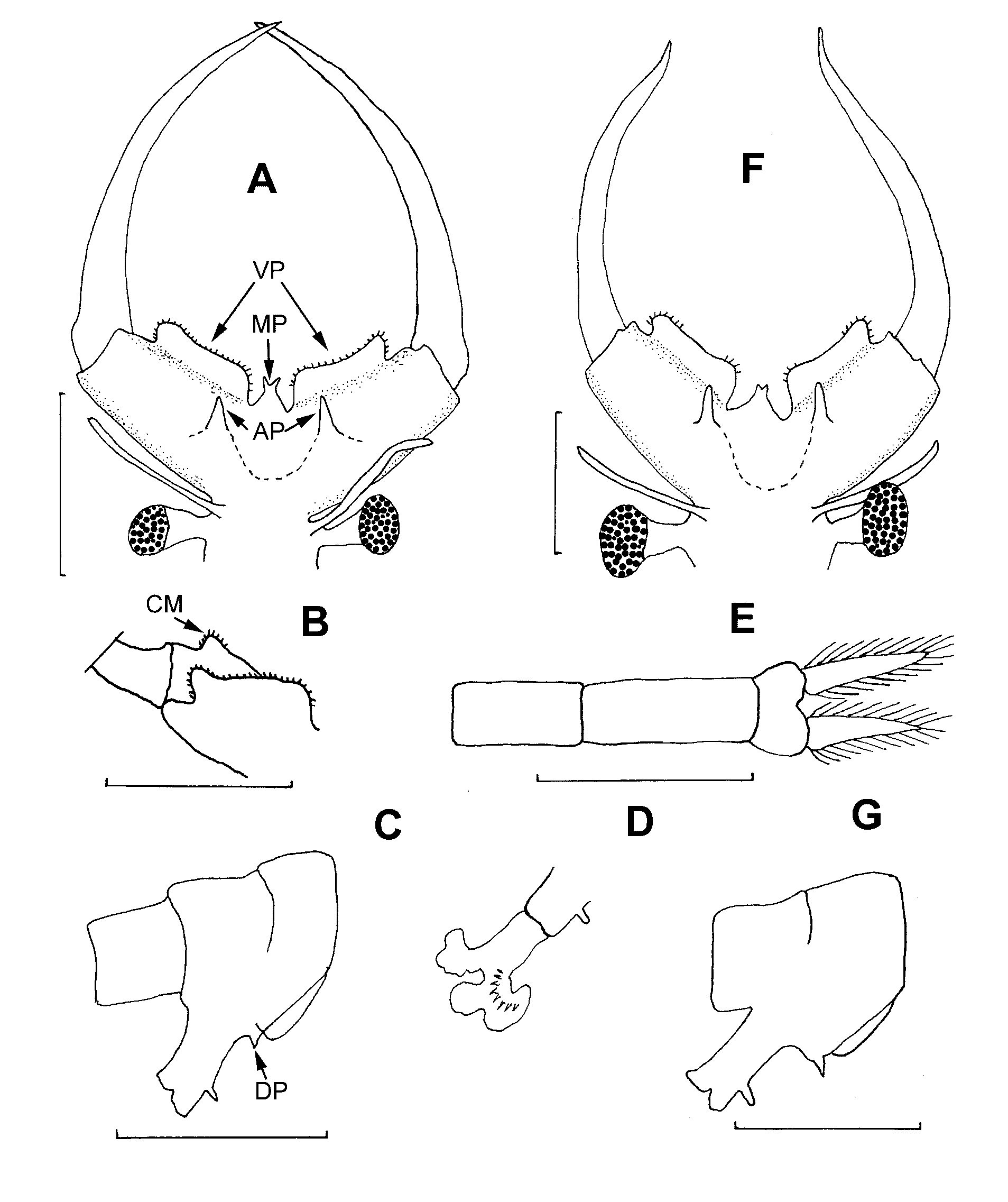 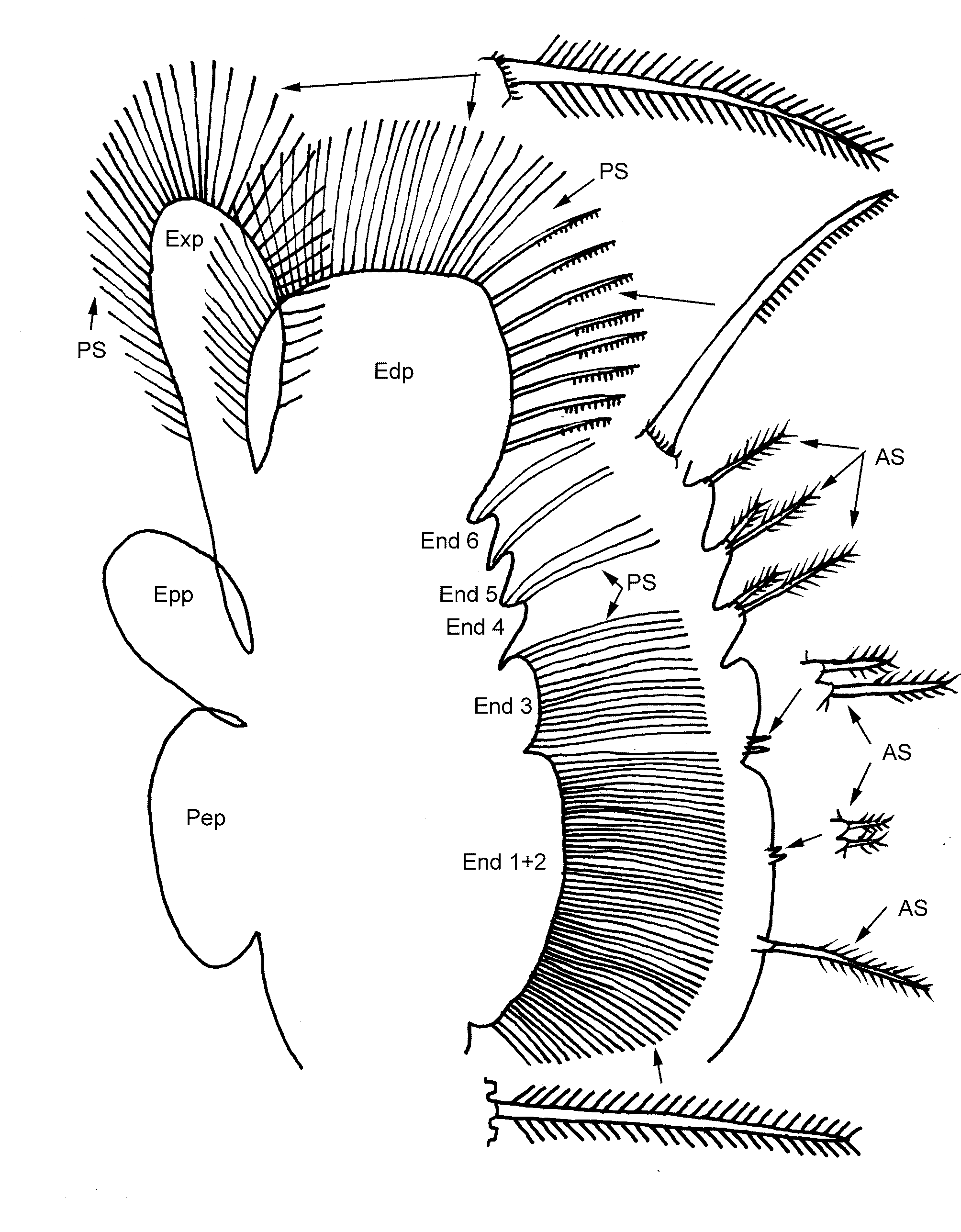 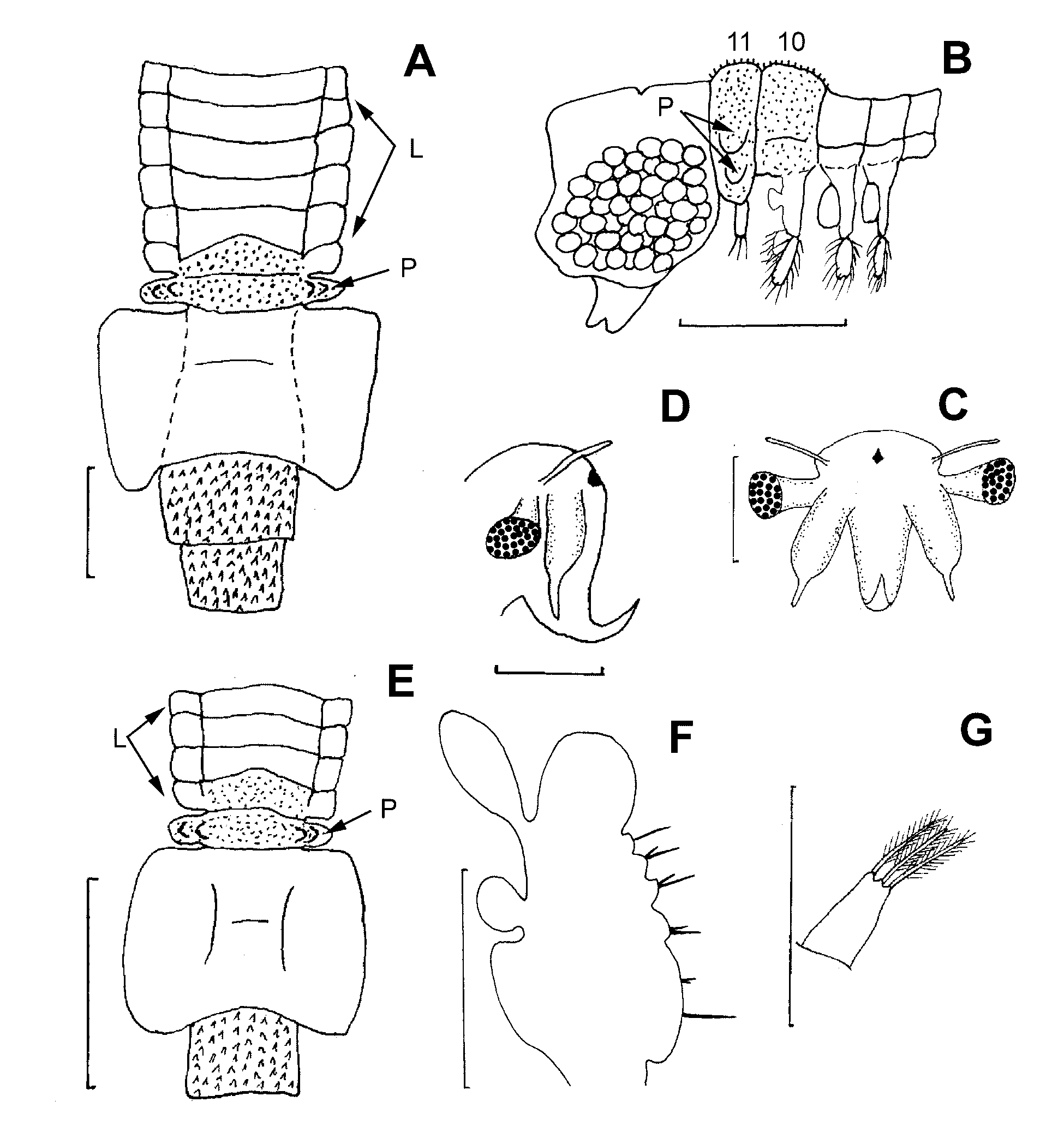