Remarks. The state of preservation prevents the proper evaluation of some characters, such as the alignment of the first pairs of notopodia and the position of neuropodial papillae in relation to the mid-ventral stripe in the region with neuropodia only.

Recently, Londoño-Mesa (2009) resurrected this taxon as a species of Terebella . However, the specimen Londoño-Mesa described and illustrated (his Figs. 18 D–J) as the holotype is not the same specimen that was sent to us, although the catalog number quoted by Londoño-Mesa (2009) is the same as the specimen we examined ( MCZ 846). We are at a loss to explain this discrepancy. Londoño-Mesa’s specimen is 210 mm long with 140 segments, it does not have lobes on anterior segments, it has 27 pairs of notopodia and distally serrated notochaetae. Ehlers stated that his specimen was 31 mm long for 53 segments, had 18 pairs of notopodia, and had lobes on anterior segments (clearly illustrated in Ehlers, 1887, Taf. 52, Fig. 1 View FIGURE 1 , included here as Fig. 9 View FIGURE 9 A).

Although the specimen sent to us as the holotype of E. turgidula is in poor condition compared to the drawing provided by Ehlers, and is no longer complete and with the body severely damaged in places, we have no doubt we are dealing with the same specimen (see Fig. 9 View FIGURE 9 A–G).

The specimen Londoño-Mesa (2009) examined and illustrated definitely belongs to Terebella , as it does not present lobes on anterior segments and has a large number of pairs of notopodia (27 pairs, against 17 as in most, if not all, species of Eupolymnia ) bearing distally serrated notochaetae.

The question of the validity of the taxon E. turgidula is complicated. Schmarda (1861) described E. crassicornis as having 25 pairs of notopodia and uncini with a single row of three secondary teeth. Augener (1925) based the synonymization of E. turgidula with E. crassicornis on the similarity between the uncini of both species and his belief that E. crassicornis should have only 17 pairs of notopodia despite Schmarda’s statement to the contrary. In addition to the problem concerning the numbers of pairs of notopodia present in both species, the holotype of E. turgidula has uncini with two rows of secondary teeth and, although the second row is difficult to discern, depending on the position of the uncini on the slide, the first row clearly has only two teeth (see Fig. 10 View FIGURE 10 C–F). Moreover, the general morphology of the uncini of these two taxa, which Augener considered very similar to each other, is considerably different in our opinion, especially considering the shape of the dorsal button, prow, base, and heel (compare Schmarda’s illustration provided by Londoño-Mesa [2009: 30, Fig. 7 View FIGURE 7 C] with our Fig. 10 View FIGURE 10 C–E).

Londoño-Mesa (2009) listed three species of Eupolymnia for the Caribbean: E. crassicornis , E. magnifica ( Webster, 1884) , and E. rullieri Londoño-Mesa, 2009 . Eupolymnia rullieri is clearly a separate taxon from E. turgidula , differing mostly in the position of the genital papillae and in the uncinial dental formula.

We consider that E. turgidula is very likely a junior synonym of E. magnifica , instead of E. crassicornis . However, we prefer to keep E. turgidula as a valid taxon until more detailed studies on these taxa are carried out. The holotype of E. crassicornis , described as dried by Augener (1925), now appears to be missing (pers. com., S. Szeiler, Naturhistorisches Museum, Wien) and a neotype would have to be erected to stabilize the species and resolve the question of synonymy. However, considering all the problems to characterize this taxon discussed above, it is not possible to erect a neotype at this stage and therefore this taxon should be considered as undeterminable, if the holotype is not found. 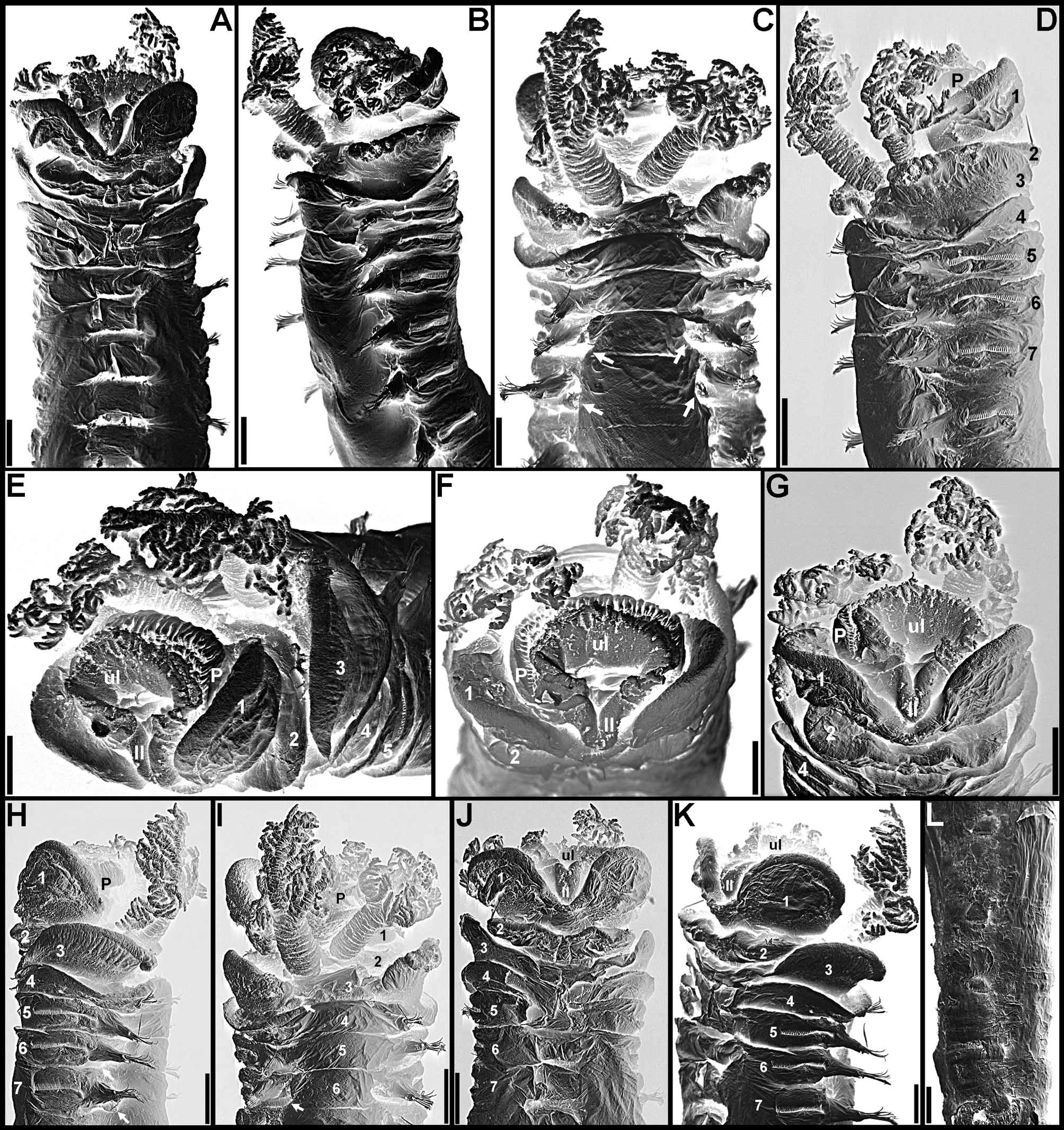