Etymology. The species is named after the diagnostic character of the setation of the bases of pereopods 1–3.

Cheliped ( Fig. 7 View FIGURE 7 A) basis attached via triangular sclerite, distal part larger than proximal part, shorter than carpus, with one seta near carpus. Merus half as long as carpus, with one ventral seta. Carpus as long as propodus inclusive fixed finger, with two simple ventromedial setae, one small stout ventrodistal seta, and one short dorsodistal seta. Propodus (including fixed finger) more than twice as long as wide, with one seta at dactylus insertion. Fixed finger with two ventral and three inner setae, inner margin smooth. Dactylus naked.

Pereopod 1 ( Fig. 7 View FIGURE 7 B) coxa without projections, with single seta. Basis six times as long as wide, with several setules on dorsal margin, with one dorsoproximal setulose seta. Ischium with one ventral seta. Merus marginally shorter than carpus, with one simple distal setae on each margin. Carpus sub-rectangular, longer than half of propodus, with two dorsodistal and two ventrodistal setae. Propodus less than twice as long as dactylus and unguis combined, with three dorso-subdistal setae, apical spine and one ventrodistal seta. Dactylus less than half as long as unguis, with single seta. Unguis with spatulated apex

Remarks. The new species key out to the ‘ mixtus’ group ( Hansen 1913) using the key of Błażewicz-Paszkowycz (2007: 25) but differs by the pereopods 4 and 5 merus prickly tubercles being smaller (smaller than half of carpus) and the combined length of dactylus and unguis clearly shorter than propodus. The new species differ from T. mimosis   by lacking the long dorsal setae on the first pereonite.

The new species is unique in having multiple small short setae on the pereopod 1 and 2 bases. Multiple small setae on the basis of the first pereopods are also recorded from T. aequiremis   , and apparently only for pereopod 2 and; these are larger than in T. pereosetulosa   which also differ in the number of uropod articles as well as several other characters.

The labrum spines is a somewhat unusual character but have been recorded from Paratyphlotanais alveolus Błażewicz-Paszkowycz (2007)   but the uropodal endopod distal article of T. pereosetulosa   is not shorter than the proximal and thus cannot be place in that genus.

The dissimilar structure of the pleopods is another interesting feature that has not been examined in sufficient detail among the Tanaidacea   . Dissimilarity between pleopods have been observed in other tanaidaceanss to a greater ( Sphaeromapseudes   - see Larsen (2011 b) or lesser extent ( Zeuxo   - Larsen et al. research in progress); also Błażewicz-Paszkowycz (2007) illustrates and even diagnoses dissimilar pleopods in Meromonakantha natatoris   although not in the same specimen. However, most tanaidacean species are described as with “all pleopods similar” and it is doubtful if these appendages have been studied in sufficient detail in previous descriptions (even those by this author). 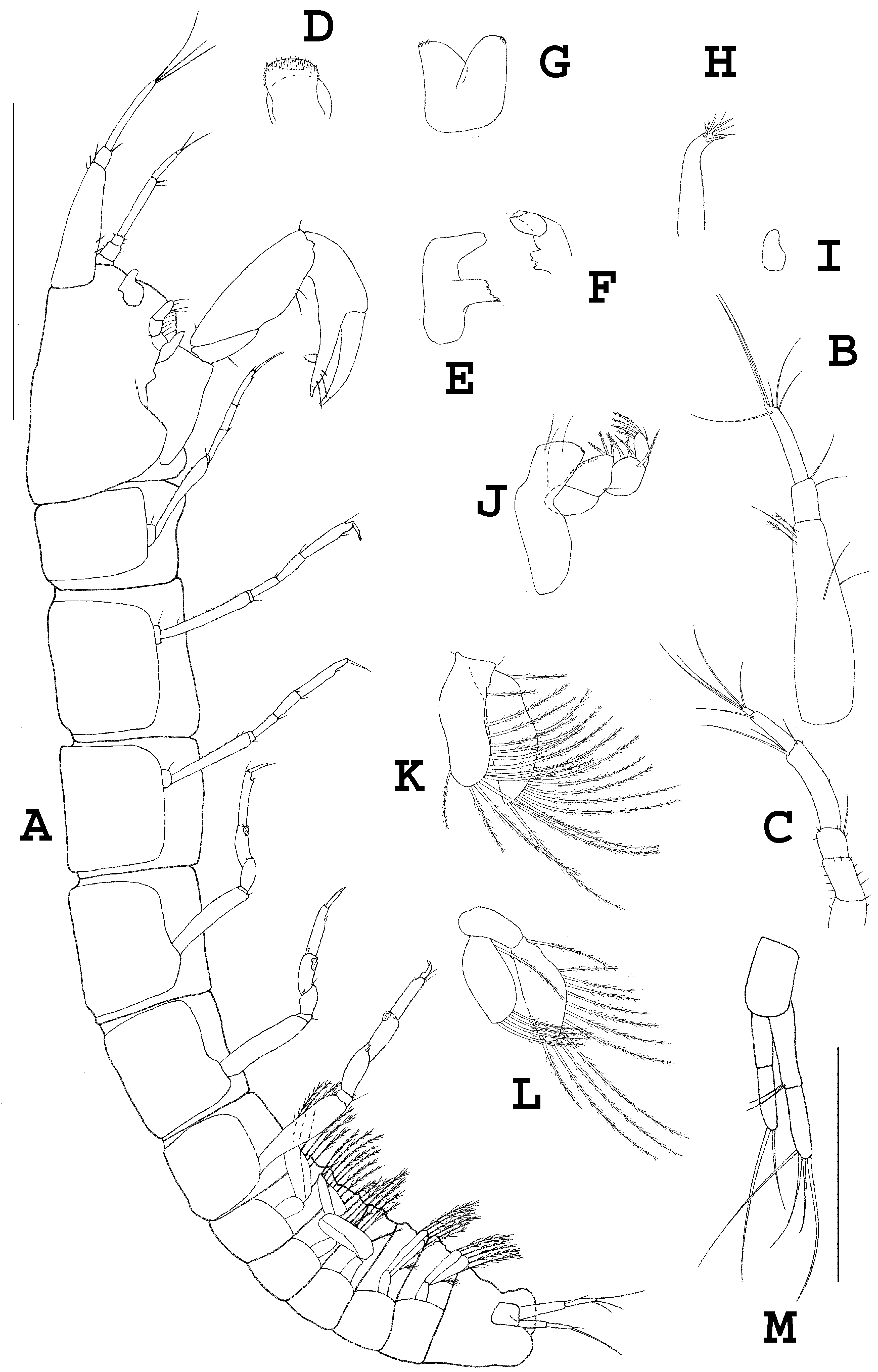 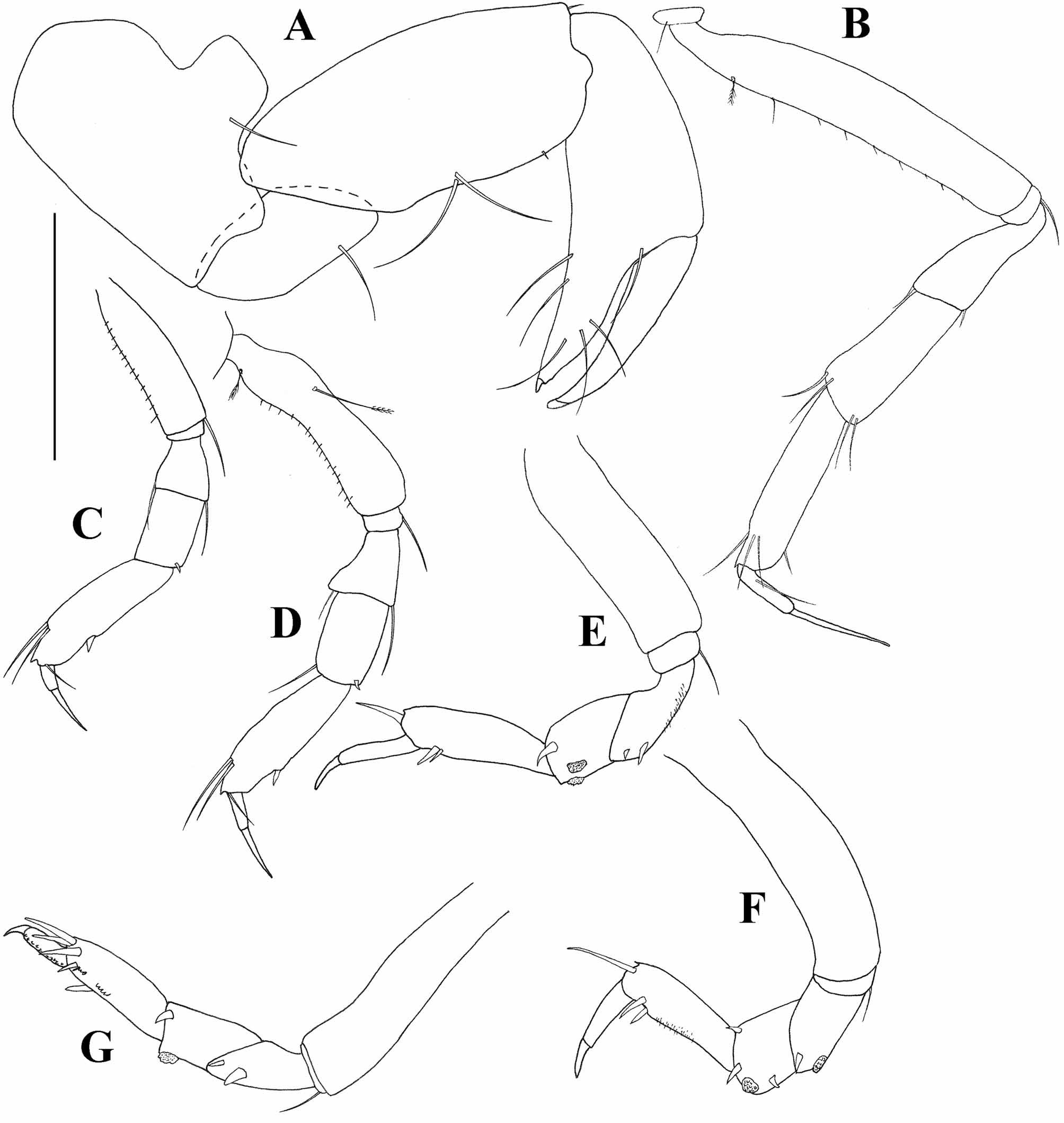