Etymology: —The specific epithet “pseudodelicata” refers to the vegetative similarity between the new species and D. delicata . The new species was not flowering when first collected and was believed to be D. delicata . However, significant morphological differences found after checking its inflorescences revealed it to be a new species, which we decided to call “false” D. delicata .

Distribution and Habitat: —The new species occurs as a saxicolous heliophyte on a rocky basaltic escarpment facing north, near the Toropi-mirim stream. Only one population of the species was located in the municipality of Jari, state of Rio Grande do Sul, southern Brazil. Several similar environments occur in the region, and so it is possible that there are further populations of the species. Some similar environments were found within a ca. 4 km radius around the known population of D. pseudodelicata , but only populations of D. selloa (on a rocky vertical escarpment) and D. dusenii Smith (1932: 6) (on a hillside with shallow litholic soil) were found. Two individuals observed in the population of D. pseudodelicata were probably natural hybrids between D. pseudodelicata and D. dusenii , and probable hybrids of D. selloa and D. pseudodelicata were observed in vicinity to D. selloa .

The vegetational physiognomy in which the xerophytic relict is inserted, and where the new species occurs, is a transitional region between the Pampa grasslands and the seasonal forest of the Atlantic Forest domain. This transition is located at the edge of the Southern Brazilian Plateau, in the central region of the state of Rio Grande do Sul, in the hydrographic basin of the Toropi-mirim stream, a tributary of the Toropi river. Taxonomic studies of plants in this region have revealed a significant number of endemic and rare ( Marchiori et al. 2014; Büneker & Witeck-Neto 2016) or new species over the last two decades ( Menezes 2009; Soares & Longhi 2011; Büneker et al. 2013, 2015a, 2017, 2018; Deble & Alvez 2013; Coelho & Miotto 2017; Silveira et al. 2019; Figueira & Schindler 2021).

Observations and discussion:— The new species is morphologically similar to D. delicata , mainly due to its vegetative aspect ( Figs. 1A–B View FIGURE 1 , and 2A–E, K–O View FIGURE 2 ), which is unique among the species of the D. selloa complex, as both species have leaf blades that resemble chilopods of the genus Scolopendra Linnaeus (1758: 637) . The leaf blades are succulent, arched, reflexed, both faces are convex, and also possess dense conspicuous trichomes ( Fig. 2E and O View FIGURE 2 ) and densely spiny margins with highly developed, although flexible and not pungent, spines ( Fig. 2A–D, K–N View FIGURE 2 ). These vegetative characteristics have made D. delicata highly appreciated and widespread among gardeners and collectors of ornamental succulent plants ( Sachs 2011) and bestow D. pseudodelicata with the same potential.

Dyckia delicata possesses a series of singularities among the species of the D. selloa complex with regards to the morphology of its inflorescences and flowers. The sparsely branched architecture of the inflorescence, being simple or compound, once-branched, with branches only at the base of the fertile portion (when compound), robust branches, relatively large flowers with spiraled stigmatic lobes in pre-anthesis, and patent ovules positioned in relation to the longitudinal axis of the ovary, are features that are absent from most of the remaining species of the D. selloa complex but widely observed among other Dyckia species. Despite the great morphological similarity between D. delicata and D. pseudodelicata , the latter does not possess the morphological singularities mentioned above, having instead various flower and inflorescence character states typical of most species of the D. selloa complex.

Dyckia pseudodelicata basically differs from D. delicata in the fertile aspect ( Tab. 1 View TABLE 1 ) by having an inflorescence with thin (2–3.4 mm vs. robust, 4–5 mm diam. [ Fig. 2F and P View FIGURE 2 ]) and numerous first order branches (up to 18 [ Fig. 1D View FIGURE 1 ] vs. absent or up to 7), flowers in the apical region of the branches subverticillate (vs. flowers spaced [ Fig. 2H and R View FIGURE 2 ]) and smaller flowers (1–1.2 cm vs. 1.4–2 cm in length [ Fig. 2G and Q View FIGURE 2 ]), anthers without a rostrum at the apex (vs. with a rostrum [ Fig. 2I and S View FIGURE 2 ]) and thecae with sporangia of different lengths (vs. equal [ Fig. 2I and S View FIGURE 2 ]), stigmatic lobes that are erect (vs. spiraled) at anthesis and smaller (1–1.4 mm vs. 2–2.5 mm in length [ Fig. 2J and T View FIGURE 2 ]). Some morphological characters of Dyckia have been little explored regarding their use in taxonomy, probably because they are inconspicuous, impractical for identification purposes and difficult to observe with the naked eye and/or in herborized material. Nonetheless, here we explore two unusual characters that proved to differentiate D. delicata and D. pseudodelicata : the morphology of the trichomes on the margins of the petals and the position of ovules in relation to the longitudinal axis of the ovary and their disposition in the placenta.

We hypothesize that the suberect position for the ovule was a response to carpel size reduction in the common ancestor of the D. selloa complex, if the D. selloa complex represents an evolutionary lineage. This reduction and suberect position of the ovule has yet to be widely verified among other lineages of the xeric Pitcairnioideae . However, in the earlier divergent lineages of the xeric Pitcairnioideae , such as those that compose Encholirium (having as references the phylogenies of Krapp et al. (2014) and Pinangé et al. (2017)), the locules of the carpels are relatively large and the position and disposition of ovules of most species are identical to that observed in species of Dyckia that do not belong to the D. selloa complex. These characters, however, need to be further investigated. A further increase in carpel size during evolution, as in D. delicata , could be interpreted as a reversal to the ancestral state of the xeric Pitcairnioideae . With greater availability of locular space, the position of the ovules in relation to the longitudinal axis of the ovary became clear again. Thus, the disposition of ovules in a greater number of rows may have arisen in association with this larger space, as observed in D. delicata .

The ovules of D. pseudodelicata are disposed in two rows per locule, with one row per placental attachment line ( Fig. 3G and H View FIGURE 3 ), as is the case for most of the species of Dyckia studied to date. On the other hand, D. delicata may have ovules disposed in 2–4 rows per locule, with one or two rows per placental attachment line ( Fig. 3N and O View FIGURE 3 ). Analysis of Endress’s (2011) review of the diversity, development and evolution of angiosperm ovules reveals that both ovule position in relation to the longitudinal axis of the ovary and ovule arrangement (number of rows) seem to be related to the proportion of available locular space and ovule size, ovule number and direction of ovule initiation sequence in placentae. Kuhn et al. (2020) reported that ovules arranged in a few rows per placental attachment line is an ancestral character in Bromeliaceae . Transitions toward many ovule rows occurred at least twice at the base of a clade, including all genera of Tillandsioideae , except Catopsis , on the one hand, and among Puyoideae and Bromelioideae on the other hand. These transitions are followed by at least three reversals in Tillandsioideae and one, but perhaps more, in Bromelioideae .A transition from many towards lots ovule rows per each placental attachment line is observed at the base of the Werauhia clade within Tillandsioideae , while another transition from few to many ovule rows occurred at the base of the Pitcairnia clade within Pitcairnioideae .

Despite these differences in the position and disposition of ovules between D. delicata and D. pseudodelicata , their seeds are morphologically similar ( Fig. 3I and P View FIGURE 3 ), being oblanceoloid as for other species of Dyckia belonging to the complex and possessing a chalazal appendix which constitutes a poorly developed wing (vs. well developed for the rest of Dyckia ). The anatomy, number, position in relation to the longitudinal axis of the ovary and disposition of ovules are characters to be investigated more widely in the xeric Pitcairnioideae as they seem to have taxonomic importance as diagnostic characters and may be directly related to the unique morphology of the seeds of the D. selloa complex. They are oblanceoloid with a poorly developed chalazal appendix (vs. flated with developed chalazal appendix forming a subfalciform wing in most Dyckia l.s.), a characteristic that appears to be a synapomorphy of the complex. Furthermore, the study of embryological characters can be an important tool for evolutionary analysis and help in phylogenetic reconstructions. 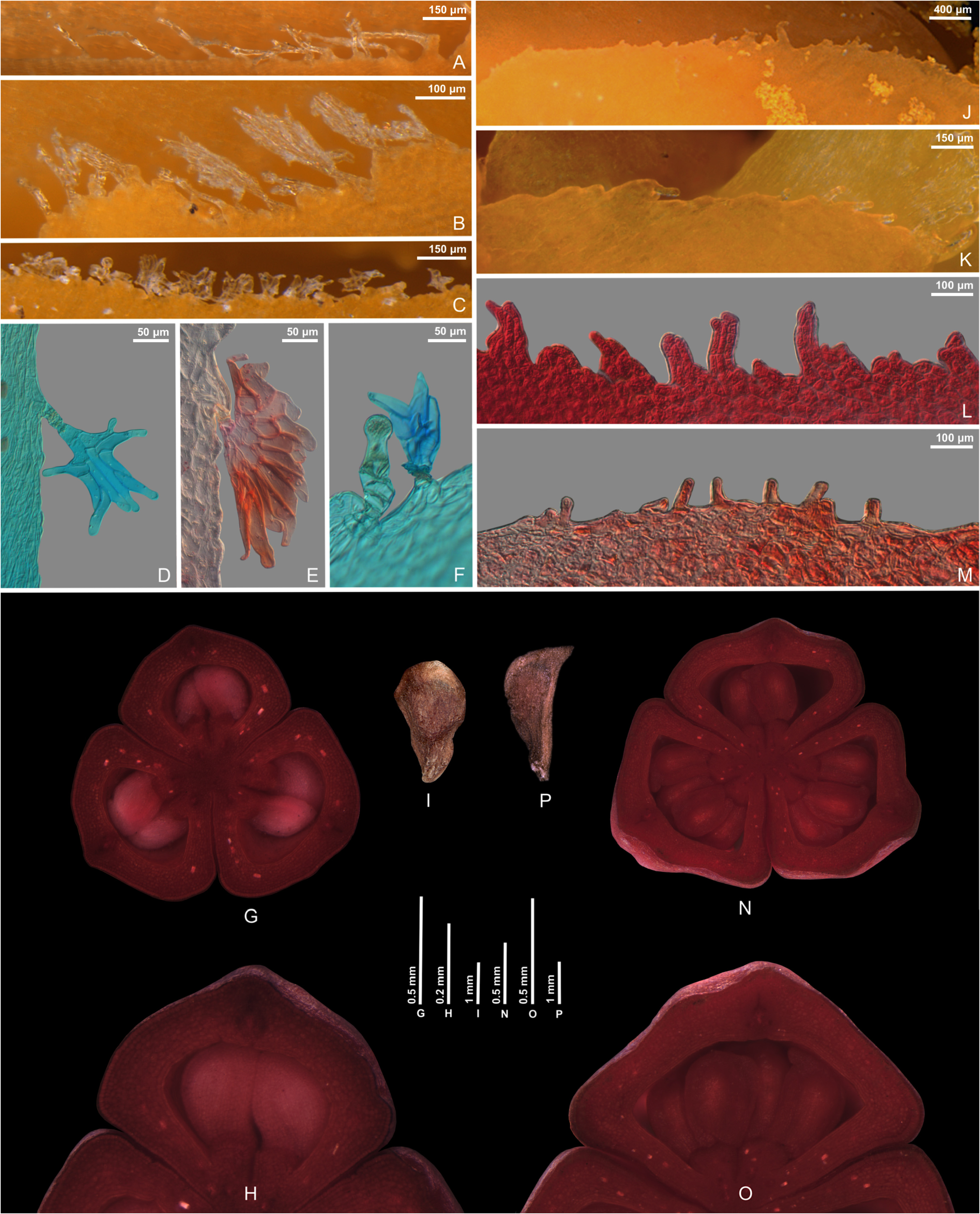