Diagnosis. Ophiacanthid with sub-pentagonal disk; radial shields exposed, triangular in shape and less than a half disk radius in length; disk covered by thin plates; some plates bearing a spinelet; spinelets long, hollow with a smooth tip or 2–3 pointed spires.

Holotype description. disk sub-pentagonal (d.d. 8.3 mm). Arms at least four times disk diameter. Disk covered with thin scales, many carrying a spinelet. Spinelets long, hollow, rugose, with tip of spinelet produced into a smooth point, sometimes with two or three small pointed spires; spinelets in middle of disk finer than those on the periphery or in the interbrachial region. Radial shields exposed, approximately triangular in shape; each shield pair separated along whole length; length extending slightly shorter than a quarter of the disk diameter. Ventral interbrachial area covered with small scales. Spinelets present but shorter and with a lower density than aboral surface.

Variation (Paratypes). Large individuals conform to the description of the holotype. Smaller individuals, d.d. 3.5 to 6 mm, do not have thickened skin over the oral surface so the plates are clearer. Oral shields are more rounded slightly wider than long. Jaws with three to four oral papillae which are slightly more rugose than in larger specimens. However in other characters, such as tentacle scale number and arrangement, smaller specimens resemble the larger, although the gap between the oral papillae and oral tentacle scales is more obvious. Oral shields triangular slightly more elongated and rounded. Dorsal arm plates on smaller specimens are triangular with a convex distal edge and are separated, not contiguous. Often just two tentacle scales The number of scales may be the result of a larger scale being split perhaps during development thus resulting in three scales not two.

Distribution and ecology. This species is only known from the type locality. It was collected from a coral thicket ( Dendrophylia cf. alternata   , mostly dead branches with a few living polyps) at a single station on the flanks of Captain Arutyunov MV at a depth of 1390 m, together with Ophiactis abyssicola   , Ophiacantha aristata   and Amphioplus hexabrachiatus   .

Etymology. This species is named after the area (Gulf of Cadiz) where it was first discovered; Gades is the old Roman name for Cadiz.

Remarks. Placing this species within Ophiopristis Verrill, 1899   represents a compromise and potentially expands the definition of the genus. There are a number of characters which appear to be unique. The emergent radial shields are unusual in the Ophiotominae  and in Ophiopristis   , the arrangement of the oral papillae and second oral tentacle scales are also distinct and finally the development of thickened integument has not been reported within species of the genus. However, such variation in the degree of skin covering the disk has also been noted for other ophiacanthids, for example Ophiolebes scorteus Lyman, 1878   , without resorting to the erection of a new genus. It is possible that this combination of characters within this species represents a new genus, however as Paterson (1985) and O’Hara and Stöhr (2006) point out, the genera within Ophiacanthidae   are not well defined and so adding another would only serve to add to this problem. Ophiopristis gadensis   sp. nov. share the following features with other species of the genus - the arm spines are slightly flattened with a rugose edge, the oral and second tentacle papillae are separated either physically or by shape and size, the tentacle scales are multiple in proximal arm segments. Ophiopristis   can now be defined as: jaws longer than broad, flanked on each side by four or more oral papillae, second oral tentacle pore superficial opening near the surface of the jaw, armed with tentacle scales similar in size and shape to the oral papillae, sometimes confluent with oral papillae but in some separated; adoral shields long and narrow, separating the oral shield from the first lateral arm plate; disk covered with small scales carrying an elongated spinelet, often long, hollow and with pointed or furcate tips; radial shield usually concealed but maybe exposed; arm spines flattened, carrying a row of sharp points along each edge; tentacle pores armed with up to four tentacle scales on proximal first two to four pores decreasing to one to two large scales on segments thereafter.

According to Stöhr and O’Hara (2007) there are eight species of Ophiopristis   . O. gadensis   sp. nov. differs in the type of disk spines which are more rugose and not smooth as in most of the other species; the presence in larger specimens of the thickened integument and the distinct separation between the oral papillae and the second oral tentacle scales. Ophiopristis gadensis   sp. nov. is similar to O. dissidens Koehler, 1905   in having three tentacle scales on proximal tentacle pores but differs in that the disk spinelets are not smooth, glassy and hollow. A comparison of the species is given in Table 2. 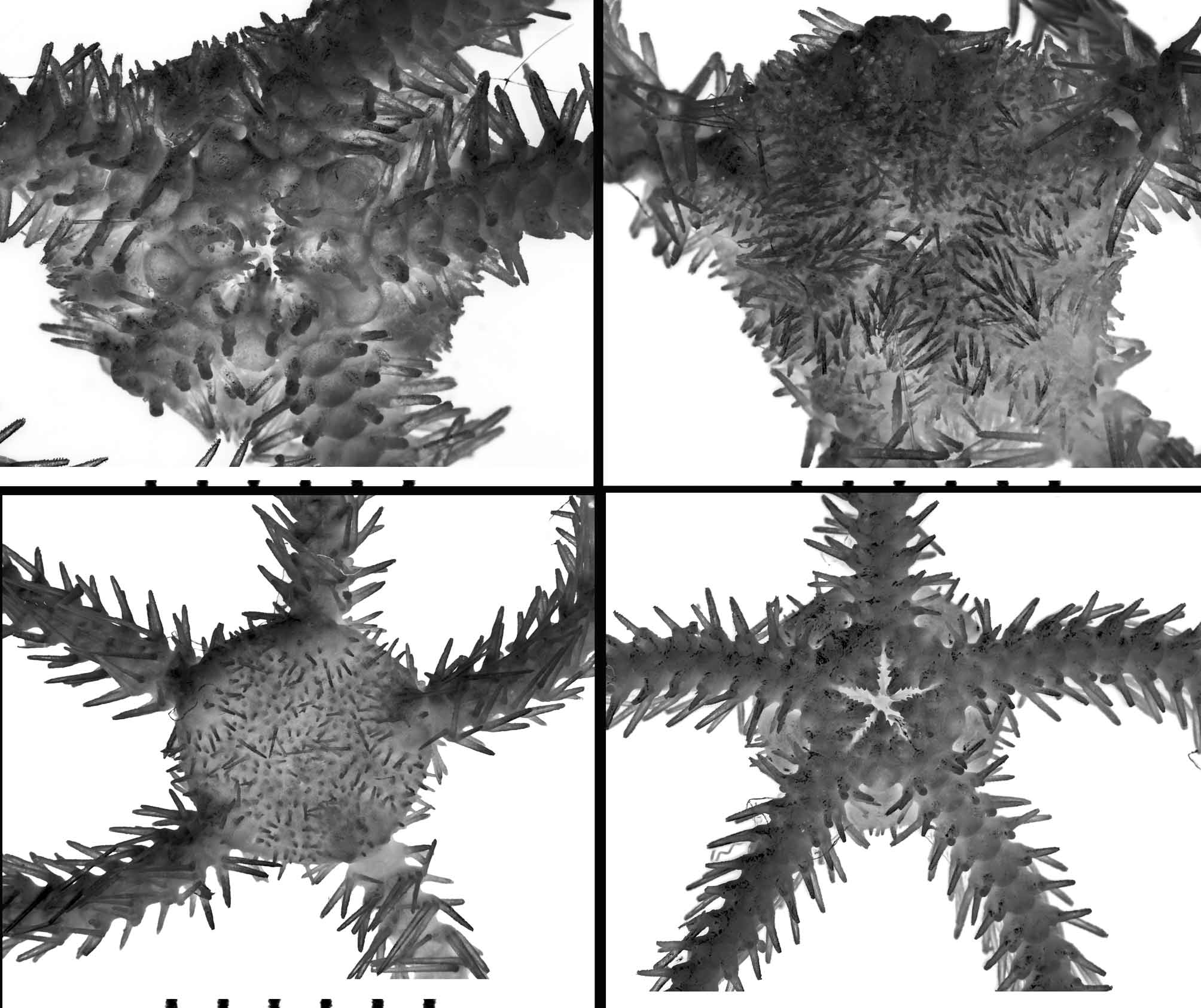 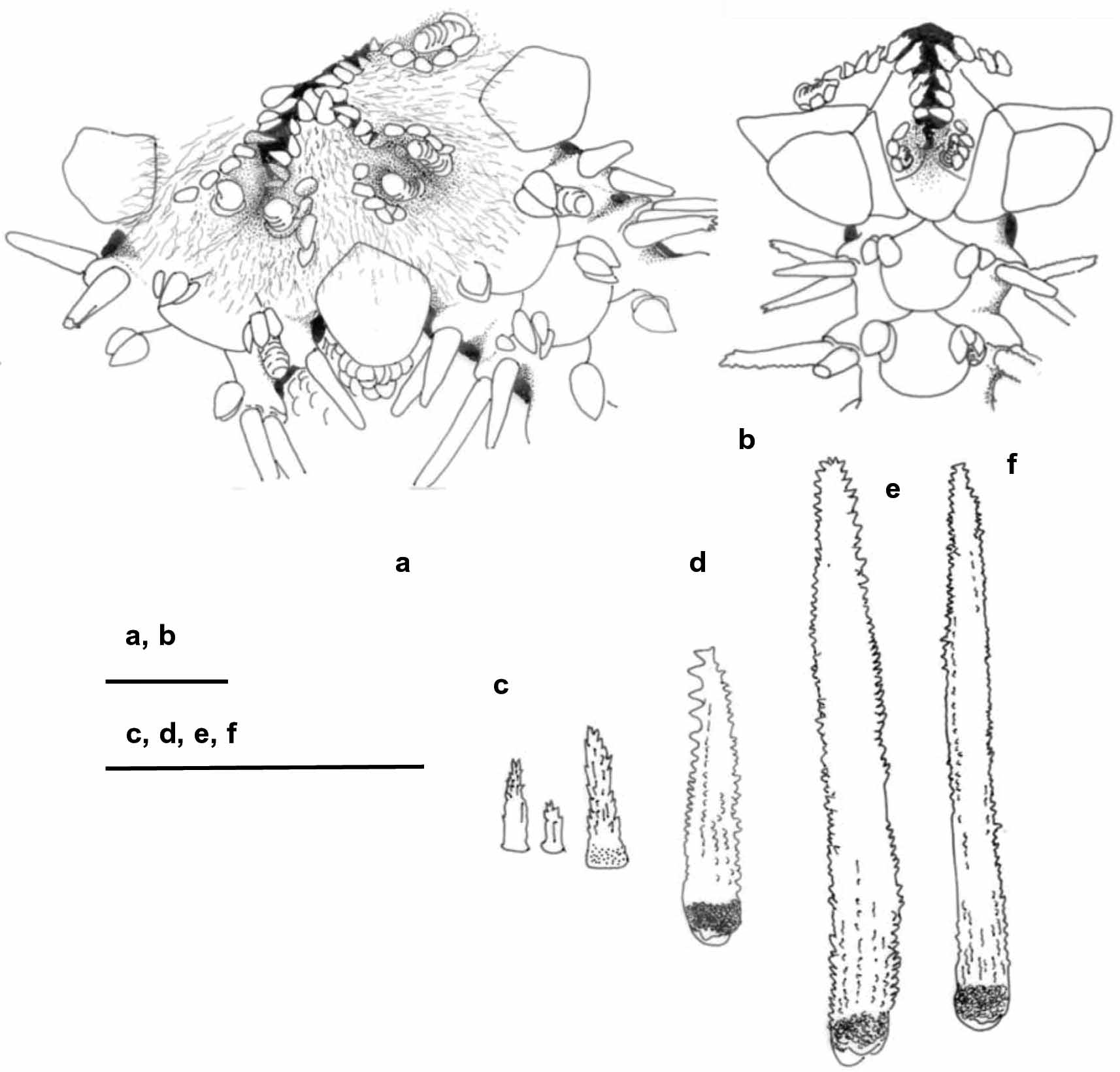