Hymenoepimecis japi   shares with Hymenoepimecis cameroni Townes, 1966   the forewings uniformly fuscous and pterostigma brownish but leg pigmentation is different between these species. In H. cameroni   fore- and middle legs are rufostestaceous whereas in H. japi   they are yellowish; the hind coxae have only the sides and lower surface infuscated in H. cameroni   ; in H. japi   they are uniformily infuscated. The sides of the central, basal part of the first metasomal tergum of H. japi   is not keeled as in H. cameroni   .

Female (holotype). Body length 9.2 mm; fore wing length 8.9 mm; hind wing length 6.6 mm; antenna with 36 segments; lower face ( Figure 1E View Figure 1 ) elongated 0.7 times as broad as high, smooth and bearing hairs, with two shallow grooves in the median part, head in dorsal view with gena long, posterior ocellus separated from the eyes by about 0.4 times its own maximum diameter; distance from tegula to the head about 0.7 times the distance between the tegula and the margin of the propodeum, scutellum in profile convex; mesopleuron smooth and polished, bearing thin and sparse hairs; propodeum smooth and polished with sparse hairs and lateral longitudinal carina present only posteriorly, submetapleural carina absent. Fore wing ( Figure 1B View Figure 1 ) with cu-a interstitial to base of Rs + M, 2 rs-m about 0.5 times as long as the abscissa of M between 2 rs-m and 2 m-cu, 3 rs-m absent. Hind wing ( Figure 1B View Figure 1 ) with the abscise Cu 1 equidistant between M and 1 A. Hind leg with tibia + tarsus 0.5 times the length of the forewing. Tergite I ( Figure 1C View Figure 1 ) 1.5 times as long as it is posteriorly broad, lateral carina present only anteriorly; Sternite I ( Figure 1D View Figure 1 ) with a low rounded prominence, tergites I–IV smooth bearing sparse hairs all around. Ovipositor 0.9 times as long as tibia.

The cocoon is fusiform, 11 mm long and 3.5 mm at its maximum diameter. It is golden, tightly spun of coarse silk and presents a caudal orifice.

The specific name is a noun in apposition taken from the type locality.

Hymenoepimecis japi   sp. nov. was observed parasitizing females of L. roseosignata   . This spider constructs horizontal, two-dimensional orb structures with open hubs ( Figure 1F View Figure 1 ). Larvae remain attached to the dorsal surface of the spider’s abdomen during their development, feeding on the spider’s fluids through small orifices perforated in several positions. Spiders carrying eggs ( Figure 1G View Figure 1 ), first and second instar larvae presented normal webs but we observed a third instar larva killing a spider in a very modified cocoon web ( Figure 1H–L View Figure 1 ). This web was composed of three axes, each one made of several radial threads ( Figure 1J,K View Figure 1 ), and a closed hub. The line used by the parasitoid to attach the cocoon was connected to this hub. A second web with the same characteristics and a cocoon attached was found. After the emergence of the adult in the laboratory we could determine that it belonged to the same species. 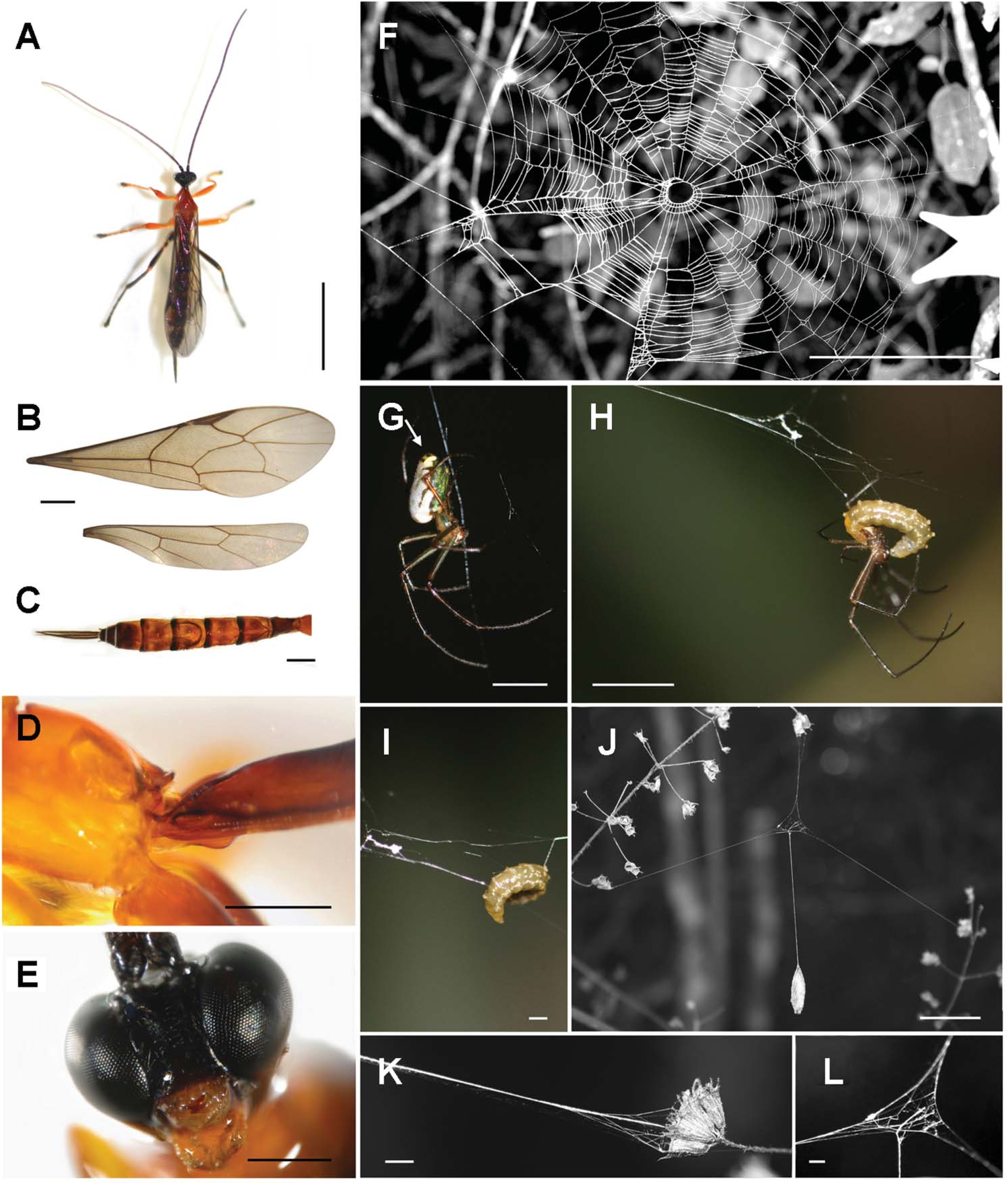