Etymology. The epithet is derived from the type locality near which all of the known Louisiana specimens have been taken, the town of Abita Springs, St. Tammany Parish, Louisiana, USA.

Diagnosis. Lithophane abita   is a medium-sized species of Lithophane   with a gray forewing and pinkish-fuscous hindwing. Th e forewing maculation tends to be pale and muted, except for a contrasting black line in the fold connecting the deeply zigzagged antemedial and postmedial lines. In these superficial characters, it has the appearance of some species in the Lithophane lepida Grote   species-group of which only Lithophane adipel (Benjamin)   ( Fig. 3 View Figures 1-7 ) occurs in southeastern United States. It is even more similar to Lithophane thaxteri Grote   ( Fig. 4 View Figures 1-7 ), which like L. abita   , has a brown flush to the area around the reniform spot and a black line defining the lower edge of the reniform spot, but L. thaxteri   occurs in the boreal zone of Canada and in eastern United States as far south as New Jersey, but probably will not be found within the range of L. abita   . The male genitalia of L. abita   , however, are unique within the genus and the characteristic shape of the apices of the valves can be seen by brushing away some scales from the end of the abdomen. Th e digitus of the right valve projects beyond the apex of the valve as a long, curved, saber-like spine that is almost ⅔ as long as the valve ( Fig. 5 View Figures 1-7 ); that of the left valve is short, stout, and apically blunt with the part of the digitus extending beyond the valve about ¼ of the length of that of the right valve. Th e spine-like process at the apex of the right valve can often be seen with the naked eye protruding from the end of the abdomen. The association of L. abita   with bald cypress ( Taxodium distichum Rich.   ), the probable larval host, is also unique within Lithophane   .

Male genitalia (n = 6): genital capsule ( Fig. 5 View Figures 1-7 ) with supporting ring modified, so enlarged vinculum and pleural sclerite occupy basal ⅔ of ring, presumably to support greatly enlarged base of valve; tegumen proportionally reduced to dorsal ⅓ of ring; uncus short, cylindrical, expanded at apex; juxta a very large diamond-shaped plate oc- cupying most of area inside genital ring; valves short and triangular, very large at base and tapering to narrow apex; valves asymmetrical; right sacculus large, twice as long as cucullus; cucullus reduced with sclerotized finger-like process at base of cucullus on dorsal margin of valve; apical part of cucullus reduced to rounded, almost membranous flap without any trace of a corona; digitus massive, arising from costal margin of valve, covering basal b of cucullus, then bending dorsally to project posterodorsally from end of valve as a long, tapered, saber-like spine; clasper reduced to Y-shaped sclerite at apex of valve with ampulla projecting beyond costal margin of valve as lightly sclerotized, finger-like process; left valve similar to right valve, except sacculus not as enlarged dorsally at base, costal process at base of cucullus triangular, part of left digitus projecting from valve ¼ as long as saber-like extension of right digitus, and apex of left digitus blunt and rounded. Aedeagus ( Fig. 6 View Figures 1-7 ) cylindrical, heavily sclerotized, about 6 × as long as wide; vesica about 1½ × as long as aedeagus; basal 1/6 as wide as aedeagus; apical part inflated and sac-like, curving in an arc 180° to project anteriorly; vesica with two short diverticula, one short preapical on dorsal surface and one on ventral surface at apex; apex of vesica with two subapical patches of spine-like cornuti, one dorsal and one ventral. Female genitalia (n = 5) ( Fig. 7 View Figures 1-7 ): corpus bursae with prominent postmedial constriction giving it a figure 8-shape; without signa; posterior part of corpus bursae with short, lightly sclerotized, appendix bursae to left of ductus bursae; ductus bursae about ⅓ as long as corpus bursae, sclerotized posteriorly but more lightly sclerotized anteriorly and wider at corpus bursae; ostium bursae sclerotized, tapered anteriorly, truncated abruptly at membranous connection with ductus bursae; anterior apophyses slightly shorter, but much stouter, than posterior apohyses, about ¼ × longer than ring of abdominal segment VIII; anal papillae lightly sclerotized, rounded at apex, about as long as membranous connection to abdominal segment VIII; covered by mixture of short and longer hair-like setae.

Biology and distribution. Within Louisiana, Lithophane abita   is single brooded with adults on the wing from November 21 to March 29 ( Fig. 8 View Figure 8 ). Elsewhere the flight season extends from 17 October (Maryland) to early April (Mississippi and North Carolina). Lithophane abita   has been confirmed from the states of Alabama, Florida, Georgia, Louisiana, Maryland, Mississippi, and North Carolina. Th e suspected host plant is bald cypress, Taxodium distichum Rich. In   Maryland the three known localites are in bald cypress swamps within a few kilometers of the northernmost site of natu- rally occurring bald cypress trees. In Florida, this moth is often found in or very close to pond cypress domes (R. M. Gillmore, pers. comm.). A single Florida specimen was labeled as captured at fruit bait.

Remarks. R. M. Gillmore provided the authors with numerous additional Florida records acquired from various sources, from the counties already listed in the paratype series. Th ese specimens are not included as paratypes due to their poor quality.

Within Louisiana, L. abita   was captured using ultraviolet light traps only at the Abita Springs location despite 39 continuous years of collecting using the same collecting methods throughout the State. No species of Lithophane   was previously recorded for Louisiana by Chapin and Callahan (1967), who published the only list of Noctuidae   for the state. However, intensive collecting by the senior author at the type locality of L. abita   has turned up about 10 Lithophane   species, some requiring further study to confirm their identity.[move this and the next paragraph to beginning of Discussion section]

Reference to this undescribed species can be found dating back 44 years to Kimball’s (1965) book on the Lepidoptera   of Florida. Under the heading Lithophane   sp., Kimball (1965: 93) states that [John G.] Franclemont is describing it. Kimball listed six specimens from the Florida counties of Alachua, Escambia, Hillsborough, and Jefferson with collecting dates on three of the specimens from Lutz, Hillsborough Co., dating back 93 years. Th e oldest specimens of L. abita   we were able to find were captured 98 years ago in 1911, also at Lutz, Florida. 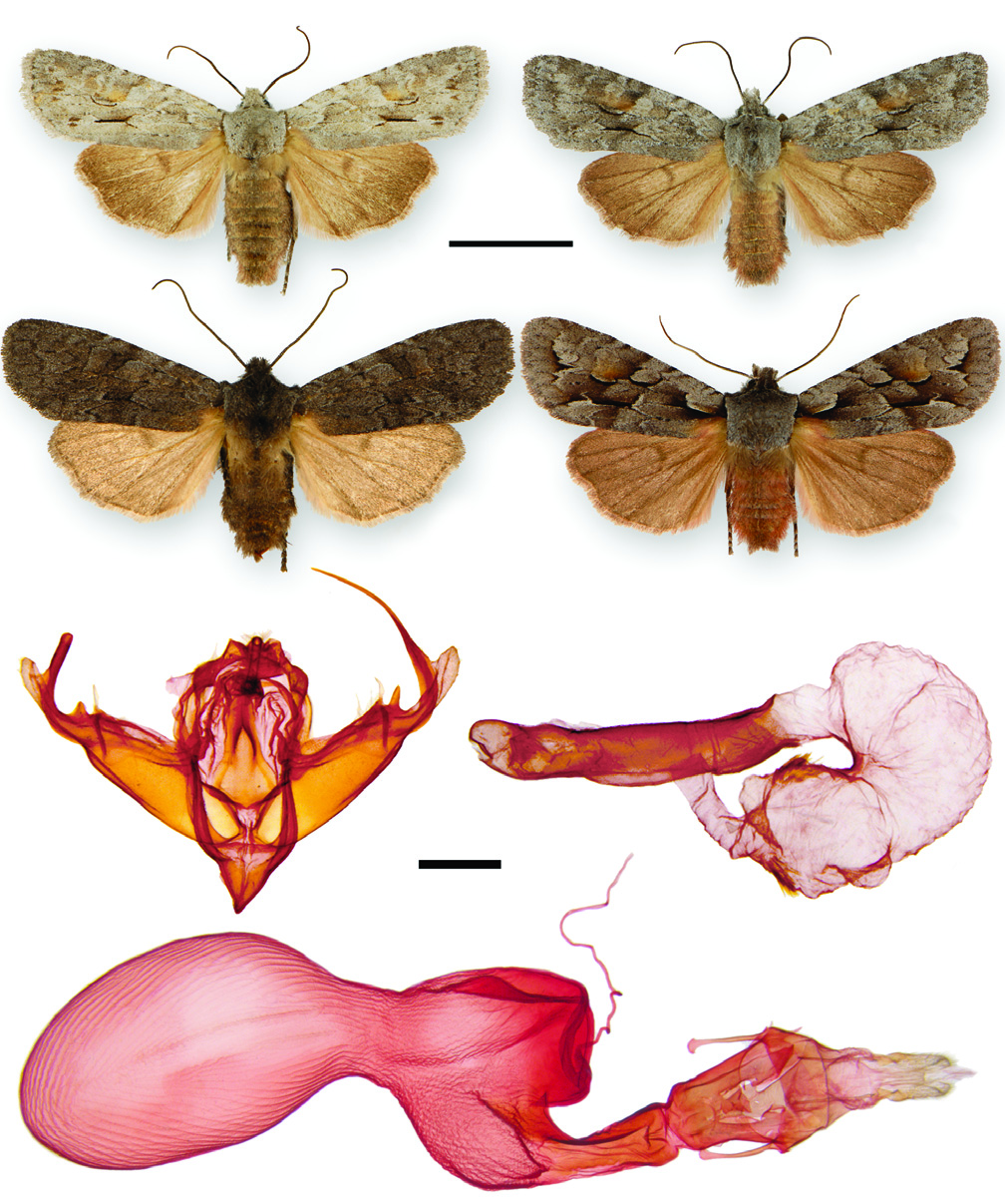