Discussion. Synobius Sharp   is a little-known genus containing two described species, Synobius lobicollis Sharp, 1899   , described from Panama, and Synobius lobatus ( Grouvelle, 1896)   , from Brazil. Grouvelle originally described his species in Nausibius   and, although differing from this genus in general facies, it does seem to be more closely related to it than any other in the family. Grouvelle (1913) transferred his species to Synobius   remarking that an examination of the figures of S. lobicollis   and S. lobatus   showed these species were very closely related. Indeed, one of the labels that he attached to his holotype following the establishment of the new genus by Sharp, suggests he thought that they might be conspecific.

Sharp, when describing the genus, remarked that it was apparently allied to Nausibius   , Cathartus Reiche   and Hapalips Reitter   (the last of these is now placed in the Erotylidae   ). He stated that ‘… the greatest peculiarity of the genus is the peculiar, glabrous, rigid antennae.’ and drew attention to the fact that the structure of the sterna is that normal in the ‘Silvanides’. In his accompanying species description, Sharp anticipated a myrmecophilous or termitophilous habit for this insect. The habitat data on the majority of specimens examined (see descriptions below) tends to confirm an inquiline relationship as they were found in nests of bees of the genus Trigona Jurine   ( Apidae   ).

Diagnosis. This genus ( Fig. 1–17 View Figures 1–6 View Figures 7–10 View Figures 11–17 , 123 View Figures 123–124 ), as represented by the two known species, may be distinguished from Nausibius   by its antennae, which have a very small, narrow terminal segment; the pronotum, which is without lateral teeth, has a strong indentation before the anterior angles that form rounded and in front slightly declivous lobes; and the elytra, which lack obvious striae (an unusual condition in Nausibius   although it does occur). The tarsi in Synobius   are simple ( Fig. 2 View Figures 1–6 ) and there are no antennal grooves on the head. Obvious secondary sexual characters have not been found although with larger individuals, more transverse pronota may be indicative of females, as is often the case in Nausibius   and some other silvanine genera.

Apart from the types in the MNHN ( S. lobatu   s) and NHML ( S. lobicollis   ) the species are known to the author only from a small number of specimens from Nevermann’s collection made in the 1930s and now mainly in the USNM, but also NHML and MIZP (just S. lobicollis   in these last two depositories). Nevermann believed that his material represented two new species and labelled the specimens as such but did not publish descriptions. Comparison of Nevermann’s specimens with S. lobatus   and S. lobicollis   has shown that they represent these two extremely similar and very obviously closely related taxa, which are maintained here as distinct species and redescribed. 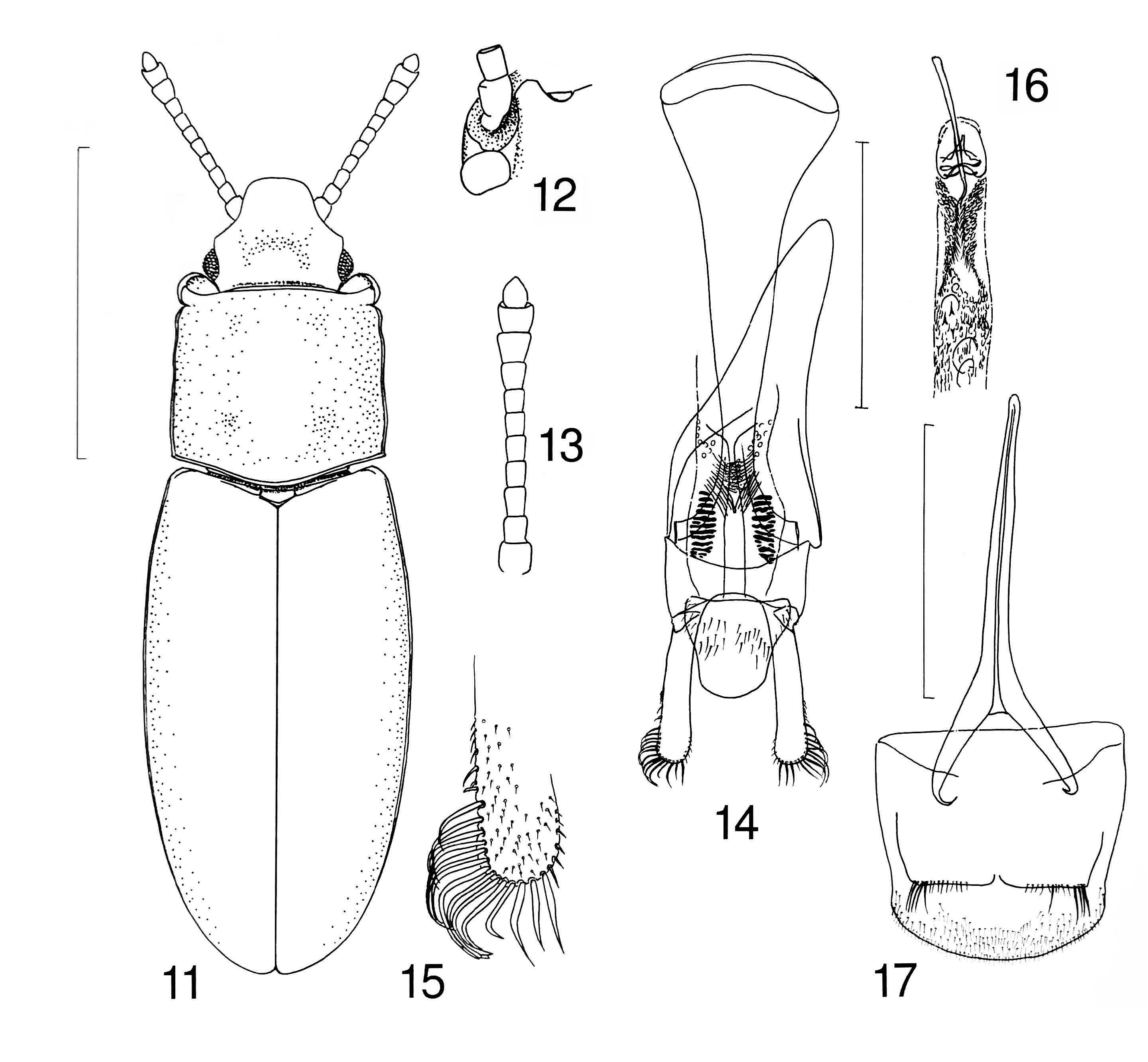