Diagnosis. In males, the distance from the vertex to the anterior tip of the frons is 1.3 X the width of the frons at the level of the anterior ocellus, and the frons is 1.4 X wider than long. At the anterolateral corner of the frons, there is a tight lateroclinate cluster of 4–5 elongated setae (as long as the distance between inner vertical setae) appearing as one very thick seta. On the legs, the femora are dark grey pruinose, except the distal tip is yellow. The pleuron is silvery grey pruinose and lighter in color than the scutum. The scutum has dorsocentral setae 0+2, with the posterior seta at most 2 X longer than the anterior one; the anterior notopleural seta is 1.5 X longer than the posterior one. In the male pregenital segments and genitalia: syntergite 7+8 is entire, lacking a median strip; the surstylar lobe is articulated, but partly fused, with the epandrium; the phallus from ventral view is awl-shaped, with the middle part parallel-sided, and the tip abruptly curved and sharp.

Head ( Figs 12–16View FIGURES 12–17). 1.4–1.5 X higher than long; 1.3–1.4 X wider than high; mostly dark or silvery grey with exceptions following. Vertex with outer vertical seta longer than inner one by 1.7–2.0 X; in ♂, distance from vertex to anterior tip of frons 1.3 X width of frons at level of anterior ocellus. Postocellar setae absent. Ocellar triangle sexually dimorphic; in ♂, elongate, only slightly tapering to anterior margin of frons, slightly raised and distinct from fronto-orbital plate, anteriorly ending in dense patch of short white setulae on distinct yellow spot and extending over antennal bases; in ♀, extending most of distance of frons, not raised, distinguishable from fronto-orbital plate by only slight color difference, anteriorly lacking patch of distinct setulae, lacking yellow spot, and not extending over antennal bases, but instead abruptly curving downward into plane with lunule; ocelli in equilateral triangle, on small raised tubercle, with ocelli placed well anterior to vertex; setulose within triangle and behind posterior ocelli. Ocellar setae absent. Eye 1.1–1.2 X higher than long; height 4.3–5.2 X genal height. Frons with slightly darkened vitta along edge of ocellar triangle in ♂, without such vitta in ♀; 1.4 X wider than long in ♂, 1.8–1.9 X in ♀; with lateral edges only slightly diverging anteriorly, 1.0–1.2 X wider at level of lunule than at level of anterior ocellus. Mid frontal vitta depressed in ♂, not depressed in ♀; oriented downward below tip of ocellar triangle, and meeting lunule at sharp angle in ♂ and in same vertical plane with lunule in ♀. Fronto-orbital area lacking fronto-orbital setae; in ♂ with row of 6–7 setulae oriented slightly lateroclinate and with distinct cluster of 4–5 elongated (as long as distance between inner vertical setae), yellowish lateroclinate setae (appearing like 1 very thick seta) at anterolateral corners, and in ♀ with 10 or more setulae and with no cluster of elongated setulae anterolaterally. Lunule silvery grey pruinose above antennae, strongly depressed below mid frontal vitta in ♂, in same plane with mid frontal vitta in ♀; narrowly arched, height 0.3–0.4 X frons length; with 0–2 small, fine setulae. Antenna entirely black; bases separated by small carina, with area between antennal bases shiny black, lacking pruinosity; 1st flagellomere short, rounded, covered with short thick white setulae; arista with distal segment 3.6–4.2 X longer than basal. Face, parafacial and gena silvery grey pruinose. Face strongly receding. Parafacial narrow. Gena with one strong genal seta in addition to several setulae in front and behind. Clypeus black; small, barely exposed. Palpus black; spatulate; densely setulose, larger in ♀. Mouthparts very small and held within oral cavity above palpi; prementum and labellum dark.

Remarks. Male genitalia are a critical component of chamaemyiid identification. However, because there was no ambiguity as to the identity of this species relative to the other two species of this genus, the male abdomen was not dissected. Most genitalic characteristics (except the hypandrium, phallapodeme, and part of the basiphallus) are visible in the undissected state, so this author believed that because it is the sole male known for the species, it was more important to leave the specimen in its pristine condition, where external characteristics of the abdomen can also be studied. By the visible genitalic characteristics, this species differs only subtly from Vitaleucopis scopulus  , in that Vitaleucopis astonea  has a surstylus that is partly fused to the epandrium while it is fully articulated and separate in Vitaleucopis scopulus  . In addition, several external characters can be used to differentiate those species, including the different number of dorsocentral setae (0+2) and the conformation of the frons (the length of the head from dorsal view, from the vertex to the tip of the frons is 1.3 X the width of the frons at the level of the anterior ocellus, and the width of the frons at the level of the anterior ocellus is 1.4 X the length of the frons from the anterior ocellus to the tip) and of syntergite 7+8 (entire and undivided). If the diversity of this genus becomes an issue, the specimen will still be available for dissection at a later date if necessary. 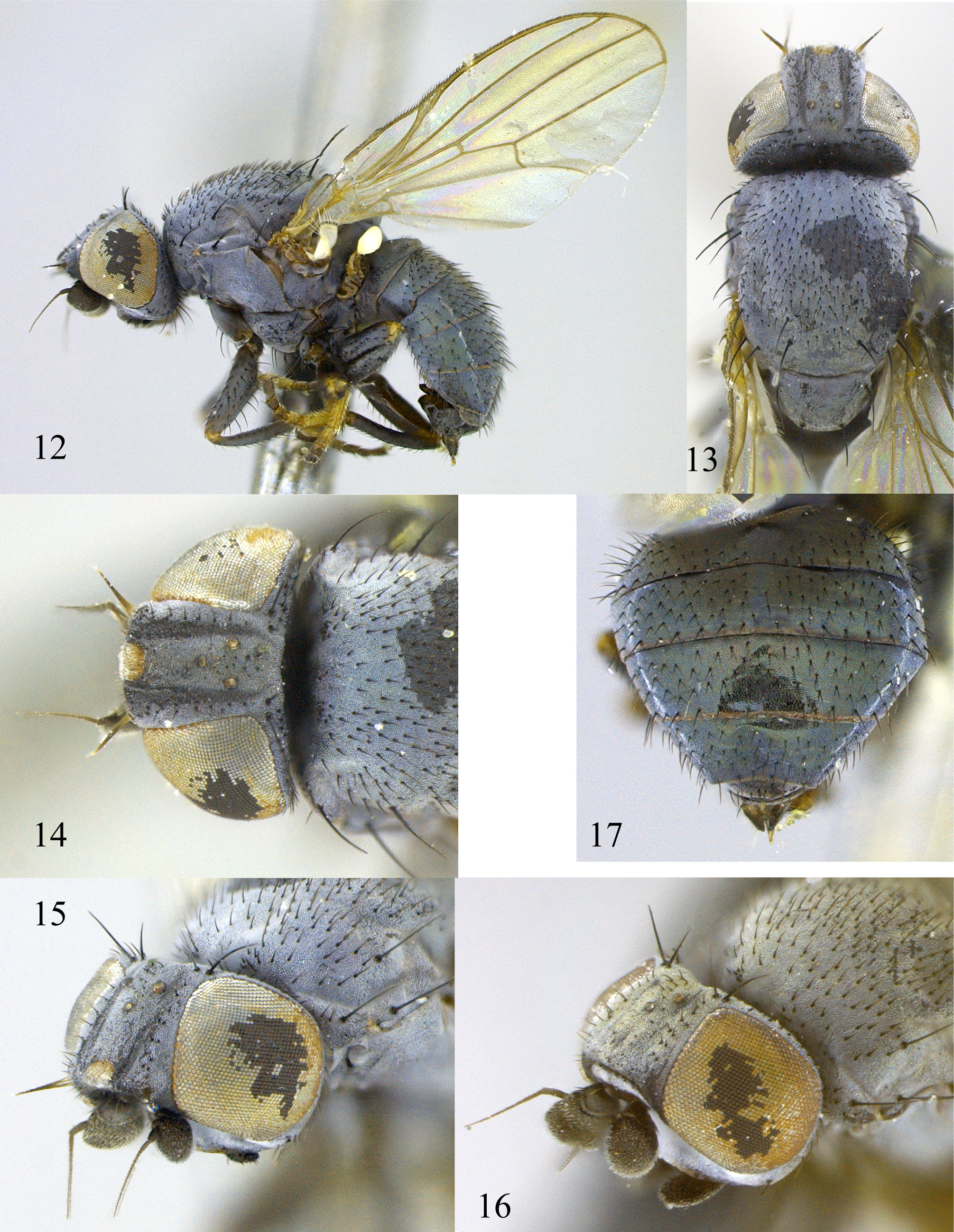 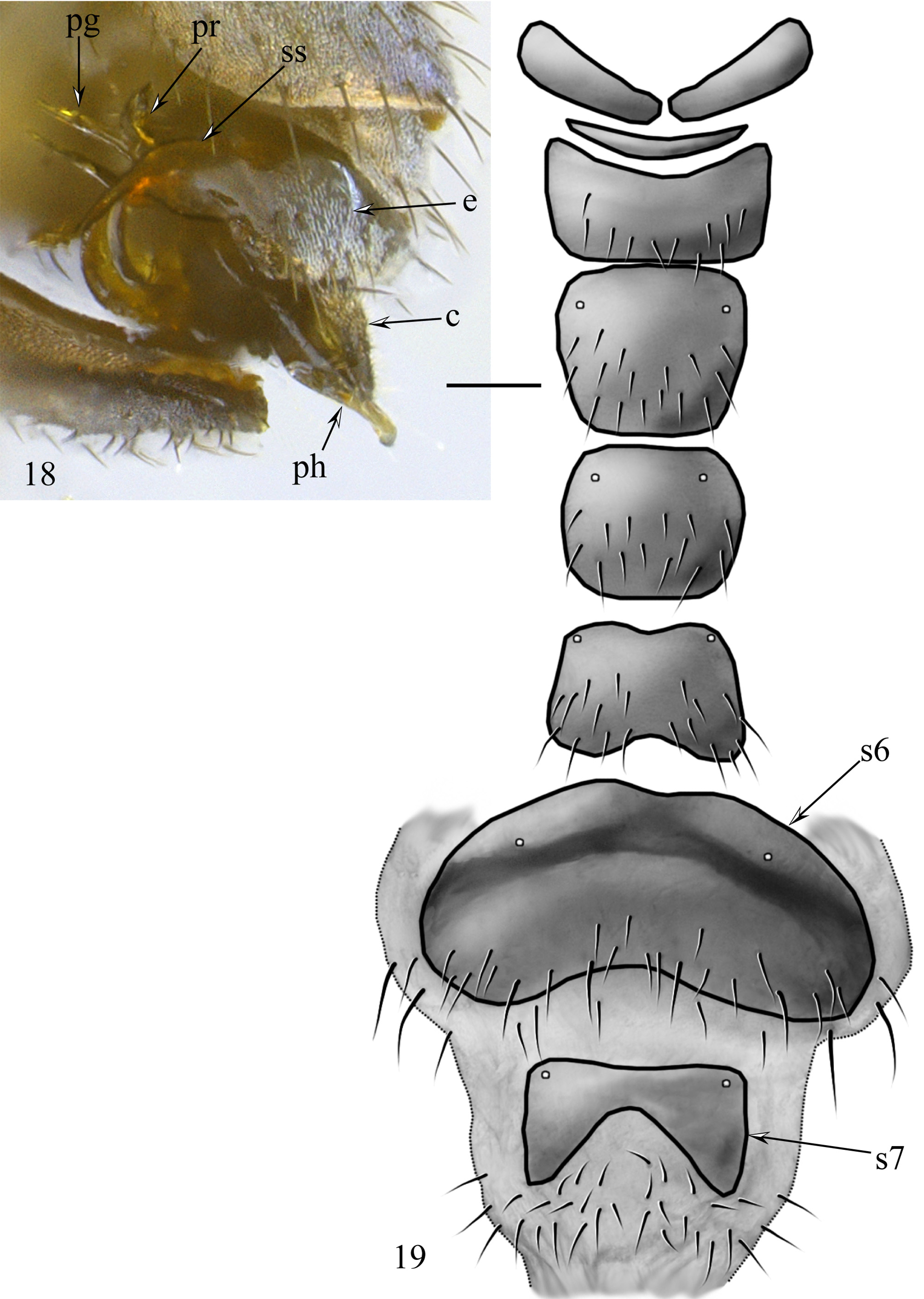