Diagnosis. R. nigropunctata   sp. n. is striking for its coloration: the pale face blotched with scattered black dots is unique within the genus. The stridulatory file on the underside of the left tegmen is with 2.4 mm about as short as in R. variata brevis   ssp. n., but the density of the stridulatory teeth on that file with 38 teeth per mm in the middle of the file is the highest within the genus. The titillators of R. nigropunctata   have an extra projection between the granular extension above the U-shaped curvature and the tip of the titillators that is strongly widened with little lobular margin not narrow as in R. picta   and R. arfak   sp. n. The shape of the male cerci with a sub-truncate dorsal apical lobe that has only the proximal angle triangularly projecting, and a prolonged and dorsally swollen ventral apical lobe resemble the situation in R. camela   sp. n.; R. nigropunctata   differs by the projecting proximal angle of the dorsal apical lobe that is less projecting but down-curved on proximal side while it is larger and flat in R. camela   .

Description male. Fastigium verticis up-curved and laterally compressed, with tubercle on dorsal side in subbasal area, in apical area narrow and faintly downcurved, tip acute; on ventral side separated from fastigium frontis by a step; length of fastigium verticis before eyes 3.0 mm, greatest eye diameter 1.9 mm. Tegmen in apical half triangular with rounded tip ( Figs. 3 View FIGURE 3 O–P). Stridulatory file on underside of left tegmen straight in middle, curved at both sides; 2.4 mm long, with about 105 stridulatory teeth, in middle of file with 38 teeth per mm ( Fig. 4G View FIGURE 4 ). Mirror of right tegmen about oval with both lateral tips sub-angular, about 1.5 mm long, 1.9 mm wide.

Cerci with dorsal apical lobe curved mediad, terminating into a broad, sub-truncate but little irregular apical margin that has the proximal angle little but distinctly projecting and the distal angle very faintly produced ( Fig. 5C View FIGURE 5 ); the ventral apical lobe is slightly narrowed in basal area behind the transverse bulge ( Fig. 7U View FIGURE 7 ), afterwards with faintly concave ventral surface and distinctly convex dorsal surface; apical margin faintly sinuate with a small curved tooth from about middle of margin pointing mediad ( Fig. 6H View FIGURE 6 ). Titillators with basal area curved; above the U-shaped curvature in mid-length with a granular extension that has the upper margin little lobular and is roundly extended on proximal side, while on distal side it is extended and almost reaches to tip of titillators but is subdivided by a V-shaped incision before apical third; the apical branch of the titillators is covered over the whole length with strong teeth; the extra apical sclerites are curved but simple, the apical lateral sclerites roughly oval ( Figs. 8G View FIGURE 8 , 9G View FIGURE 9 ).

Etymology. The name of the new species refers to the black dotted face; from Latin punctata dotted. 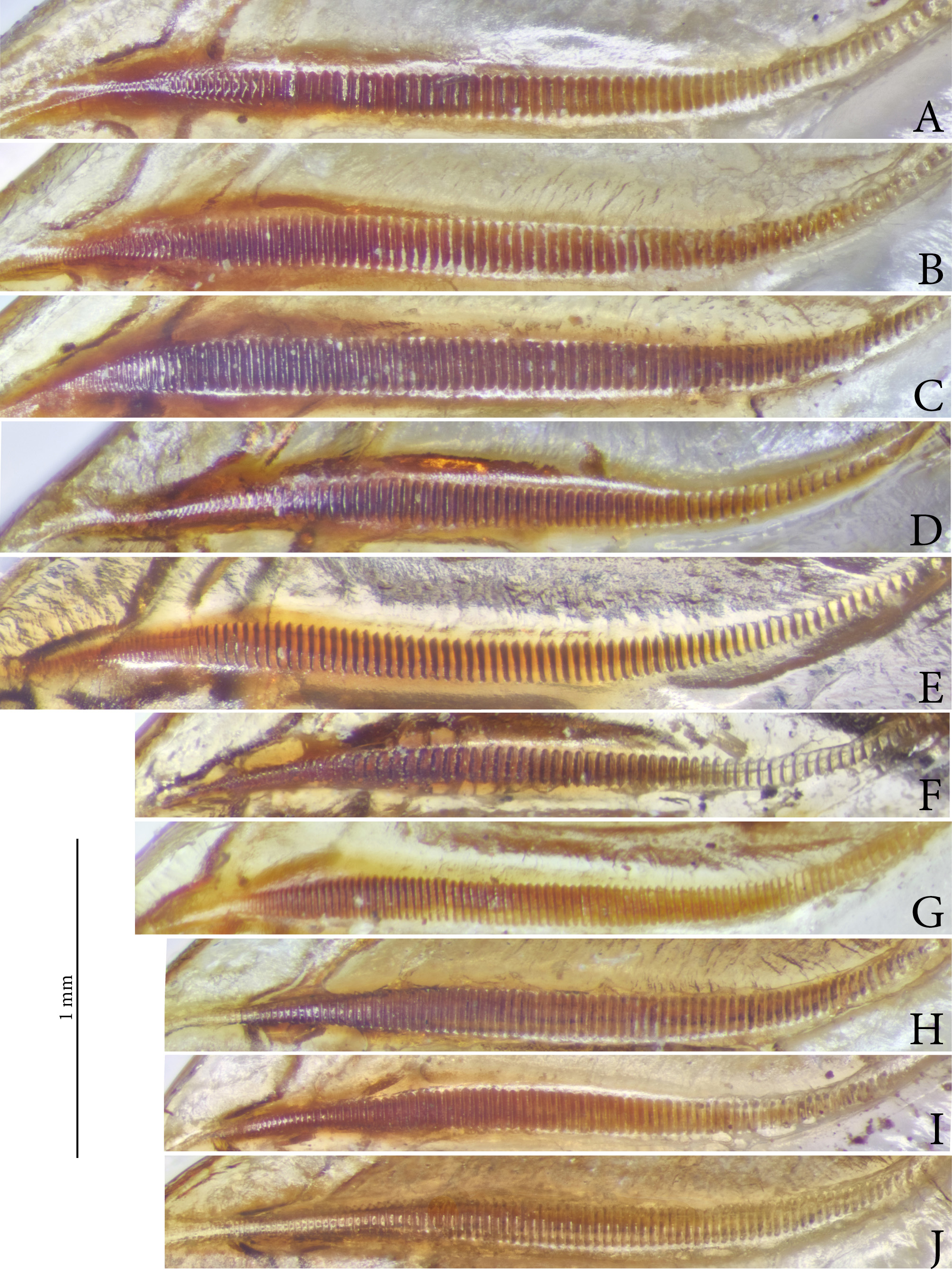 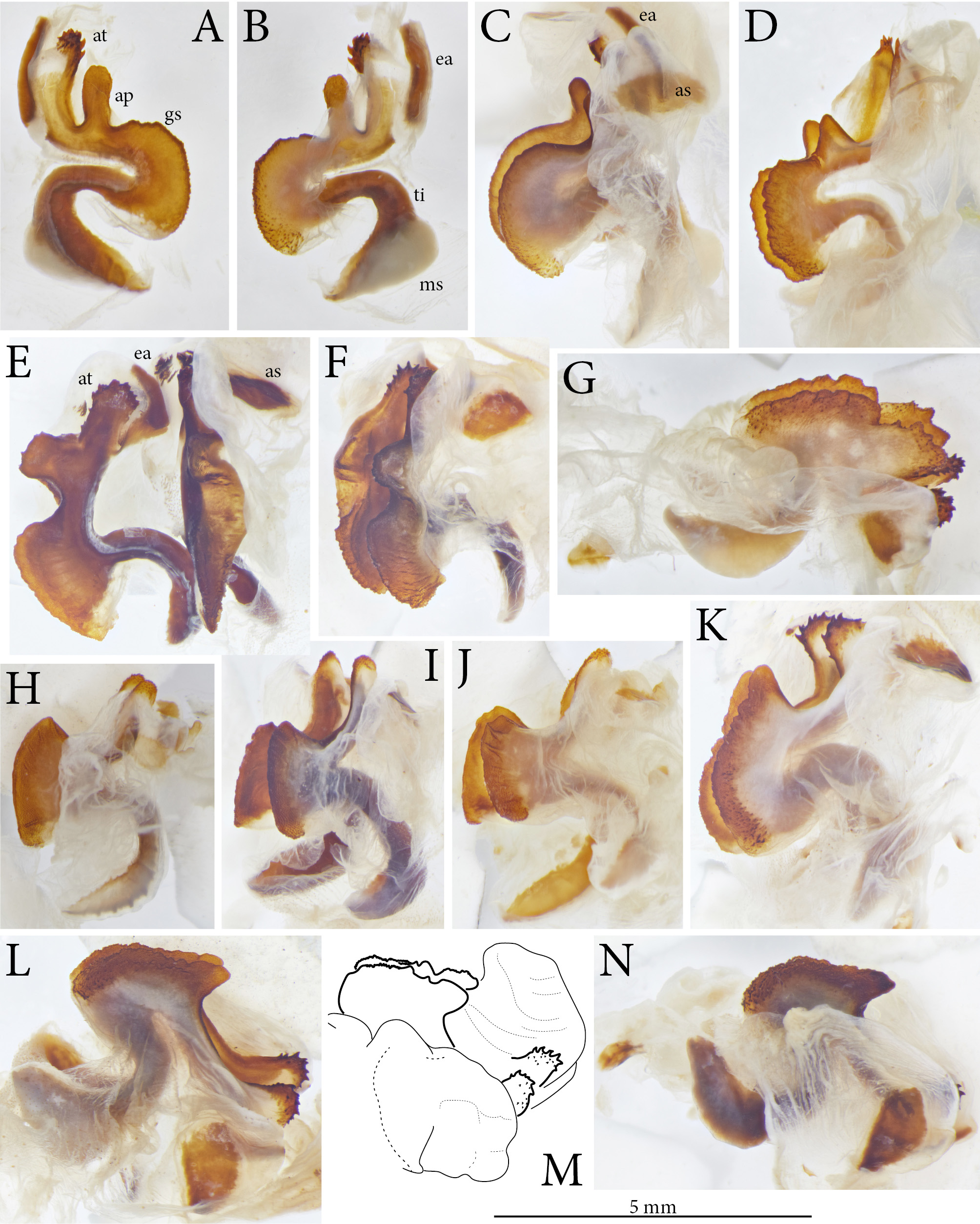