The syntype of H. dilutus  differs clearly from the syntype of C. discretus  , the lectotype of C. brevisetosus  , as well as specimens determined to be C. scabricollis  in by Eggers or Schedl, by the lack the mesofemoral spine ( Fig. 5View Fig), as well as the relative size of the pronotal disc (i.e., the pronotal summit is close to the base of the pronotum).The syntype of H. dilutus  does match the specimens labeled as ‘ C. ficus  ’ (manuscript name, Schedl collection, NHMW), as well as specimens from Malta, Tunisia, India, United Arab Emirates, Pakistan and specimens in this study from Mexico, Oman, Bangladesh, Italy, and Israel. The diagnostic characters identified from the males ( Table 2) are visible on the holotype. We also correct the reference for the description,

The two new primers were based on alignments across Scolytinae  , but was not reliable and only used for six samples.

which was published earlier in the same year. The second description is treated as a junior synonym, based on conclusions made by Beaver (1998) and Alonso-Zarazaga and Lyal (2009). Based on the observations above, the name H. dilutus ( Eichhoff 1878a)  is resurrected. We also note that all specimens, including the syntype, are much larger than originally described (‘1–1.3 mm’); the single remaining syntype is 1.67 mm, and non-type specimens range from 1.41 mm to 1.82 mm. 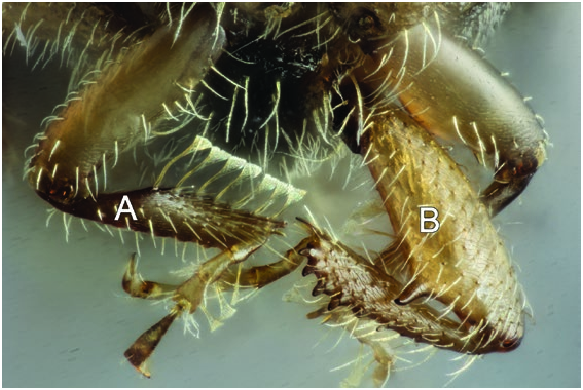 Fig. 5. The anterior face of the proleg and mesoleg of a male Hypocryphalus dilutus (specimen 21 on tree).The mesofemoral spine is a unique character of H. dilutus. (A) Protibia with spatula shaped setae. (B) Mesofemur with spine. Photograph taken at approx. 200× magnification.