Puparium. ( Fig. 4 View FIGURES 1–6. 1 ) Yellowish-brown to orange-brown; formed outside the mine.

Comments. The new species will key to the very similar Agromyza varifrons Coquillett in Spencer & Steyskal (1986)   , but the male cercus ( Figs. 228, 229 View FIGURES 225–229 ) is highly derived, being strongly widened apically and deeply cleft, with small, tubercle-like setae covering the inner surface. The dimensions, spacing and orientation of sclerites of the phallus also differ between the two. The length of the mesophallus and its sclerite is greater in the new species, the apical section of the basiphallus is narrower, and the distiphallus is directed distally (not dorsally) and wider apically.

The only Nearctic agromyzid previously reared from leaf mines on Celtis   is Agromyza varifrons   , and it is unclear how its mines differ from those of A. fission   , if at all. Spencer (1969) and Spencer & Stegmaier (1973) stated only that the larva of A. varifrons   forms a “conspicuous blotch mine”. Spencer & Steyskal (1986) illustrated the mine and referred to it as an “irregular linear blotch, most frequently following the leaf margin”. Most of the A. fission   mines we collected did not follow the leaf margin, but the shape was otherwise similar to that of the mine illustrated by Spencer & Steyskal (1986). We therefore question the reliability of the records of A. varifrons   from Quebec, Arkansas, and Mississippi that are based only on empty leaf mines ( Spencer 1969; Spencer & Steyskal 1986). Spencer & Steyskal (1986) mentioned an empty leaf mine found in Arkansas that “can scarcely be associated with A. varifrons   . It is a more regular blotch toward the center of the leaf blade and possibly represents an undescribed species.” We have found such mines, without a trace of a linear portion, on Celtis laevigata Willd.   in Florida and North Carolina and on C. occidentalis   in Connecticut, Oklahoma, and Vermont. 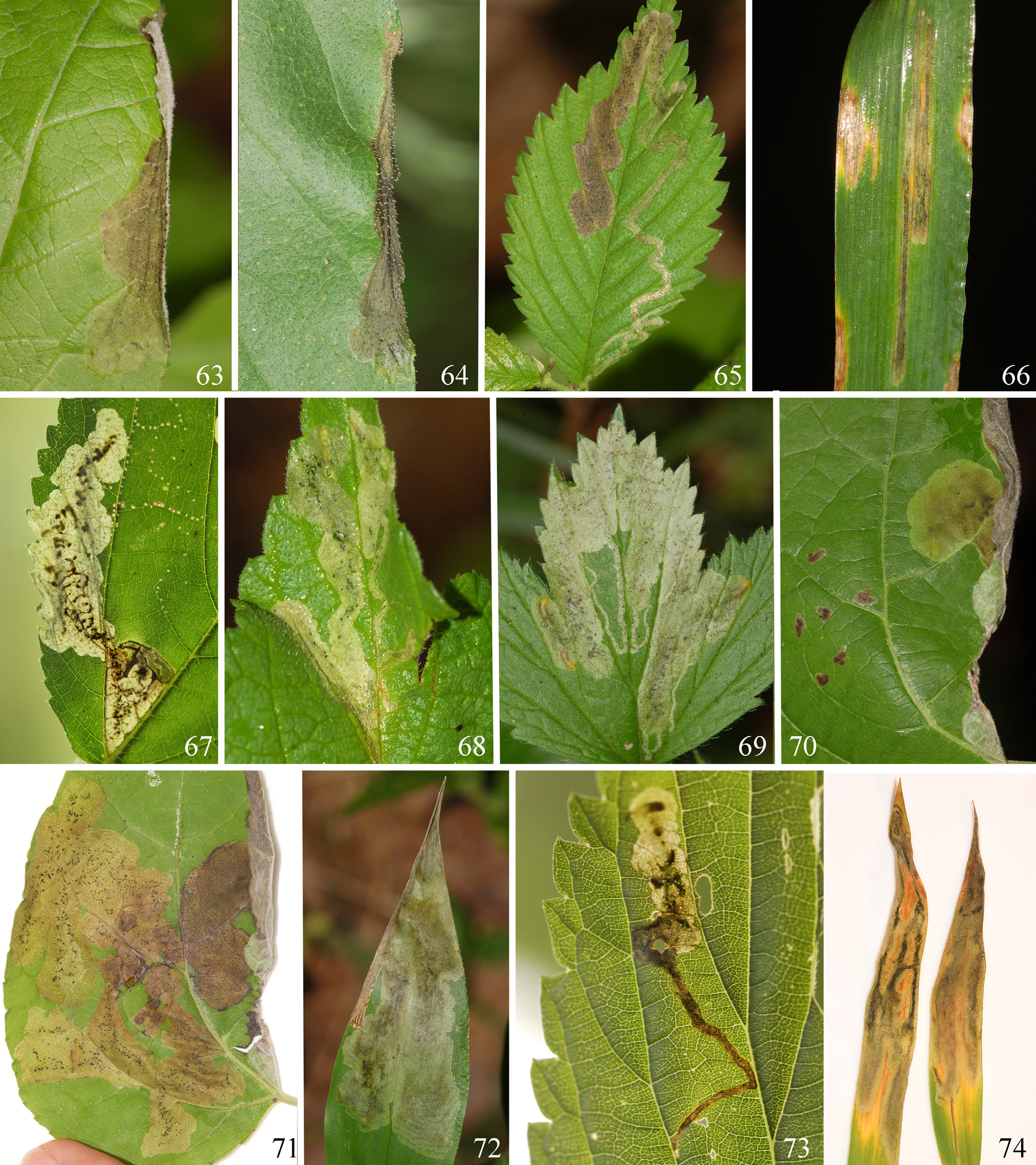 FIGURES 63–74. leaf mines; 63: Agromyza albitarsis Meigen in Populus balsamifera; 64: A. ambrosivora Spencer in Helianthus annuus; 65: A. aristata Malloch in Ulmus rubra; 66: A. bispinata Spencer in Elymus hystrix; 67: A. diversa Johnson in Laportea canadensis; 68: A. fission spec. nov. in Celtis occidentalis; 69: A. idaeiana Hardy in Geum macrophyllum; 70: A. isolata Malloch in Populus balsamifera, young mines (left) with probable A albitarsis mine at leaf margin; 71: same Populus balsamifera leaf with completed mines, A. isolata to left of midrib and probable A. albitarsis to right; 72: A. parca Spencer in Dichanthelium clandestinum; 73: A. pseudoreptans Nowakowski in Urtica dioica; 74: A. pudica in Dichanthelium scoparium.