Etymology. This species is named for Michael W. Palmer, botanist, who collected the type series as well as a number of other specimens used in this study.

Leaf mine. ( Fig. 196 View FIGURES 189–199 ) Upper surface, gradually widening, at least sometimes linear throughout, but often contorted to form a secondary blotch. The black frass is in closely spaced grains or beaded strips, allowing the larva’s path to be traced even when the mine forms a nearly continuous blotch.

Puparium. Brown; formed within the mine, its anterior spiracles projecting ventrally through the upper epidermis.

Comments. Three other Nearctic Phytomyza   species are known to mine leaves of Symphoricarpos   , all in the periclymeni superspecies. Their mines are discussed below under Phytomyza   sp. 4. These and other Caprifoliaceaemining species are best treated in Griffiths (1974a) as part of the genus Chromatomyia   , where examination of the male genitalia is almost always required for species diagnosis. The hypophallus is usually present in the Caprifoliaceae-mining Phytomyza   , at least as a small vestigial sclerite (e.g. P. alpigenae Hendel   ), but it is absent in three known species— P. palmeri   on Symphoricarpos   and P. sempervirentis   on Lonicera   , both newly described here, and P. nigrilineata (Griffiths)   , also on Lonicera   (a minute hypophallus sclerite is erroneously depicted in the original description).

Phytomyza palmeri   can be differentiated from the above by a wing length of 1.7–1.9mm (♂) and 1.9– 2.2mm (♀), a narrower gena, a light yellow frons, a mostly white postpronotum, extensive yellow markings on the fore and mid femora, a short basiphallus and a distiphallus that is stouter and wider with distal annulations ( Figs. 346, 347 View FIGURES 343–347 ). Phytomyza sempervirentis   is larger (wing length 2.1–2.2(♂) and 2.2–2.4mm (♀ )), only the apex of the fore femur is yellow, and it has a higher gena, a brown frons, a brown postpronotum, a longer paler basiphallus and a more gracile distiphallus with one pair of lateromedial lobes ( Figs. 356-359 View FIGURES 353–359 ). Phytomyza nigrilineata   is nearly identical to P. sempervirentis   , but in the former there is yellowish mottling around the postpronotum, all femora are widely yellow apically (not just the fore femur), the distiphallus appears to have shorter, narrower distal arms with a darker accessory laterobasal process, and the single basal process of the distiphallus is stouter and as long as the distal section (based on the illustration in the original description, as the genitalia are now permanently embedded and only visible laterally).

The leaf mine most similar to that of Phytomyza palmeri   is apparently that of P. caprifoliae Spencer   , but based on Griffiths’ (1974a) description and illustration for that species, P. palmeri   seems to have a more distinctly linear mine. It may not always be possible to distinguish the two should they prove to be sympatric. 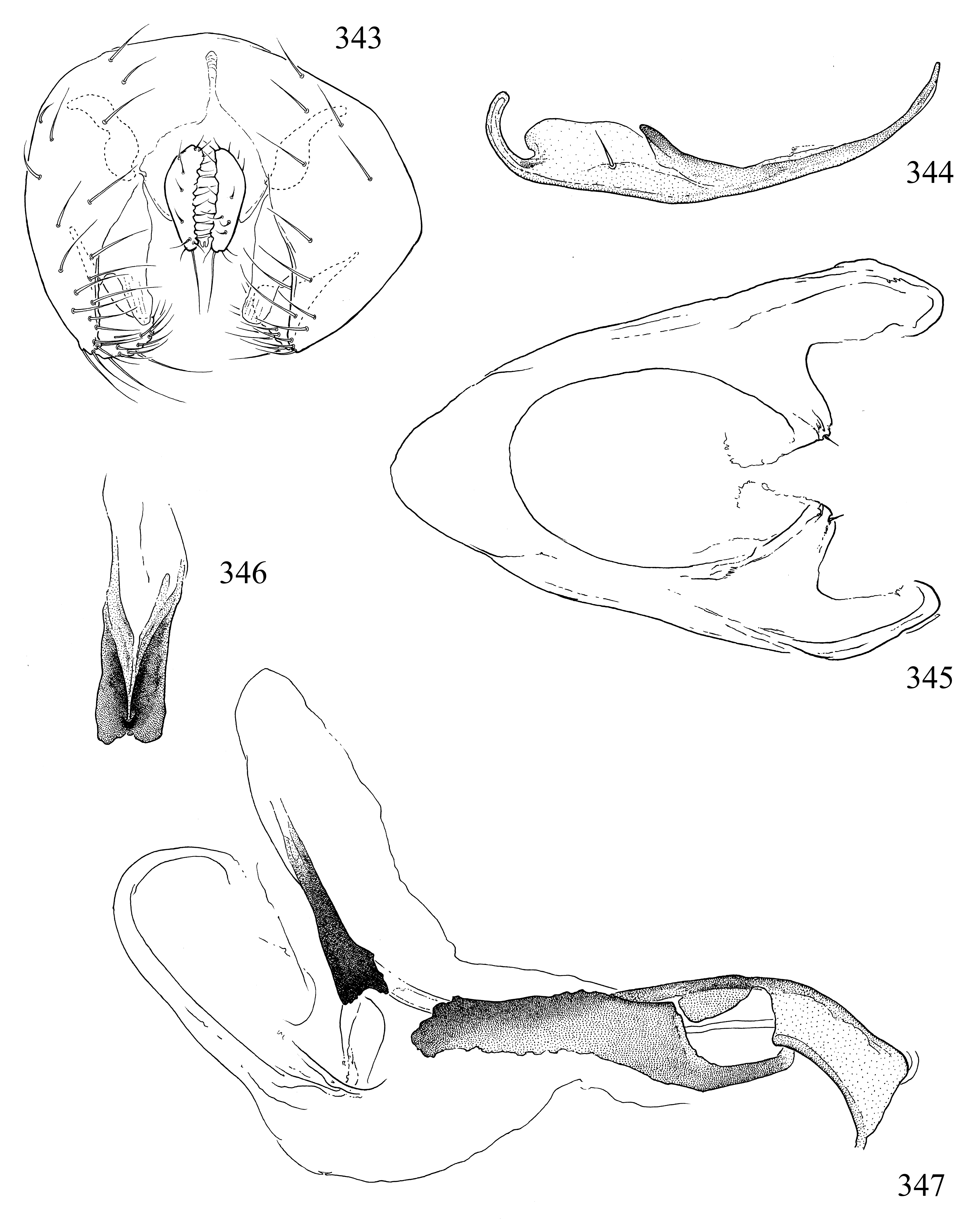