Elytra slightly wider than pronotum and at suture approximately 0.8 times as long as pronotum; puncturation fine and dense, more distinct than that of pronotum; microsculpture indistinct; surface with more shine than pronotum. Hind wings of somewhat reduced length, but longer than elytra (in those specimens whose hind wings were examined). Legs moderately slender; metatarsomere I long, longer than combined length of metatarsomeres II-IV.

E t y m o l o g y: The name (Lat., adj.) is derived from the name of the mountain range, where the type localities are situated.

C o m p a r a t i v e n o t e s: From the similar O. abdominalis   and O. kartabensis   , the species is distinguished especially by the morphology of the primary sexual characters (large crista apicalis, shape of ventral process of aedeagus, shape of spermatheca). From the former, it is additionally separated by the more distinctly punctate pronotum, the somewhat more massive antennae, the slightly smaller eyes, and the usually less distinctly bicoloured body. From the latter, it is also distinguished by the slightly smaller eyes, the shorter elytra, and the shorter hind wings.

D i s t r i b u t i o n a n d b i o n o m i c s: The species is currently known only from the Ziyaret Dağı in southern Antakya province, central southern Anatolia, not far from the Syrian border ( Map 1 View Map 1 ). The types were sifted from the litter of shrubs (oak, laurel) at an altitude of 760- 930 m. Three specimens collected in the beginning of April are teneral. 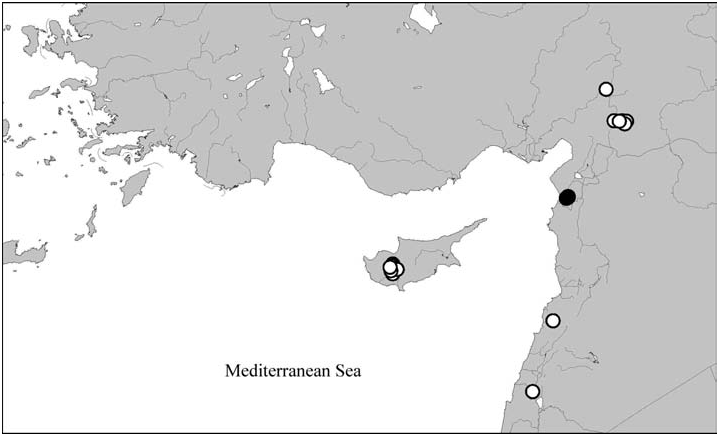