Neotype designation and description (male) ( Figure 11 View FIGURE 11 ). Designation. According to the Article 75.3. of the Code ( ICZN, 1999) there must be an exact statement why neotype is designated. There is also a set of rules in designating neotype: Articles (75.3.) 75.3.1.–75.3.7. The statements that correspond to each article follow. Corresponding statement to the Article 75.3. of the Code ( ICZN, 1999) the neotype is designated: The neotype of the species Bicolorana kraussi ( Padewieth, 1900)   is designated because of at least 4 reasons: (i) more than a century old problem concerning the identity of B. kraussi   [ Platycleis kraussi   ] exists. A lot of authors tried to solve this matter in the past, but with no results. Without the type specimen the problem cannot be solved because (ii) as it is stated in Diagnosis, B. kraussi   is very similar to B. bicolor   and there are also some localities where these two species occur syntopically (see Distribution), (iii) there is a possibility of the presence of more cryptic taxa similar to B. kraussi   (such as B. burri (Uvarov, 1921 ))   and (iv) this species is a member of the tribe Platycleidini   (with unarmed prosternum) id est of Metrioptera-Platycleis group, which is taxonomically not resolved and put into order yet. In order to make exhaustive revision of these problematic groups, type material of this species is crucial for further genetic and taxonomical studies. Corresponding statement to the Article 75.3.1.: The type locality of the species is Francikovac near Veljun Primorski [N 45.003565, E 14.951034 601 m a.s.l., wet meadow by the road]. The locality is the closest one to Sveti Križ /near Senj (the former type locality) on which the species has been found. The population from Francikovac fits the original description by Padewieth (1900). Corresponding statement to the Article 75.3.2.: See Diagnosis, Neotype description, Female description, Male description, and Morphometrics. Corresponding statement to the Article 75.3.3.: Velika Kapela Mt.: 1 ♂ NEOTYPUS 26.VIII. 2014. Francikovac (type locality) leg. J. Skejo, N. Tvrtković & F. Rebrina, see Neotype description with associated photos. Corresponding statement to the Article 75.3.4.: A part of Padewieth’s collection is present in the Croatian Natural History Museum, but there are no specimens of B. kraussi   [ P. kraussi   ] (see 3 rd paragraph of Introduction). There is no Padewieth’s Orthoptera   material in Zagreb, Varaždin, Rijeka or Zadar Museums. Also, the material is not deposited in any of the European museums with orthopterological tradition and none of the former authors who dealt with this matter traced the type series. In the original description Padewieth did not specify where he had deposited the type material. Since there is no evidence that the type material still exists, we believe that it has been lost or destroyed.

Corresponding statement to the Article 75.3.5.: The neotype fully fits the original description and is collected on the locality very close to the former type locality. Corresponding statement to the Article 75.3.6.: See Study area, Figure 12 View FIGURE 12 ., Corresponding statement to the Article 75.3. 1. and Article 75.3. 5. Corresponding statement to the Article 75.3.7.: The neotype is deposited in Orthoptera   collection in the Museum in Leiden (Naturalis Biodiversity Center), the Netherlands. The neotype is properly preserved, which is assured by the curators of the Museum. The neotype is accessible for study. Description. ( Figure 11 View FIGURE 11 ) The neotype is preserved in a bottle filled with 96 % ethyl alcohol. The specimen is in good condition. Body colour is brown-yellowish. It has a white stripe on the vertex and in the median area of the pronotum. There are also two whitish stripes on the lateral keels of the pronotum. Fastigium is noticeably wider than scapus and trapezoidal. Scapus is situated near the upper inner margin of the compound eyes. Antennae slightly surpass cerci and are not broken. Discus of pronotum with rounded posterior margin. Paranota little longer than high. Femora of all legs coloured more brightly than tibiae and tarsi. There is a very dark longitudinal stripe on the outer margin of the hind femora. Tergite dorsal area is darker than lateral and is bearing grey-brownish spots and marks. All the sternites are bright yellow. Tegmina reaching 5 th and 6 th tergite. Tegmina have dark markings (spots, triangles and squares). Radius and Media are lighter (more yellowish) than other veins. Projections of the X th tergite are spine-like and their length is 1 / 3 of the tergite length. Cerci are long and thin, with inner tooth distally. Cerci are light brown, with a distal 1 / 3 coloured dark brown. There is also a light stripe between cercus and its tooth. Subgenital plate is trapezoidal in general appearance and with triangular excision distally and bearing relatively long styli. Titillators of neotype not isolated, but can be seen from behind. Titillators long and thin, basis wider than the other parts, 1 / 3 of the apical part perpendicular to the other parts. Basis of the titillators curved upwards and prolonged perpendicular to apical part.

Etymology. Padewieth (1900) dedicated the species to his friend, Dr. Herman August Krauss, epitheton is genitive singular according to the second Latin declension (-us declension), thence kraussi   .

Distribution and ecological characteristics. The distribution range of Bicolorana kraussi   , known from 16 papers (see Taxononomical and nomenclatural part), was extended by our research in Slovenia and Croatia ( Figure 12 View FIGURE 12 , Appendix 1). Species is a local European endemic and inhabits restricted karst area in NE Italy (Friuli-Venezia Giulia: Prealpe Carniche and Carso Triestino), SW Slovenia (along Kras and Kraški rob /karst border/ from Soča River /ital. Isonzo/ to Gorski kotar in Croatia: south-western slopes of Trnovski gozd, Nanos Mt. and Snežnik Mt.), and from Slovenian Slavnik Mt. along Croatian Ćićarija Mt. ridge to Učka Mt. (W Croatia: Istria). The southernmost distribution borders are on southern slopes of Risnjak Mt., and along coastal slopes of Velika Kapela Mt. to N part of Velebit Mt. According to Mikšić (1968, 1976a, 1976 b, 1978) the species is present in S Bosnia and Herzegovina as well (Dinaric Alps: Cincar-Hrbljine, Šator Mt., Čvrsnica Mt-Donje Bare): this potential southeastern part of the species distribution is in question because the identification has never been confirmed (see below). Altitudinal range of B. kraussi   (85 localities in total) is on warm slopes of karst mountains with maritime influences from 85 to 1390 m a.s.l., but 70 % of findings are between 500 and 1000 m a.s.l., respectively with the most of the findings at 800 m a.s.l.

Localities of B. kraussi   in the central part of the Southern Europe represent a place where southern European range of the Palearctic B. bicolor   and northern range of Mediterranenan M. modesta   overlap. B. kraussi   sometimes shares habitat with M. modesta   , but sympatric populations with B. bicolor   are almost always in different habitat types (microhabitats). Only in some places they are directly in contact. Nadig (1987) found in Italy B. kraussi   on Mt. Cavallo slopes from 1100 to 500 m a.s.l., and B. bicolor   in lowland from 500 to 410 m a.s.l. On the foot of the Mt. Jouf near Maniago he found both species between 400 and 500 m a.s.l., but on different localities. In Slovenia near Senožeče he found B. kraussi   at 500 m a.s.l., and B. bicolor   from 500 to 410 m a.s.l. In Slovenia SG found syntopically both species only at the top of Nanos Mt. and Slavnik Mt., where different habitat types can be found in a short distances. Here B. bicolor   prefers humid habitats, usually with higher grasses. In Croatia JS, NT and FR have never found both species together in the same locality and habitat. Of 38 findings of imagines of B. bicolor   in a sympatric area, they were present from June 8 th to October 6 th with a maximum in the first ten days of August. The earliest of 43 findings of imagines of B. kraussi   is not earlier than July 14 th, the latest being on October 17 th, and majority of findings in the last ten days of August. These data are not results of methodical research, and they are only an indication of probably different phenology in the joint distribution part.

Bicolorana kraussi   inhabits different types of dry meadows (what is contrary to the note in the original description) or forest clearings with dense tall grasses and other plants where hidden males are singing. Grasslands are of diverse types, but mostly inside the group with Winter savory ( Satureja montana   ) or Villous viper’s grass ( Scorzonera villosa   ) communities. This type of grasslands is present in the area with Littoral beech forests of autumn moor grass (Seslerio autumnalis-Fagetum), Mixed forest of pubescent oak and hop hornbeam (Ostryo- Quercetum pubescentis) and Mixed forests of black pine and hop hornbeam (Ostryo-Pinetum nigrae). They are common in the north-eastern part of Adriatic Sea in the uppermost Submediterranean belt, border zone of Mediterranean and Continental region ( Horvatić 1963, Bertović 1975). Along Monti del Carso (Slovenian: Kras) near Trieste this type of grassland vegetation is found at the lowest elevation, being nearly at the sea level. These are dry-grassland types, but in the area with relatively high yearly precipitation ( Bertović 1975: mean amount of rainfall 1065–1665 mm per year) and strong cold northern wind bora. Forest fringes are occupied by other bush cricket species.

B. bicolor   prefers mesohygrophilous and dry but more continental habitats, or some wet planar area in Mediterranean region including Istria and some north Adriatic islands (SG unpublished data). M. modesta   prefers Mediterranean diverse dry meadows without dense grasses. On the new locus typicus (Francikovac), we found B. kraussi   syntopically with some M. modesta   specimens: populations of this species are dense on lower altitudes in areas without B. kraussi   . Roeseliana roeselii   preferring wet and humid meadows, P. kraussi   and M. modesta   prefer dry Mediterranean grasslands. However, there are some localities, such as Francikovac, where all of these three species co-exist. 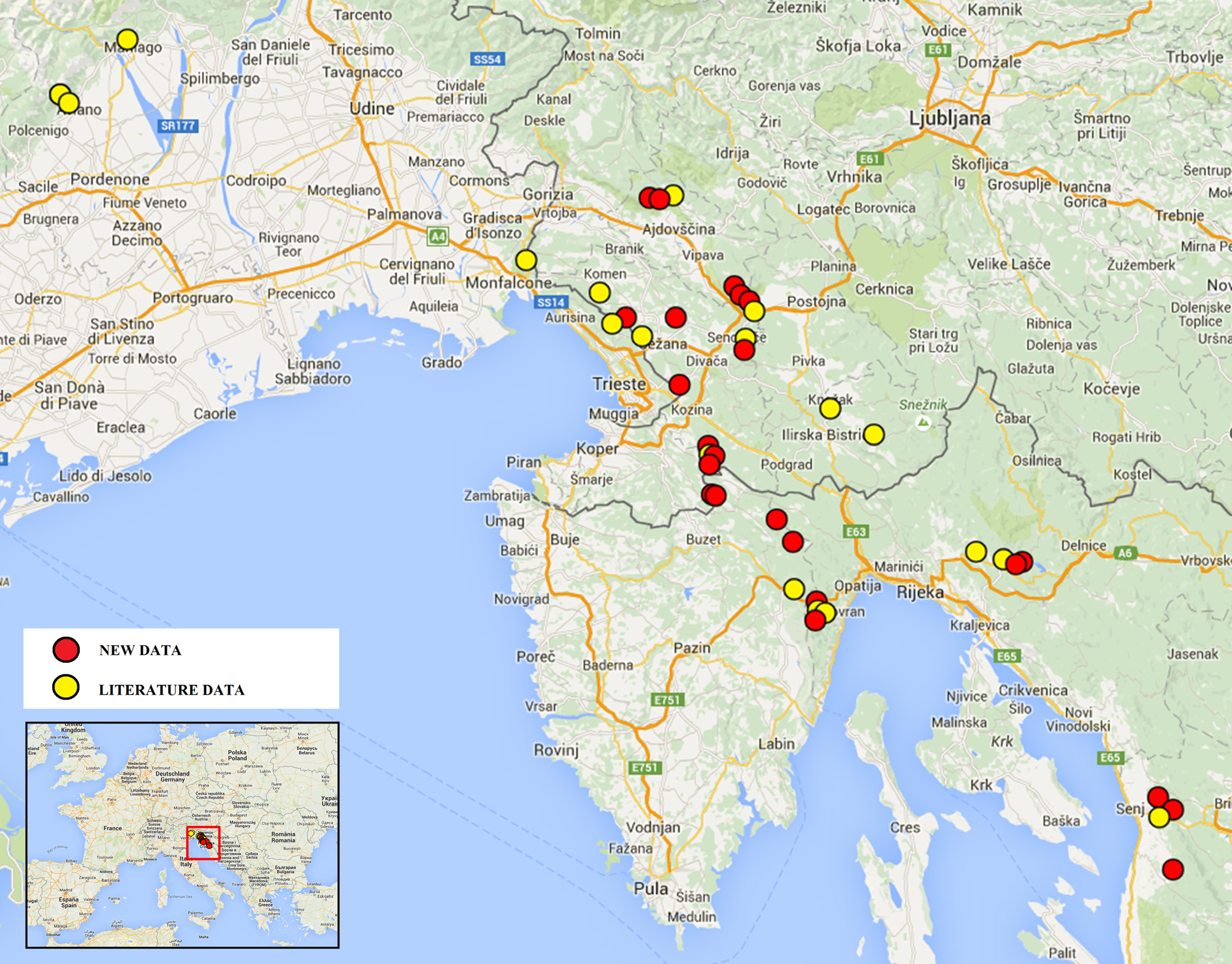