Comments. The species here described as a new genus does not run well to any genus or runs to a genus to which it does not belong in the keys to genera given by Tachikawa (1963, Japanese genera), Prinsloo & Annecke (1979,Afrotropical), Noyes (1980, Neotropical), Trjapitzin (1989, Palaearctic), Noyes & Hayat (1984, Indo- Pacific), Noyes et al. (1997, Nearctic), and Hayat (2006, Indian). It runs to Pararhopella Girault   in the key to the genera of Indo-Pacific Encyrtidae   by Noyes & Hayat (1984), and to Zaommoencyrtus Girault   in the key to Nearctic Encyrtidae   by Noyes et al. (1997). However, the species is totally different from species in any of these genera. Noyes observed (pers. com.) that it is an interesting species belonging near Zaommoencyrtus Girault   , stating “ ….I checked Zaommoencyrtus submicans   and there is no filamentous strip between the gonostylus and second valvifer, the head shape is different and so is the venation….”. I (SS) also obtained identified material of Z. submicans Girault   on loan from BNMH and found it a totally different genus with the following important basic differences (characters in brackets are those of Zaommoencyrtus   ): head convex, hypognathos (flattened, prognathos); head clearly longer than wide (slightly wider); occipital margin sharp (rounded); greatest length of eye more than minimum width of frontovertex – 1.31 × (equal or shorter); eye longer than malar space (shorter); funicle 5 - segmented (6 -segmented); club 2 -segmented (3 -segmented); wings bare at basal third (setose); parastigma and stigmal veins greatly swollen (not so); ovipositor with III-valvulae long and with filamentous attachment (IIIvalvulae not so); hypopygium reaching beyond apex of metasoma (reaching two-thirds length of metasoma). Hayat (pers. com.) observed that the species is unique and resembles the genus Acerophagoides Blanchard   , and it runs to that genus in the key to the Costa Rican genera of the subfamily Tetracneminae   by Noyes (2000). Noyes (pers. com.) on placement of Acerophagoides   in Tetracneminae   observed “… I am not entirely convinced that Acerophagoides   is a tetracnemine. Although it superficially looks really close to Coccidoxenoides   [Girault] there are some morphological peculiarities that suggest it may not be closely related and that might place it within the Encyrtinae   .”

The new genus differs from Acerophagoides   in the following characters (characters given in bracket are those of Acerophagoides   ): head, in frontal view, distinctly elongate, 1.3 × as high as wide (head, in frontal view, round or slightly wider than high); clava 2 -segmented (3 -segmented); maxillary and labial palpi 4 - and 3 -segmented, respectively (maxillary and labial palpi 2 -segmented); pronotum dorsally about one-fifth as long as mesoscutum (pronotum dorsally very short); notaular lines absent (notaular lines present, though not reaching half way to posterior margin); fore wing completely bare behind submarginal vein except for three or four small setae just behind middle of submarginal vein (fore wing setose below submarginal vein); filum spinosum composed of two rows of spines (filum spinosum with one row of spines); host is some insect associated with the fruiting body of wood decaying fungus (hosts are Eriococcidae   and Pseudococcidae   ). 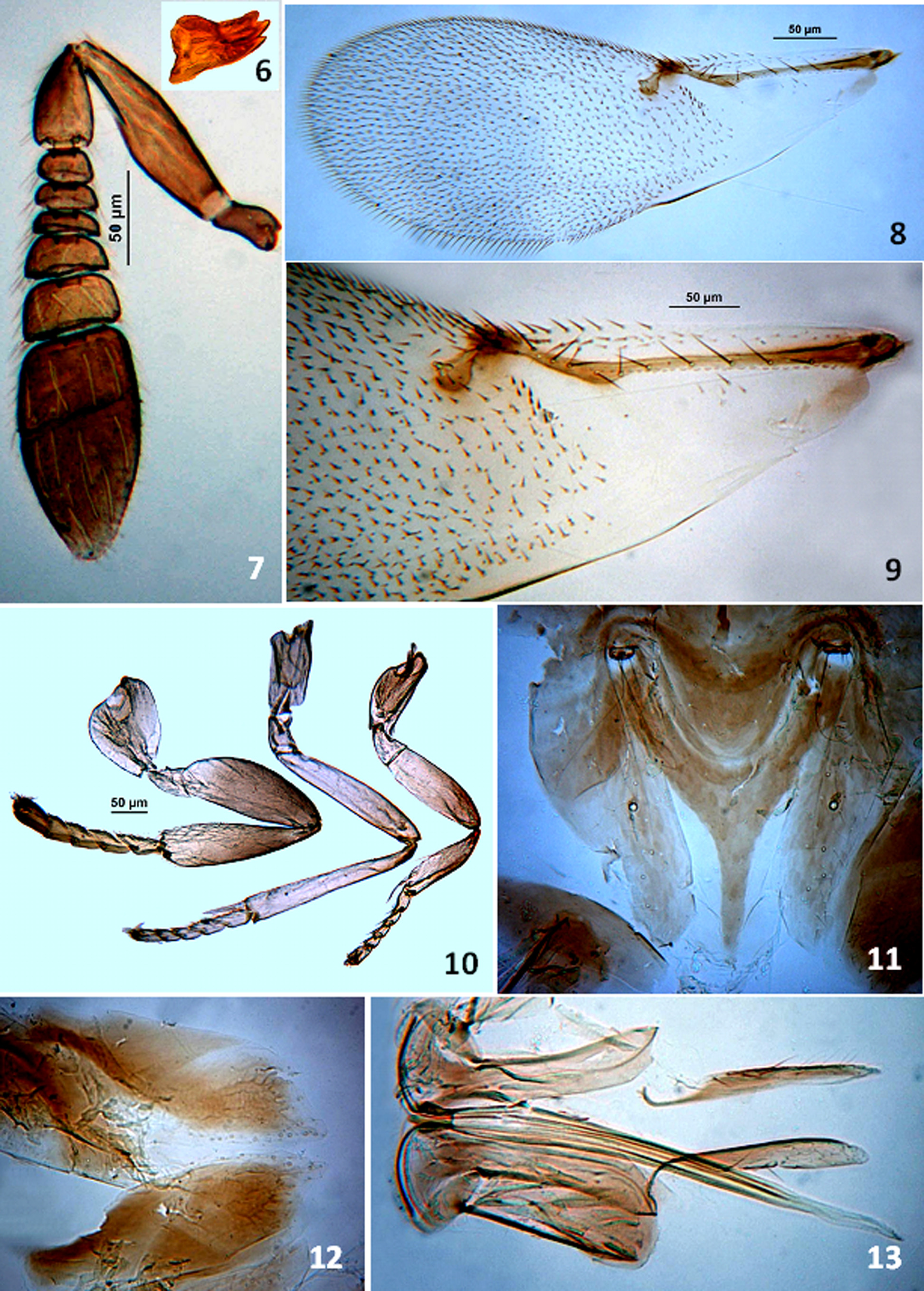