Description. Stems monosiphonic, scarcely branched, up to 9 mm high, arising from creeping, branching hydrorhiza. A constriction above origin from stolon, then stem broken up into slightly geniculate to almost collinear internodes, each of which of moderate length, with bulges at both ends, and a latero-distal hydrophore supporting a terminal hydrotheca ( Fig. 2 View FIGURE 2. A, B E1, 3). Hydrophores long, with a pseudodiaphragm on adaxial side; hydrotheca deep, with everted margin; renovations common ( Fig. 2 View FIGURE 2. A, B F). Side branches, when present, given off singly from the primary hydrophores ( Fig. 2 View FIGURE 2. A, B E 2); structure identical to the stem. Gonothecae arising from the primary hydrophores, from within the primary hydrotheca, or as a replacement of it, as well as from the stolon. Female laterally flattened, broadly ovoid in frontal view, tapering abruptly below into short pedicel; distally there are two lateral, earlike outgrows, in the middle of which there is a circular, notched aperture (Fig. 3 D 1–3). Male gonothecae ovoid, borne of short pedicel (Fig. 3 D 4). Cnidome ( Fig. 4 C View FIGURE 4. A ‒ F, M ): small heteronemes [(3.1–3.4) × 1.7 µm], microbasic mastigophores [(5.7 –6.0) × 1.7 µm], and conspicuously curved heteronemes [(8.3–9.2) × 2.3 µm].

Remarks. Male and female stems are found together on the same substrate, a barnacle, but, since the latter is overgrown with an encrusting bryozoan, it is impossible to check whether the same stolon unites stems of both sexes.

The female gonotheca of H. humeriformis   resembles that of the South African material assigned by Millard (1957) to a new variety, magnum, of H. parvulum   12 Bale, 1888. However, her material has much larger dimensions compared to ours. It seems therefore justifiable, as already remarked by Schuchert (2005, p. 630), to raise this variety to species, as H. magnum Millard, 1957.

The cnidome of the new species includes a peculiar, large, banana-shaped heteroneme ( Fig. 4 C View FIGURE 4. A ‒ F, M ), and therefore differs from the homologous capsules found in the other species described herein. It will be shown below that another congener, H. tristaniensis   sp. nov., possesses an unusual capsule, too, suggesting that the knowledge of the cnidome in haleciids may represent a useful tool for discriminating between the species.

Etymology. The specific name is a fusion between two Latin words, viz. humerus (pl. -i), meaning shoulder(s), and forma (meaning shape), making reference to the latero-distal diverticles of the female gonotheca.

Distribution in Chile. Only known from Taltal (present record). 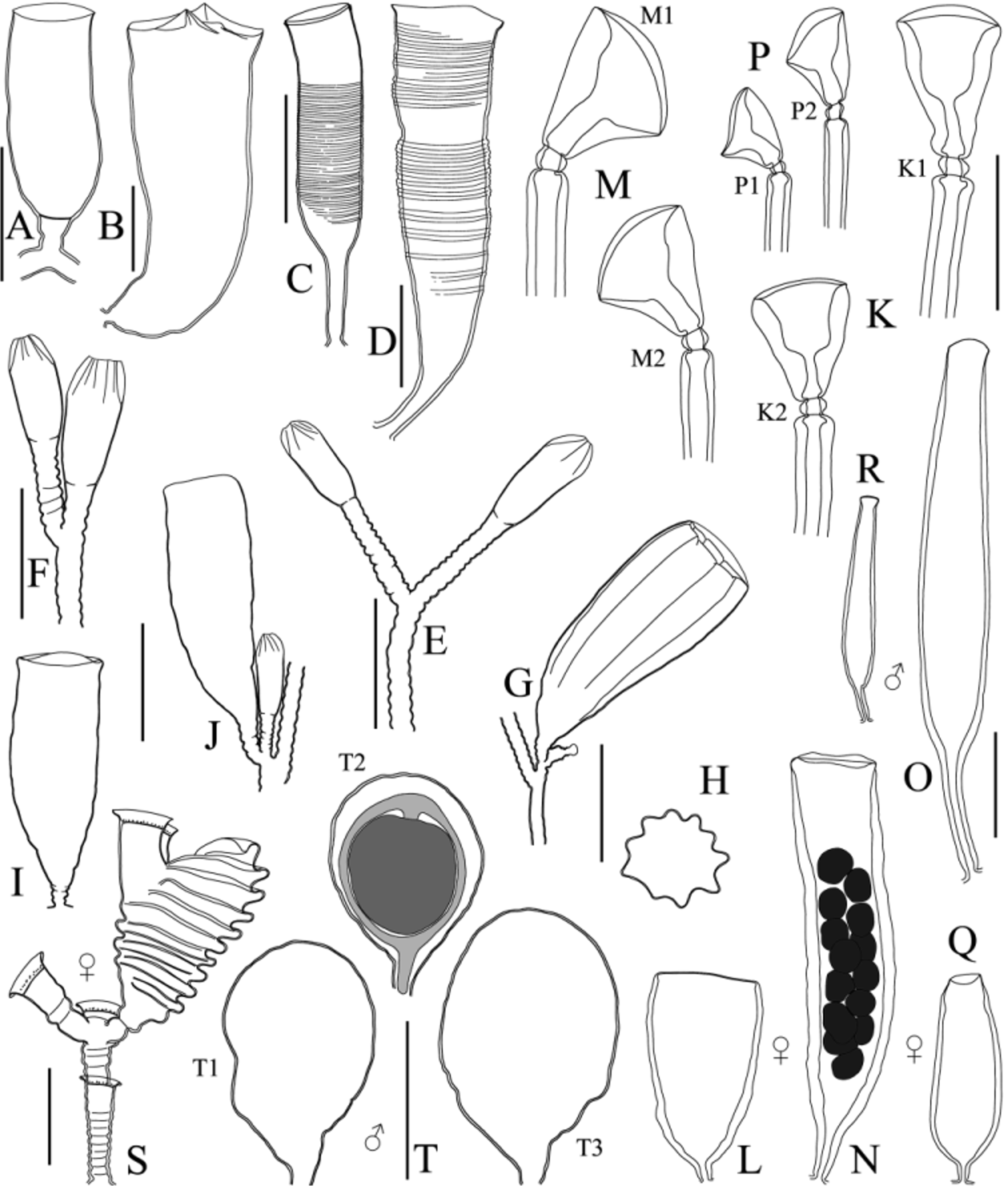 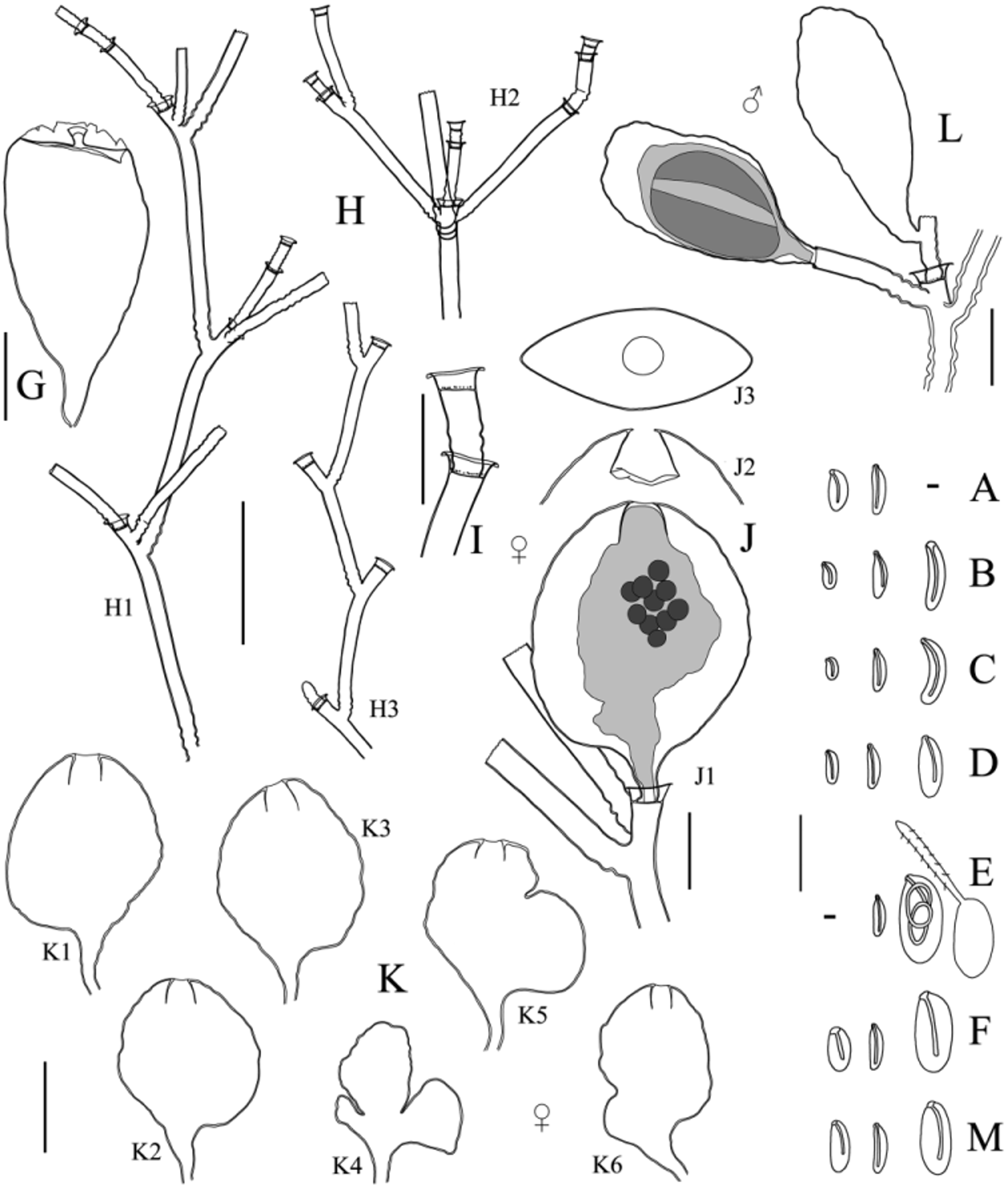