Description. Small cone shaped sponge; holotype 21 × 15 mm in diameter and 6 mm height; paratype 18 × 12 mm in diameter, 8 mm height, with an apical oscule 5 mm diameter ( Fig. 6a View FIGURE 6 ). Color white when alive, light beige in alcohol. Surface smooth in parts, microhispid in others, with protruded spicules ca. 0.3 mm outside the surface, showing a punctate appearance despite of its small size. In addition, it is pierced with minute pores all over the surface, ca. 1.0 mm in diameter. Consistency soft, crumbly, fragile. The internal structure is filled here and there by obscured spherical cells or granules 75‒100 µm in diameter ( Fig. 6c View FIGURE 6 ), which are a characteristic feature of the genus.

Etymology. The species is named after Germán Yáñez, one of the first cave divers in Mexico, in recognition of his work in the exploration of terrestrial and underwater caves; and also, for his support during the diving in the anchialine cave La Quebrada.

Ecology. This is a stygobite species found at 5.6 m depth.

Remarks. This is the only Svenzea species living inside an anchialine cave up to now, whilst the other 4 species living in the Tropical West Atlantic region are inhabitants of coral reefs or mangroves. Svenzea germanyanezi sp. nov. is distinguished by its unique cone shape or volcanic shape, even depicted by its small size, color white, and has mainly oxeas and strongyles. Other Svenzea spp. are characterized by distinct features: 1) S. tubulosa is a tubular sponge, beige in color, and has smaller sizes of just styles: 310‒395 × 12‒15 µm ( Alcolado & Gotera 1986 as Dragmacidon tubulosa ). 2) S. zeai is massive or thickly encrusting, purple brown in color, and has smaller spicule sizes with styles 205‒290 × 7‒12.5 µm, and oxeas 210‒330 × 7‒12.5 µm ( Alvarez et al. 1998 as Pseudaxinella zeai ). 3) S. cristinae has a thickly encrusting body, brown-yellowish color with purple or brown-pinkish areas, mainly with style spicules 310‒460 × 4.2‒17.5 µm ( Alvarez et al. 2002). 4) S. flava is massive shaped with cavernous body, yellow color when alive, with only styloid spicules (strongyles): 244‒380 × 2‒11 µm ( Lehnert & van Soest 1998 as Pseudaxinella flava ). The new species possesses all the features of the genus, including the presence of granular cells, no ectosomal skeleton, and a choanosomal formed by uni- or paucispicular reticulation. 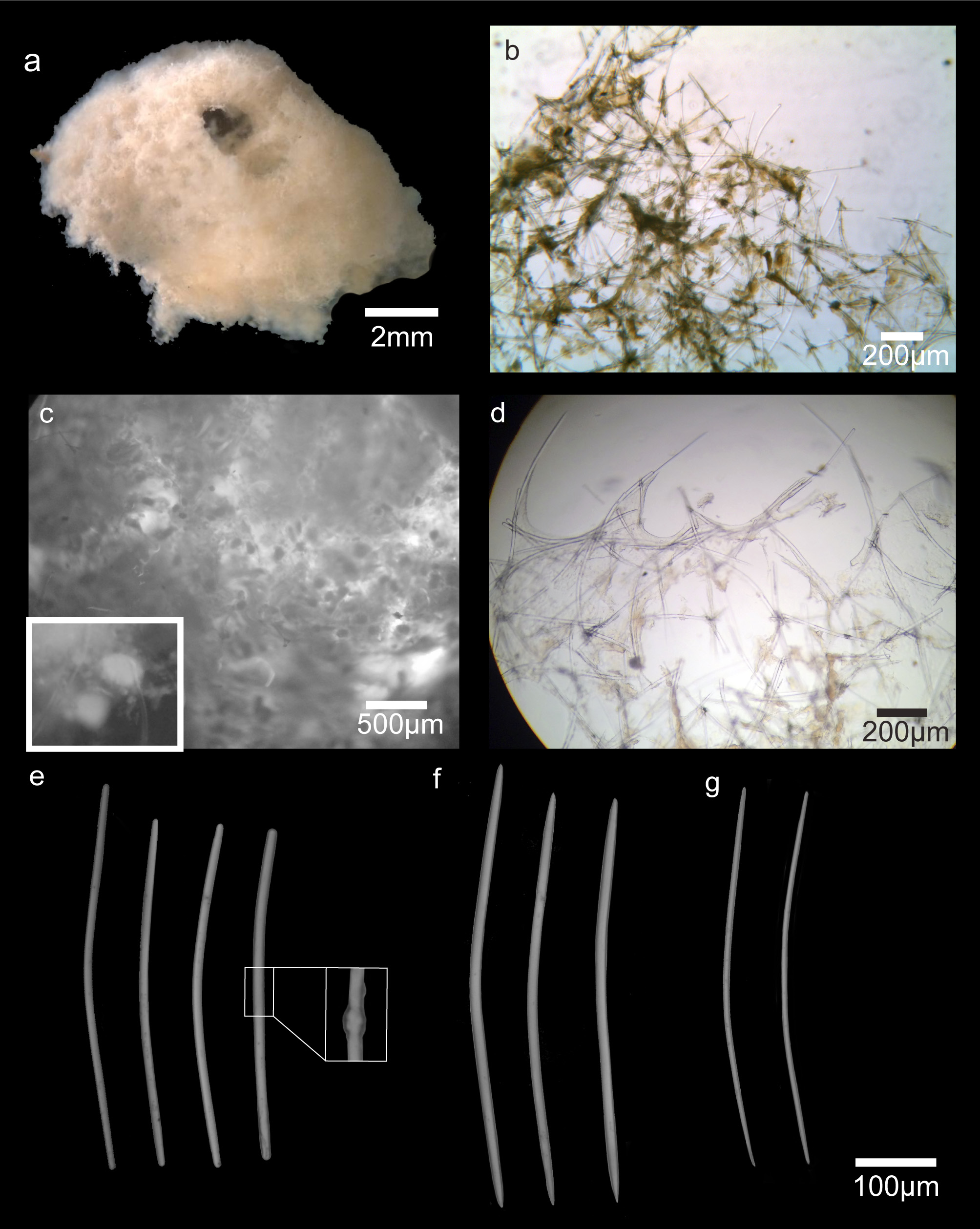