Description. Specimen from Porto Santo (AM W.49213) almost complete, measuring 38 mm in length for 82 chaetigers, 1.7 mm in width; specimens from Gran Canaria (AM W.49214 / MNCN 16.01/17816) 11 and 9 mm for 17 and 25 chaetigers, width 2.5 and 0.7 mm. Ethanol stored specimens overall cream-coloured to very pale brown with more brown pigmentation at anterior part of prostomium, ceratophores, proximal and part of ceratostyles (figs 7A–C); some specimens with lateral segmental spots near bases of parapodia, when best developed, appearing as vertical stripe next to parapodia ( Fig. 7 View FIGURE 7 A).

Remarks. Diopatra madeirensis was described on the basis of one incomplete specimen measuring 1 cm in length for 35 segments and six juveniles consisting of 31–35 chaetigers of which at least some were complete specimens, collected one year later. The larger specimen was described as having quite long antennae (lateral antenna to chaetiger 4), peristomial cirri, branchiae from chaetiger 4, longer than the width of the body with a delicate stem and 12–15 spirally arranged delicate, long filaments. The spiraled branchiae were present only until chaetiger 13, consisted of one filament on chaetiger 14–15, and were absent from chaetiger 16. The pseudocompound hooks were illustrated as having a relatively short appendage, being bidentate with a long distal tooth and pointed hoods ( Langerhans, 1880: pl 15, fig 25), present on the first four chaetigers; subacicular hooks started from chaetiger 9. The maxillary formula was given as: MxI = 1+1; MxII = 15+12; MxIII = 17+0; MxIV = 10+12. In our experience the values for the left MxII and MxIII are atypical for the genus and can only be explained as an abnormality or an erroneous observation.

This specimen was obviously also not fully grown as demonstrated by the early origin of the subacicular hooks and the relatively short extent of the branchiae. Langerhans considered the six smaller juveniles to belong to the same species as they agreed in the form and distribution of the chaetae, except that in one specimen the pseudocompound hooks were present only on three parapodia, the first branchiae were always on chaetiger 5, developed well only on two chaetigers, absent from chaetiger 10, and peristomial cirri were absent.

We have examined photographs of the only existing type specimen (NHMW 2296). It is a slide preparation of a specimen measuring 6 mm in length, 0.5 mm in width without parapodia, consisting of at least 25 chaetigers. The first branchiae start on chaetiger 5, consist of a slender stem with long slender filaments, with the branchiae of chaetiger 6 being about half as long and the next consisting only of a few filaments. The protomandibles take up almost half the size of the mandibular shafts and the maxillae, although of the permanent type, are very weakly sclerotised. These combined features confirm that the specimen is one of the juveniles collected one year after the original specimen.

Our newly reported specimens from Porto Santo (Madeira Islands) and Gran Canaria (Canary Islands) are more mature than the originally described D. madeirensis specimens, as obvious from the better developed branchiae and later origin of subacicular hooks. Although this complicates the comparison of the two groups of specimens, their unifying characteristics are that their anterior parapodia have pseudocompound hooks with a short bidentate appendage having a long terminal tooth and pointed hoods ( Fig. 9 View FIGURE 9 C–E), and branchiae with a slender branchial stem and long slender filaments ( Fig 9 View FIGURE 9 B). We think it is justifiable that they represent the same species, D. madeirensis , the only Diopatra species (besides the indeterminable D. brevicirris ) described from Madeira. Diopatra madeirensis resembles D. marocensis which most likely also occurs on Madeira. However, the two species can be easily distinguished in that the dorsal colour pattern of the former consists only of lateral brown spots ( Fig. 7 View FIGURE 7 A) while the latter has a complex colour pattern ( Fig. 12 View FIGURE 12 A). Other morphological characteristics that differentiate D. madeirensis from D. marocensis and the other Macaronesian species have been detailed in Table 1.

Biology. One of the specimens from Gran Canaria ( MNCN) was found with eggs of different sizes suspended in the coelom. Whilst the smaller ones had attached strings of nurse cells, those measuring about 200 µm in diameter had lost theirs already, indicating that they had reached full size. This relatively small egg size is indicative of broadcast spawning rather than brooding, which is the strategy of D. marocensis ( Arias et al. 2013) . 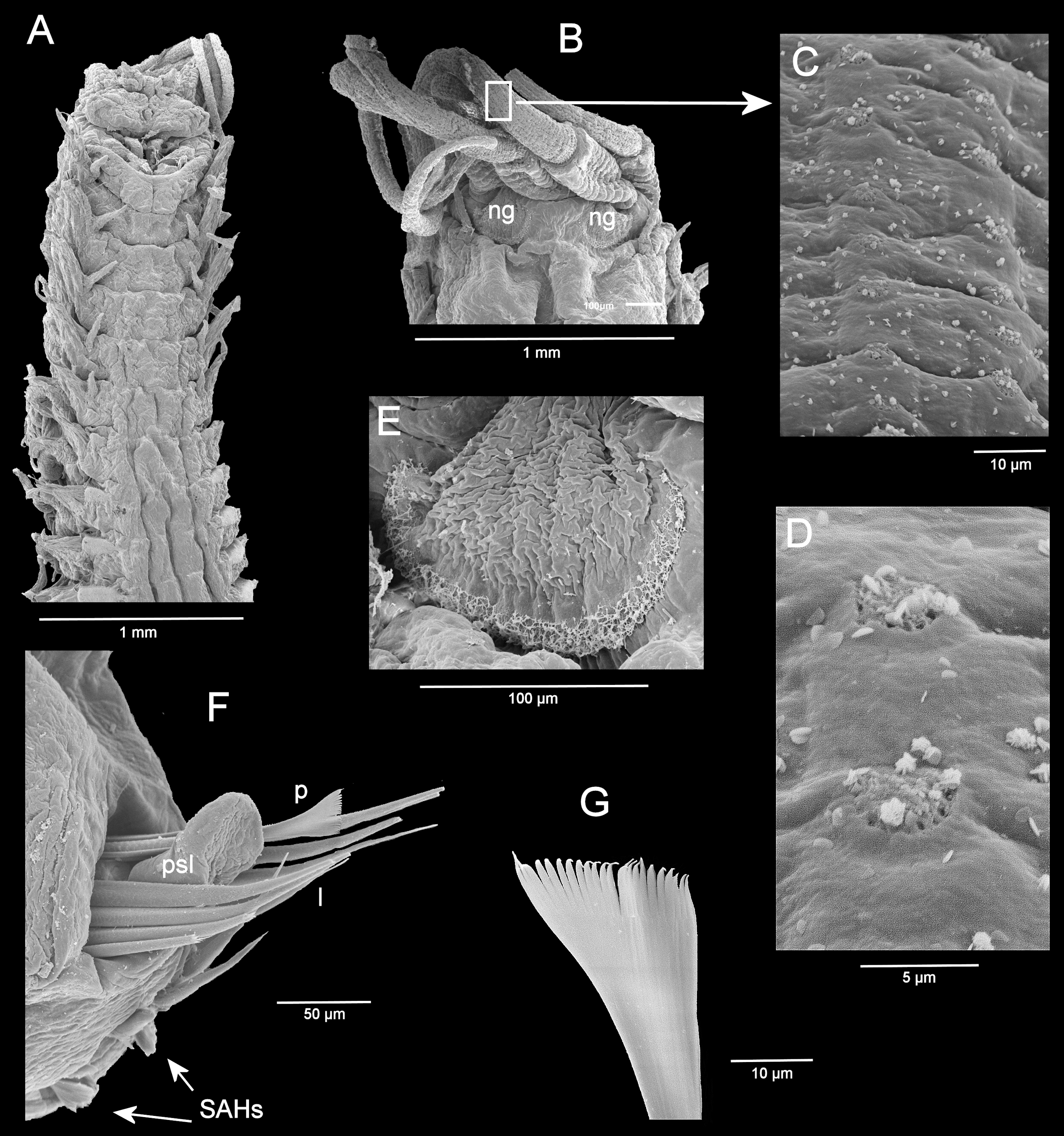