This new species is most similar to Nicotiana obliqua   , but it differs in having a shorter, symmetrical floral tube with four stamens located at the mouth of the floral tube rather than the stamens didynamous with the floral tube oblique (longer on the top side than on the lower). From N. occidentalis   , it differs in the much wider leaves and shorter floral tubes. It differs from N. hesperis   in its larger flowers with a different corolla shape, longer stamens and much narrower leaves.

DESCRIPTION. Erect, herbaceous, annual herbs, to 1.5 m tall, forming a loose rosette with many leaves, 1(−2–3) main stem, with several large leaves and large side branches in the basal half of the stems, sparsely branched in the upper half. Basal and lower-most leaves with slightly winged petioles, up to 2.8 near the leaf lamina and much narrower toward the stem, base gradually attenuate, apex blunt to acute, leaves on stem with a broadly winged petiole and an auriculate base, apex acute to acuminate, becoming much narrower further up and bract-like, blades 1.1–8.0 × 3.6–20.2 cm (including petiole), ovate-elliptical, widest near the middle, margins entire, undulate, ciliate. Vestiture on stem bases composed of dense, long, straight hairs with a small glandular tip, upper stems and leaves densely covered with short and long, large gland-tipped hairs, peduncle mostly with short hairs and a few longer hairs, both with large glands, calyx ribs densely covered with the same short hairs as the peduncle, floral tube exterior densely covered with short, gland-tipped hairs. Inflorescence bracts sessile, linear, c. 0.5–1.8 cm long, the apex acuminate. Calyx 1.2–1.4 × 0.15–0.20 cm, one slightly longer and one shorter, with hyaline margins, apex acuminate, apices flared, slightly larger in fruit, 0.2 cm longer than the fruit. Corolla tube 0.7–1.2 cm long (from end of the calyx), 0.2–0.3 in diameter, with a stamen boss, the limb 1.3–2.4 cm across, the lobes deeply cleft, 0.4 cm, sinus 0.5 sometimes with a slight apiculum; stamens four, at the mouth of the floral tube and a fifth 0.4–0.6 cm further down the tube. Fruit a dry capsule splitting in four lobes, typically surrounded by the persistent calyx with flaring apices. Chromosome number: n = 21 ( Chase et al., 2021).

DISTRIBUTION. Nicotiana insecticida   is one of the more widespread members of the occidentalis   complex and ranges from near the Indian Ocean in north-western Western Australia to central portions of the Northern Territory, mostly north of the Tropic of Capricorn. Its range abuts south of the Tropic that of the equally widespread N. obliqua   .

HABITAT AND ECOLOGY. There is wide variation in the conditions across the wide range of Nicotiana insecticida   (http://www.bom.gov.au/). Rain is generally lower in the winter months (April–September), but appears to lead to germination of this species. Mean annual rainfall is mostly in the 200–350 mm range. Mean temperature in the summer months is 30–35° C, and the winter temperature averages 6–10° C, but can drop to 0° C in July and August, especially in central Northern Territory, where frosts often occur, thanks to the high elevation.

The species often grows in the shade of mulga ( Acacia aneura   ) or gum trees ( Eucalyptus   ), but sometimes also under other kinds of trees or on the shady sides of rocks or buildings or in caverns and cave mouths. It appears to grazed by animals that we think are mostly cattle, which may be problematic for the species survival where stocking rates are too high. That said, the species benefits from a small amount of disturbance and dislikes competition, so it may benefit from moderate trampling.

PHENOLOGY. The area where Nicotiana insecticida   occurs lies mostly in the summer monsoon zone, when the greatest amount of rain falls, but it is far enough south that some rain also occurs in the winter months. Our collections of this species at the height of its flowering were made in late winter to spring, August to September, but other collections have been as late as November. Thus, it appears that the summer rains do not typically initiate germination.

ETYMOLOGY. From the Latin for insect killer, a reference to this species killing numerous small insects with its extremely sticky hairs covering all parts of these plants. 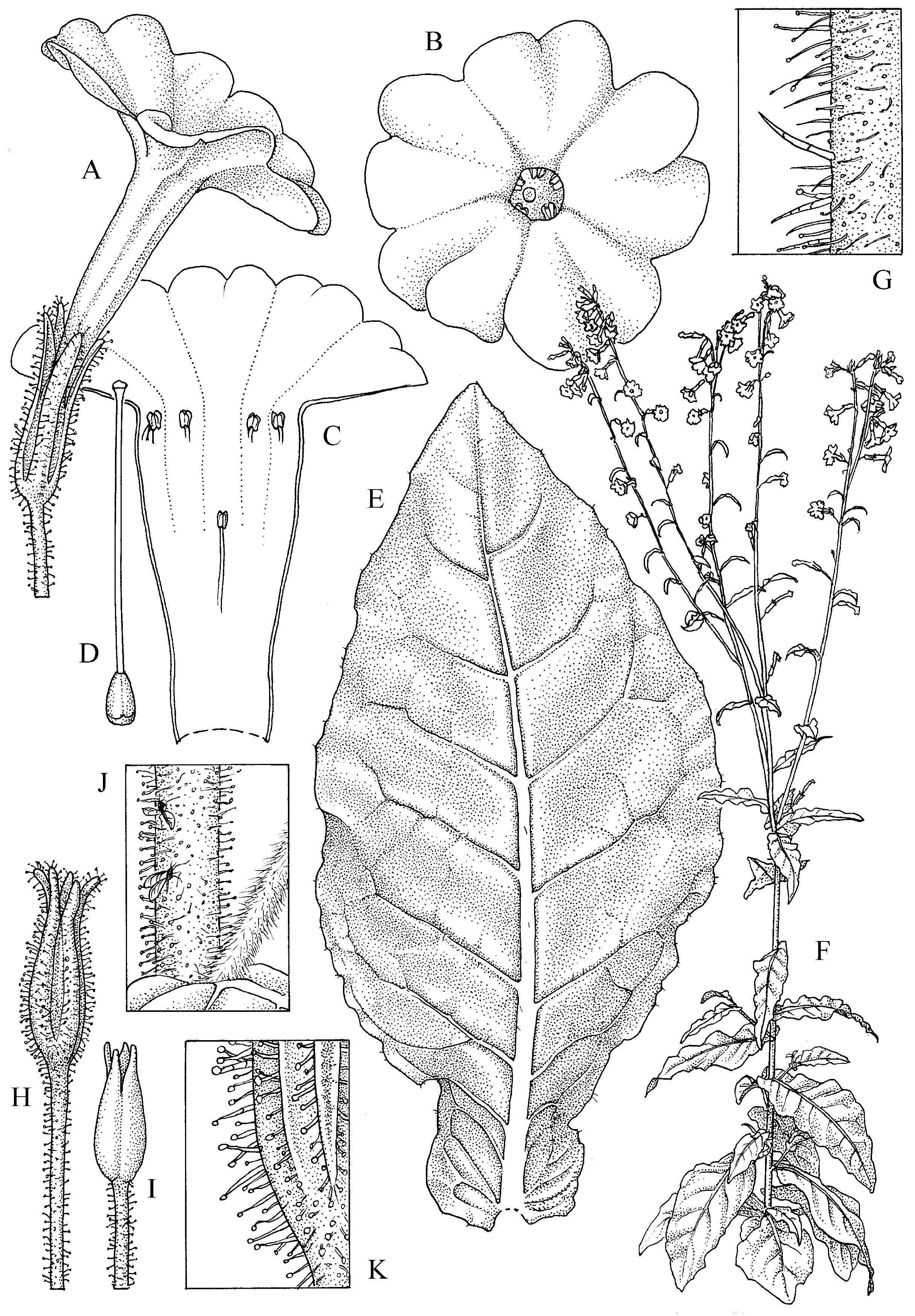