Diagnosis of female. Female sex (previously unknown) may be distinguished from all other species bearing two lobes on the caudal margin of S-VII and 28 or fewer ctenidia in the pronotal comb by the very broad and rounded lobes of the S-VII ( Fig. 14View Figure 14-16). Most similar to P. vauceli Klein, 1965  in appearance of the spermatheca (distinctly longer that wide), but the two differ in the shape of the bursa copulatrix and perula. The caudal margin of the bursa copulatrix of P. raxworthyi  is symmetrically curved from base to perula and the sclerotized dorsal portion of perula is elongated ( Fig. 16View Figure 14-16).

Description of female. Unless otherwise stated, the female characters of P. raxworthyi  do not differ from those of P. madagascarensis  described above. Head ( Fig. 14View Figure 14-16). Distance from frontal tubercle to oral angle less than from oral angle to base of first genal spine. Thorax. Pronotal ctenidia with 25 spines. Mesepisternum with only two small setae. Metepimeron with one seta in front anterior row. Legs. Same as P. madagascarensis  . Unmodified Abdominal Segments. Sternites III-VI with 4 stout setae in main rows. Modified Abdominal Segments ( Figs. 15-16View Figure 14-16). Antesensilial bristles 3; lateral and mesal bristles nearly as long as middle bristle. Only 3 setae on mesal surface of T-VIII. Caudal margin of S-VII with broad dorsal lobe subtended by sinus and much larger ventral lobe (length 2× maximum width).

Remarks. Paractenopsyllus raxworthyi  was known only from two males collected from Tenrec ecaudatus (Schreber, 1777)  and Microgale brevicaudata G. Grandidier, 1899  from Antisiranana Province (Duchemin and Ratovonjato 2004). Our sole female specimen may prove to belong to another yet undescribed species, but we base our association of this female with that of the male sex of P. raxworthyi  on the following criteria: 1, both specimens were collected in the same season (26 October, ♀, and 11 November, 3), 2, both collected within the same narrow range of elevation (600-900 m), 3, both collected from the same host species (no other Paractenopsyllus  species has ever been collected from this host species), and 4, the species is noticeably smaller than all other known species within the genus with the exception of P. duplantieri  and P. juliamarinus  . The length to width ratio of the bulga of the spermatheca of P. raxworthyi  differs from the latter two species. Each of our specimens collected from a different specimen of M. drouhardi  represent a new host record. DNA analysis was completed for the male for another study and is mentioned only for identification purposes. DNA analysis of both the male and female would have alleviated any doubt as to the identity of the female as P. raxworthyi  . Unfortunately, the female was mounted on a glass slide before the authors realized its herein applied association with that of the P. raxworthyi  male. 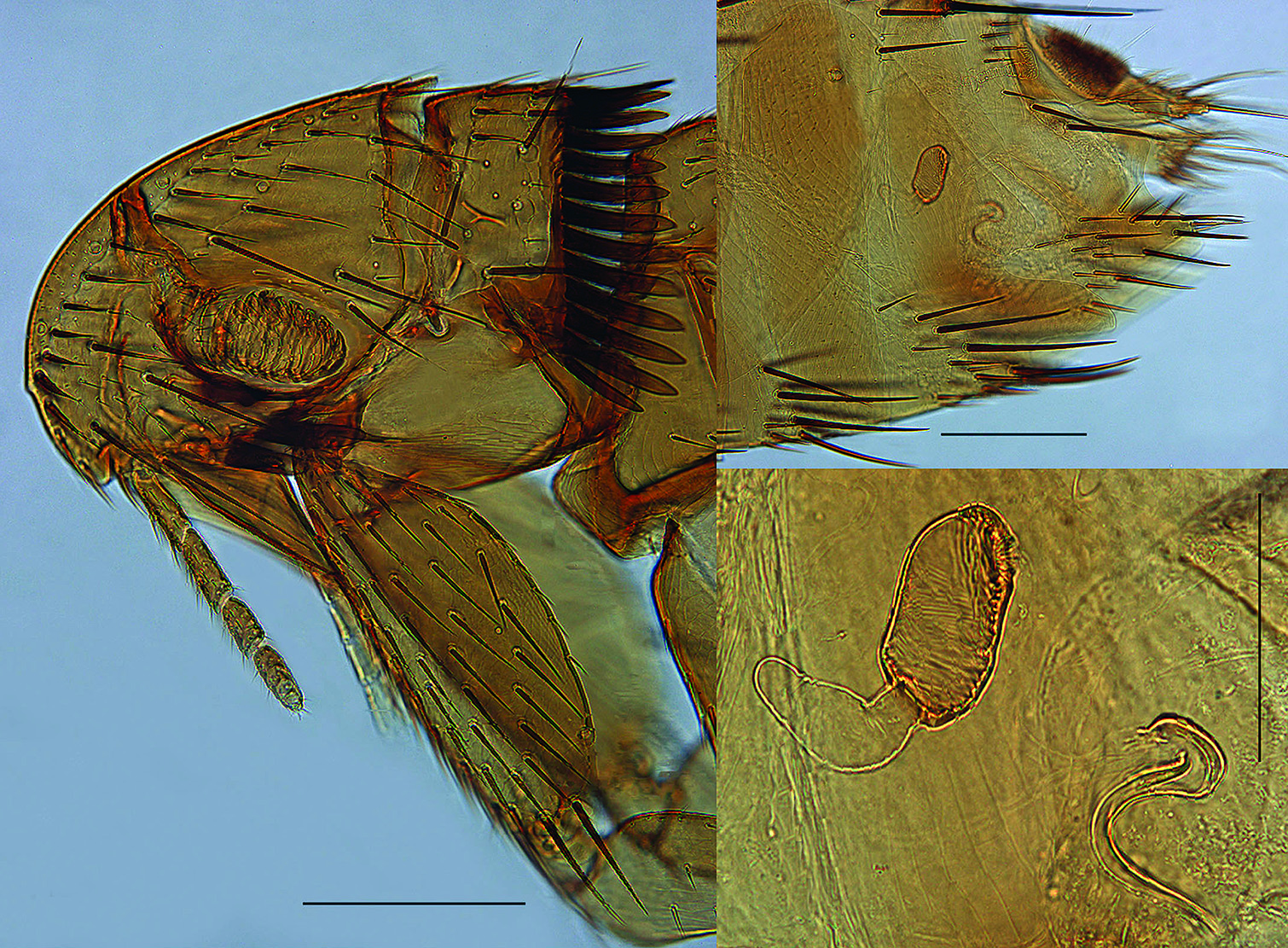 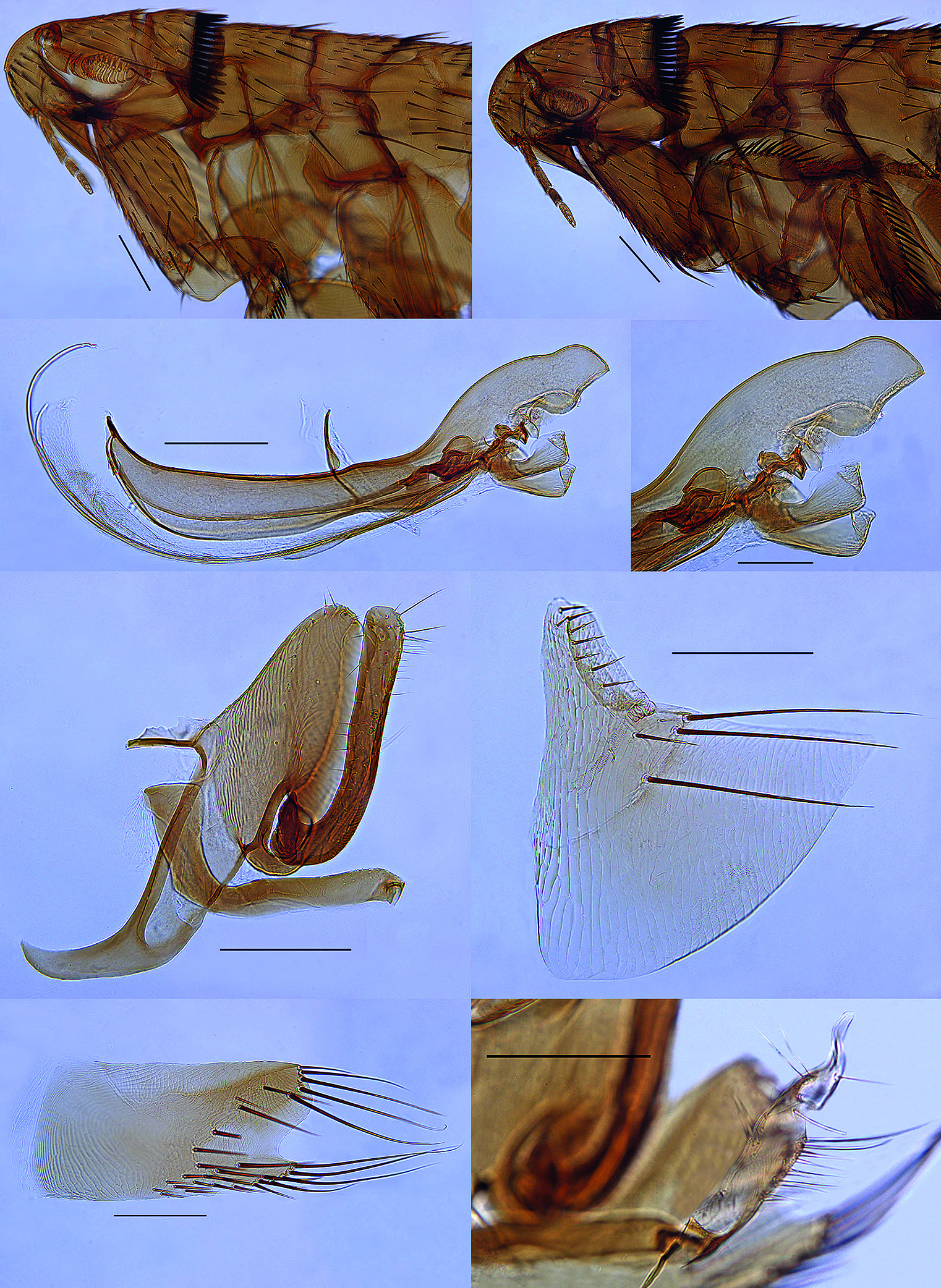