A species of Gonolobus phenetically similar and probably related to G. erianthus Decaisne (1844: 592) , a taxon that grows at higher elevations of (200–)900–1300(–1600) m in central Mexico south to Nicaragua in cloud forests, whereas the new species grows in lowland, seasonally dry forests at 10– 100 m. Furthermore, G. caamalii has oblong to oblong elliptic, narrower (3.0–3.2 times longer than wide) corolla lobes whereas they are proportionally wider (1.7–1.9 times longer than wide) in G. erianthus . Live flowers have strikingly different color patterns as G. caamalii has dark yellow green corolla lobes with a dark purple (almost black) longitudinal, callose band along the proximal 2/3 on the right side of the lobes whereas this band is absent or pale yellow, slightly evident in G. erianthus . The new species exhibits a 1.1–1.3 mm broad, annular, continuous dark purple-black band, the faucal annulus, surrounding the gynostemium and corona at the base of the corolla lobes. This band is narrower and either absent or pale green in G. erianthus .

Apparently, Gonolobus caamalii is an extremely rare species, having been found only four times at four different localities. At the type locality in northern Yucatán, we were able to record about 20 individuals on a dirt road along a span of 3–4 kilometers. Only a few specimens were in flower at any given time during the two visits we made at the locality. This population is severely threatened because of the imminent urban expansion of Valladolid, a medium sized city that is about 4 km south, and which is growing fast. The population SW of Abalá is severely threatened because of the expansion of cattle pastures and it is expected to disappear in the near future. The same applies to the Tinum locality. The population at the Helen Moyers Biocultural Reserve at Rancho Kiuic is protected and it is at this locality where the best survival expectations for the species are met. Because the species is rare, both its EOO and AOO are small, only occurs naturally in nearly undisturbed vegetation, and most of its known populations occur in areas where the original vegetation is currently being or is likely to be substituted by anthropogenic ecosystems during the next few years, we propose the species to be treated as Endangered (EN).

Eponymy: Named after Miguel Ángel Caamal Dzul, of Chan Yokdzonot 2, Yucatán, who collected for the second time this interesting species. He has a keen eye for rare plants and enthusiastically collects, cultivates, and photographs the native flora.

Notes:— Gonolobus caamalii is similar and putatively related to G. erianthus , yet both taxa are amply different in several relevant aspects. Both species have green corollas with reticulate nerving of relatively similar shapes and with one of the margins crenulate, a yellow corona, and reddish anther appendages. However, our new taxon is a lowland species occurring at elevations of 10–100 m in tropical dry forests whereas G. erianthus grows at higher elevations of (200–)900–1300(–1600) m in central Mexico south to Nicaragua in tropical humid to cloud forests. The corollas of both species, albeit relatively similar, are readily diagnosed. In G. caamalii , the corolla lobes are asymmetrically oblong to oblong elliptic, 15–18 × 4.7–6 mm and relatively narrow (3.0–3.2 times longer than wide). On the other hand, G. erianthus features asymmetrically elliptic corolla lobes 15–23 × 9–12 mm that are proportionally wider (1.67–1.9 times longer than wide). Moreover, the color patterns of live flowers (even somewhat noticeable in pressed material) are unmistakable. Gonolobus caamalii has dark yellow green corolla lobes that feature a dark purple (almost black) longitudinal, callose band along the proximal 2/3 on the right side of the lobes; this band is absent, or it is yellow and only slightly evident in G. erianthus . In addition, there is 1.1–1.3 mm broad, annular, continuous dark purpleblack band surrounding the gynostemium and corona at the base of the corolla lobes. This band is narrower and either absent or dark green in G. erianthus . Gonolobus caamalii is fairly distinctive in possessing a very dark, almost black brownish purple, callose longitudinal band parallel to the right margin of the petals and in the fact that the petals are sharply tilted dextrogyrously forming an angle of 30–35° to the general axis of the flower. In Stevens (2010) useful key to the Mesoamerican Gonolobus , G. caamalii would key out to couplet 36b because of its abaxially moderately pubescent corolla of 15–18 mm long, its uniformly pubescent internodes, and the anther appendages lacking 2 distinct lobes or “arms”. Then, it would key out to G. erianthus in couplet 37a. However, G. caamalii is sharply distinct from G. erianthus (a species ranging widely from Nuevo León and Nayarit, Mexico, to Nicaragua) in several respects as discussed above. In the YPBP, it is difficult to confuse it with any other species.

The northern portion of the YPBP seems to be a center of endemism for the Gonolobinae with at least 10 species restricted to this area, including Gonolobus caamalii and the recently described Matelea falcata Juárez-Jaimes et al. (2021: 113) . It seems likely that several other novelties are yet to be discovered in this area. Most of these endemic Gonolobinae consist of small populations, most likely threatened, surviving in remnants of the once extensive semideciduous forests that covered the Yucatan Peninsula before pervasive “slash and burn” agriculture removed most of them.

Gonolobus stenanthus subsp. yucatanensis has been collected near and at the type locality of G. caamalii . For example, G. Carnevali et al. 8377 (CICY, CHIP, CIQR, F, FCME, G, GH, MEXU, MO, SEL, UADY, UCAM, UJAT, XAL; Fig. 3I View FIGURE 3 ) was collected less than 4.5 km to the NW whereas C.L. Lundell & A.A. Lundell 7577 (GH, MEXU, MICH) was collected 41 km E of the type collection of G. caamalii . More recently, M.A. Caamal 01 (CICY; Fig. 3H View FIGURE 3 ) was collected a few hundred meters for the type locality. Thus, it is evident that both species are sympatric or parapatric in the area. However, there is no morphological evidence of gene flow between the two very distinct Gonolobus species. Aside from possible morphological or genetic barriers to gene flow between both taxa, G. stenanthus subsp. yucatanensis flowers at the end of the dry season or beginning of the rainy season (April-July) whereas G. caamalii , at least under natural conditions, blooms toward the end of the rainy season (October-November) providing an additional prezygotic barrier to gene exchange. 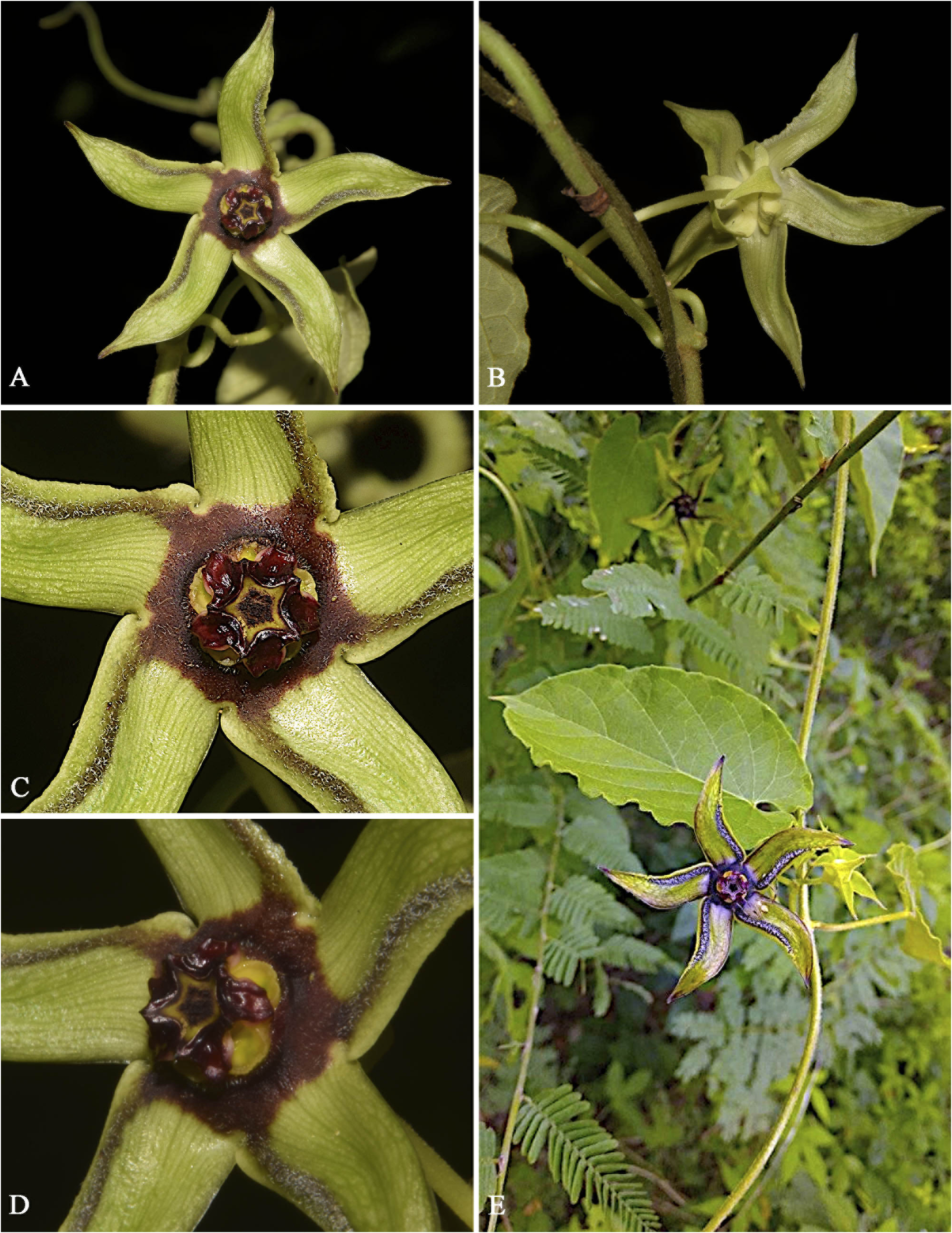 FIGURE 4. Gonolobus caamalii Carnevali & R. Duno.A. Frontal view of the flower in anthesis. B. Posterior view of the flower featuring the reflexed calyx. C. Close up of the center of the flower with the gynostemium. Note the dark rim of the gynostemium head, the dark wine color of the anther appendages and the margins of the bright yellow green corona. Also, note the line of trichomes along the right margin of each corolla lobe as well as the reddish-brown band around the corona at the base of the corolla lobes. D. ¾ view of the center of the flower featuring the corona lobes. E. Flowering plant at the type locality.All based upon the type collection (G. Carnevali, R. Duno & M.A. Caamal Dzul 8573, CICY, GH, MEXU, MO). 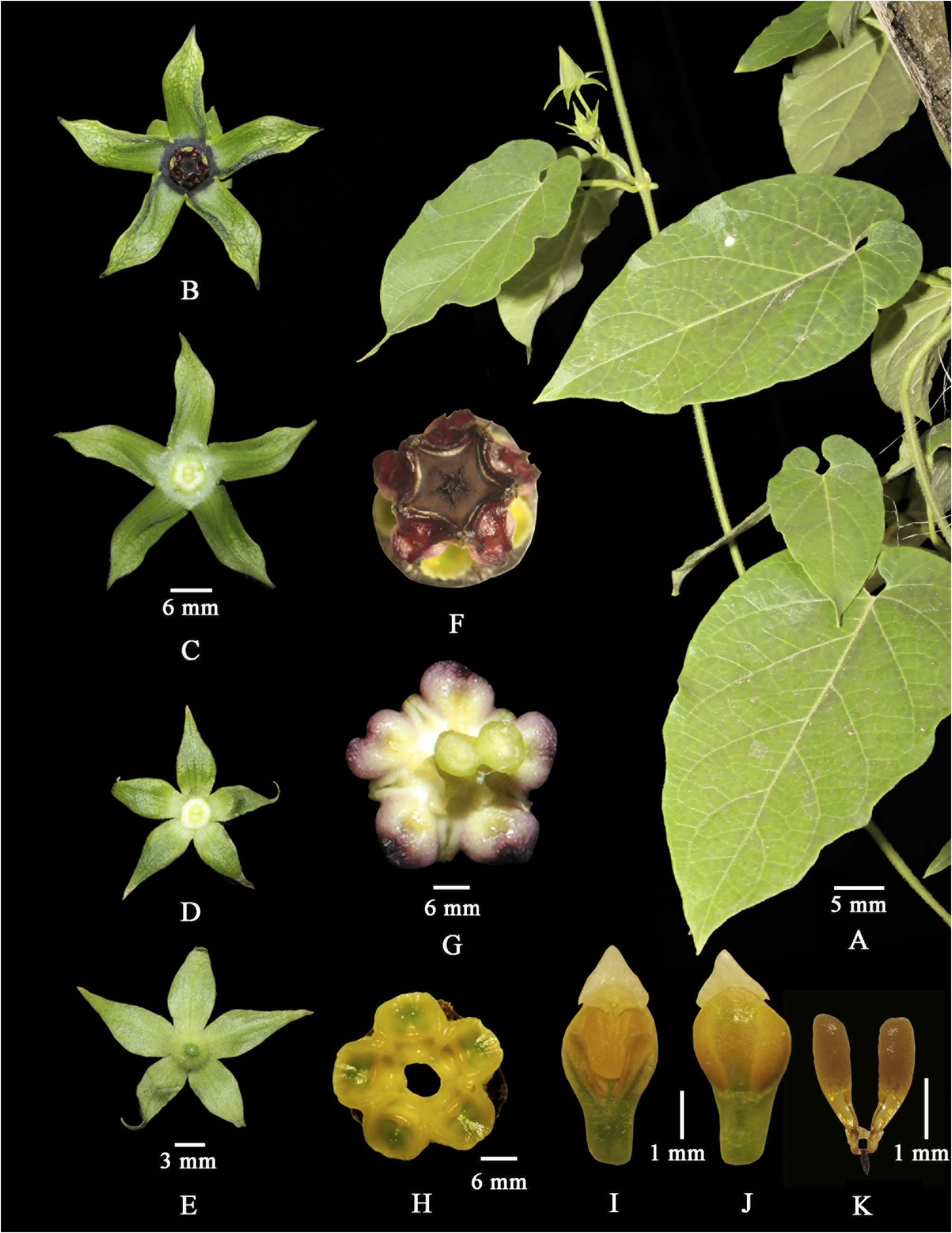