Body strongly flattened dorso-ventrally ( Fig. 26 View FIGURES 26 – 28 ), elongate, parallel-sided, narrowed posteriorly from abdominal segment VI, spiracles of eighth pair form posterior tip of body, triangular in shape (Figs 9, 10, 13, 14, 27, 28, 35, 36). Segments of thorax and abdomen are transverse. Pronotum is with broadly rounded lateral margin, without lateral scoli. Meso- and metanotum are approximately as wide as or slightly narrower than pronotum, each with a pair of lateral scoli. Abdominal segments are as wide as segments of thorax, gradually narrowed posteriorly from segment VI. Abdominal segments I –VIII on each side with one lateral scolus.

Pronotum with 15 pointed setae and three campaniform sensilla on each side ( Fig. 13 View FIGURE 13 ). Anterior border of meso- and metanotum with two pairs of very minute setae. Moreover, meso- and metanotum with one seta on each side antero-laterally (close to plical area), two setae at the base of scoli, one seta on each postero-lateral side (seta visible from dorsal and ventral side), and row of 10 setae and two campaniform sensilla placed posteriorly. One seta on each thoracic scolus dorsally. Anterior border of I –VII abdominal segments with two pairs of minute setae. Dorsal side of abdominal segments I –VII with two pairs of setae close to anterior margin medially, row of four setae and two campaniform sensilla postero-medially, and two setae on each side close to spiracle. One seta on abdominal scoli 1–8 dorsally. The last abdominal segment different in shape from the remaining ones, with elongated spiracles placed very close to each other. The last segment with two pairs of minute setae at anterior border, a pair of setae anteriorly in the middle and two setae on each side at the base of lateral scolus. Spiracles of eighth pair not distinctly bordered from eighth abdominal segment, forming triangular posterior tip of body. Body tip with 16 setae placed dorsally and eight on lateral side (visible from dorsal and ventral side). Chaetotaxy of dorsal side of body as in Figure 13 View FIGURE 13 .

Stemmata black, five on each side of head.

Prothorax with two small processes on each lateral margin. Each process apically armed with seta. Meso- and metathorax without lateral scoli.

Each abdominal segment with a pair of spiracles. Spiracles of first four segments of similar diameter. Spiracles of segments VI –VIII with slightly smaller diameter than those on segments I –IV. Spiracles of the segment V most prominent, elongated into cylindrical appendage (respiratory horns) with elongate-oval outer spiracular opening ( Figs 8 View FIGURES 1 – 8 , 11, 12, 46, 49, 54, 55).

Ch. thailandica   larva is slightly longer than Ch. picea   (length 5.0 mm, n= 1; to length 4.2, 4.4 mm, n= 2 respectively). Body of mature larva of both species is elongate and strongly flattened dorso-ventrally but in Ch. picea   it is slightly widened in abdominal part (the widest across abdominal segment IV) while in Ch. thailandica   almost parallel-sided and narrowed posteriorly from abdominal segment VI.

Spiracles of 8 th pair in both species form triangular tip of body but the tip of Ch. thailandica   is distinctly broader than that of Ch. picea   .

Chaetotaxy of head and ventral side of body of both species is identical. Chaetotaxy of dorsal side of body is also very similar, however, Ch. thailandica   has 15 setae on the pronotum, while Ch. picea   has 17 setae. Differences are also visible in the number of setae on the tip of body (8 th pair of spiracles): in Ch. picea   there are four setae dorsally and two ventrally, in Ch. thailandica   16 setae dorsally, 10 ventrally, and 8 on sides.

The differences in mouth parts are visible in mandibles and the maxillo-labial complex. Mandibles of both species possess three teeth but Ch. thailandica   has a distinctly sclerotised margin above teeth which is absent in Ch. picea   . The mala of Ch. thailandica   has more numerous long spinules on dorsal side than the mala of Ch. picea   . The prementum of Ch. picea   has no tubercles while Ch. thailandica   has two distinct tubercles, each with a peg-like sensillum at the apex. The tubercles are placed in area where labial palpi occur in other species. This character is very interesting, because adults of species belonging to the genus Chaeridiona   are distinguished from the genera Prionispa   and Oncocephala   by the absence of labial palpi.

Habitat and biological notes. The larvae of Ch. thailandica   were found mining in the leaves of four species of Zingiberaceae   growing on the forest floor. One species was Boesenbergia rotunda   , the remaining three belonged to the genus Zingiber   . There were no feeding marks on the leaves of other ginger species occurring in the same habitat, namely Globba bulbifera   , G. pendula   , Curcuma bicolor   , C. roscoeana   and C. rubrobracteata   . Leaves of Hedychium coronarium   , a ginger species cultivated in gardens in the study area also showed no traces of leaf-mining beetle larvae.

In ginger species forming tall stems the larvae fed in the lower, smaller leaves ( Figs 1, 3 View FIGURES 1 – 8 ). In ginger species with narrow leaves there was usually one larva per leaf, sometimes up to three. In the large, oval leaves of Boesenbergia rotunda   one to five larvae were found in a single leaf. Each larva of Ch. thailandica   mined in its own feeding area. The feeding areas were usually oblong, close to the mid-rib and located in the basal third of a leaf ( Fig. 3 View FIGURES 1 – 8 ).

In pupae submerged in water the outer spiracular openings of the abdominal segment V were covered with an air sheath.

Mature larvae broke upwards through the leaf tissue and walked on the upper side of the leaf down to the mid-rib. Subsequently, they bore into the mid-rib with head oriented towards the stem of the plant ( Fig. 6 View FIGURES 1 – 8 ). In the mid-rib the larvae pupated after a few days. The pupae were usually hiding in their pupal chambers, but sometimes the apical part of the abdomen including the two spiracular horns could be seen at the entrance of the pupal chamber ( Figs 7, 8 View FIGURES 1 – 8 ).

Immatures of Ch. thailandica   possess some characters which seem to be adaptations for living inside leaves. The larvae of Ch. thailandica   sometimes push their apical plates upwards, thus piercing the leaf tissue in order to deposit their faeces on the upper surface of the leaf. This behaviour has never been reported for any other hispine beetles.

Another conspicuous behaviour is the pupation in the mid-rib of a ginger leaf. A similar behaviour was mentioned by Kalshoven (1957) in Prionispa fulvicollis   . The adaptive advantage of boring into the stem is possibly protection against predators and parasitoids. The pupal chamber is safer than the perforated leaf with the conspicuous feeding marks, particularly because the pupa can close the entrance of the pupal chamber with the broadened and flat caudal end of the abdomen.

A striking morphological feature of Ch. thailandica   pupae are elongated spiracles of the 5 th abdominal segment (respiratory horns). When a pupa is submerged in water a shiny, longitudinal band can be seen on the dorsal side of each respiratory horn. The shiny band consists of a thin film of air, which is held by the hydrofuge tubercles lining the spiracular chamber. The silvery sheen was still present after 2 hours of submersion. The size and structure of the hydrofuge layer and the persistence of the shiny band indicate that the gas film serves as a permanent physical gill (=plastron) that allows diffusion of O 2 from water into the spiracles.

A number of aquatic insects have a permanent physical gill or plastron, e.g., the water bug Aphelocheirus Westwood   or the beetle Elmis Latreille ( Hinton 1976)   . The plastron is usually held by minute hydrofuge hairs covering large areas of the body surface. Most plastron breathers are limited to fast-flowing, oxygen-rich streams. Plastron breathers living in standing water, like the chrysomelid Donacia Fabricius   or various aquatic weevils, are slow-moving insects that can crawl to the water surface if oxygen levels become too low. In terrestrial environment plastrons mainly occur in the pupal or egg stages of insects living in habitats that are alternately dry and flooded., e. g. along streams ( Hinton 1961; 1968). The cuticular structures involved often consist of a dense cuticular meshwork covering the spiracular atrium and a small surrounding area (=spiracular gill) ( Hinton 1968). In many species the spiracular gills are located on appendages (spiracular horns) that are elevated above the body surface.

After heavy rain the larvae and pupae of Ch. thailandica   are sometimes temporarily submerged in water. Thanks to their spiracular gills, the pupae can remain submerged for long periods without the need to access the water surface. If necessary, i.e. after prolonged submersion, the pupa can move upwards and place the respiratory horns above or closer to the oxygen-rich water surface. In contrast to pupae the larvae apparently need more oxygen when submerged. Soon after watering them they raise their apical plates formed by last pair of spiracles towards the water surface. Insects possessing spiracular gills lack both a regulatory apparatus of the spiracles and the appropriate muscles ( Hinton 1968). Nevertheless, the water loss is kept at low levels when exposed above water, because the plastron structures covering the spiracles are very dense, sometimes forming a canopy with tiny holes ( Hinton 1968). In Ch. thailandica   the cuticular plastron structures are not as dense (the distance between the mushroom-shaped structures is larger), but the water loss can be prevented by closing the respiratory horn when exposed to the atmosphere ( Figs 54, 55 View FIGURES 50 – 55 ).

Spiracular horns have also been found on the fifth abdominal segments of pupae of other leaf-mining Cassidinae belonging to different tribes ( Świętojańska et al. 2006). They probably have the same function as the respiratory horns of Ch. thailandica   . 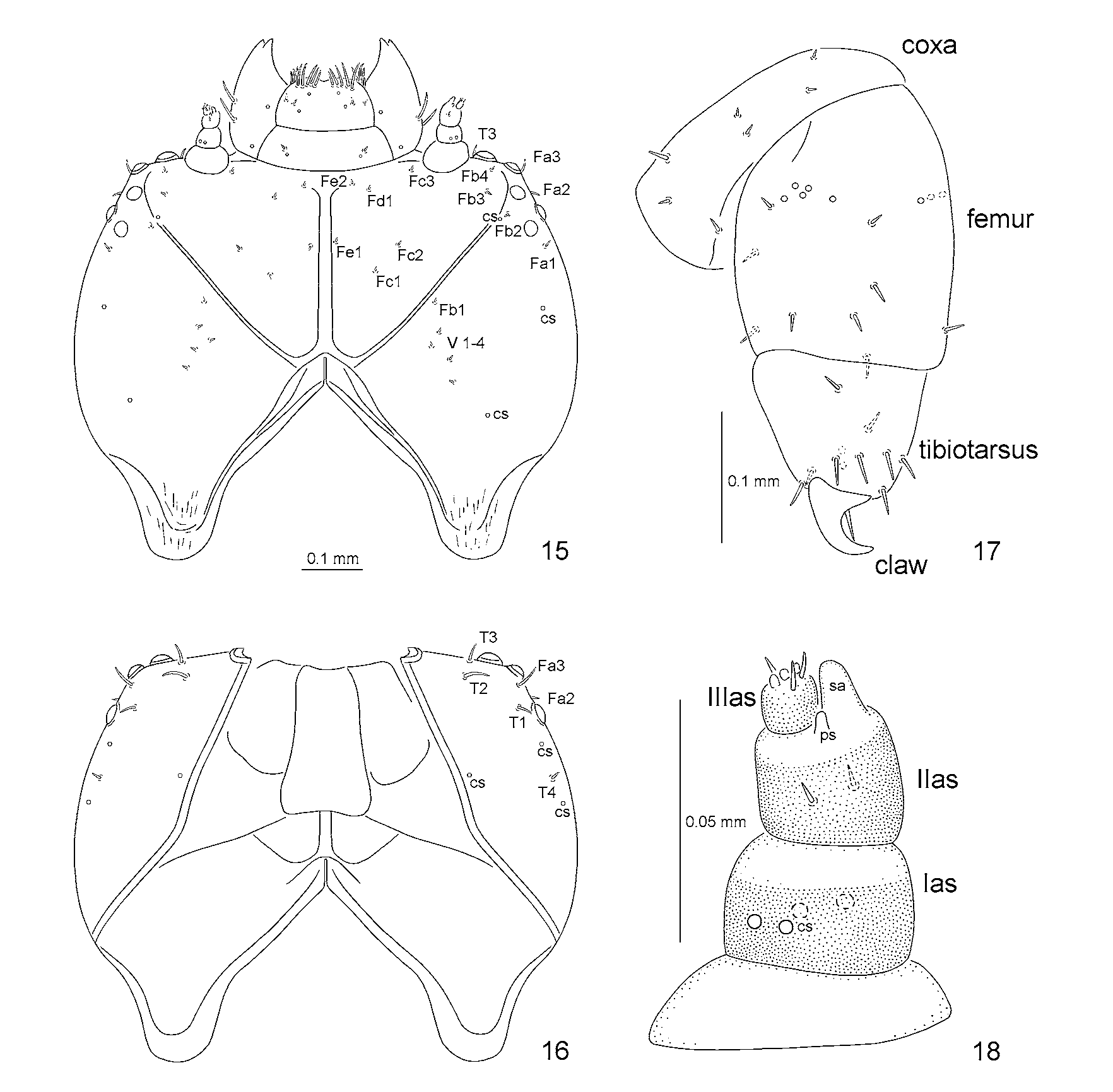 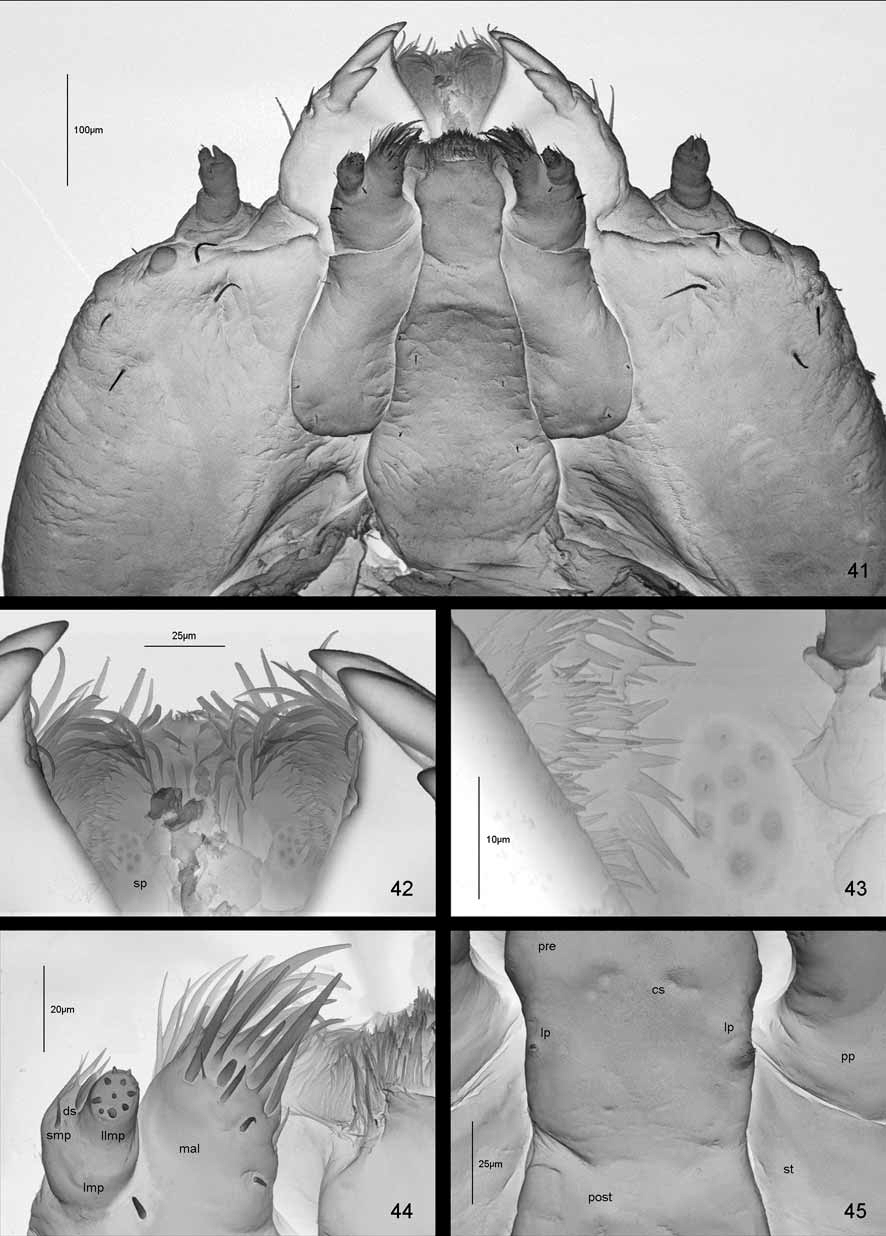 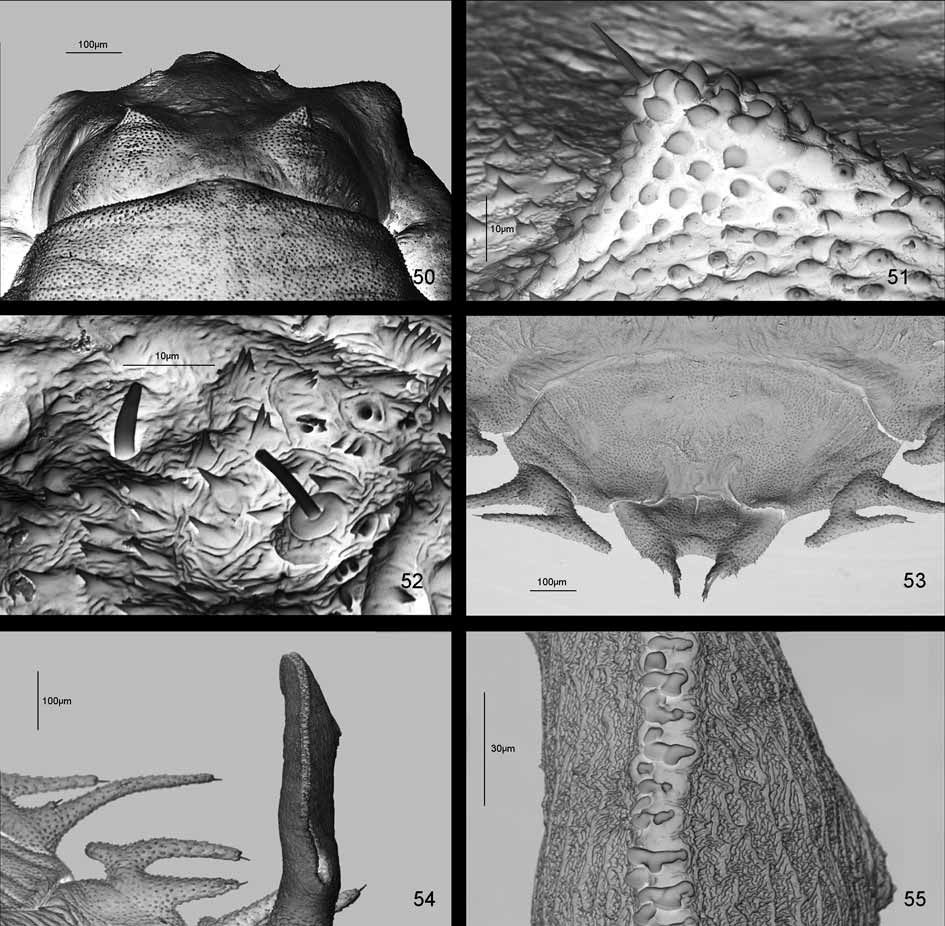